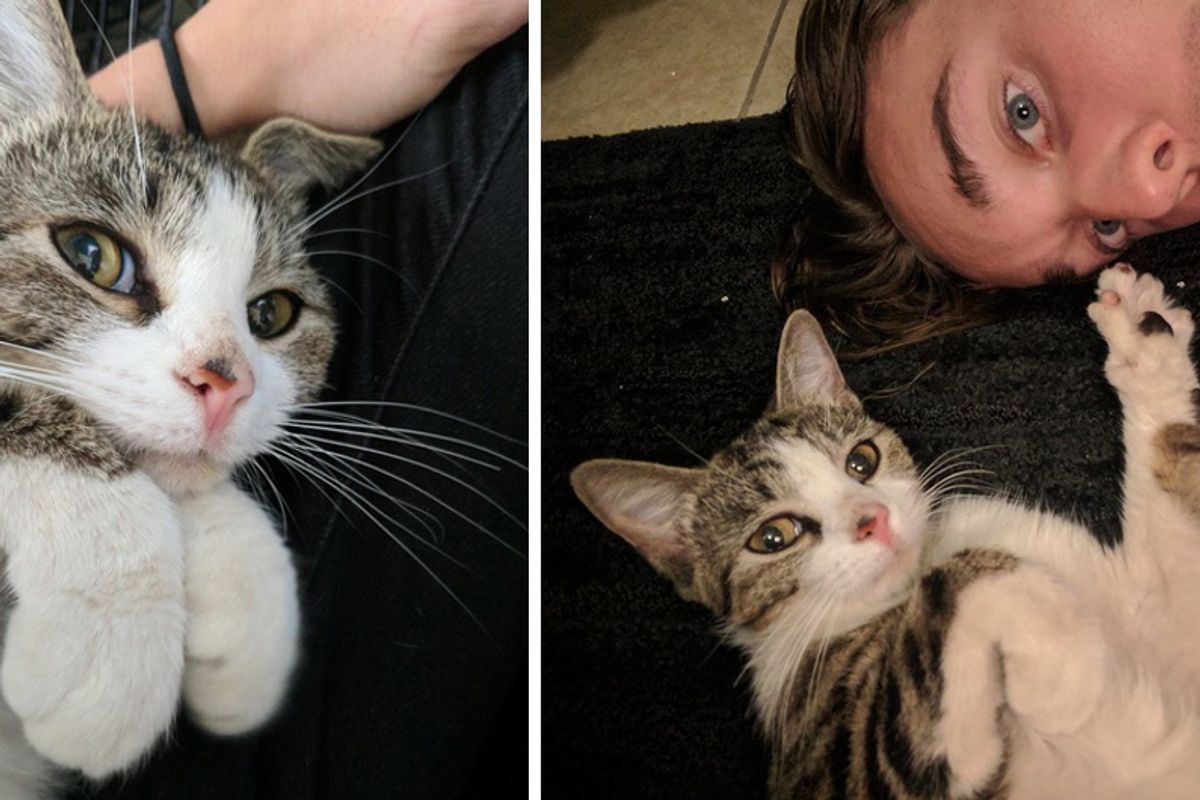 Man Captures Moments of Him Being Chosen By a Stray Cat Who Refuses to Leave Him...

Two months ago, a young man was on his way home when suddenly a little kitty appeared and started following him.

She was just skin and bones and covered in fleas. The kitty tagged along with the guy that she just befriended and wouldn't let him go.

Before their paths crossed, Connor Manning from Los Angeles had recently got out of a broken relationship. He was feeling a bit down when the kitty came to him out of nowhere and wouldn't let him go home alone.

The friendly tabby had been living on the streets for the first six months of her life before she found Connor. The guy decided to stop and hang out with the kitty despite his allergies.

As he got down to her level, the kitty rolled on her side and allowed her human friend to pet her.

Their connection was instant, and Connor was surprised by the kitty's sweetness and later her persistence to be his cat.

He named the kitty Socks, and that night she decided to follow him home.

Socks sauntered right into his abode as he opened the door.

After some exploring around the house, she started to purr and roll around the floor in pure bliss.

She didn't want to stay inside, and he had to leave for the night, so Connor made a makeshift bed on the porch, hoping she would use it and stay.

Socks quickly crept her way into his heart before he even knew it. When he returned home, he couldn't find the cat. Disappointed, he went back inside.

An hour later, he heard the tiniest and sweetest meowing coming from the porch. It was Socks calling him to open the door. Connor was overjoyed and immediately went outside to greet his "old" pal.

At that moment, he knew that he couldn't let her go.

Socks hopped in his lap and fell asleep. She showed him gratitude with loud purrs and happy kneady paws.

"I'm allergic but this is truly an odd couple sitcom moment."

The next day, he bought her food and treated her for fleas. "(I) start researching cat things because I have no idea how to cat but she loves me," Connor said via twitter.

After a trip to the vet, the 6-month-old kitten didn't have a microchip, so Connor welcomed her into his loving home. But soon his allergies started to act up.

After 24 hours, he experienced some severe allergic reactions. Connor started contemplating the option of finding Socks another home, but the tabby girl was not having it.

"How am I supposed to go to work when she has this face," Connor said.

"When a cat follows you home and you are really allergic... while you look for a home for her, you fall in love."

Socks would meow and cry if he left her in a different room. All she wanted to do was sit in his lap and fall asleep, purring.

It didn't take long until Connor realized that he could no longer part with the sweet kitty who had chosen him as her forever human and his home as hers.

He began to take allergy medicine, and after being on it for a few days, his body started to adjust to the cat.

On September 10, he announced to his friends that Socks would be staying with him forever.

"I'm keeping Socks. She already was home," Connor said. "I love her!"