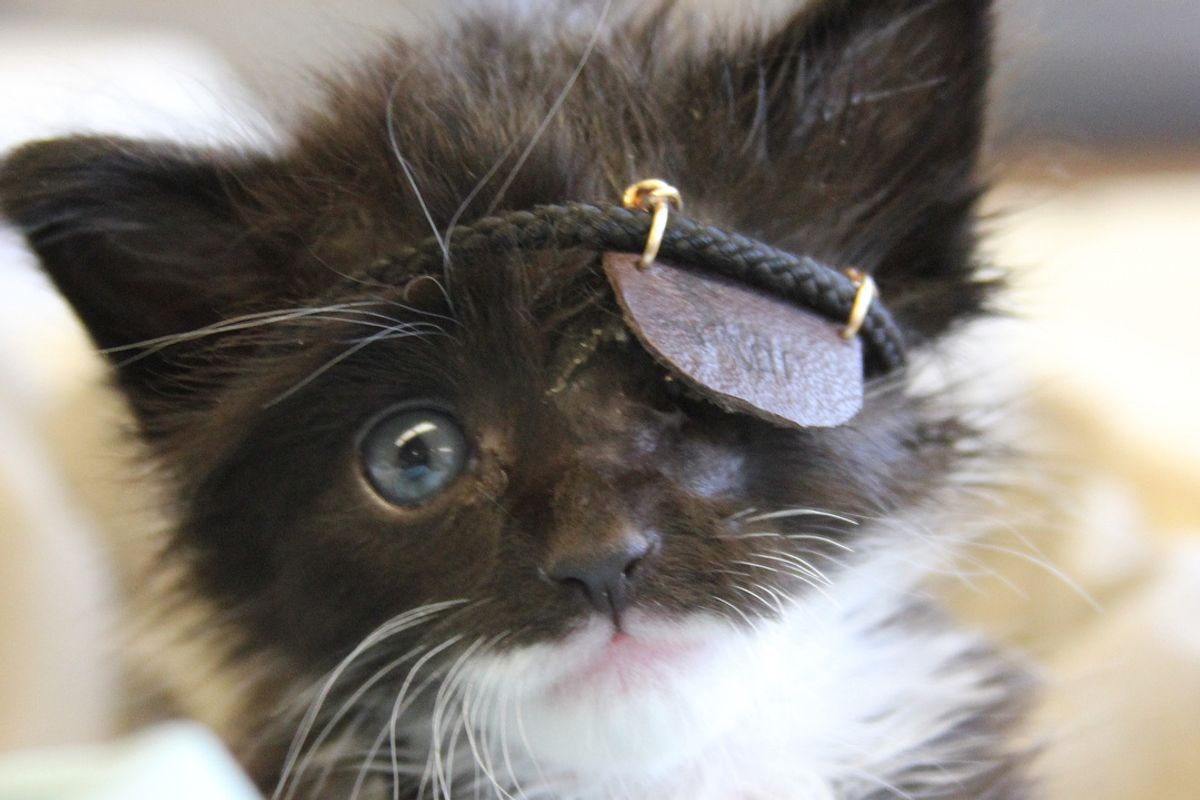 Miracle Kitten Gets Eye Patch to Help Him Heal, Now a Month After Rescue...

A tuxedo kitten lost an eye but gained a new life. He got a handcrafted eye patch to help him heal. The pirate kitty not only wears it well, but he is thriving with his new found cattitude.

Scar was found in a remote area about 2 and a half hours away from civilization. After Savannah Anas, a Marine Biologist, learned about his plight and that he "didn't have an eye", she and her best friend hit the road to the kitty's rescue. 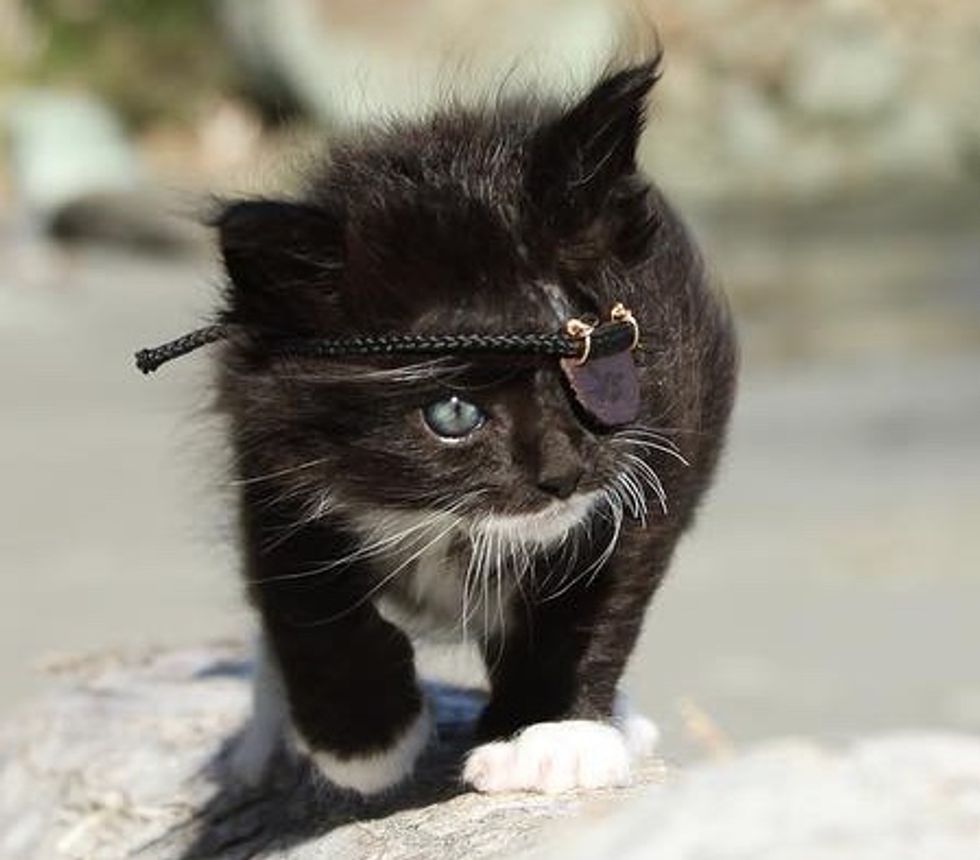 "We got there to find that he had both eyes. While one eye was completely fine, the other was so incredibly swollen and infected that it was leaking puss like a fountain at some points," Savannah told Love Meow.

They were racing against time to save the kitten as the infection was spreading closer to his brain which could be fatal. They drove three hours to get the kitty to the nearest vet, but only to receive a grim prognosis.

The kitten needed surgery immediately to remove the bad eye, but the little one was so young and tiny that the vet didn't know if he would make it through alive.

"Scar was so tiny at only two weeks old and 8.5 oz, that the doctor would not be able to hook him up with monitors, fit a breathing tube down his throat, or know how the anesthesia was affecting him during the procedure. This made it an extremely high risk surgery," Savannah told Love Meow. 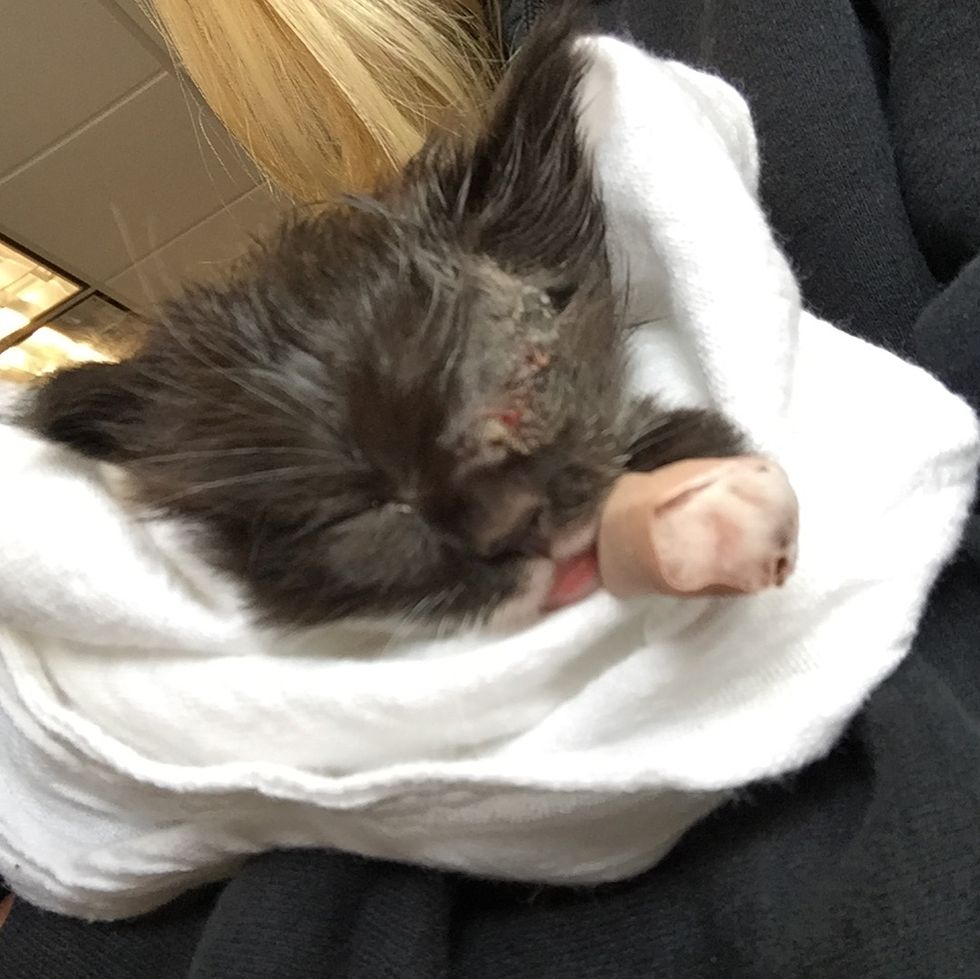 That was the only option they had to save the kitten. The vet said he had a 50/50 chance of survival with the surgery, so they went for it and fought alongside him. "He was a strong little kitten but when I dropped him off to the vets to get surgery that morning I was so afraid of losing him to the anesthetic I cried in the parking lot."

The little tuxedo pulled through triumphantly with his amazing fight to live. "The second I held him after surgery he purred for the first time." 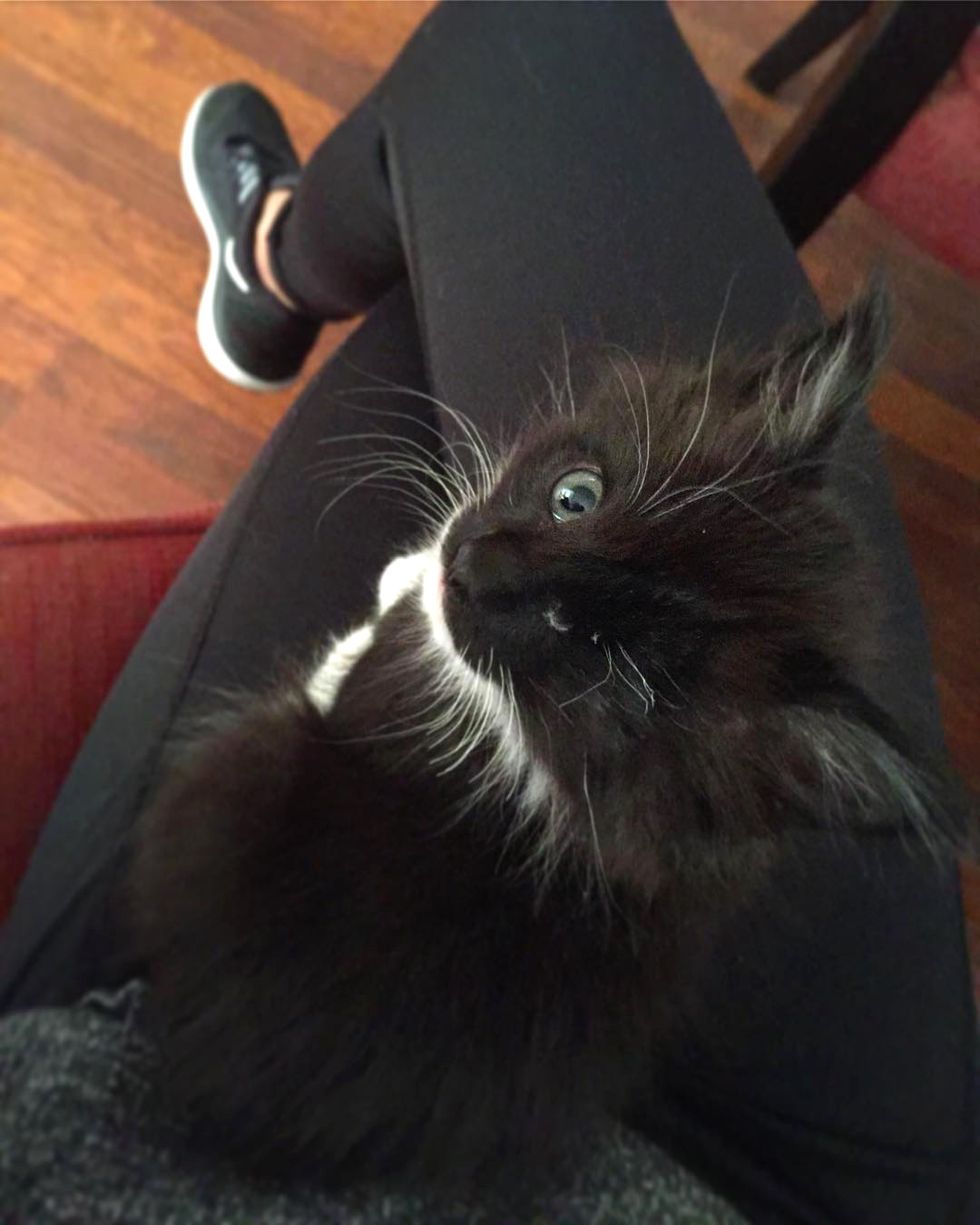 When the healing began, Scar accidentally ripped out the stitches during his deep sleep first night home, so Savannah started looking for ways to help him protect it.

"I mentioned making him an eye patch when my friend Jarrett Seiler (@jarrettjseiler) overheard me in class. He said he'd make him one," Savannah told Love Meow. 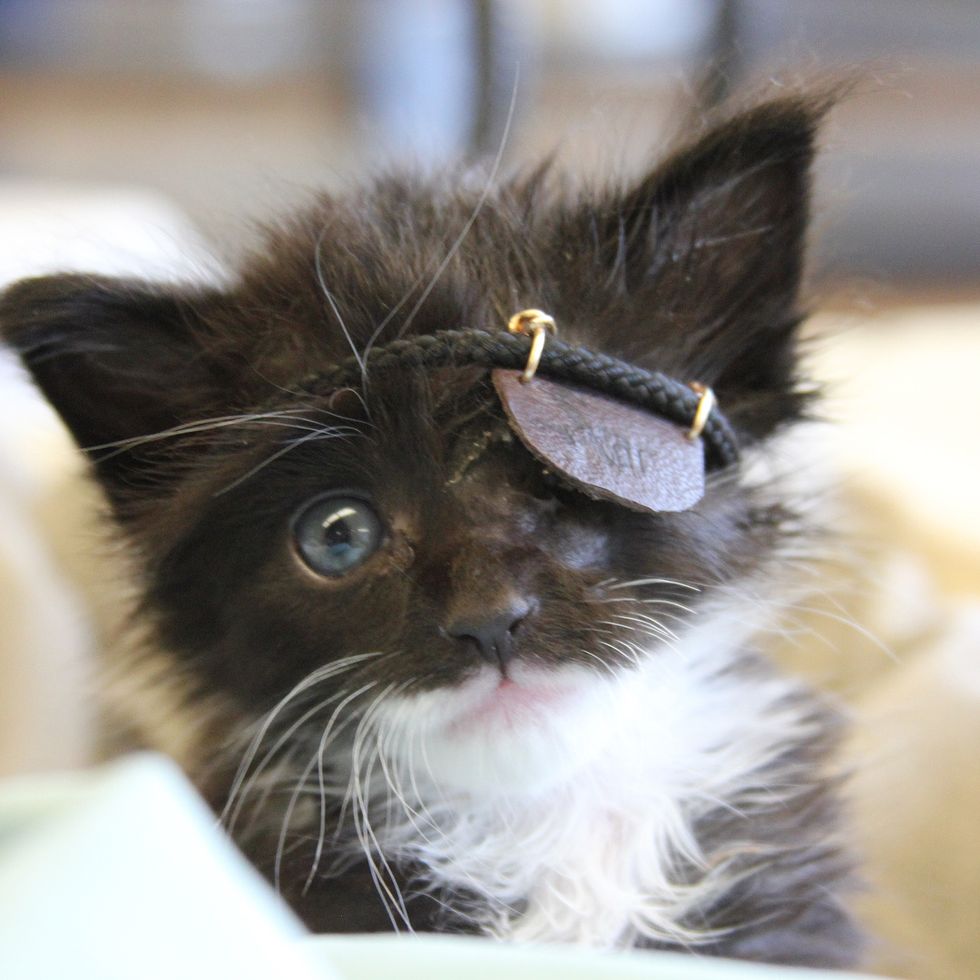 He hand crafted the eye patch and even etched his name on it. After getting the final approval from the tuxedo boy, the kitty was donned with his very own eye patch!

Scar climbed on Jarrett's shoulder for some snuggles. 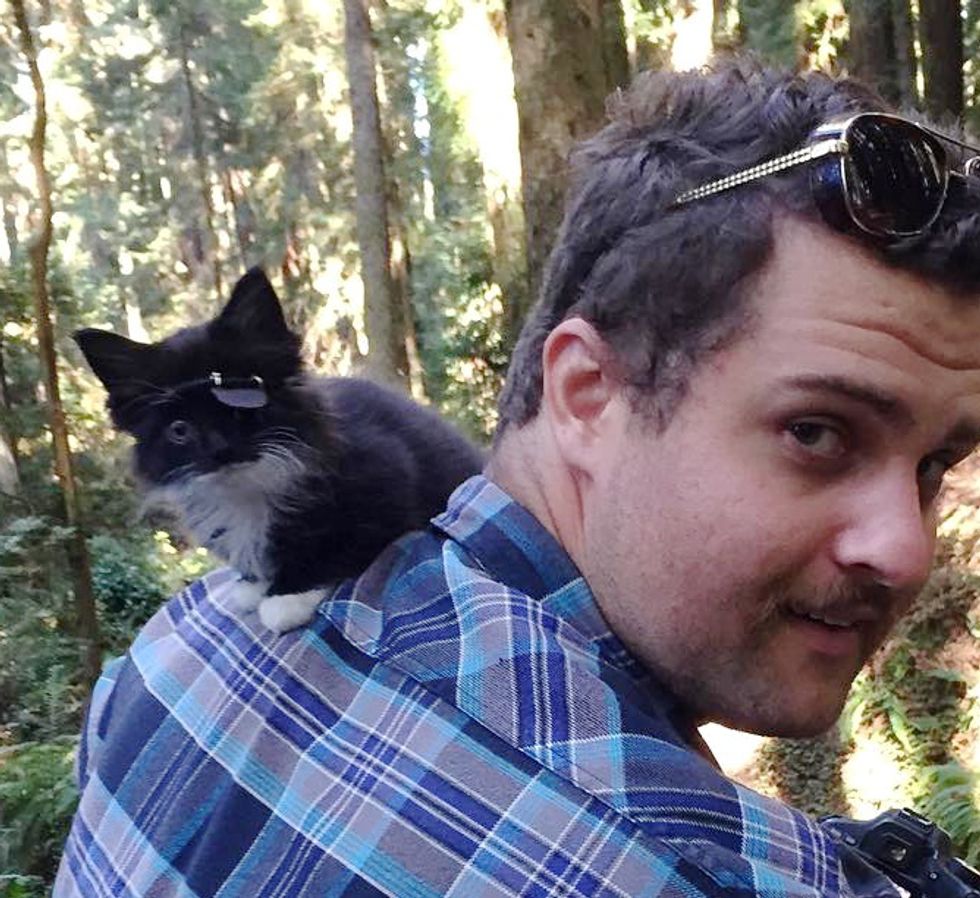 "About a week after surgery he finally started sucking on the bottle and I no longer had to feed him with a syringe," Savannah told Love Meow.

She knew that the little guy was going to be all right. Scar became very playful and affectionate as he got bigger and stronger each day.

He likes to follow his human mom everywhere she goes. When Savannah brings him to the beach, he will run around the area as if it's his kingdom! 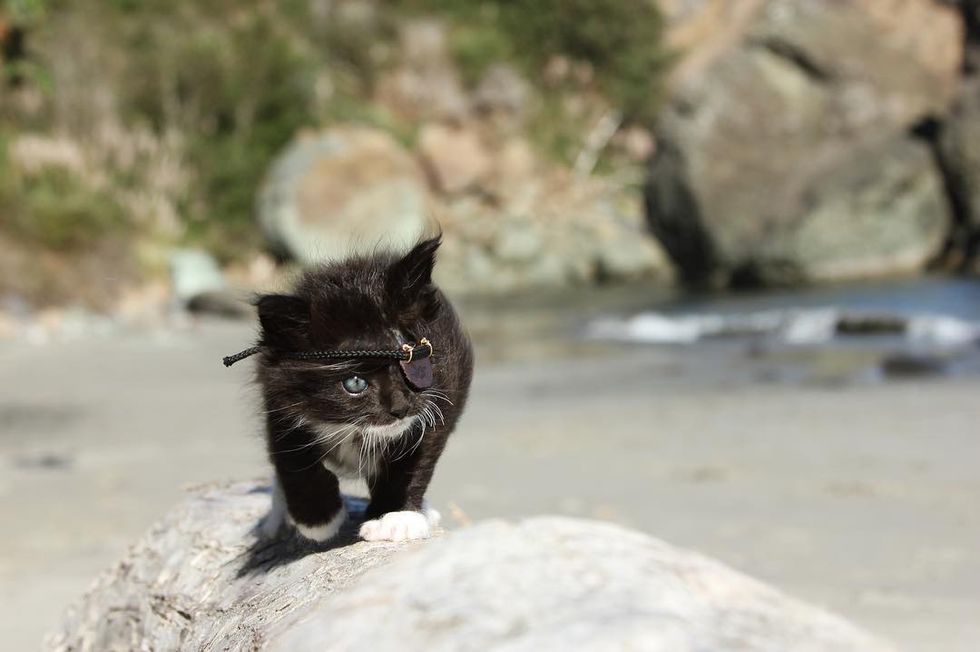 "He is a very loving and playful kitten. He gets along with dogs both large and small as well as other cats. He loves play dates and adventures. He also likes all humans and doesn't tear up the house. He's very good at traveling and molding to new environments," Savannah told Love Meow.

Scar channeling his inner cheetah on this morning's run on the beach. 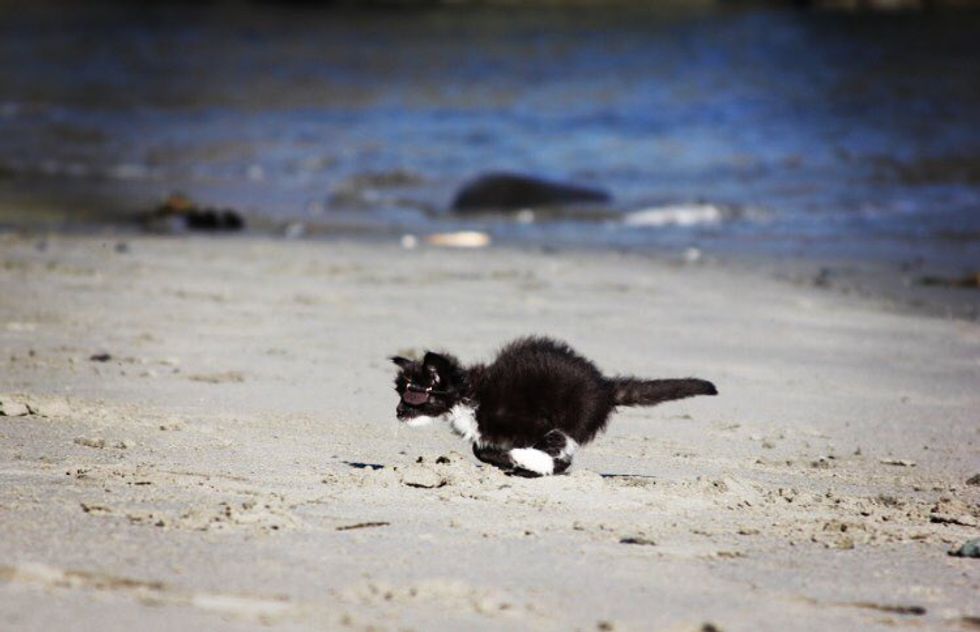 The little miracle kitten is now 6 weeks old. He has beat the odds and is living life to the fullest. With help from his tiny accessary, he's healing very well.

"Scar has one eye, an amazing adventurous life, and a killer handmade eyepatch!" 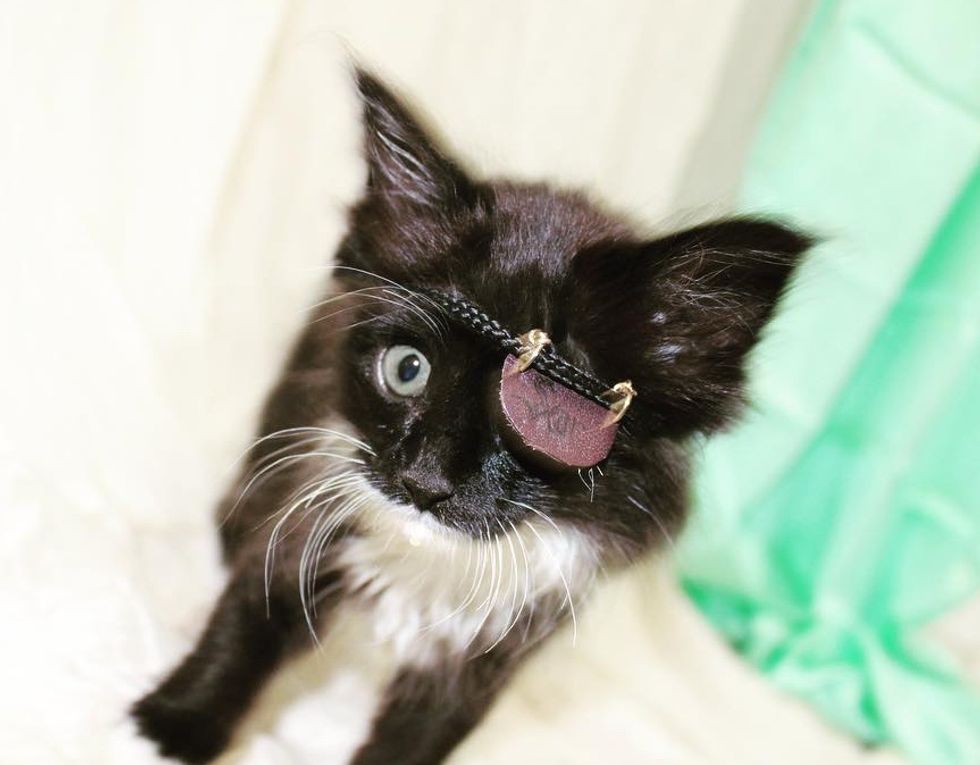 Scar loves long walks on the beach with his human mom :).

Related story: How These Sock Sweaters Protect a Tiny Kitten and Help Her Heal