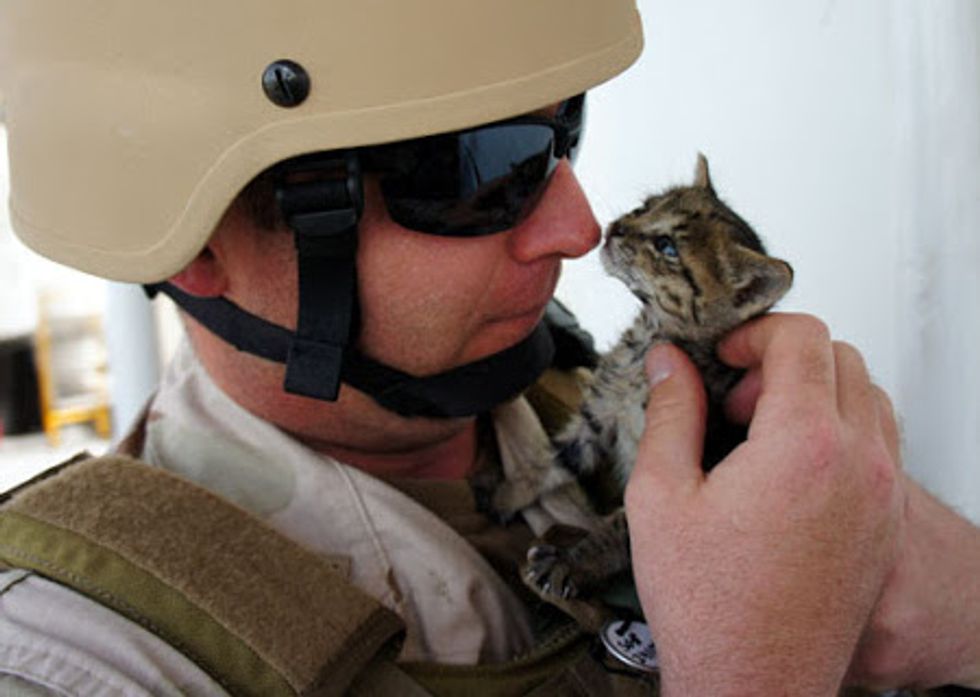 It all began when Eric Hanst and his fellow sailors were Navy deployed overseas. When they were in port for a few days, they were greeted by an unexpected guest. "A cat came aboard via mooring line. We lost track of her, and found her later that evening. We managed to get her back to the pier, and waved goodbye as we took off. This cat seemed unusually upset by this," said Hanst.

What they did not know was that the cat didn't just come alone. "It turns out, when she managed to sneak on board, she also managed to smuggle on three kittens. We thought she had given birth on the ship, but it was pointed out to us that they were too big to be only a few days old."

When they were sailing off, no one on board was aware of the kittens. The little ones were very confused, looking for their mom for almost four days until they were discovered in the machine shop. "We found one initially and the other two a couple hours afterwards," Hanst added.

Even though the crew had little experience bottle feeding a kitten, they all jumped into action, doing everything they could to help these little creatures. They did not have a bottle, so they improvised. They found boxes and necessary things to make a temporary nest for the kittens. They were all so proud, holding their new furry buddies and letting them climb all over them. When it comes to bottle feeding the kittens, these sailors showed remarkable love and care to the tiny little creatures that were about the size of their palm. They were gentle to the kittens and tended to their every whim.

"After the initial shock of being found, and feeding, the kittens were just as happy and playful as any other cute little bugger you'd find anywhere else. They were a great boost to crew morale, and I LOVED THEM," said Hanst.

After they docked, the kittens were transported to local veterinary services. "We managed to find homes for all three kittens. I talked a friend into adopting one of the kittens, the other two were taken in by my a 'cat couple' who are regular rescuers."

The soldiers rescued the kittens and the kittens gave them the companionship and love they needed during these long voyages. They both needed one another and it was a blessing that they found each other.