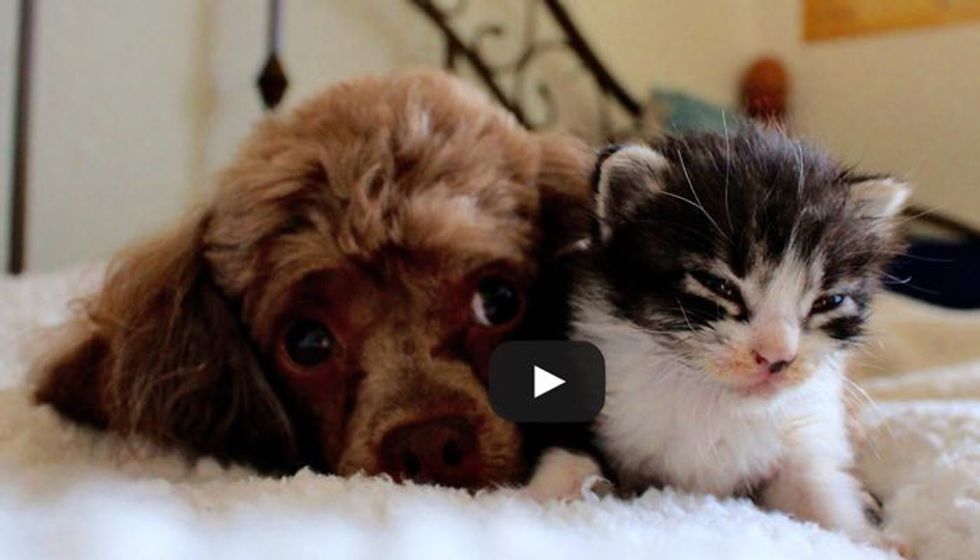 Orphaned Kitten Adopted by Poodle Who was Raised by Cats

This poodle was raised by cats... Now she is raising an orphan kitten herself.

A tiny rescue kitten was saved from the dumpster and in need of some motherly love. A few minutes later, he was in a box full of blankets getting a tongue bath from a poodle who was adopted by cats.

"This kitten, Bo, was found in a dumpster. Our poodle, Amber, (who was raised by cats) quickly jumped in preform the task of motherhood," said Taylor James Johnson told Love Meow. "She instantly began licking and cuddling with Bo."

They took the 3-week-old kitten to the vet, where the little one was given a clean bill of health. Amber also made sure her little feline baby got all the love and TLC she could offer.

"The kitty is much better (cleaner) and stronger, walking around and everything," Johnson added. "Amber the poodle still takes very good care of her new baby."

Bo's got a new mom who understands him. They share the same story as rescues, and now Amber is showing him the same love she received when she was a puppy.

Watch Bo and his new mom Amber in this cute video: