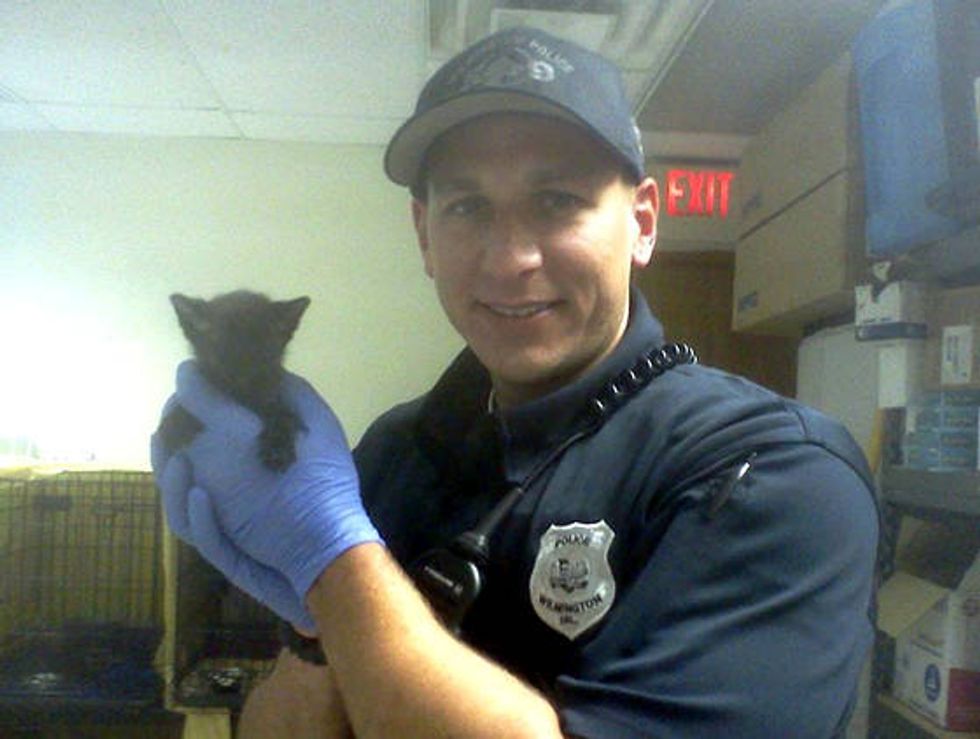 A teeny black kitten owes his life to a police officer Daniel Humphrey after being rescued from an abandoned home in Wilmington, Delaware.

Several kittens they found didn't make it, and then Officer Humphrey heard a faint kitten cry and started searching. "We were just looking, looking, looking and couldn't find it," he said. They looked through the scattered clothes, under the furniture and even went through the garbage.

Then they heard another sound. "If he didn't chirp, we wouldn't have found him. Finally, we found this little guy sitting behind a door next to a shoe… hidden away." (delawareonline)

The tiny kitten was just skin and bones and covered with fleas. Humphrey placed the kitten in a laundry basket with some clothes and rushed him to the Faithful Friends Animal Society.

The rescue kitten was estimated to be about 3-4 weeks old and was in extremely critical condition. If not for officer Humphrey, the little one wouldn't have survived. "We started getting the fleas off him right away… His lips and tongue were white, but we took him to Longwood [Veterinary Center in Kennett Square, Pa.] and they saved his life with a blood transfusion," said Jane Pierantozzi of Faithful Friends Animal Society.

"Thanks to Officer Humphrey. He's a hero… We're very proud of him and the Wilmington Police Department for this." They named the little kitten "Little Humphrey" after his rescuer.

Humphrey said he just did what any officer would. "I'm not the hero here. Faithful Friends is the hero." All he wants now is "for Little Humphrey to get adopted and have a good home.”

Tiny kitten owes his life to a police officer who searched through an abandoned home to save him.

If not for Officer Humphrey, the tiny kitten wouldn't have survived. They named the tiny one "Little Humphrey" after his rescuer and called the police officer a hero.

Little Humphrey is in good hands now and getting stronger and healthier at his foster home. "I'm not the hero here. Faithful Friends is the hero," said Humphrey.