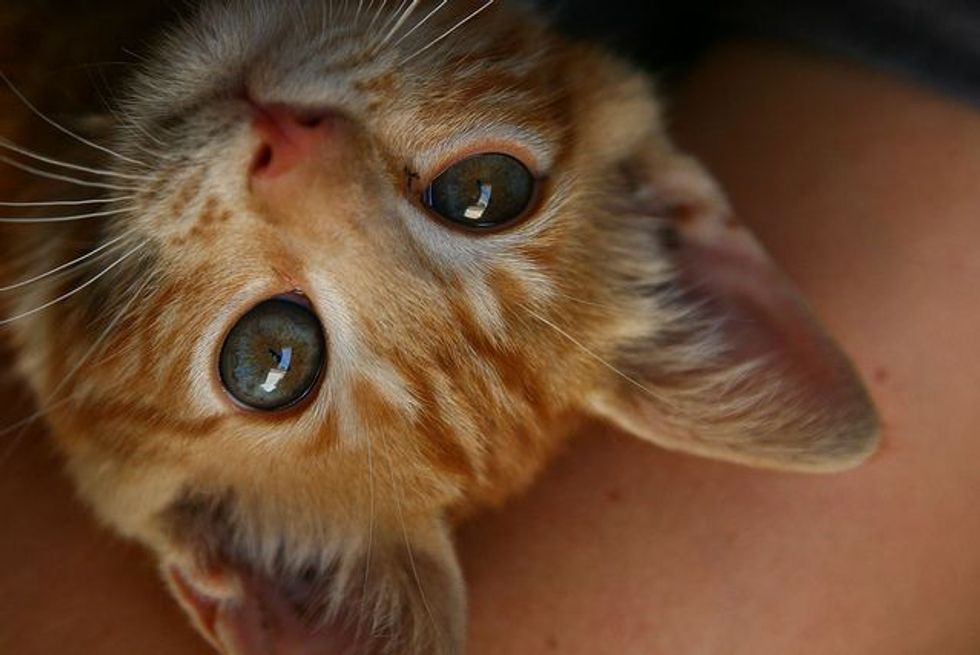 Written by ©Adam Long from University of Toronto. He was working on the Tell Madaba Archaeological Project in Madaba, Jordan.

This summer I was working on an archaeological dig in Madaba, Jordan and we ended up finding Lawrence the cat in a somewhat unexpected way.....

Our site was in the middle of the town on top of a hill (called Tell Madaba), overlooking one of the main streets. There are lots of feral cats wandering around the city, and one day while we were working we looked down and saw this tiny kitten wandering around on the sidewalk at the bottom of the Tell. A taxi then proceeded to park on the street and we saw the kitten move underneath the car, so we all yelled down to let the cabbie know not to move since he had the kitten underneath. A man then got into the taxi but must have been told by the driver that he couldn't go yet since there was a cat underneath the car, so the passenger got out and reached underneath to retrieve the kitten. We were all really relieved that he wouldn't be run over, but were horrified when the man just dropped the kitten and more shockingly, removed him in an unkind way!

Needless to say we were all shocked and disgusted by what we had just witnessed, and were wanting to run down and see if the kitten was ok. One of the workers on the site ended up going down to get the man, and for a couple of days the kitten who eventually was named Lawrence lived in one of the Ottoman era walls on the site. We also managed to find a vet who checked him out and made sure there wasn't any damage from the fall!

After a few days, Lawrence was brought back to our house and ended up living on the top level while we figured out what to do with him once we'd all packed off home to Canada. Due to his rambunctious, somewhat aggressive personality... and incredibly cute looks, several of us were interested in taking him home. After checking into the legalities and costs of bringing him into Canada one of the site supervisors decided that he'd like to have him.

So, when it came time for us to head back to Toronto, Lawrence was flown all the way from Amman, Jordan to Paris, France on a red-eye flight with a bunch of tired archaeology students where he spent 8 hours at Charles de Gaulle Airport before spending another 8 hours flying across the Atlantic to his new home in Toronto where he's now living happily ever after!