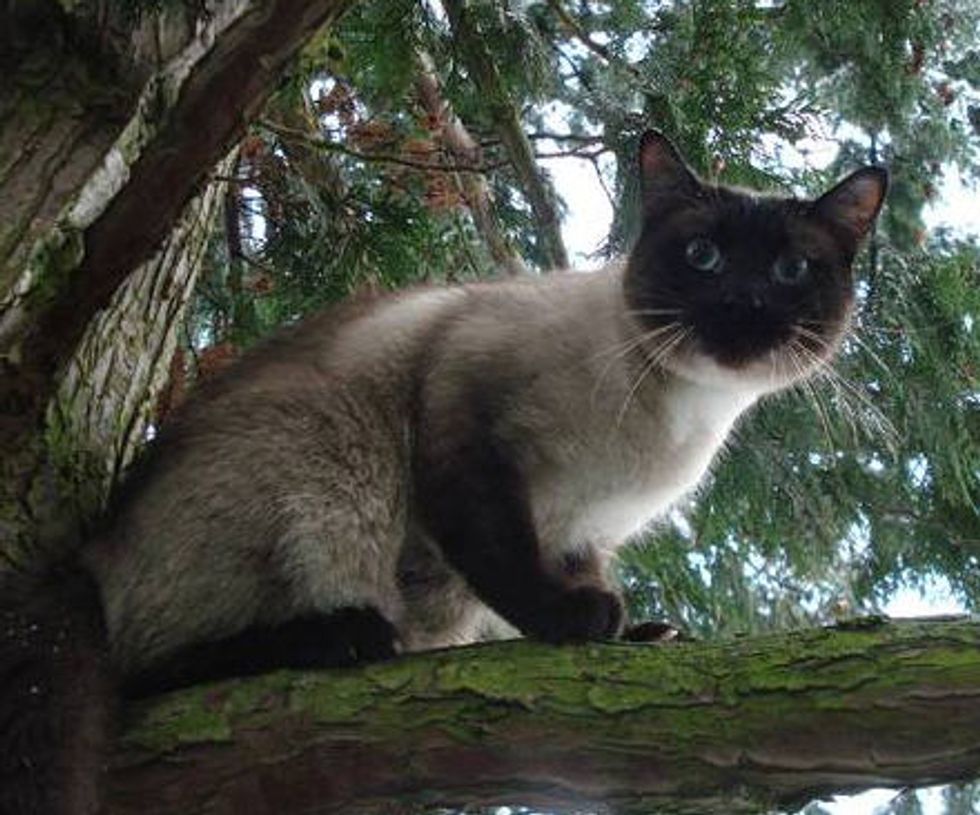 Rescuer for Cats Stuck in Trees

Have you seen a rescuer, trying to free a frightened cat off a tree? That's what Dan Kraus does, a professional specialized in rescuing cats stuck in trees. He has reunited more than 600 cats and a variety of other animals with their families.

The whole story began when the tree service company Dan worked for got a phone call about a cat who was stuck in a tree for five consecutive nights. He went to rescue the little feline who was so weak that the cat could barely meow. This got Dan wondering - help needed to free cats stuck in a tree is not always readily available. It became an inspiration for Dan to start his Cat in a Tree Emergency Rescue.

Every rescue is "filled with drama, love, danger, and a happy ending." Below are some of the stories Dan experienced during his rescue work:

"Jasmin was Sarah’s cat.  She went up a tree on Friday and could not get down.  They tried everything but all Jasmin would do is cry for help.  Sarah was worried sick, Jasmin was only six months old and would usually sleep with Sarah at night. That night neither of them got much sleep. The next day was Sarah’s birthday, she was five.  Everyone came over for a big birthday party in the back yard.  The party was not going so well because Jasmin's meows were crying out and Sarah could think of nothing but her cat. I don’t know how they finally got my number but after I got Jasmin down I was the hero of the party and got some birthday cake with a glass of milk."

"Alex spent two nights at the very top of a 65 foot Hemlock tree."

"Jazz was in a Cedar for four days, on the forth day it started snowing, I got there just before dark."

"Lucky spent three nights in this tree.  He was also rescued from a shelter, and has been lost for days in the heating vents of a house."

"Oreo was stuck in the very top of this tree for three days. Every time the wind would blow Oreo would make a deep sad meow."

"Casper was stuck in the top of a Douglas fir tree for two cold nights.  The family called everyone, finally getting my number on the third day.  I got there just before dark."

"Coco was up for four cold rainy nights.  She was about 95 feet up in the top of a Weastern red cedar.  She was cold and wet with a little tired weow.  The owners wrapped her in a towel and she started purring."

"Chico spent the night at the top of a Western red cedar."

"Kit Kat was stuck in this Maple tree for two days."

"Smudges was in the top of a 50-foot Western red cedar for two nights.  She was hanging on tight with one leg wrapped over a branch, just hugging the top with all her might.  It was really windy and the wind was blowing her long hair all over the place. She was happy to see someone coming up the tree to get her. Her owners have a lot of cats that they have adopted from animal shelters. When she got back to the house all the cats had to check her out as if to say, 'Where have you been?'"

You may also like this story: Kitten Saved by a World Renowned Climber