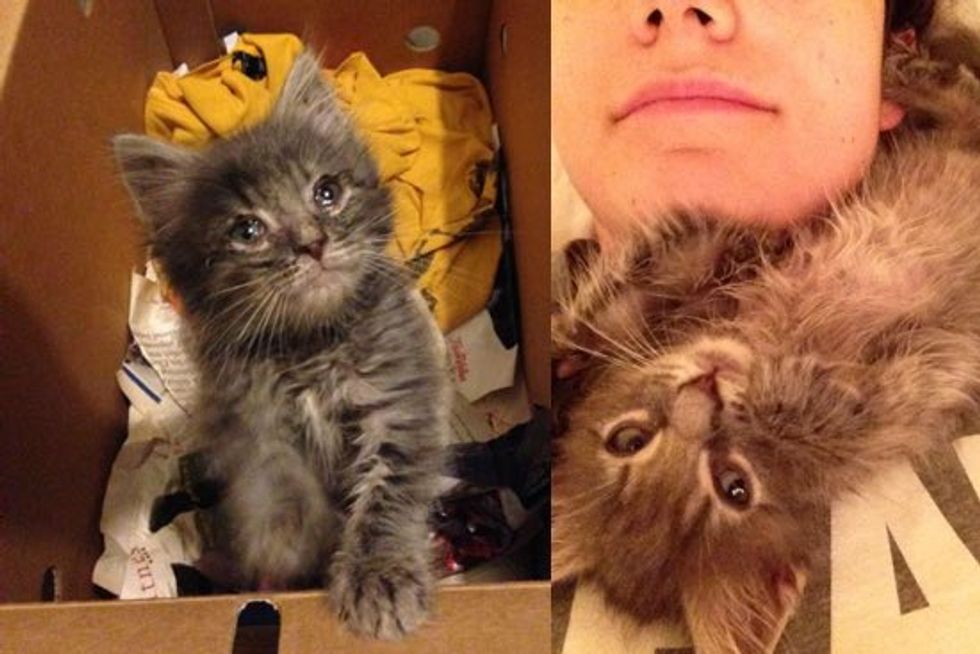 Scruffy Kitten Strays into the Heart of His Rescuer

A scruffy stray kitten was meowing for help in a parking lot. Kaitlin S. saw the little sickly kitten and just couldn't leave him there. She wasn't a cat person, but something about the kitten just touched her heart and things quickly changed...

Kaitlin S. wrote via imgur: "One afternoon, I was pulling into the parking space of an apartment complex when I saw a tiny, fluffy grey thing chasing after this lady and her little boy. They were walking quickly, the woman pulling her son along.

What I had first assumed was a tiny, tiny puppy on a leash, I soon realized was a frail, mangy kitten, meowing after them as it ran to keep up. I asked the lady if it was her cat, and when I spoke, this little creature turned around to face me. It looked like it was missing an eye. Greenish discharge all around its nose and mouth had matted its fur, sealing one of its eyes shut.

The lady told me that it was just a stray (something I had figured out by this point)... So I decided to step in and try to help him.

Initially, I was thinking I should call Animal Control or something, but I decided to give him a bath and something to eat instead.

This was after his first bath. Dawn soap is gentle enough for kittens and it kills fleas. It took like three baths to get the fleas off of this guy, though.

I set up a little water dish and litter box, and found some canned cat food to give him. He ate ravenously then fell asleep for the rest of that afternoon/evening.

I knew I wouldn't be able to keep him, so I'd planned on taking him to the shelter the next day. (That's the responsible thing to do, right?)

Wrong! As it turned out, the shelters in the Raleigh area, where I found him, were all at maximum capacity. This, in combination with his sickly state, would mean that he'd be put down immediately after turning him over to the Humane Society.

I wasn't a cat person really, but the thought of this innocent, helpless little fur ball being put down killed me a little.

So I took him home that night and figured I could find him an adopter myself (who wouldn't want this little bundle of joy??). If I could help him get well, he'd be a perfect kitten to adopt.

The next day I took him to the vet. She gave us some antibiotics to help clear up the upper respiratory infection he had (that is what was causing the crusty eyes). I could feel myself becoming a little attached, already throwing around name ideas (I had to call him something during our time together, right?).

So it was decided. I'd found him that Tuesday and by Friday I was super in love with this little guy. My mom helped me pay for some more vet care and even bought Wolfgang some toys (that's his name because he loves music and I really just wanted to call him Wolfie, due to his wolf-like appearance).

Wolfgang has become a wonderful companion. Even as I write this, he is curled up on my stomach, listening to music with me.

If there was one 'moral' to this story, it'd probably be spay and neuter your pets because it's not fair to bring baby animals into this world that will be hungry and homeless.

I tried to get this little guy a good home, but it proved more challenging than anticipated. I eventually became really attached and felt like I could be a pretty good cat parent, so meet my son, Baby Wolfgang!"

Photos by Kaitlin Saunders via imgur.