Shy Kitten With Cleft Lip Was Overlooked at Shelter Until a Woman Took a Chance on Him.

Victoria went to a local shelter to help a friend look for a cat but ended up falling in love with a very shy kitty who had been overlooked by a lot of people. 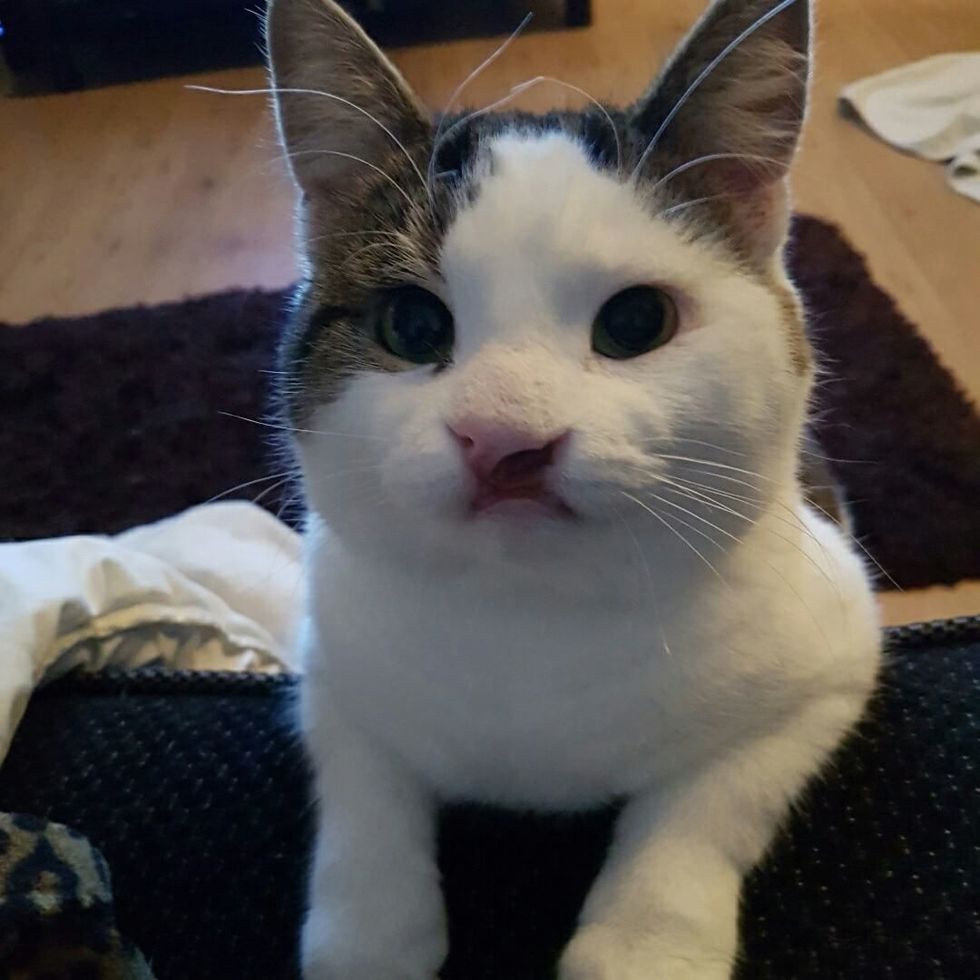 Victoria was at the Cats Protection Adoption Center (in St Helens, Merseyside, UK) with a friend 1.5 years ago. She hadn't planned to adopt a cat but one of the kitties caught her attention - it was a beautiful 8-month-old cat with a cleft lip.

As she approached him, the shy little boy was so nervous that he quickly retreated to his bed, his security spot. After talking to the shelter staff, they learned that the kitty had been abandoned. He was very timid after all that he had gone through.

Since then, he had stayed at the shelter for three months and yet no one had stopped for him because of his shyness and concerns about his deformity.

"His cleft lip is only cosmetic and doesn't affect him," Victoria told Love Meow. 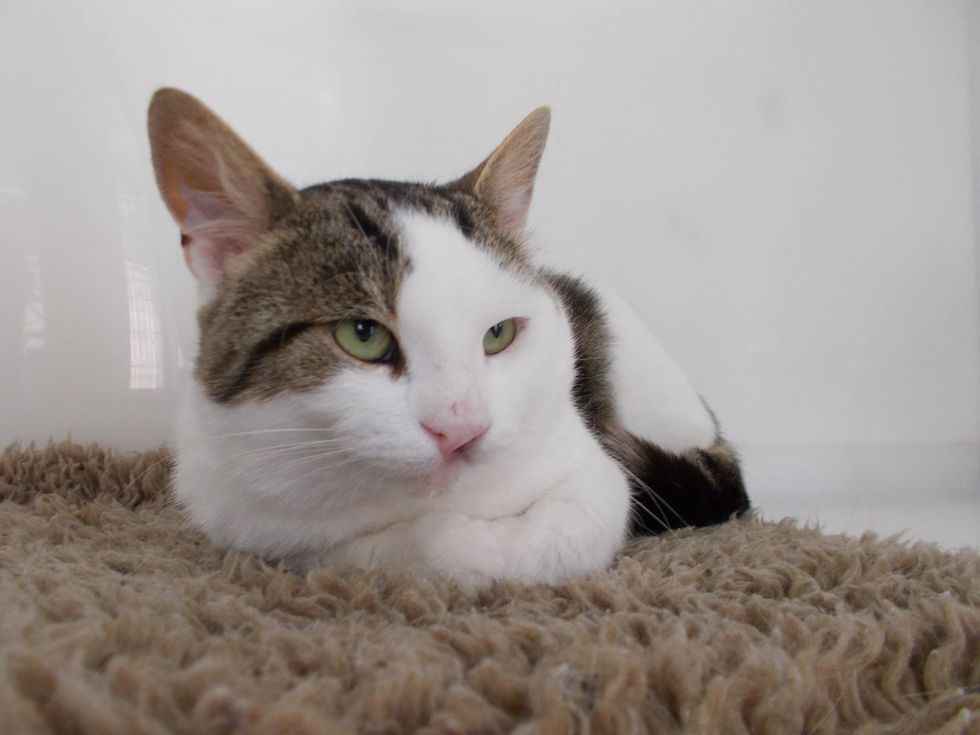 Victoria saw a beautiful little guy hidden under that shy exterior. "I knelt down and talked to him. When I saw his cute little face, I knew I wanted to give him a home," Victoria told Love Meow.

She renamed the kitty Bruce. That day, Bruce left the shelter for good. 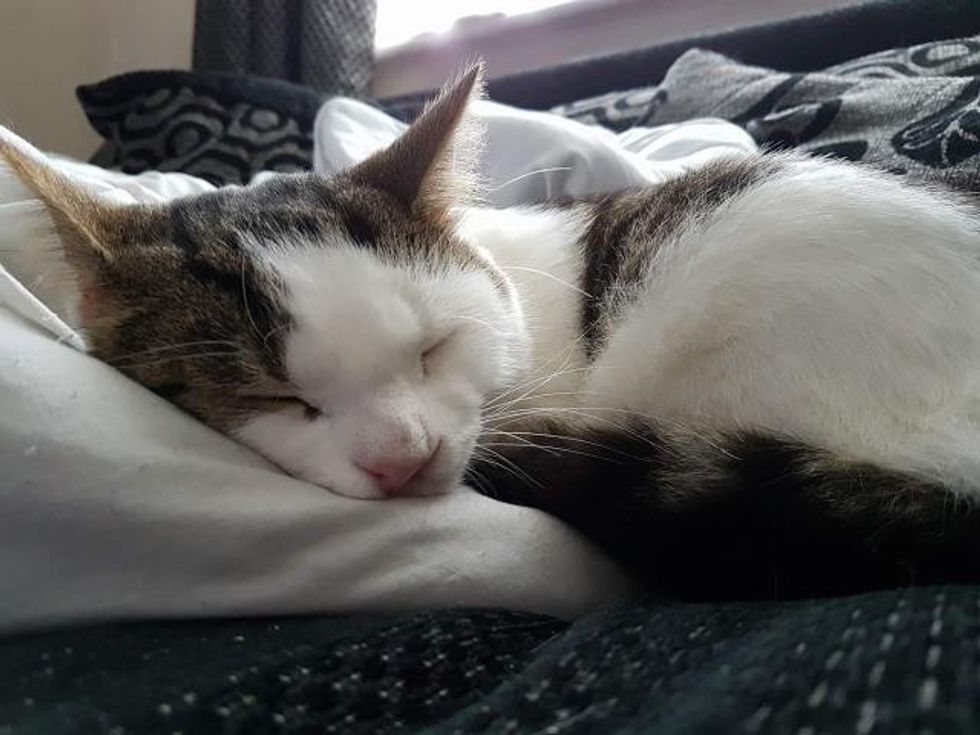 "It took him quite a while to come out of his shell when we brought him home. We showered him with toys, learned that he likes to play fetch, and sat with him and just stroke him to keep him calm," Victoria told Love Meow.

With a lot of patience and plenty of cat treats, Bruce slowly came out from hiding. 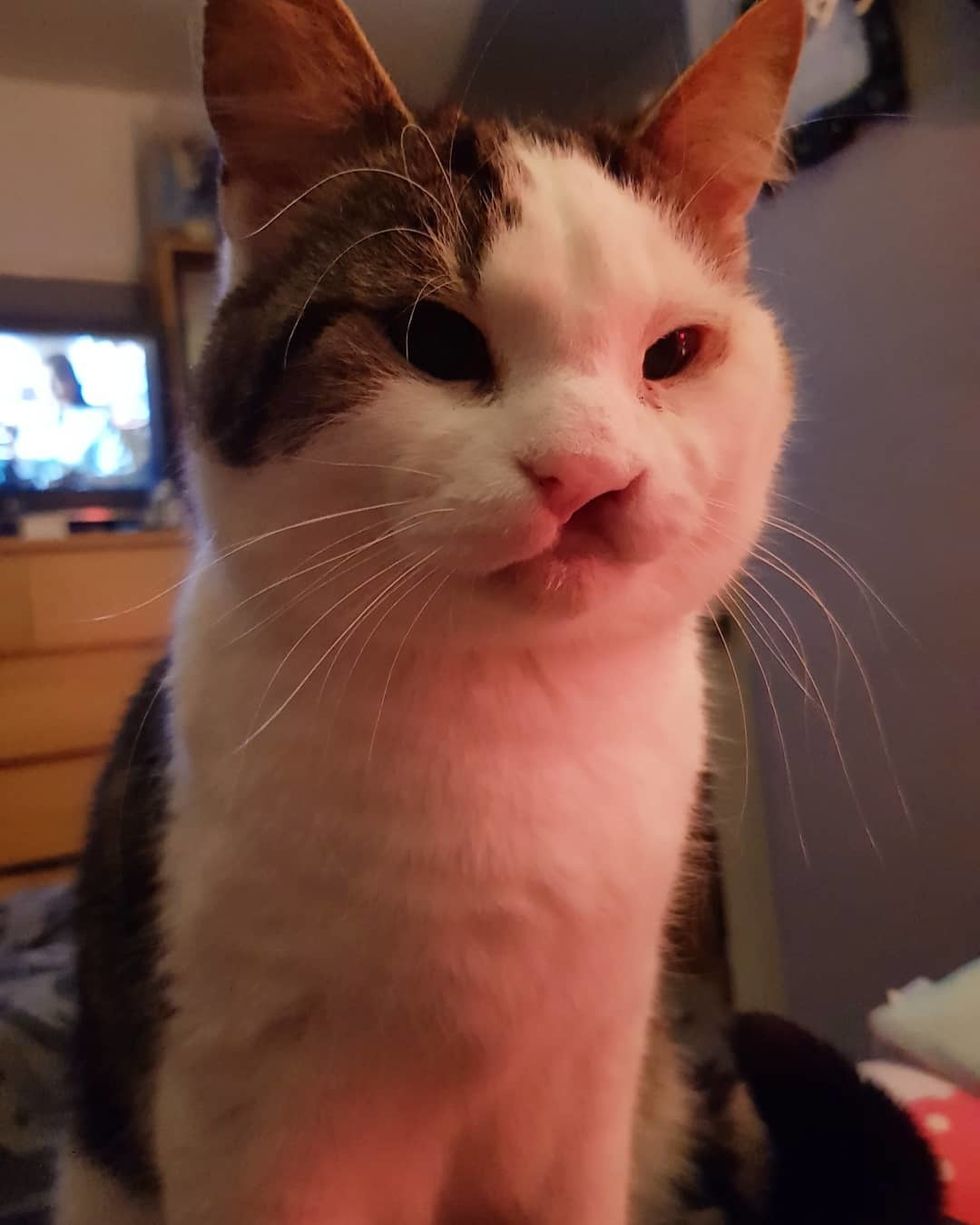 When Bruce decided that he would no longer be afraid, Victoria and her partner were surprised to discover what a cuddlebug he truly is. Underneath that timid facade, there hidden a loving soul who just wanted to snuggle.

"He loves to roll on his back for tummy strokes and loves cuddles with me." 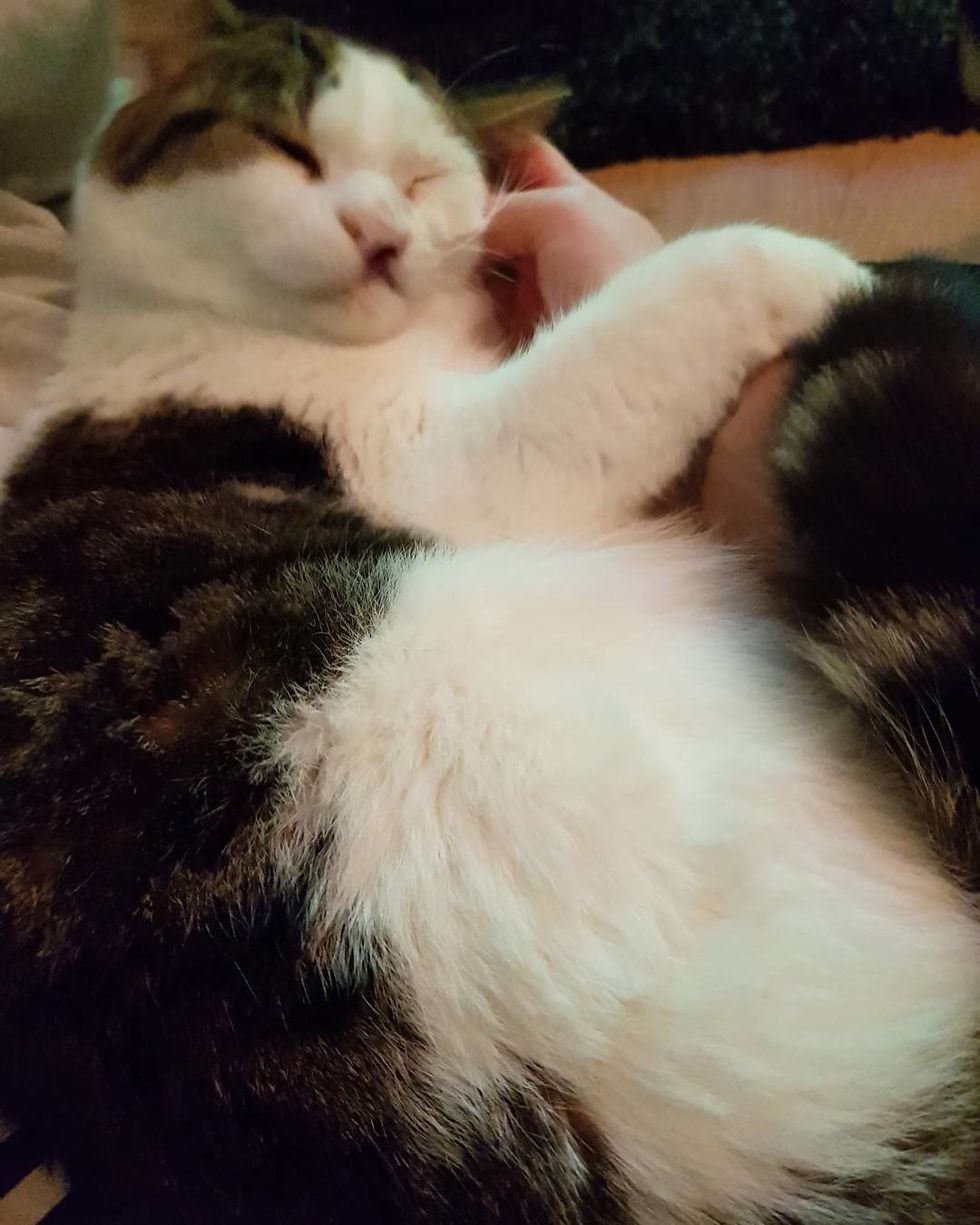 The couple has three other cats at home.

It didn't take long for Bruce to start cuddling with his feline brothers. 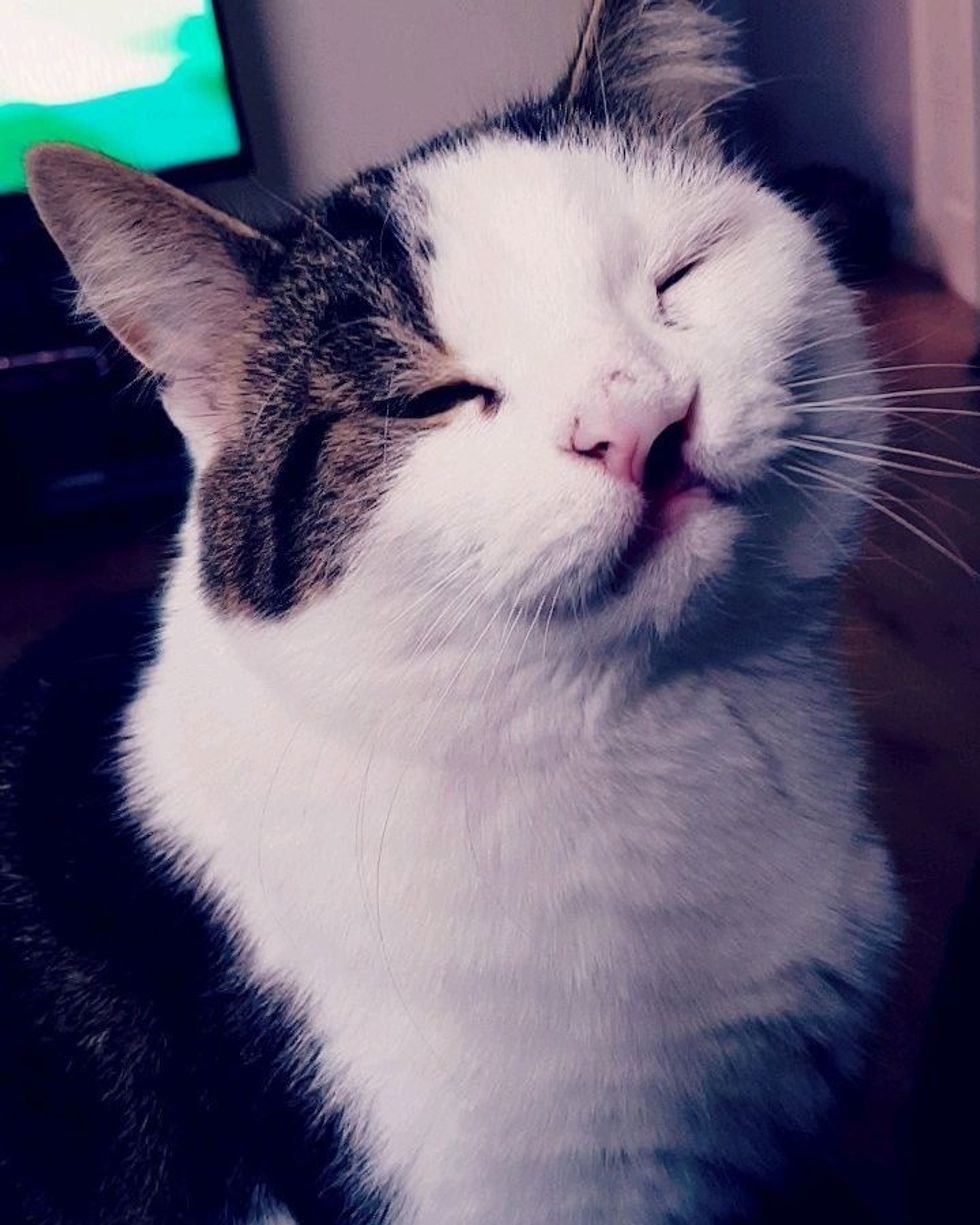 Chad and Alex, who were rescued from the same shelter as Bruce, took their little brother under their wing.

"His older brother Alex likes to snuggle with him!" 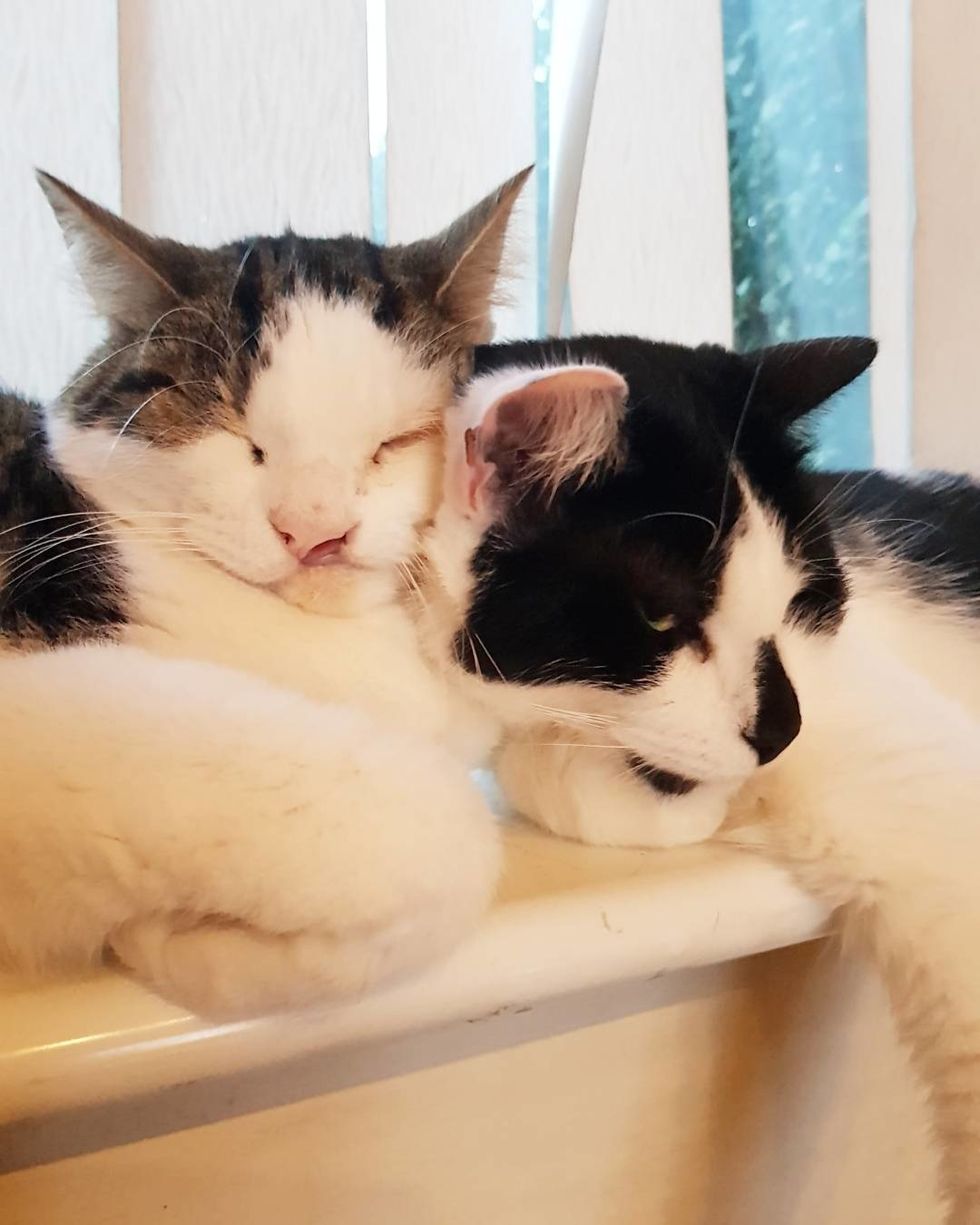 Ron, who came from a different shelter, became Bruce's best play buddy and partner in crime.

They like to chase each other and create mischief around the house. 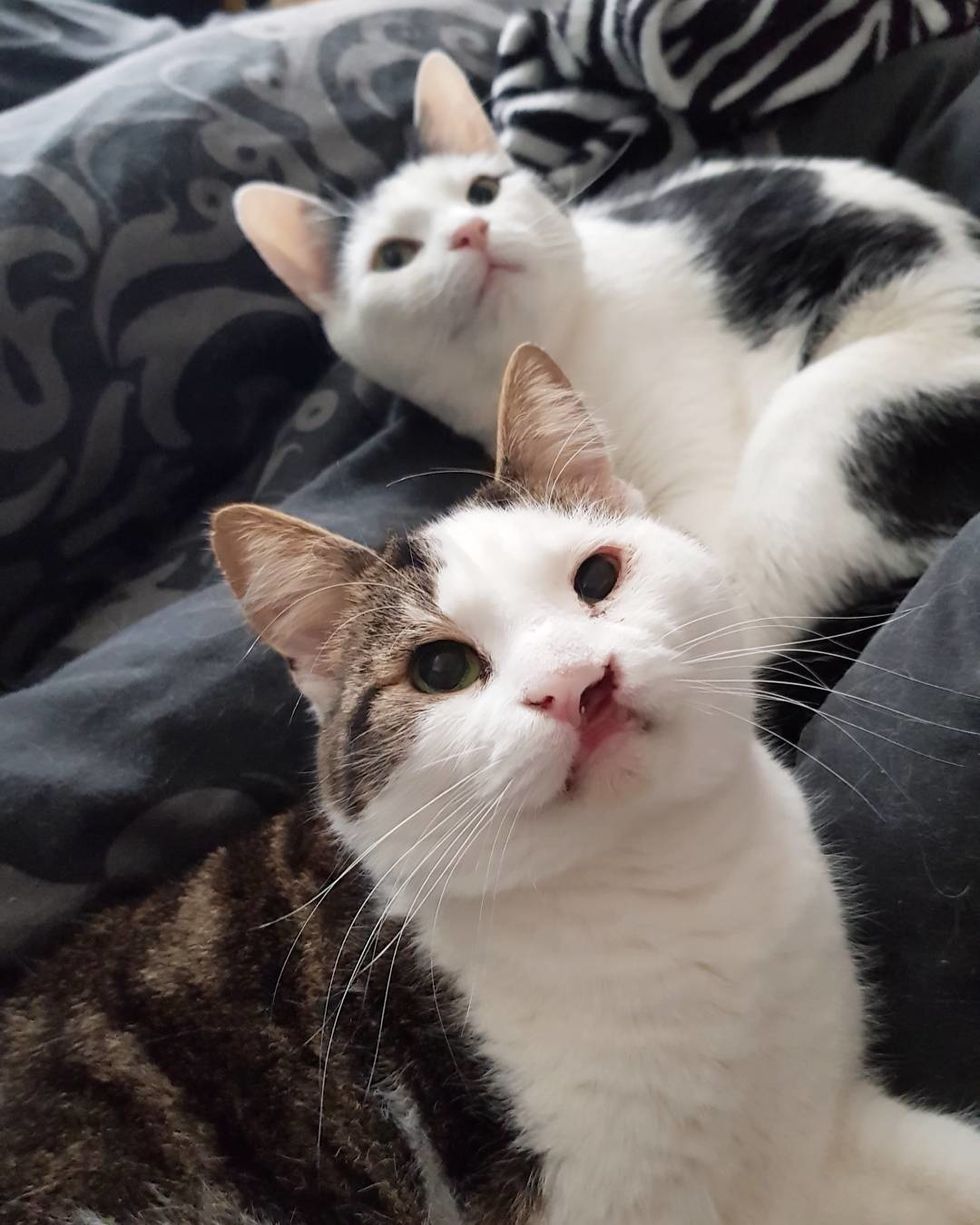 Bruce adores his feline brothers and shares everything with them - treats, toys, and Bird TV. 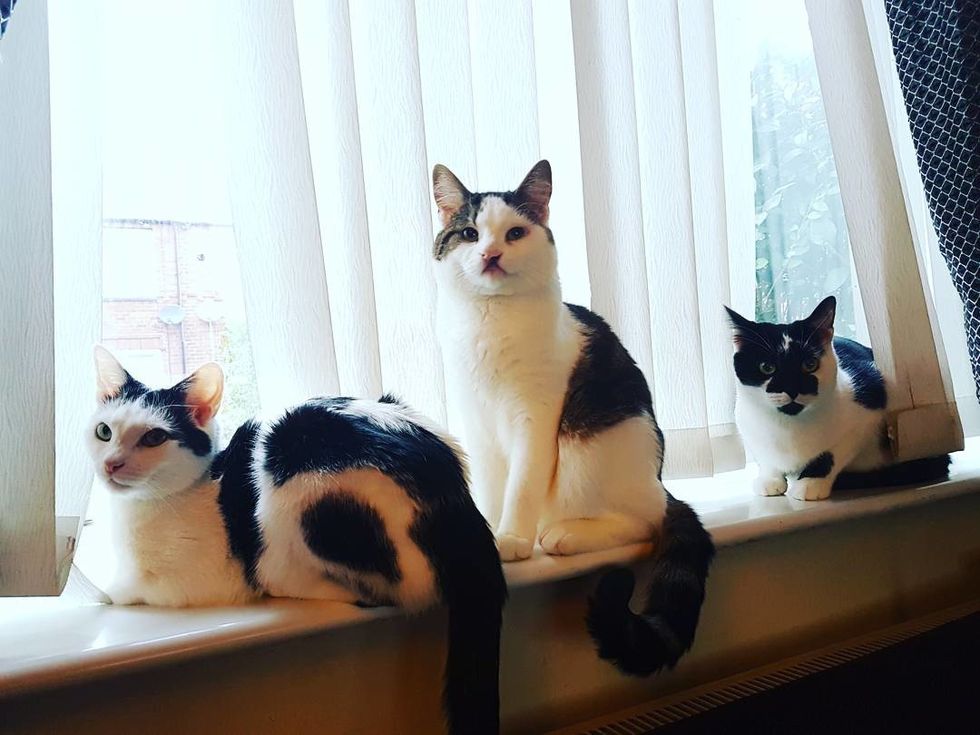 He's a goofy little guy who loves to play and follows his human mom everywhere she goes. "He likes to meow loudly if he's not in the room that I'm in," Victoria told Love Meow. 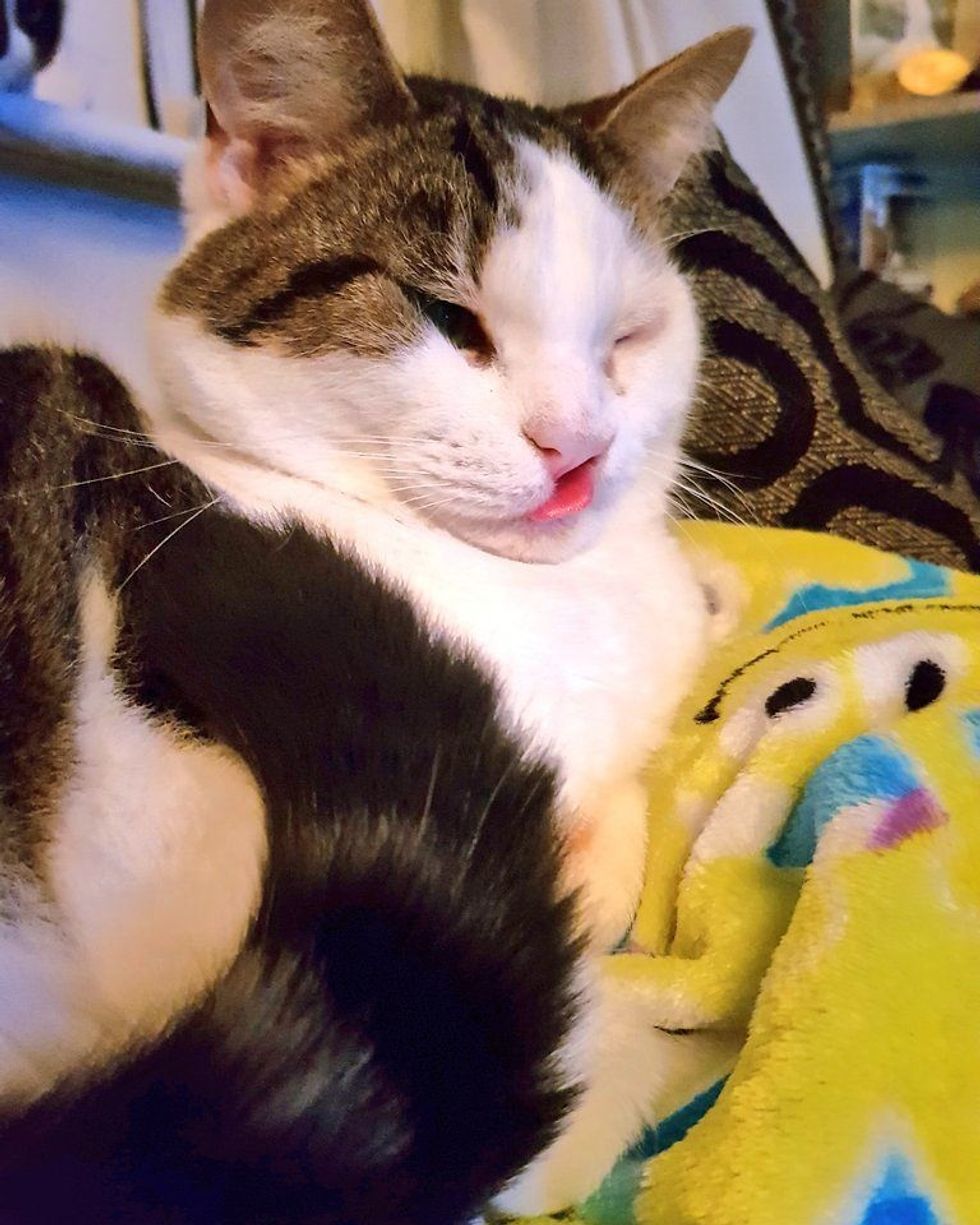 Bruce is no longer scared of things or people. He's as happy as can be. 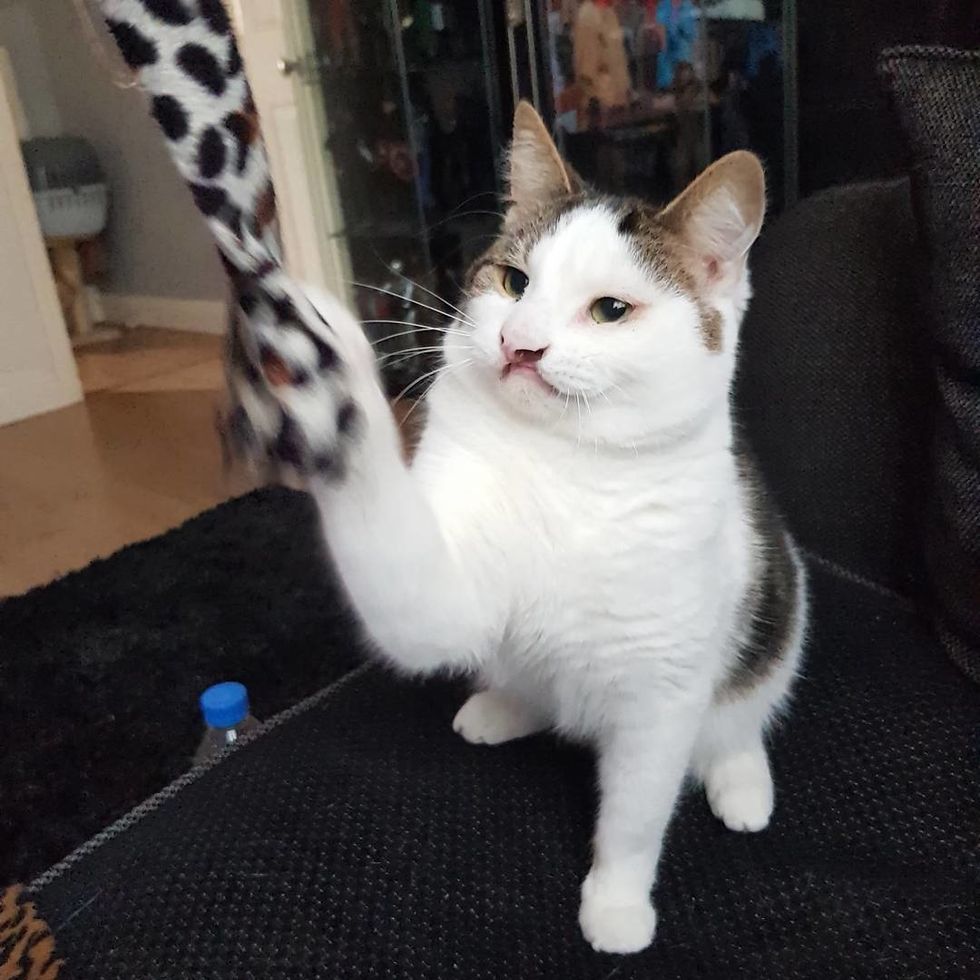 "When we first brought him home, he was incredibly timid and shy," Victoria told Love Meow.

"But with encouragement and his three other kitty brothers, he has blossomed into a happy, loud boy!" 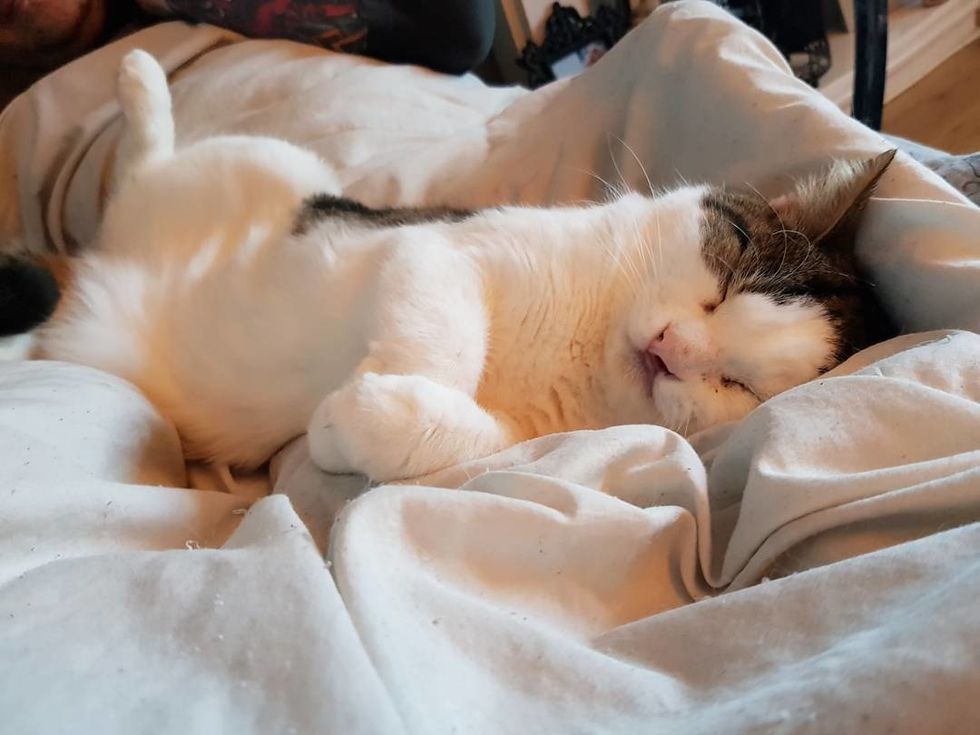 Watch Bruce in this cute video: