Shy Kitty Who Hid From Everyone, Finds Her Sass When She Meets Someone She Loves

A little singleton was taken into a shelter three years ago. She was very shy and would try to hide from people but when she found someone she loves, everything began to change. 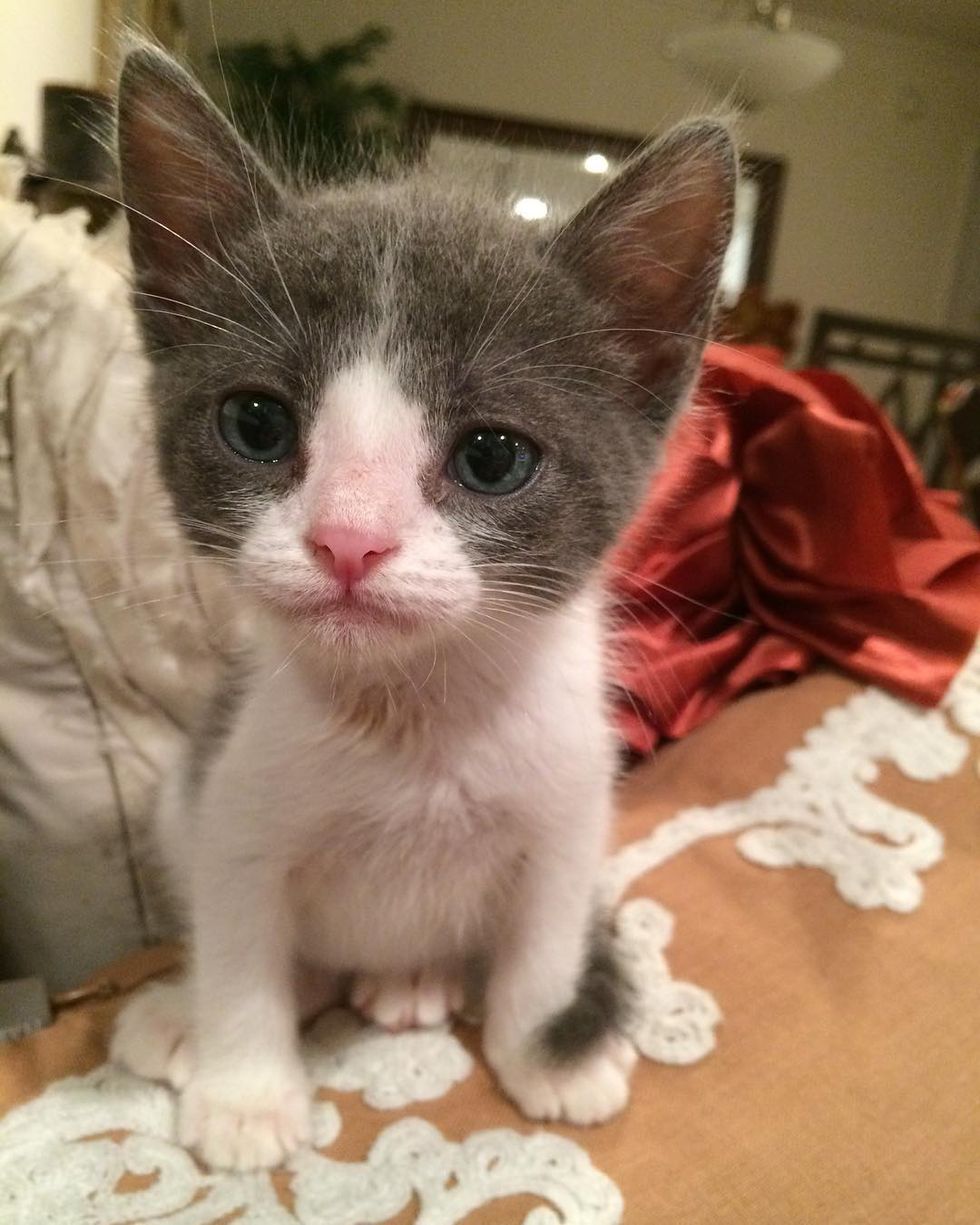 Little Imogen came into the West Los Angeles animal shelter in late 2014 after she was found all alone. She was very timid around people and a bit grumpy towards other cats.

Casey Christopher, a photographer, visited the shelter, looking to adopt a cat. A volunteer, Kelly, showed her two little foster kittens, and one of them was Imogen (then named Penny). The shy kitty, who would normally hide away from strangers, somehow took a liking to Casey, and at that moment she just knew.

"I saw Immy and was with her for fewer than five minutes when I decided to take her. It's a weird sense of knowing it's the right person," Casey told Love Meow. 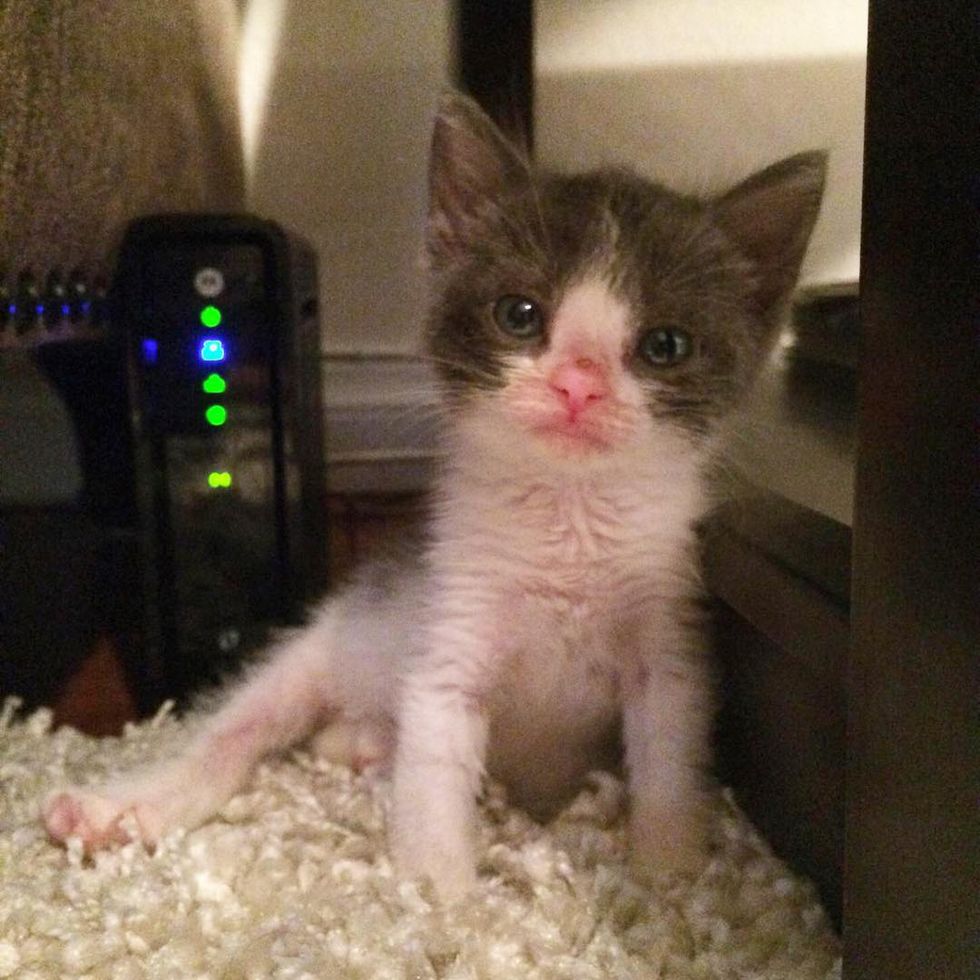 When Imogen is with her human mom, she has so much confidence in her that she feels like the boss in the house.

After she moved into her forever home, her personality began to shine through, and soon Casey discovered her sass and abundant cattitude. 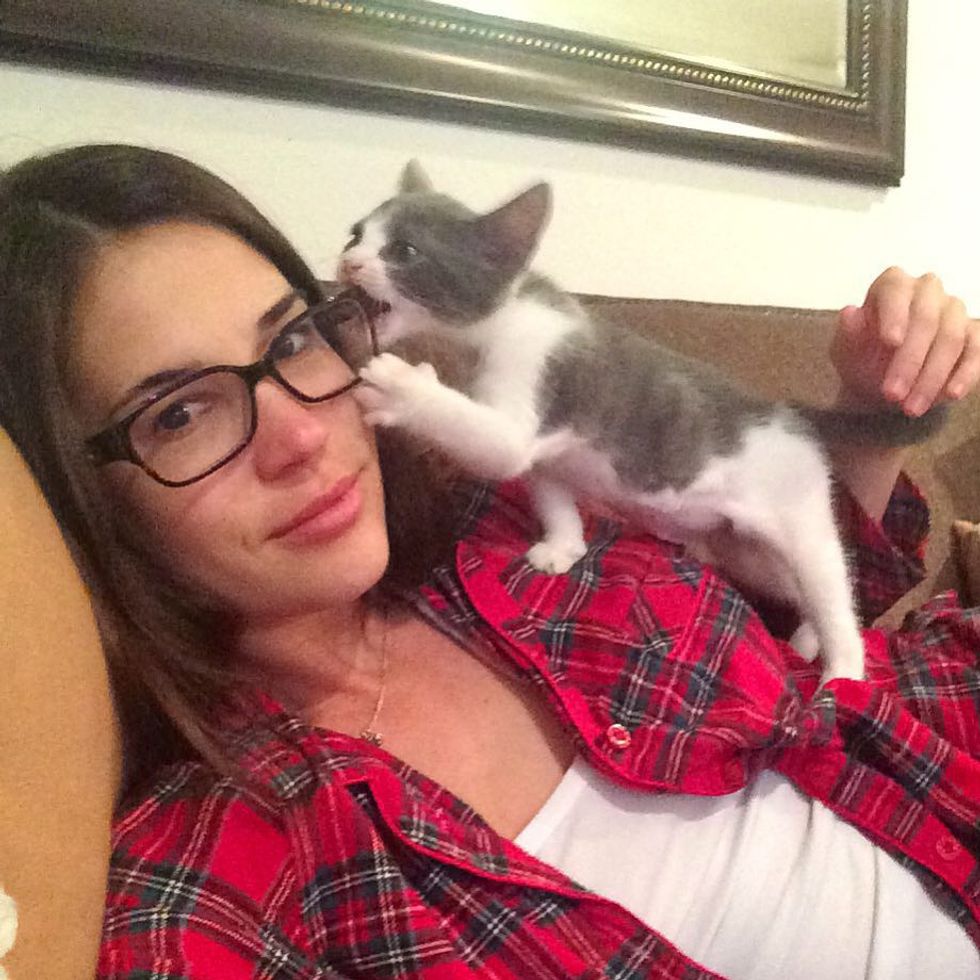 Immy loves to talk especially when she wants something.

"She screams for treats. She lives to eat. Her pupils dilate so much when she eats Churu treats — it is hilarious. She'll walk up to the dogs and swat them out of her way so she can be closer to me," Casey told Love Meow. 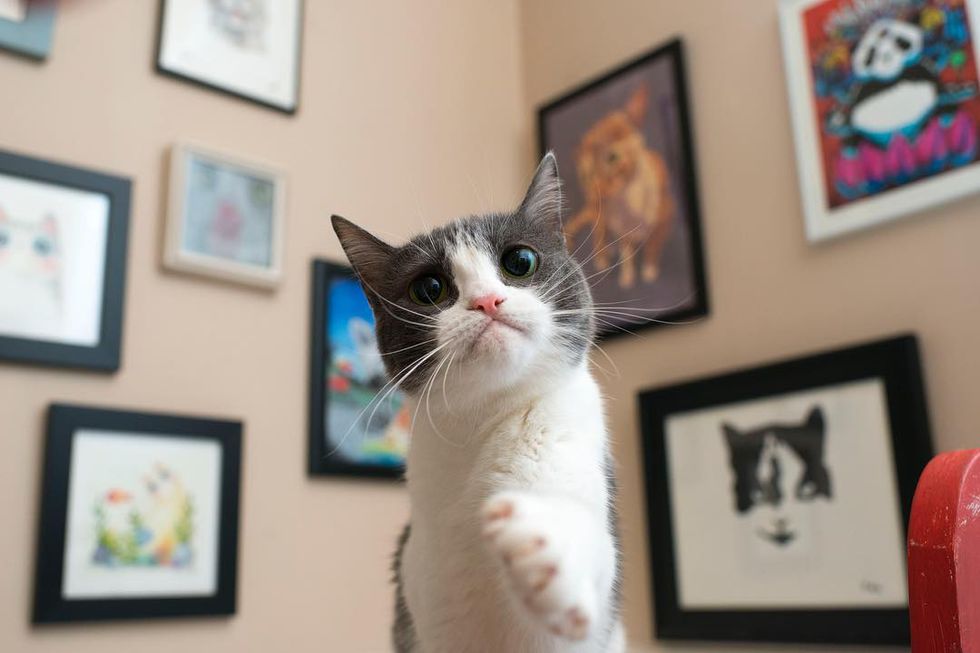 Immy has an adorable grumpy face.

"She is a sass queen and I am obsessed with her. She has an underbite, which makes her extra cute, especially in profile, and a permanently grumpy face that always makes me laugh." 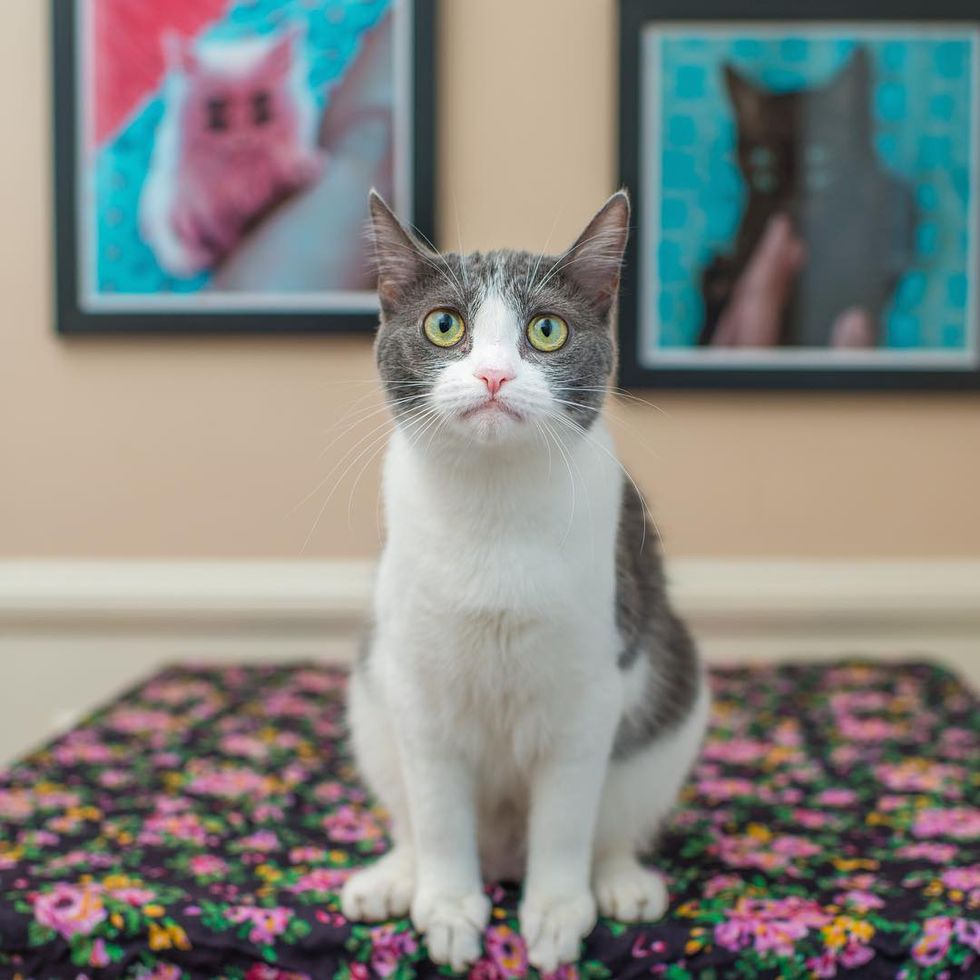 "She comes running when I call her name and the pitter-patter of her little feet makes my heart explode," Casey told Love Meow.

"She is unbelievably clumsy. She gets so excited for food and jumps onto tables or counters to get a snack and falls or slides right off." 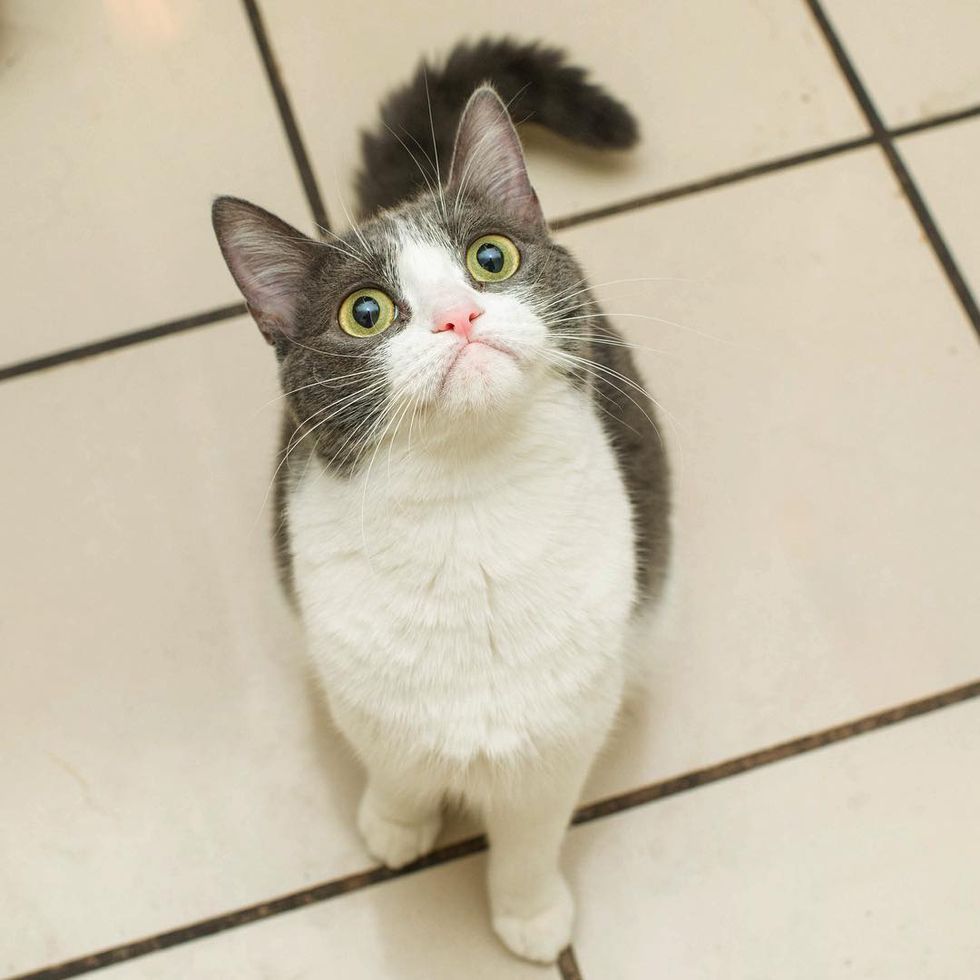 "She loves having her photo taken because she knows it means more treats. When I set up my backdrops and lighting, my two dogs and Immy all come running and fight for their turn to model.

"They surround me like little sharks and photobomb each other because they want more food." 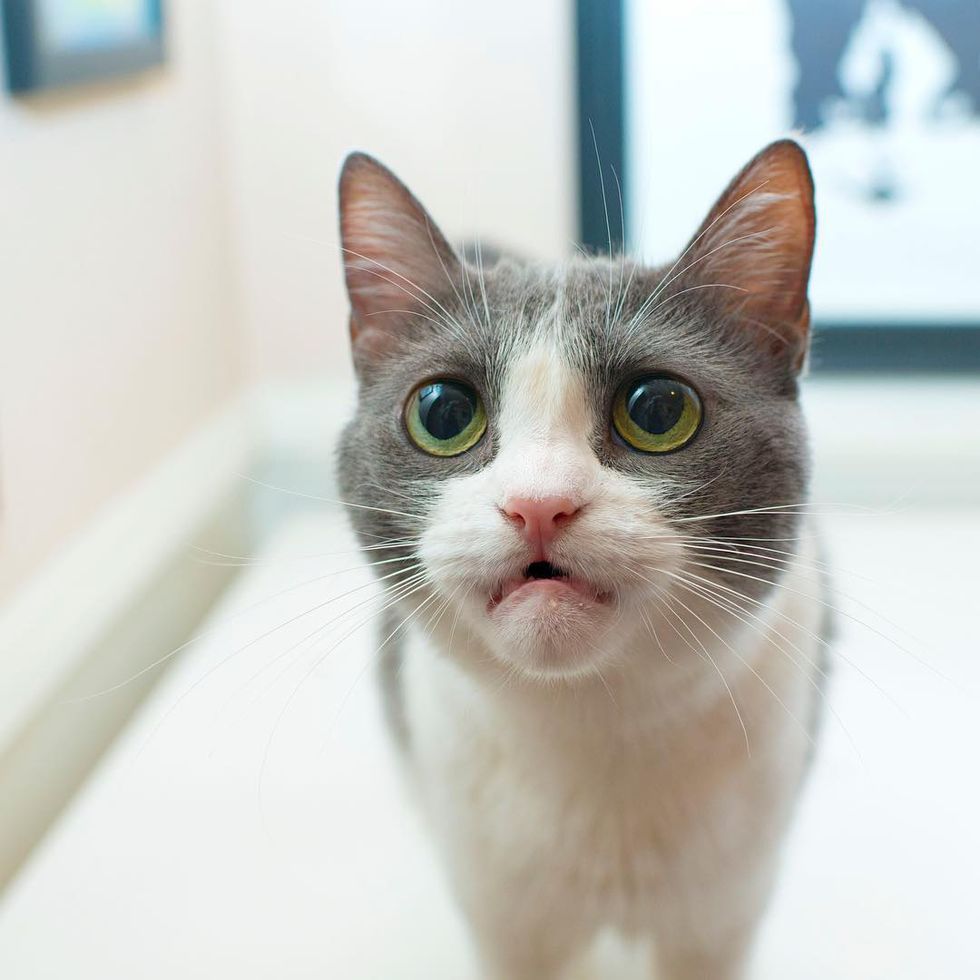 Immy is three years old now! She's grown to be a stunner!

"She mostly sits and looks out the window all day, and her little face makes her look like a grumpy old man watching over the neighborhood." 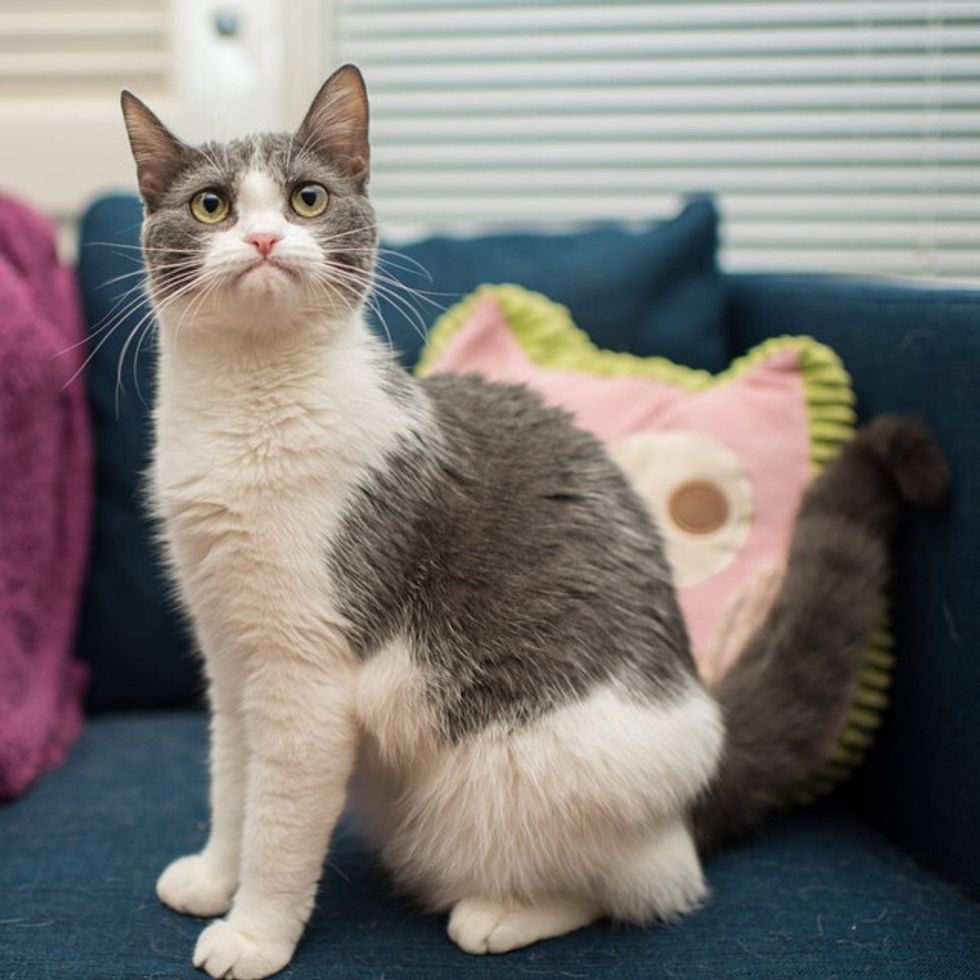 "She has a very calming effect on me. I've had dozens of pets throughout my life — cats, dogs, rabbits, goats, hamsters, chickens, etc — but there is something very special about Immy," Casey told Love Meow.

"We have a really deep connection and she can calm my anxiety like nothing and no one else can. I'm forever grateful that she is mine. She really changed my life completely." 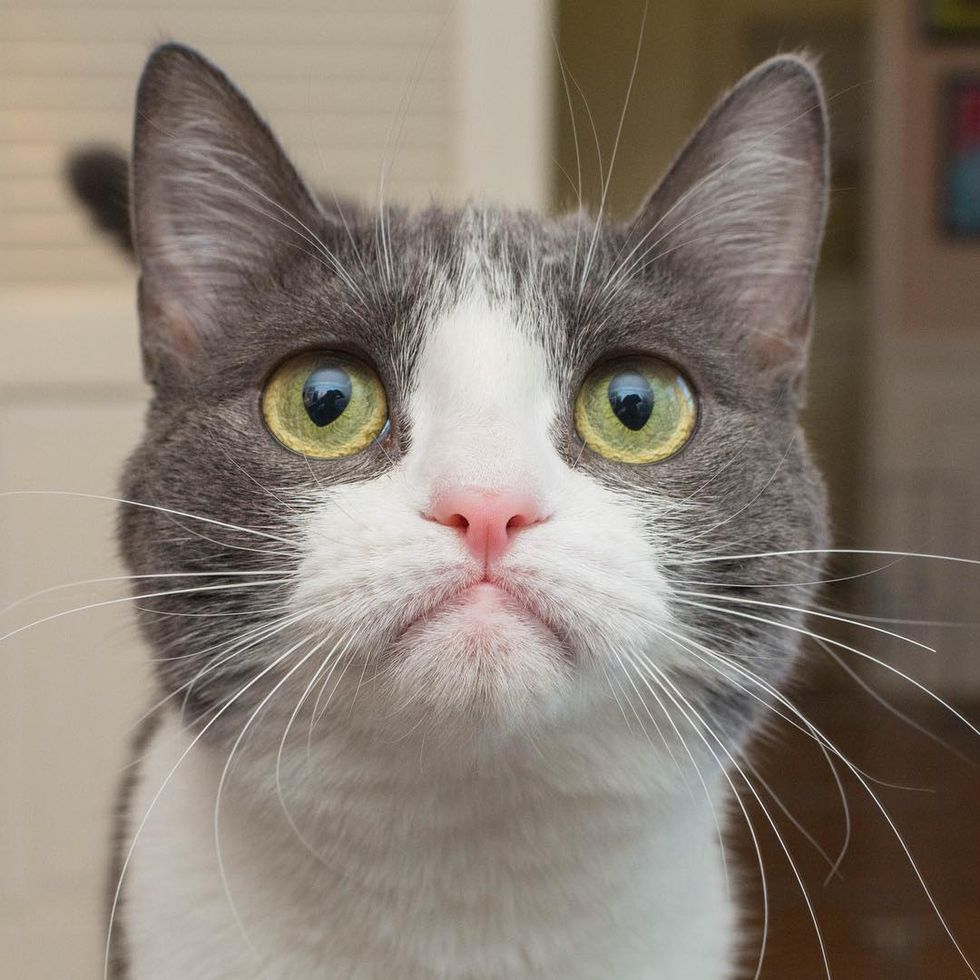 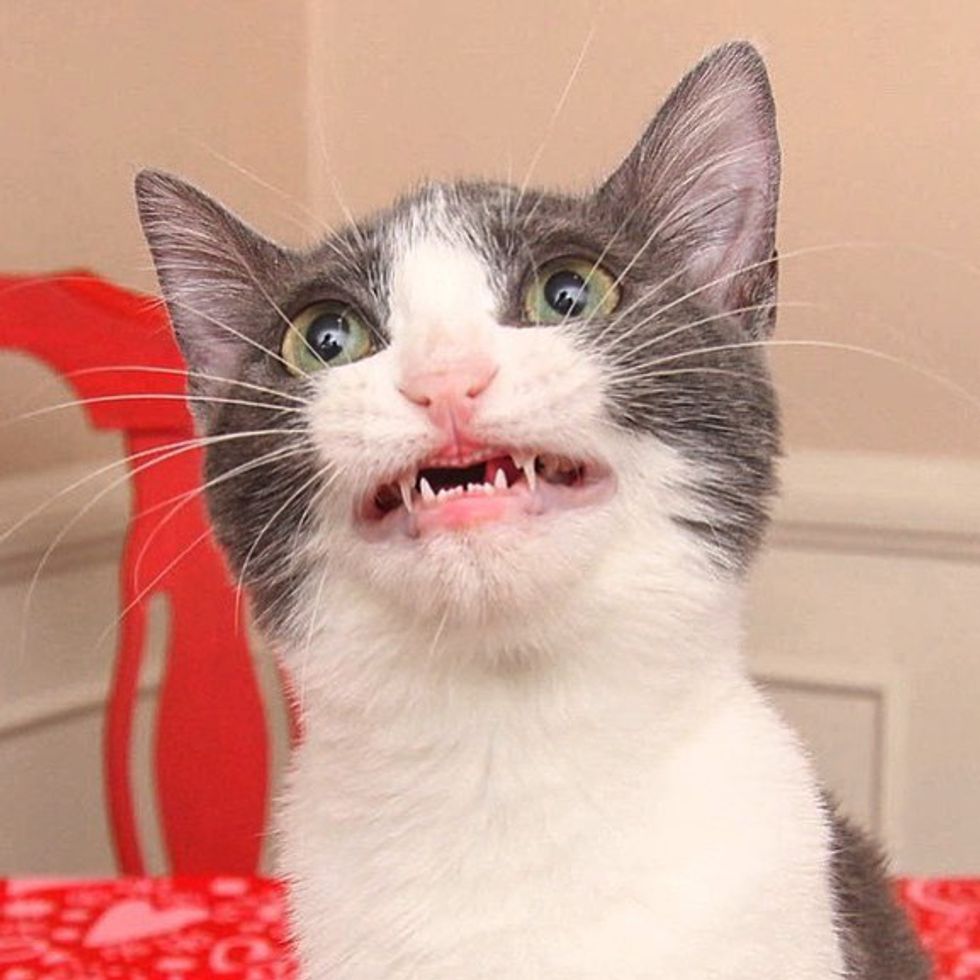 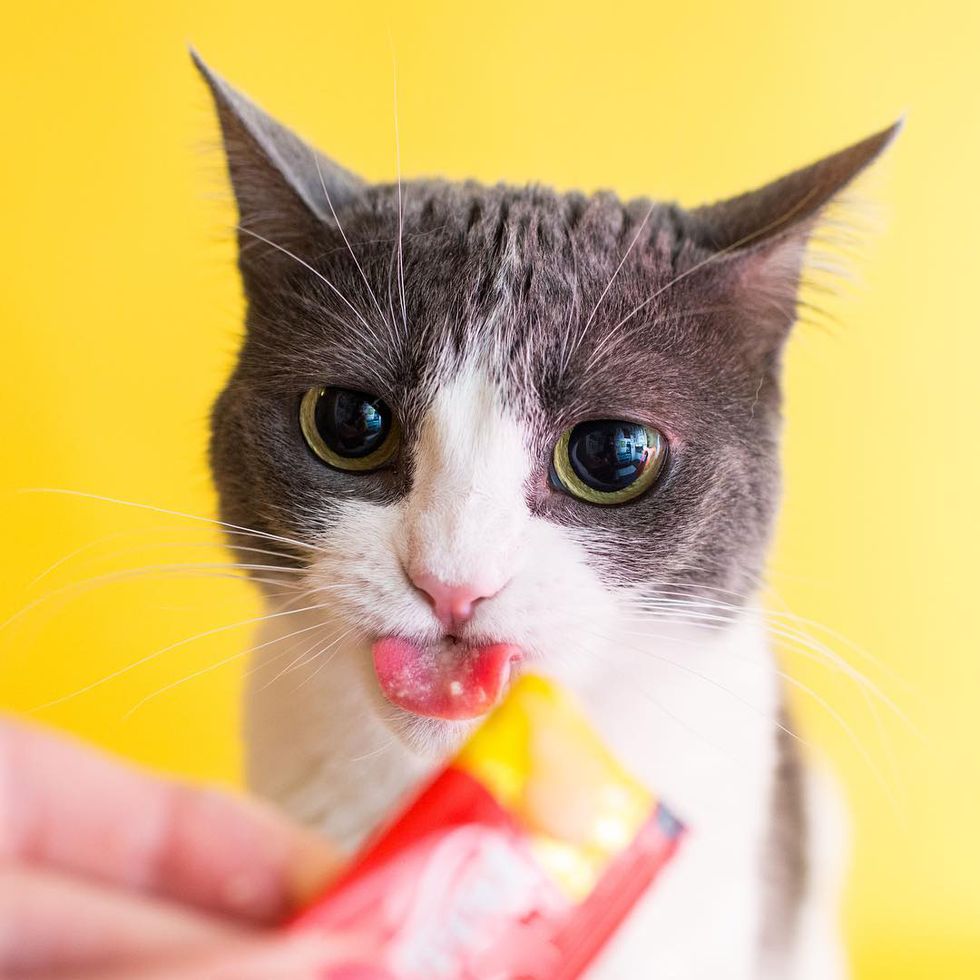 Imogen has inspired her human mom in many ways, one of them is to become a volunteer photographer for animal shelters.

"That spiraled into volunteering for about a dozen rescues and shelters in and around Los Angeles." 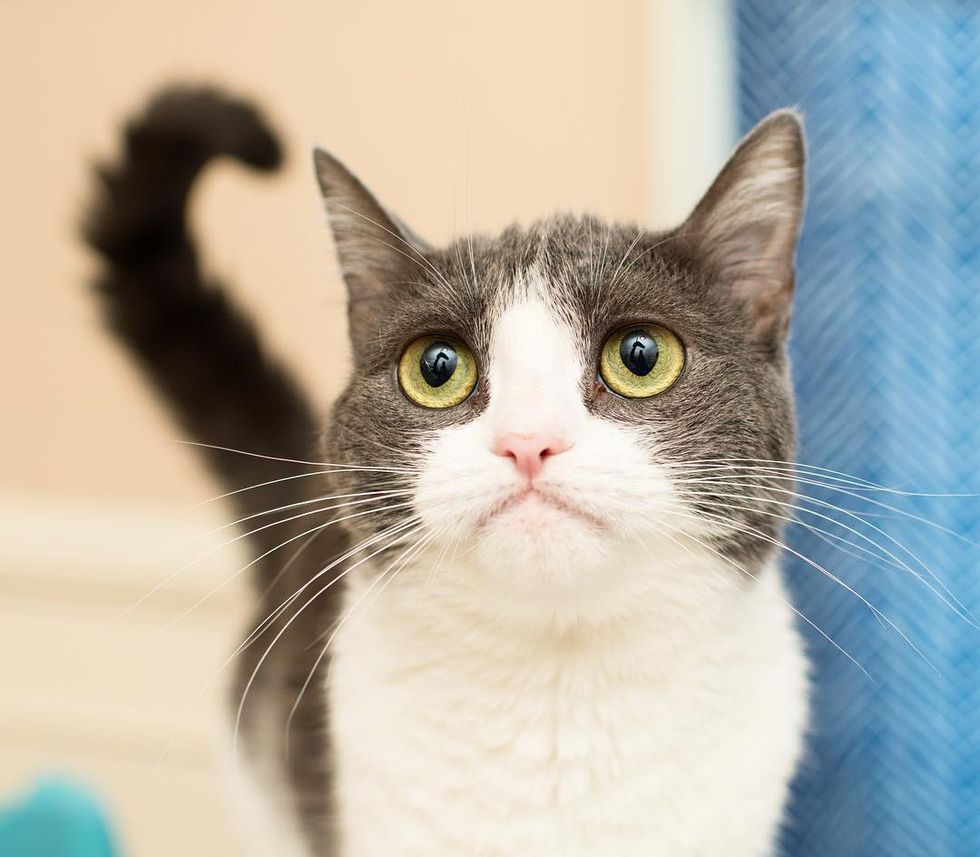 "Photography is very important in helping animals get adopted, especially in a big city like L.A. where there are THOUSANDS of animals who need homes," Casey told Love Meow.

"It is a massive honor that my photos can help animals find homes and that is 100% due to Imogen." 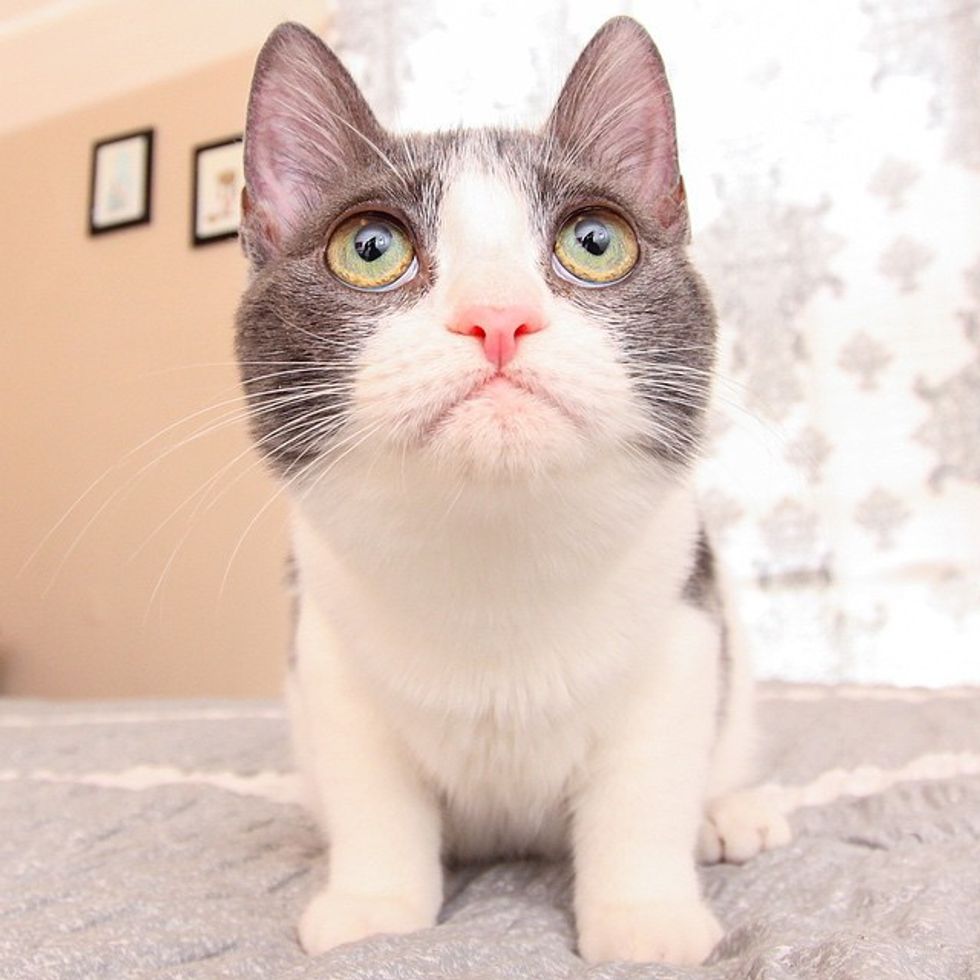 All grown up now! Hear her rawr!

Related story: Cat Stuck in Shelter Over a Year Because Of Her Grumpy Face But She Knows She's Not