Some Called This Wobbly Cat "Weird" Looking but His Rescuers Know He is Perfect and Handsome..

A ginger cat was given up because he was too wobbly to be taken care of, but the kind folks at Milo's Sanctuary took him in and turned his life around. 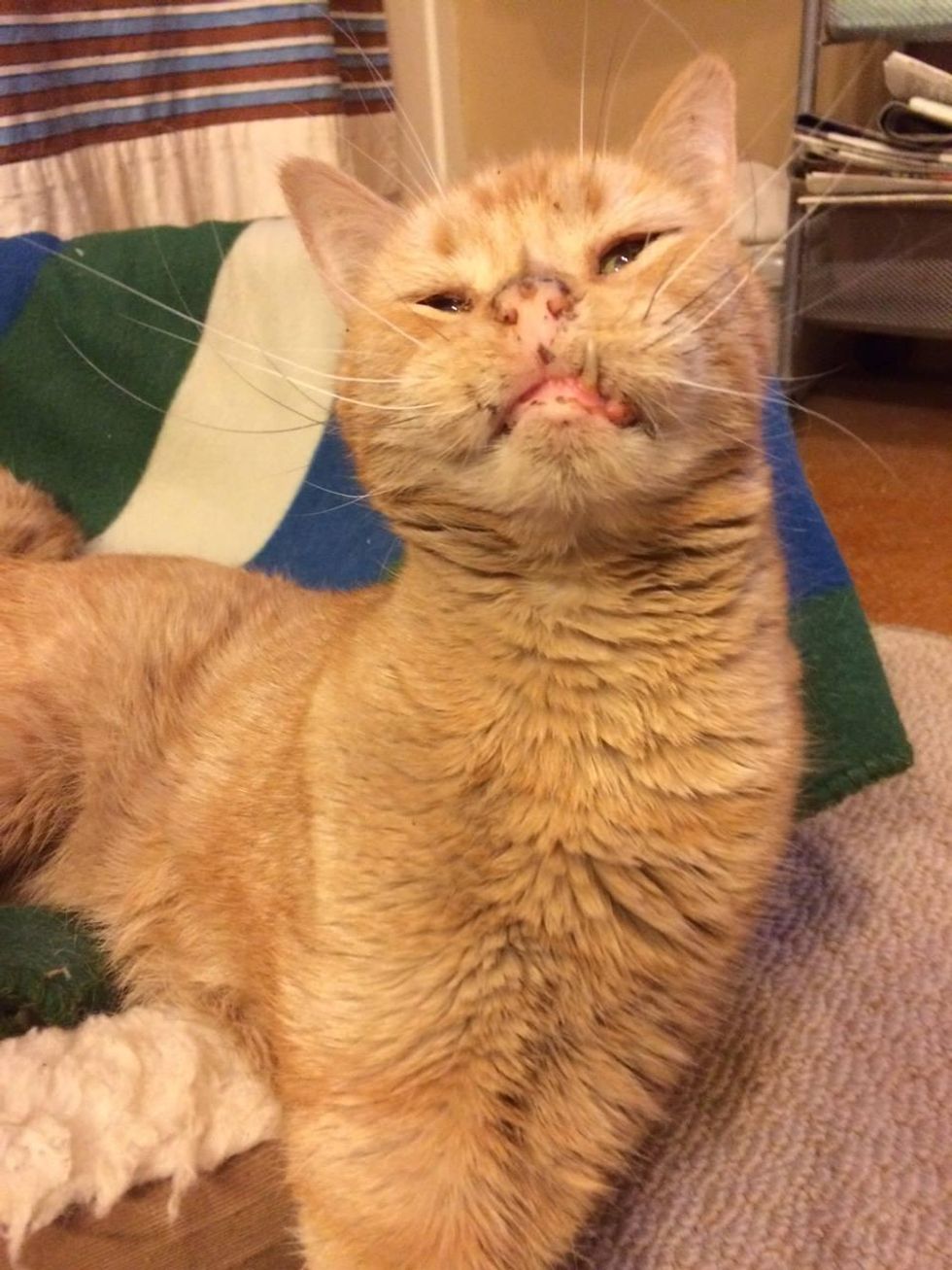 This orange cat is quite special. He has a crooked bottom jaw, one snaggletooth, and is so wobbly that he can't walk, but Herman never stops smiling and purring. All it takes is a second chance.

"Herman is a sweet and happy orange tabby with Cerebellar Hypoplasia, or CH," Milo's Sanctuary said. "CH is a neurological condition that affects motor coordination. Herman also has a deformed jaw, which accounts for his famous 'toof' that juts out on the lower-left side of his mouth. He may also be partially blind."

The ginger boy was surrendered to a rescue group in Colorado in August 2013 when his original family said they were "tired of taking care of him." 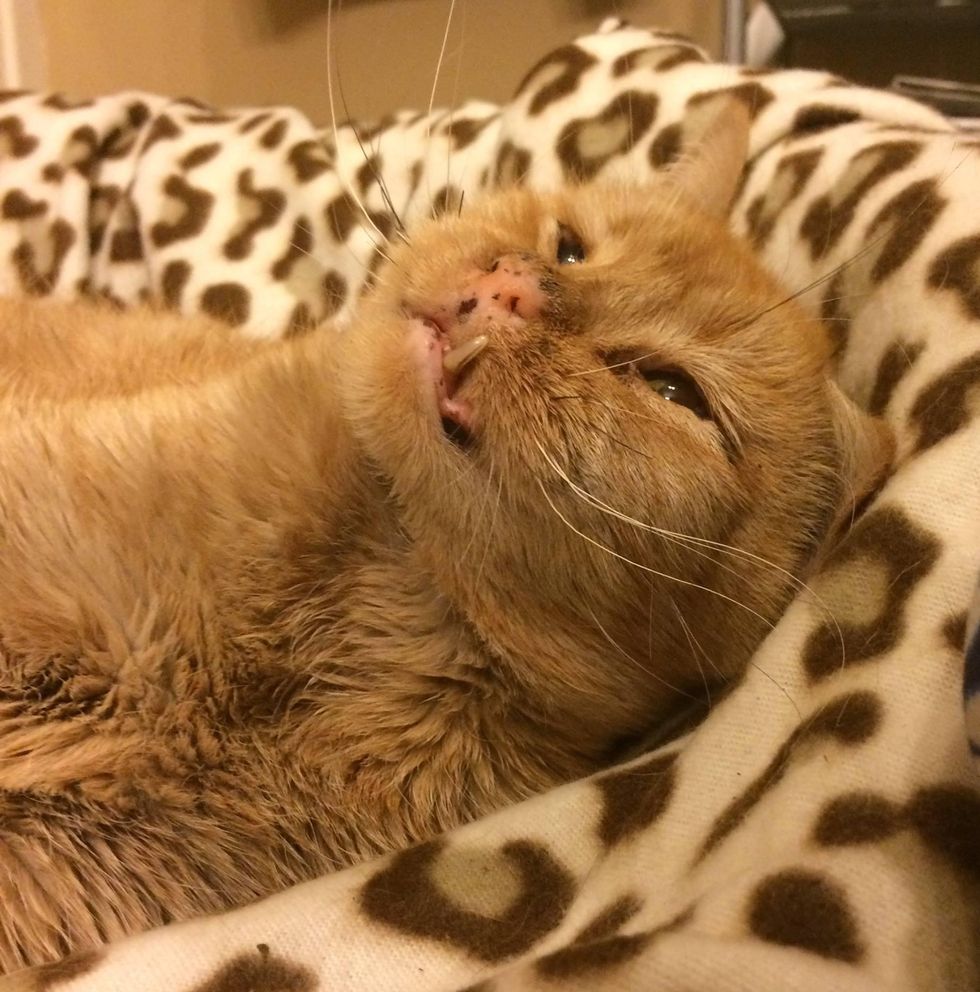 A wonderful fosterer took him into her loving home and cared for him for five months until Milo's Sanctuary (Burbank, California) learned about Herman's story and gave him a permanent home.

"Herman is now living with us, his forever family, as part of Milo's Lifetime Care program," Milo's Sanctuary said. 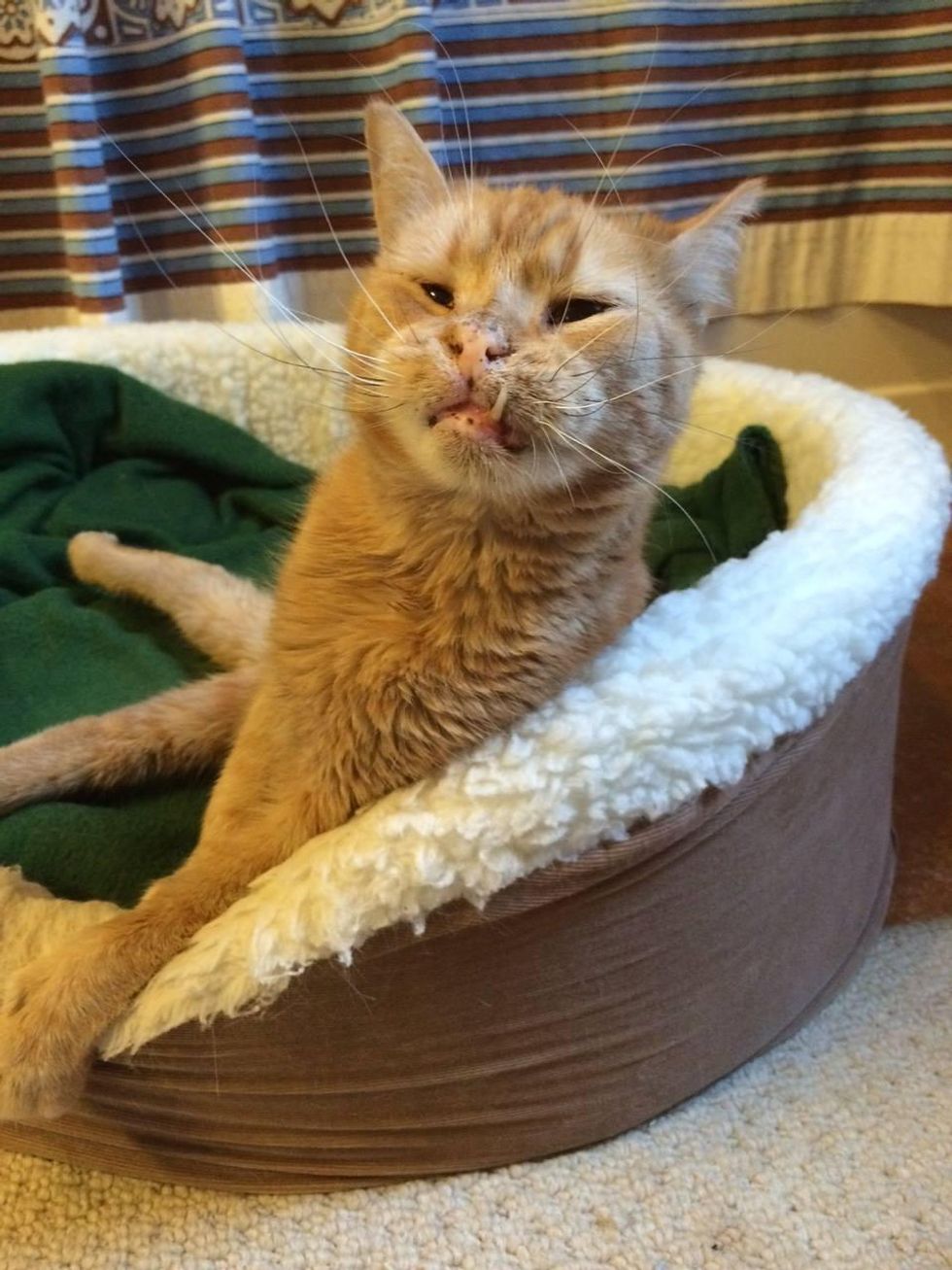 Since Herman came to the sanctuary, he has been a high-spirited, easy-going, and determined little guy. Every morning he greets his human mom by lying on his back with his belly up.

"Herman has become extremely fond of getting his belly rubbed, and will flip over on his side or back to let us know he wants his rubs." 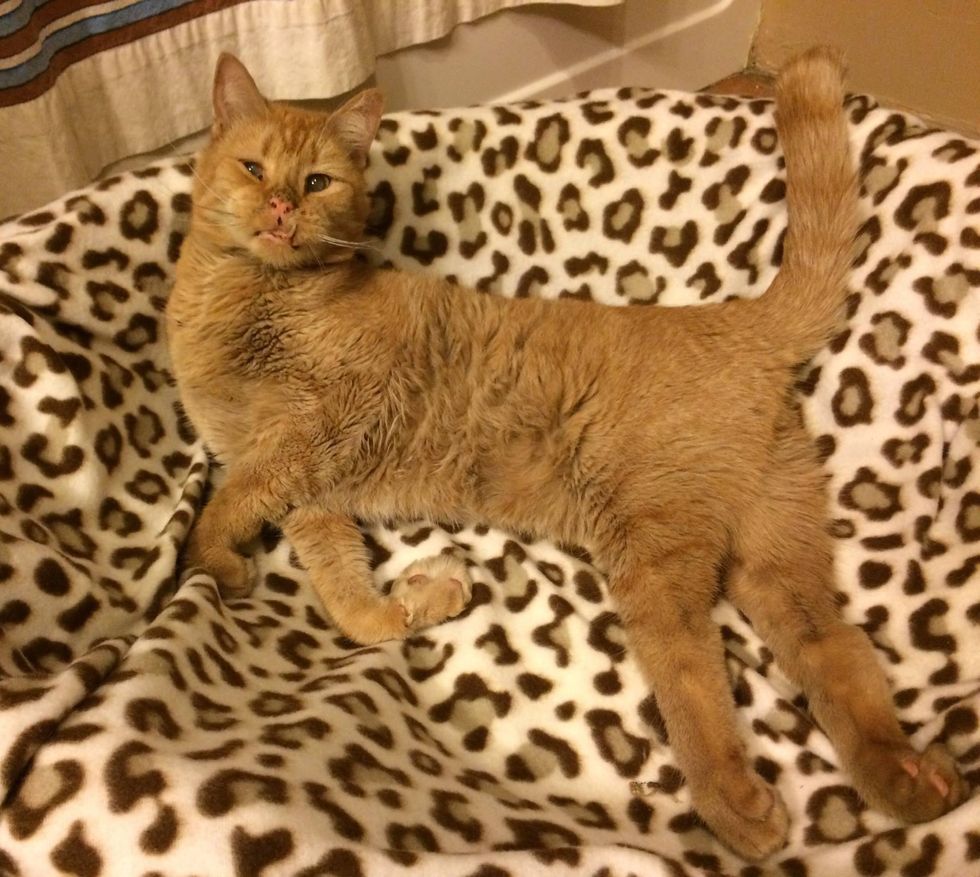 A year ago while Herman was getting his belly rubs and head scritches, he started to flex one paw and then curl it forward, and then he did the same with the other paw.

"He then repeated this moment, slowly, shakily, back and forth… and I realized that Herman was kneading, or 'making biscuits'. In the two years that he has been with us, this was the first time we have ever seen Herman attempt to knead with his paws. For a special needs cat like Herman, coordinating his movement like this took a huge effort. It touched my heart to have this moment with him." 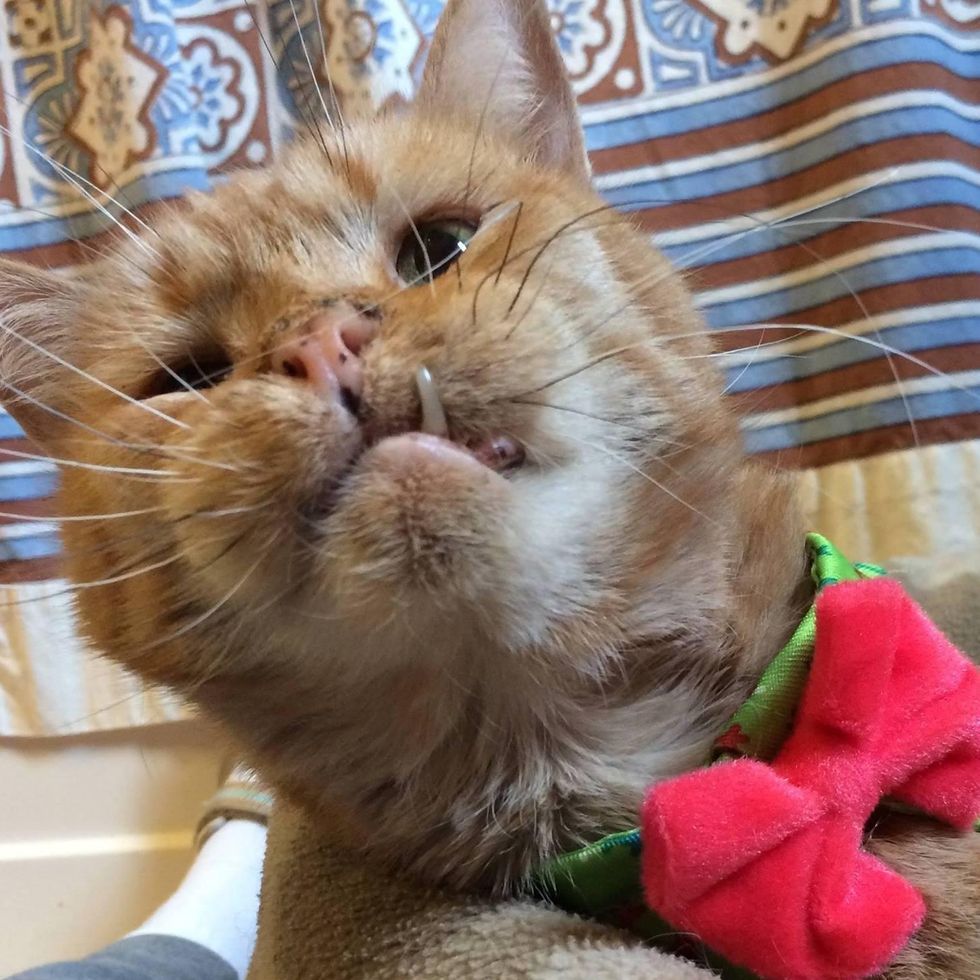 Every milestone he makes brings so much joy to everyone at Milo's Sanctuary.

"Herman taught us about love, strength, and how to enjoy life no matter what your 'limitations' might be. We learned how to care for a high-needs, special needs cat who appeared fragile on the surface but in reality was strong-willed, spirited, and incredibly loving," Patsy of Milo's Sanctuary said. 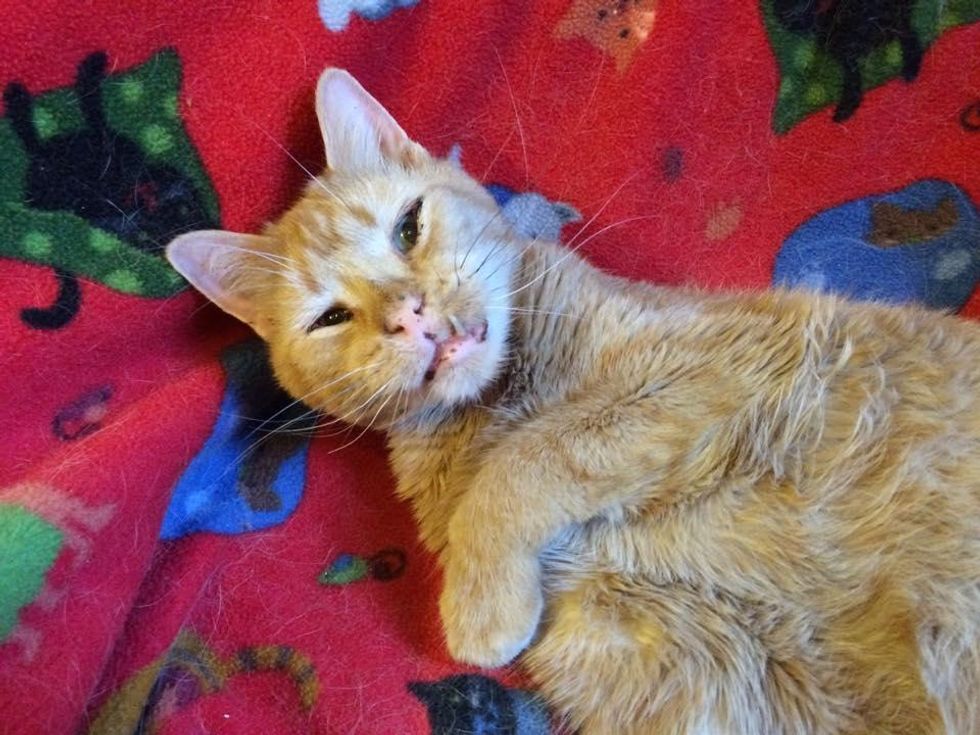 Herman is living happily with several other cats, including a few with special needs.

"Six months after Herman came to us, we adopted another severe CH kitten, Bear, to keep Herman company. (Bear also cannot walk.) Herman quickly settled into his role as 'big brother', and Herman and Bear are good companions for one another." 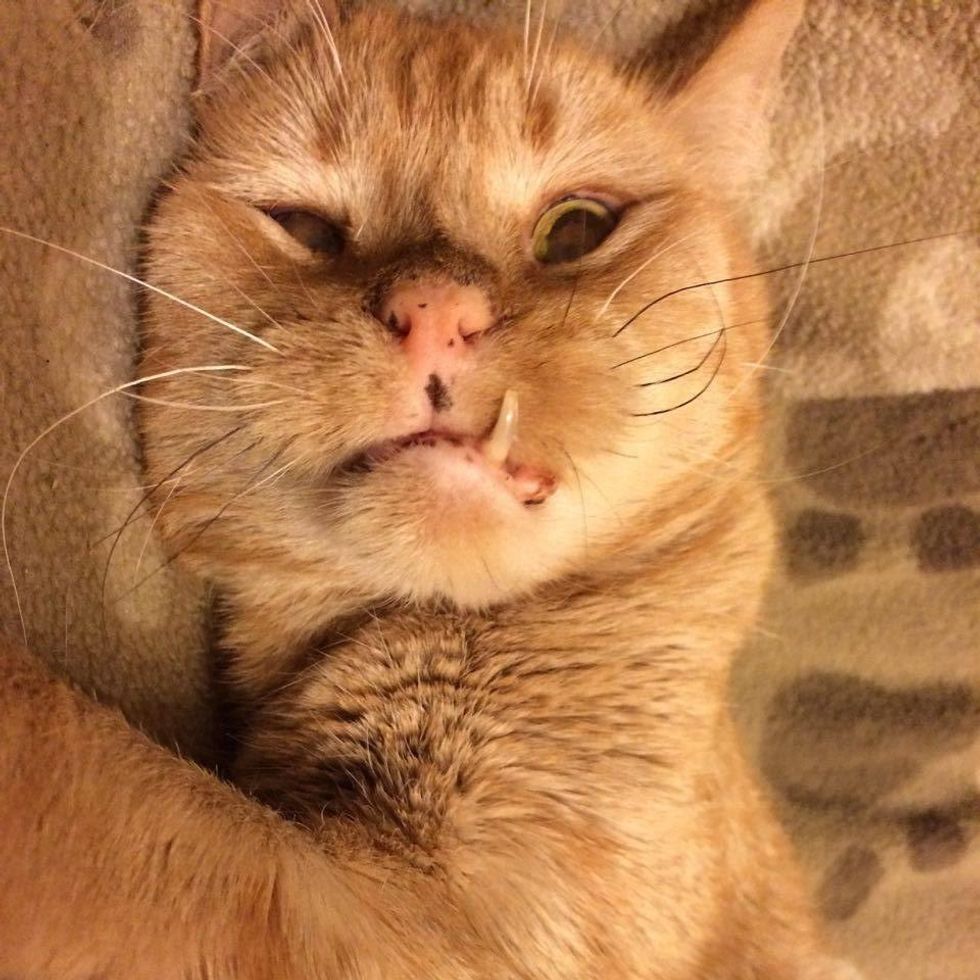 Herman continues to charm everyone with his sweet-natured personality and his herculean heart. He may be a bit different and is very wobbly but that doesn't stop him from loving life. There hasn't been a day that Herman isn't purring.

"Some people have called Herman 'ugly' or 'weird' looking. We think Herman is PERFECT and handsome. He has great character and he loves life." 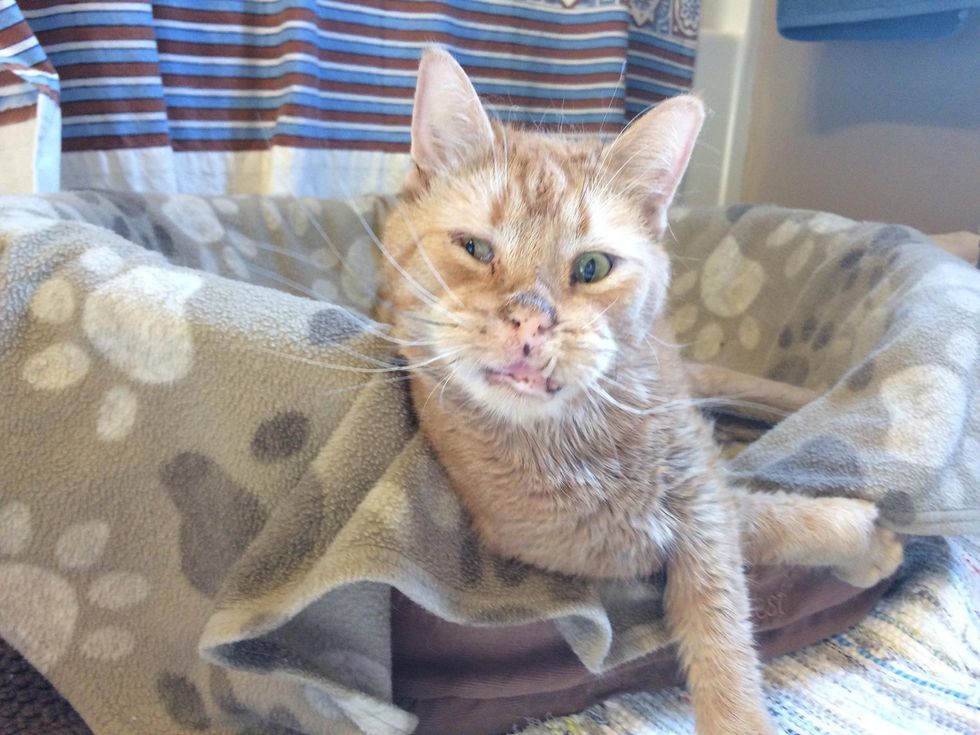 A bit of love makes him a very happy kitty.

One can never have too many belly rubs, says Herman! :)

"We think you will be especially impressed with Herman's slow-motion kung-fu action back leg."

Related story: His Friendliness Almost Cost Him His Life, But This Cat Continues to Love and Trust