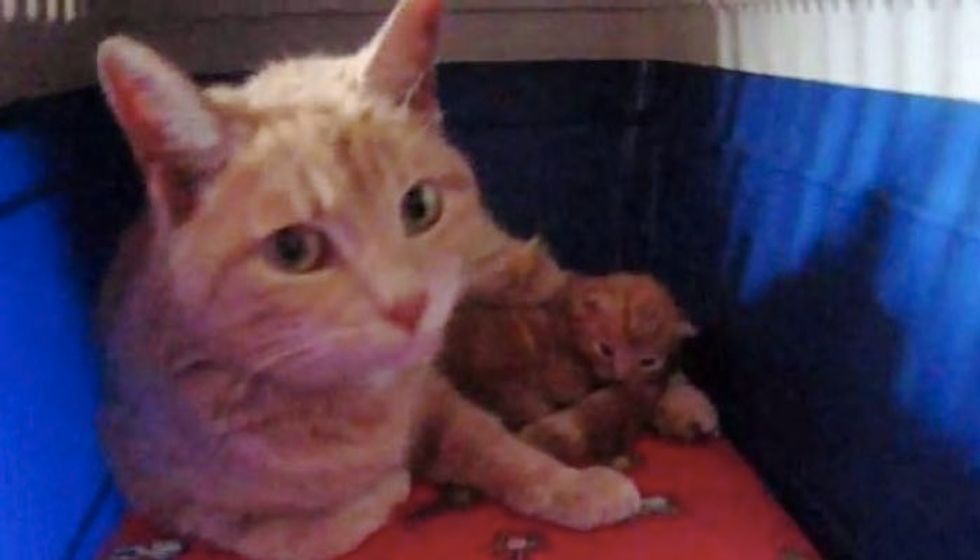 A stray cat who had been living in a burnt down house, came to a family nearby looking for help for her and her two little surprises!

About a month after the house burnt down, a ginger cat started showing up at the house next door looking for food. "(She) was extremely thin and covered in fleas, we couldnt beleive how friendly she was!" Luleymoon writes via YouTube. They named the cat Ginger.

"We took her to the vet to get de-flead and see if she had a microchip, unfortunately she didnt have one and after putting up flyers noone came for her, she also smelt strongly like smoke and had black ash on her so we guessed she was going into the burnt down house.

We noticed she had a swollen belly and engorged nipples, so we assumed she was pregnant, or had had kittens, but with no way of knowing there was not much we could do but make sure she was safe.

About 2 weeks later the house next door was due to be demolished the next day so we knew we had to keep Ginger in the house in case she was living in the burnt down house. We were waiting all day for her to arrive and when she finally did you can imagine our surprise when she brought in a little bundle of ginger joy!

We were a bit shaken up, but she made herself at home in my sister's sock draw and nestled in, about an hour later when we weren't looking she went outside and we had a few hours before dark so we weren't too worried, but when she came back in she had ANOTHER baby! and this one had a badly infected eye.

I think its a small miracle that somehow she knew to bring her kittens into our home, which she had grown to trust, the very night before the demolition," she adds.

They brought the furry family to foster care and helped them find a loving home that they so deserved!

Ginger and her kittens nestled in the drawer.

...and a little ginger boy to the family.

WATCH VIDEO: Stray cat brought her kittens to a family for help.