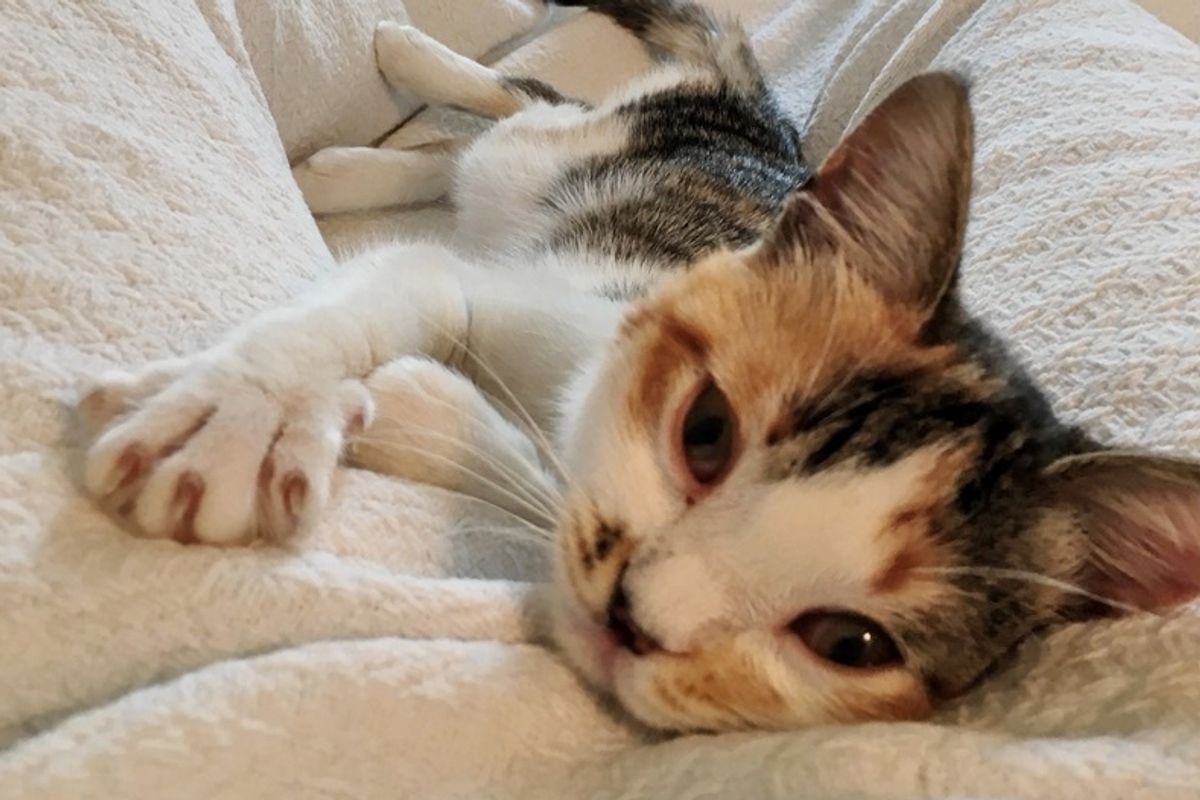 Stray Kitten Found Wobbling Around the Streets, Finds Love - Her First Time in a Home.

A stray calico kitten was found wobbling around the streets of Chicago, all alone. When she was given love and a few pets, she just couldn't get enough of it. 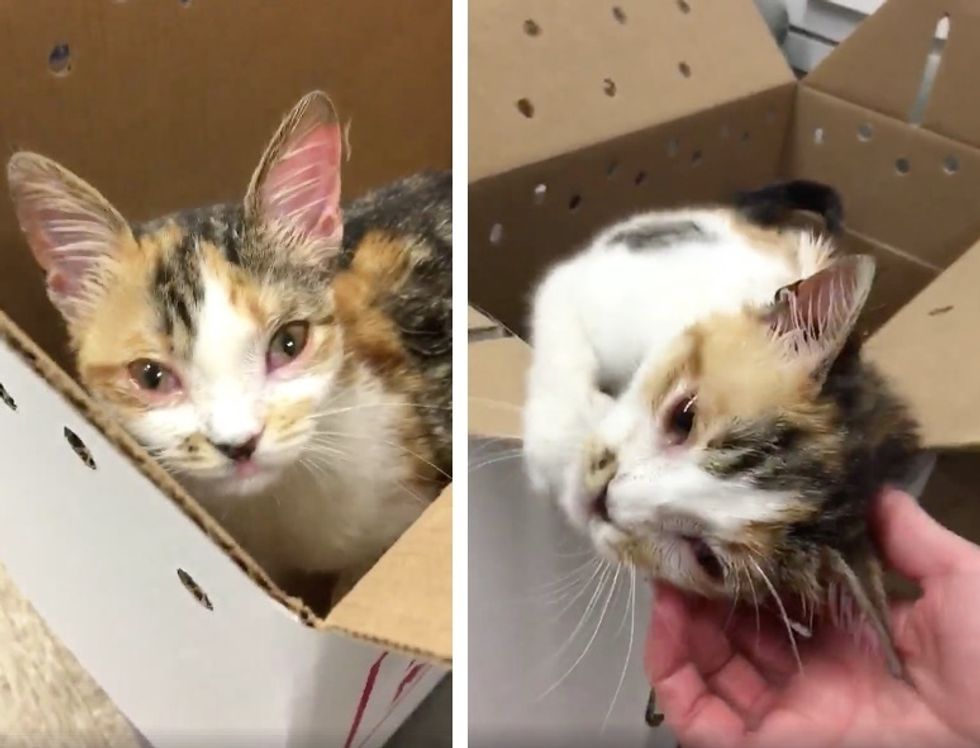 This beautiful wobbly kitty was spotted on the streets as a stray and brought into Chicago Animal Care and Control. A local rescue group, The Critical Animal Relief Foundation (CARF), learned about her plight and rushed to the shelter to take her on her freedom ride the next day.

Right away, they noticed her unsteady gait when she walked. The kitty has a cleft palate and a mild case of Cerebellar Hypoplasia (CH), a condition that affects the cat's motor skills. But nothing seems to slow her down.

The sweet calico reached out to her rescuer, meowing and purring aloud for pets and attention. All she wanted was someone to love. 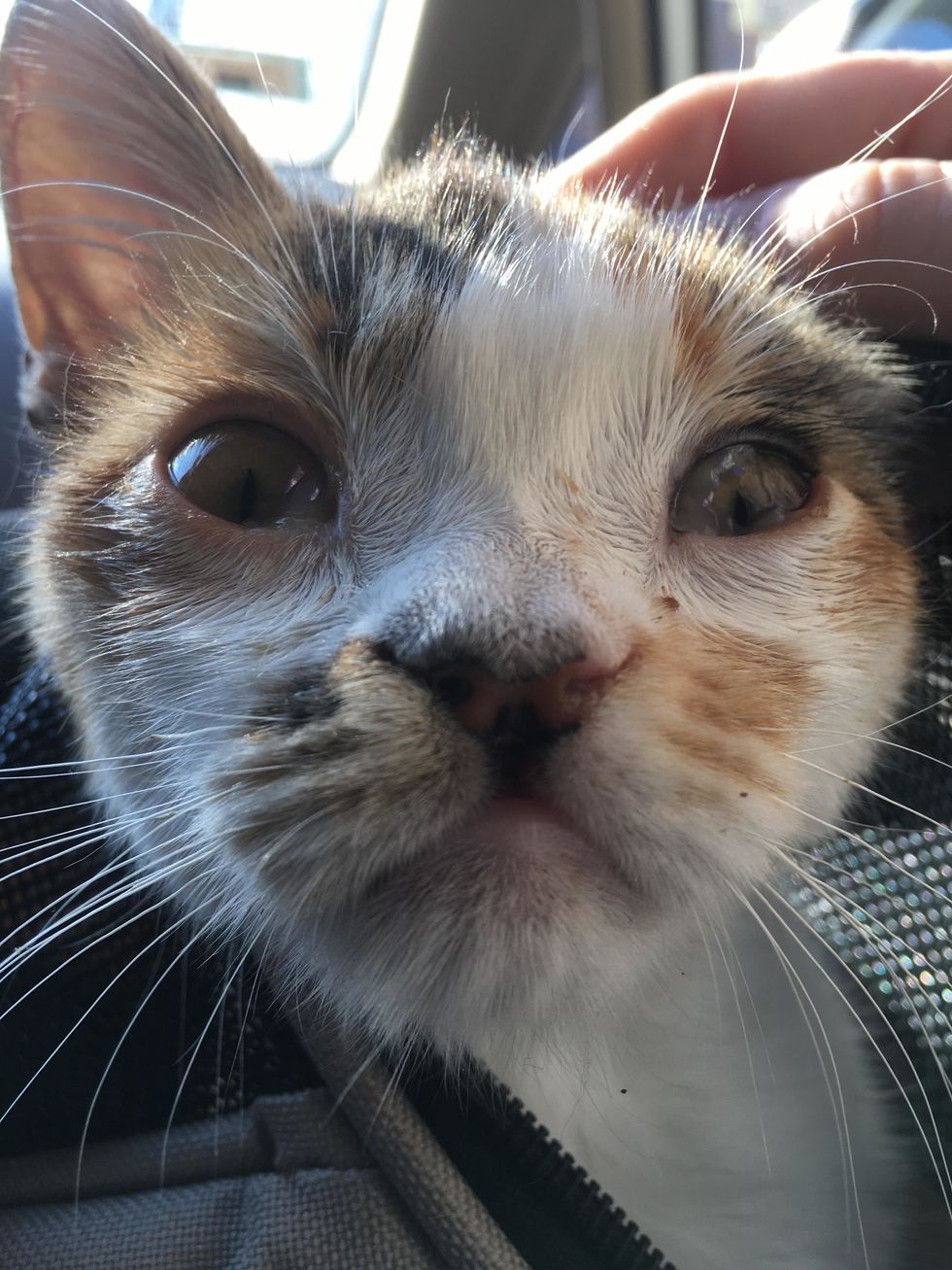 CARF started her on various treatments for conjunctivitis, URI (upper respiratory infection) and a couple of other health issues.

She was placed in foster care so she could have a comfortable home to stay during her recovery and learn to adjust to living with humans indoors.

Lindsay Malinowski, a volunteer of CARF, took her home to foster. (Scroll down for full video)

"When she first got here, she was just so exhausted. She spent all of her time in a lap or on a blanket next to a radiator. She was so skinny," Lindsay told Love Meow. 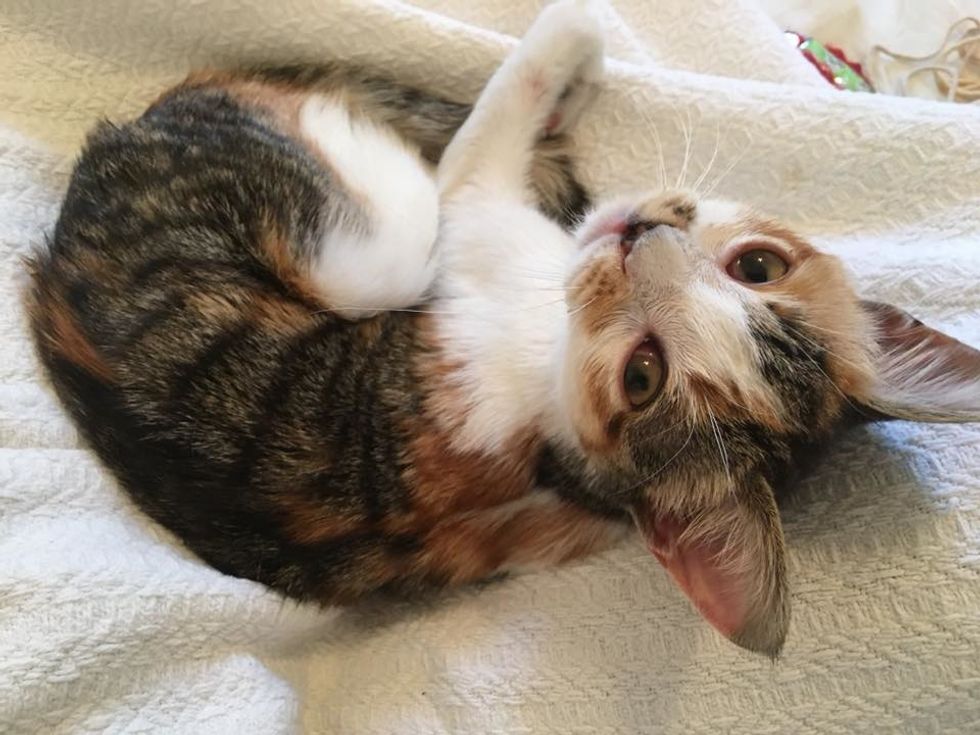 Slowly but surely, the kitty began to come around and even started to enjoy new toys and treats.

"She's still just coming out of her shell right now. She's very affectionate but you have to be very gentle and quiet with her. She's very unsure of apartment life. " Lindsay told Love Meow. 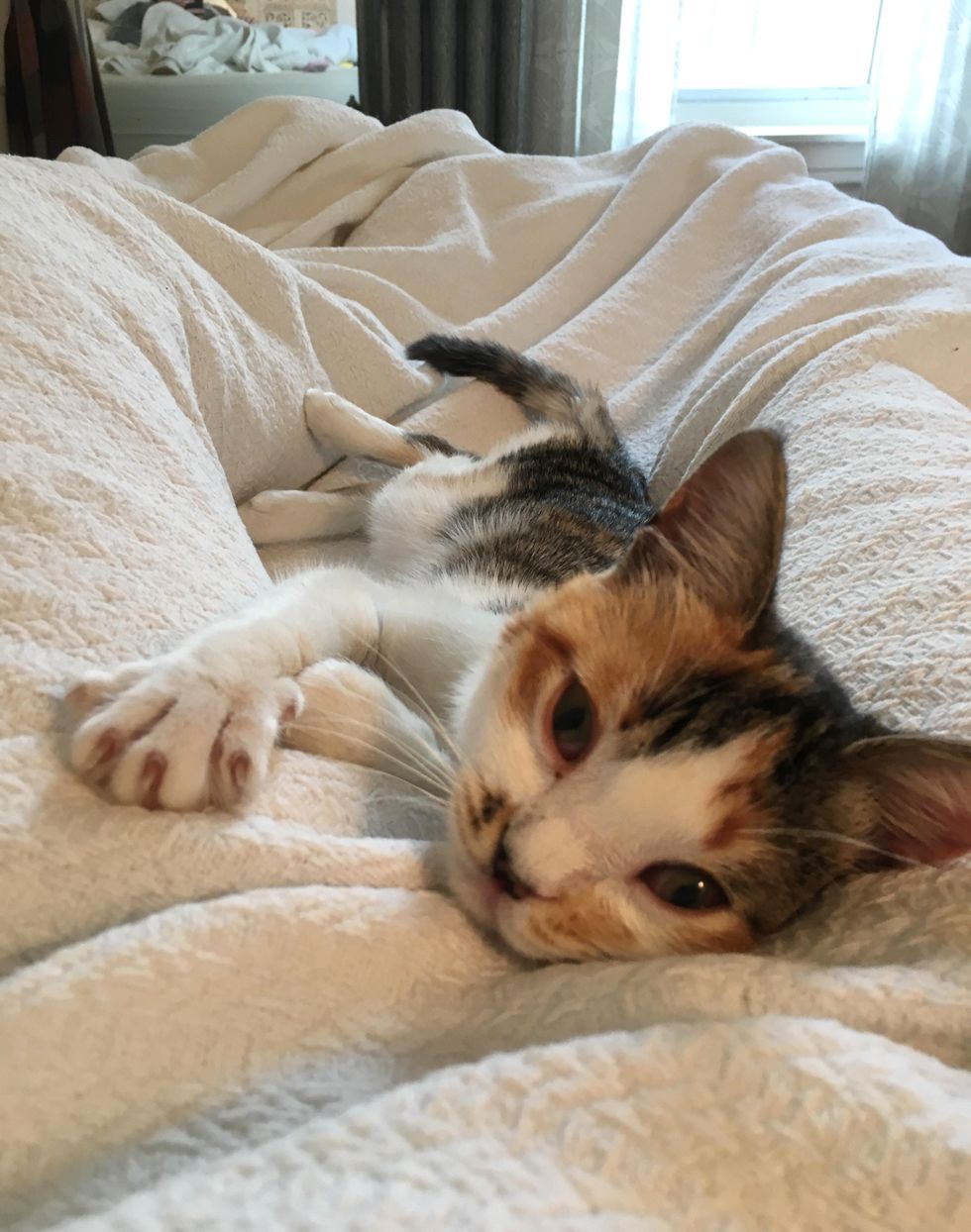 When Lindsay introduced her to her new bed, she was hooked.

Despite being a bit shaky on her feet, she can do anything just like other cats. That little wobbliness only adds to her adorable, quirky purrsonality and charm.

"Her floppies are permanent but it just makes her cuter," Lindsay said. 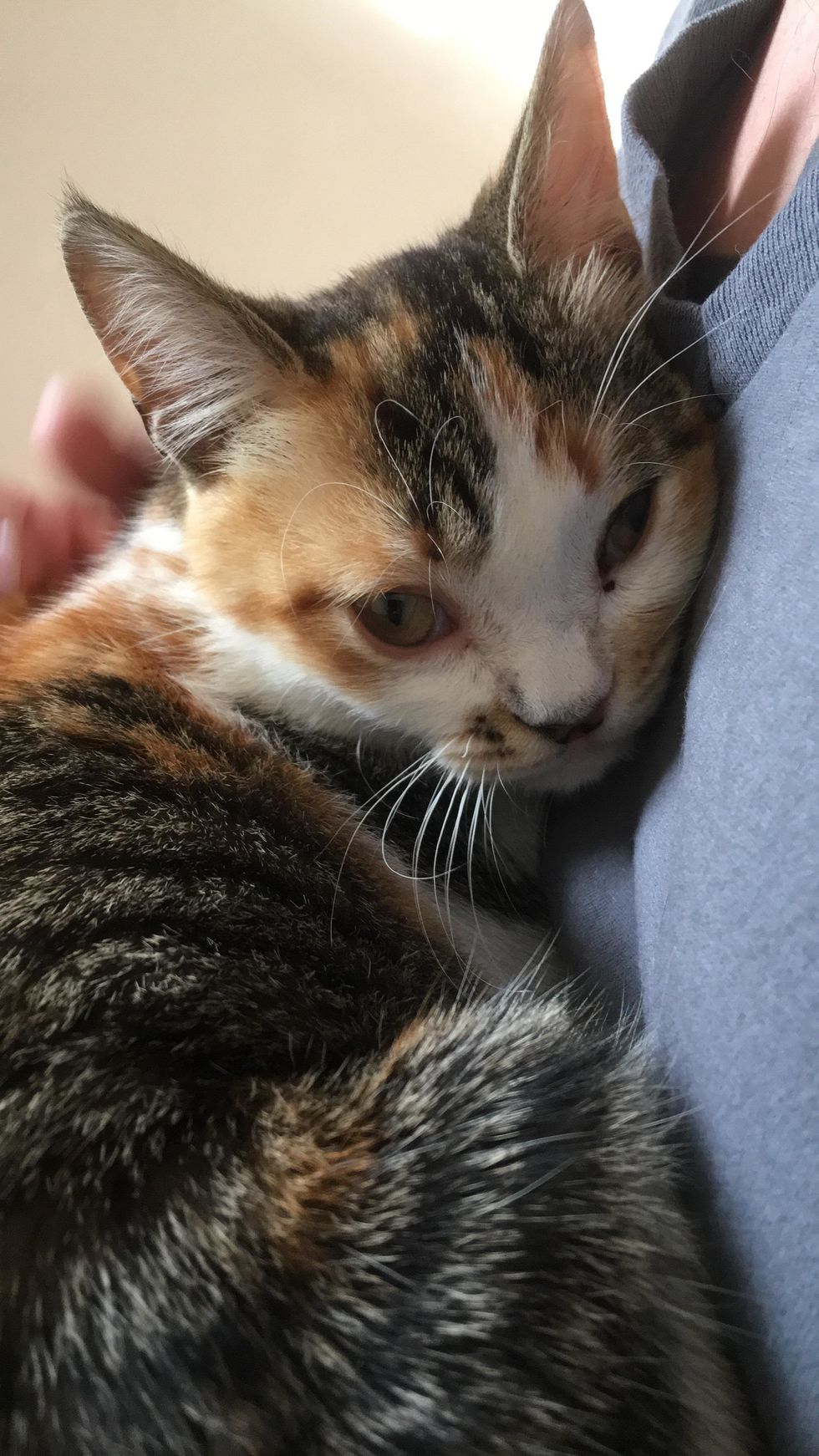 Lindsay has been calling her Kanoo, though they have not decided on an official name.

"She has a cleft palate and a short snoot - it gives her the cutest stumpy face." 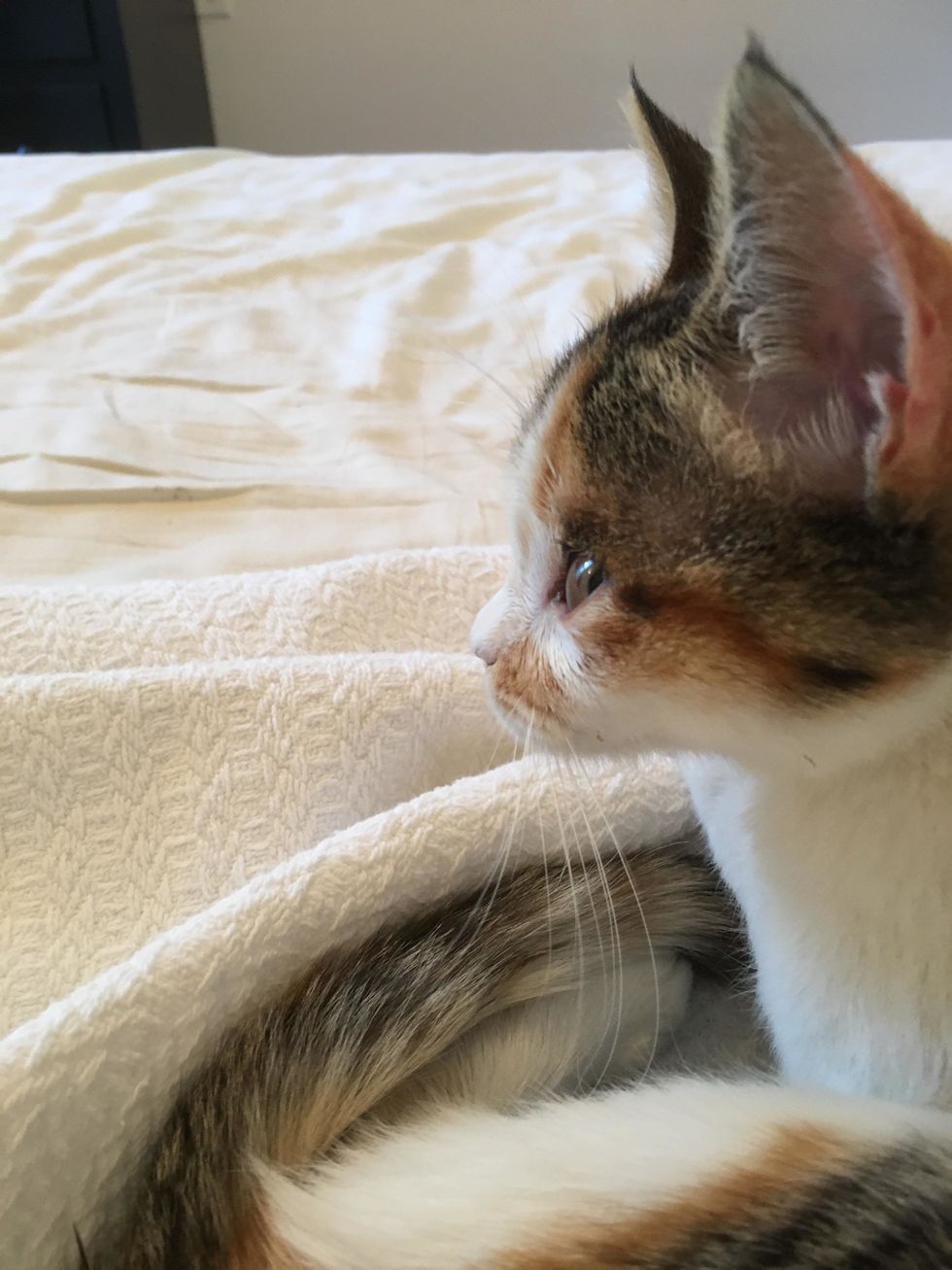 The foster kitty loves to talk but she responds the most when she hears Lindsay's cat Twiggy who is also a wobbly CARF kitty.

Just like the calico girl, "Twiggy doesn't seem to know she's different. She's just herself, and she loves me unconditionally. She doesn't let a little wobbliness slow her down at all." 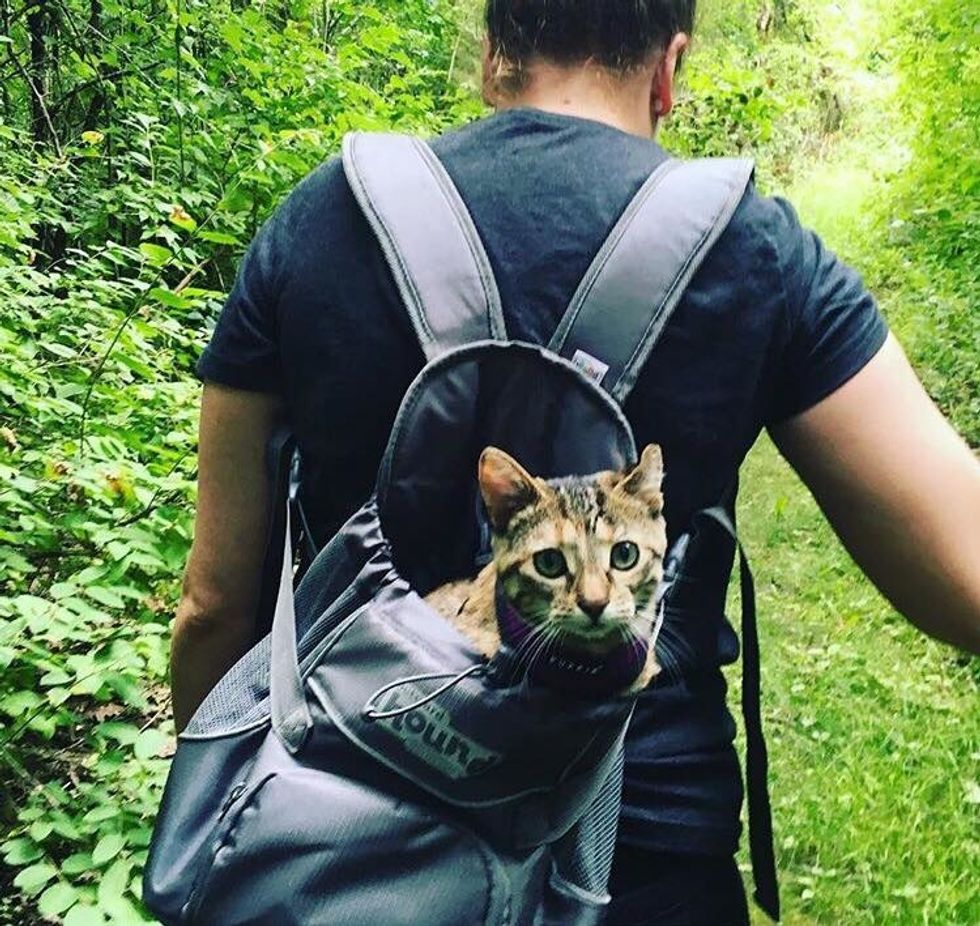 "Now that she's recovering, she can't wait to get out of quarantine and meet her foster sister, Twiggy," Lindsay told Love Meow.

"They chirp through the door at each other all day." 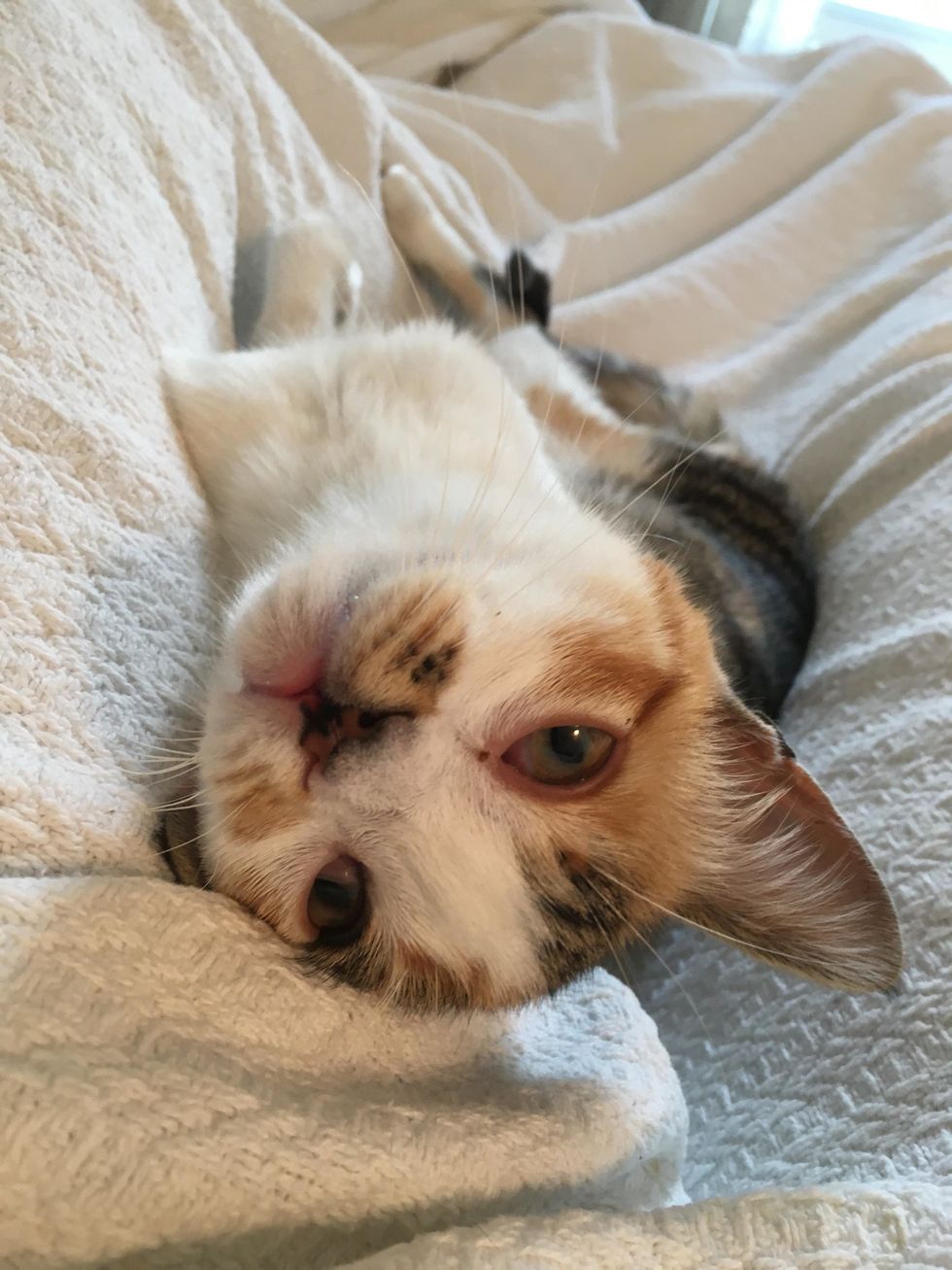 Watch this adorable kitty's story in this video:

Related story: Wobbly Cat Given Up to Shelter Finds Someone Who Loves Him Just the Way He is