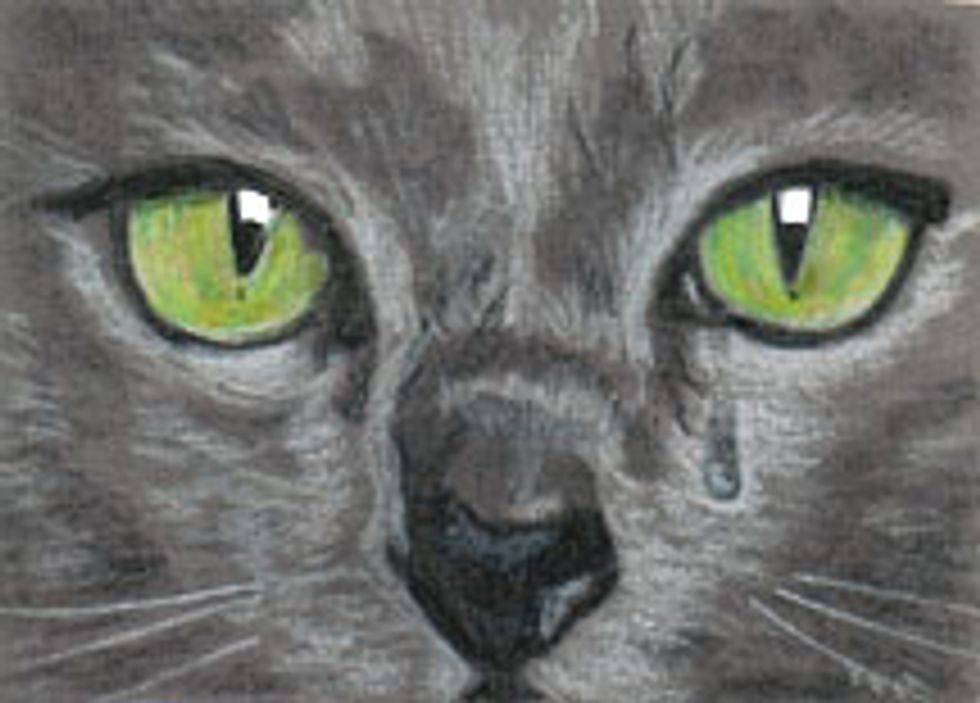 The Compassion of a Cat Named Bird

Caitie was always a cat person. She loved all animals (well, not moths. she felt moths were evil butterflies with no morals at all), but she had a special connection with cats. When she was a toddler her nickname was CaitieCat. She could snap her fingers and cats would follow her around. I never saw a feline that was too feral to be calmed by just a whisper from her.

The picture in this article is a colored-pencil painting I did of Bird. He is the loveliest shade of grey bound with starlight. Bird was Caitie's cat; he had struggled into her lap and claimed her as she looked over all the kittens she had to choose from. He trailed after her like a puppy, allowed himself to be dressed in baby clothes and would chirp to her like a, well a bird.

As a kitten he would hang onto her pants leg as she walked around the house so she named him Burdock. then one day whilst playing he began running around the kitchen like a crazed banshee on speed and didn't stop til he ran into the fridge. He then sat for a minute or 2 and you could almost see the stars circling his head. he had earned the name Birdbrain, Bird for short.

After the diagnosis, a month in hospital and that sweet word 'remission', we made Cait a bedroom in the living room. She tired easily and the stairs became too much. Bird would curl up next to her, squirming her out of the way to make himself more comfortable if necessary. He was and remains a big kitty. She would read, he would purr. When she napped he would stand guard. At night he would start out by her feet only have his head next to her's on the pillow by morning.

Once he woke her up by dropping a (dead) daddy long legs into her mouth! While she was a wee bit upset she saw it as the honor he meant it to be and accepted it with as much dignity as she could muster.

As the word remission morphed into relapse some months later, it meant more hospital stays again. Bird would walk around the house calling for her. He'd drag her favorite orchid-colored bra around with him. He'd carry her much loved novelty-topped pens from room to room, putting them in a pile as if to build a cairn.

Once we returned home the behavior stopped only to be repeated each time we were away.

Bird always slept with Caitie. He might prowl for a bit checking out the food dish or just making his rounds but he returned to her without fail.

That terrible night we lost her, he was frightened by the EMTs and other people who responded to my 911 call. He lurked in the bathroom doorway for a minute but then scurried to hide under Cait's bed.

Out of nowhere Bird appeared and put his front feet on my side of the bed. He slowly climbed up next to me and literally put his face on mine, rubbing at my tears. He then pawed the blanket, crawled underneath and curled up by my stomach, spooning much the way Caitie and I had done so many times.

I finally did sleep, waking with Bird in my arms still under the covers. The knowledge came with consciousness and I began counting how many hours I'd had to exist without my sweet girl... It's been 4 hours, it's been 6 hours...15 hours and I am still here. How is that possible? Four years later I still measure everything as Before Cait Left and After Cait Left.

It's been said that animals are more keenly aware of things than we are. He seemed to know that I was in such pain that words do not exist to describe it.  He had never even slept on our bed unless Caitie was napping there. I like to think that she sent him to me for our mutual comfort. She knew neither one of us could make it on our own.

Bird never once carried anything of Cait's around in his mouth again.  He knew she was gone from this world. Sometimes he will sit and stare intensely at the air with an almost anticipatory look to him, eyes focused on a specific spot. What does he see that i don't?

But that is a tale for another day, perhaps.

I love you, baby.