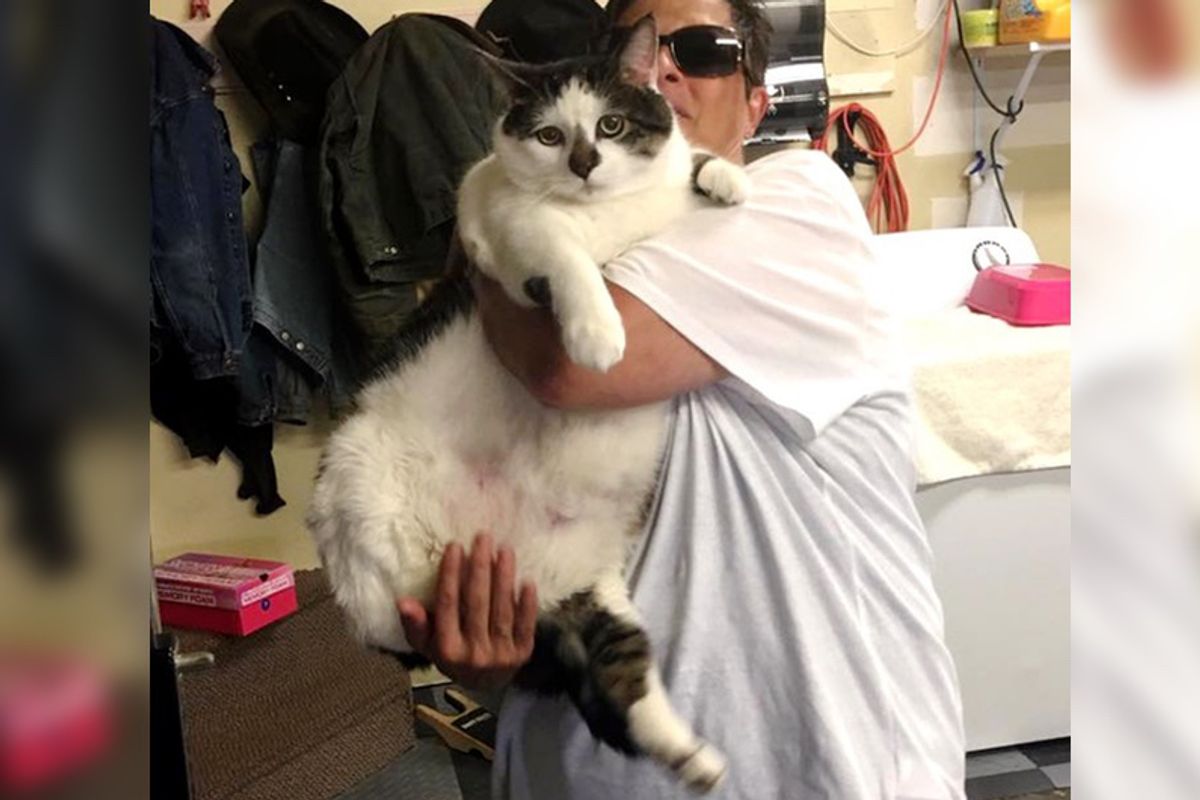 A big kitty was sitting in a small kennel sulking about. When rescuers saw him, they simply couldn't leave without taking him along. 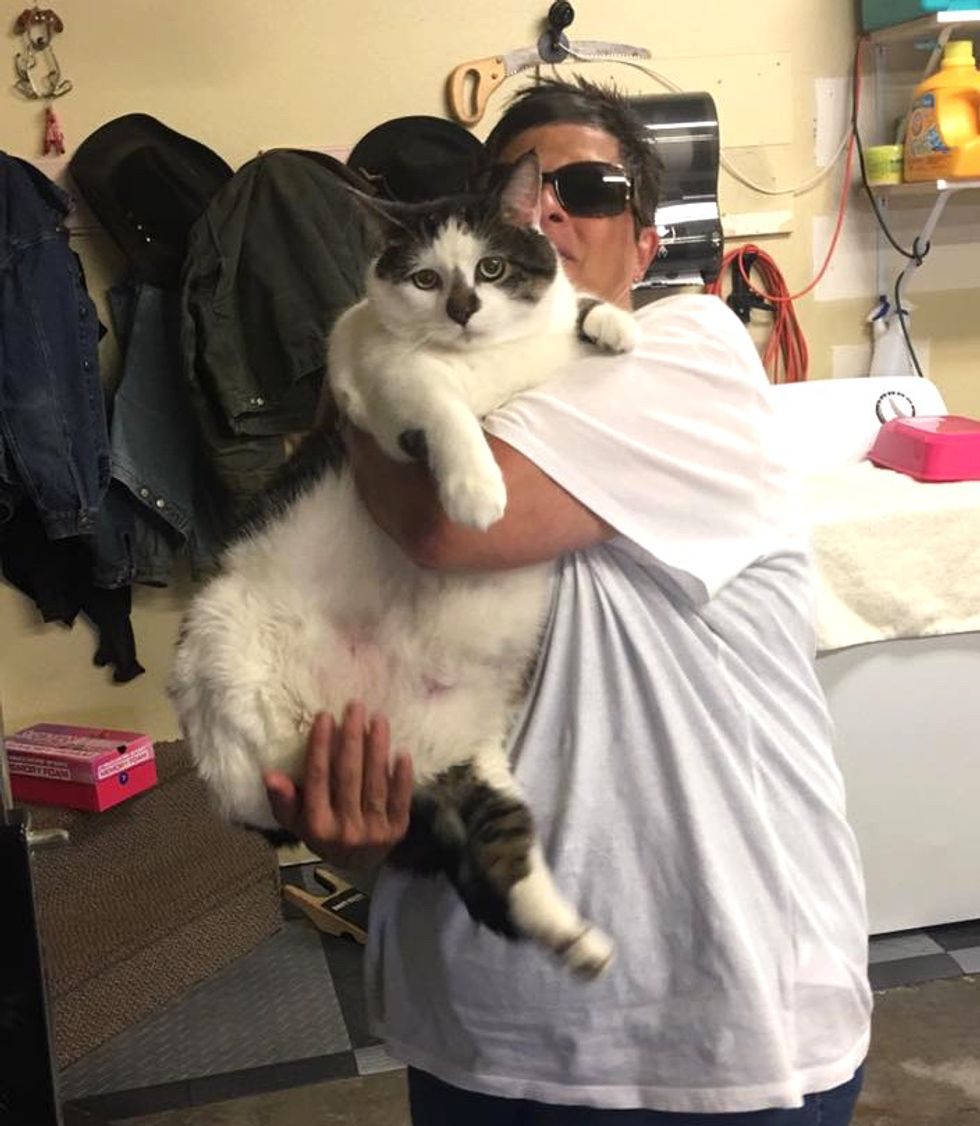 A week ago when rescuers of Kitty City (part of Triple H Miniature Horse Rescue in Mandan, North Dakota) went to pick up a mama cat and her kittens at the pound, they spotted a big kitty who barely fit into his small kennel, sitting there quietly, waiting for someone to scoop him up.

The sad face broke the hearts of the rescuers and they knew that they had to take him along. "He is utterly obese, can't clean himself. He sat at the pound for over a month and then I was asked to take him as no one wanted him. He was 'too fat'. Everyone wanted 'perfect'. He is perfect in my eyes," Kitty City told Love Meow.

They brought the kitty to their beautiful sanctuary and gave him a spacious area where he could walk around and exercise. They are hopeful that the sweet kitty will get back in shape in the months to come. 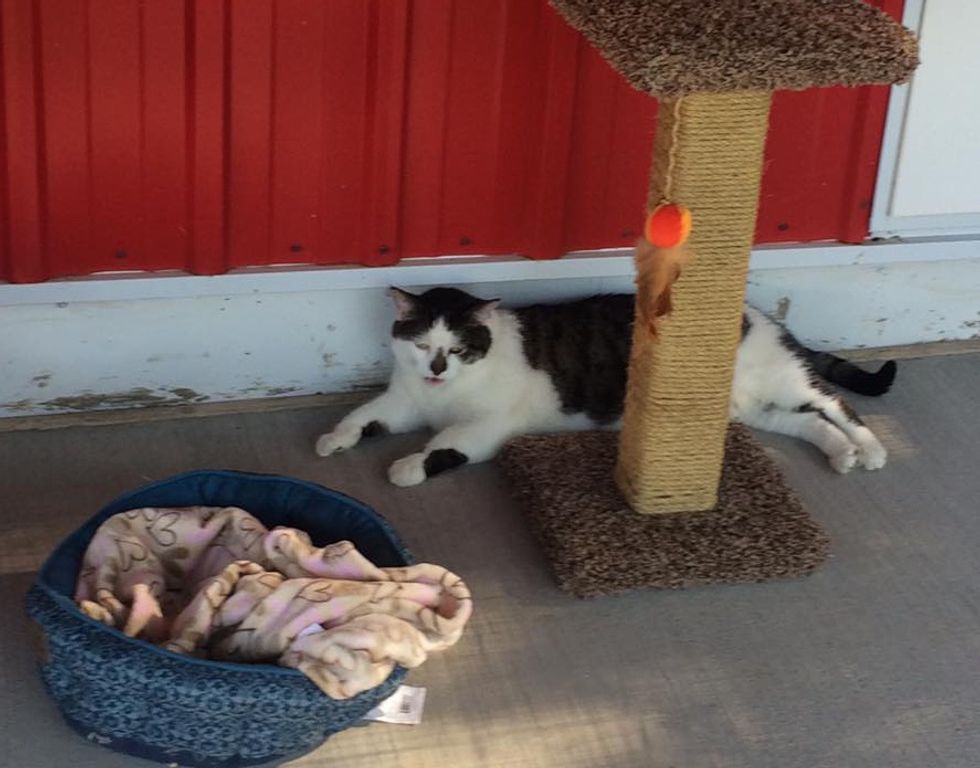 They built outdoor living quarters for the big boy to hang out. "His water and food are on opposite ends. He will get some walking in that way. His cat trees are low to the ground so he doesn't hurt his legs or suffer a fracture jumping from high distances."

Pavarotti is working on strengthening his legs as they are still very weak. "Just jumping off the vet table yesterday and walking to the door his legs were shaking like crazy. His special pre-measured metabolic food should help too." 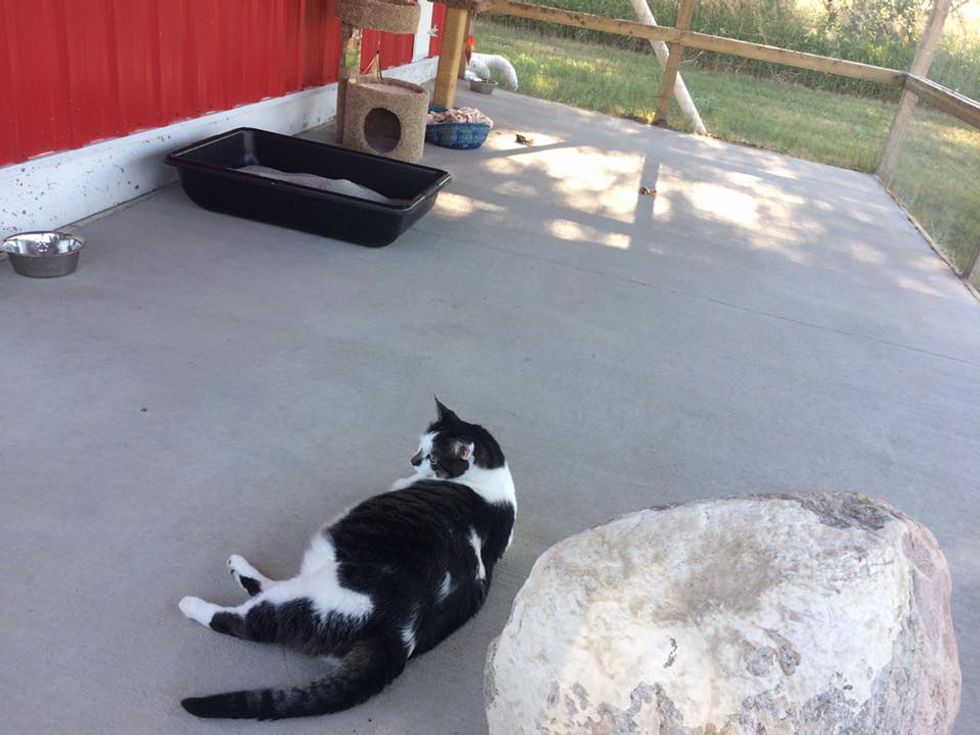 They gave him a handmade crocheted afghan that someone donated, and he loved it!

"It's just what Pavarotti needed to feel just a little bit more at home. He has been quite depressed. He has had a lot of changes in the last month from sitting in the pound for over a month, to a new home, to a new adjusted food, it's a lot to take in." 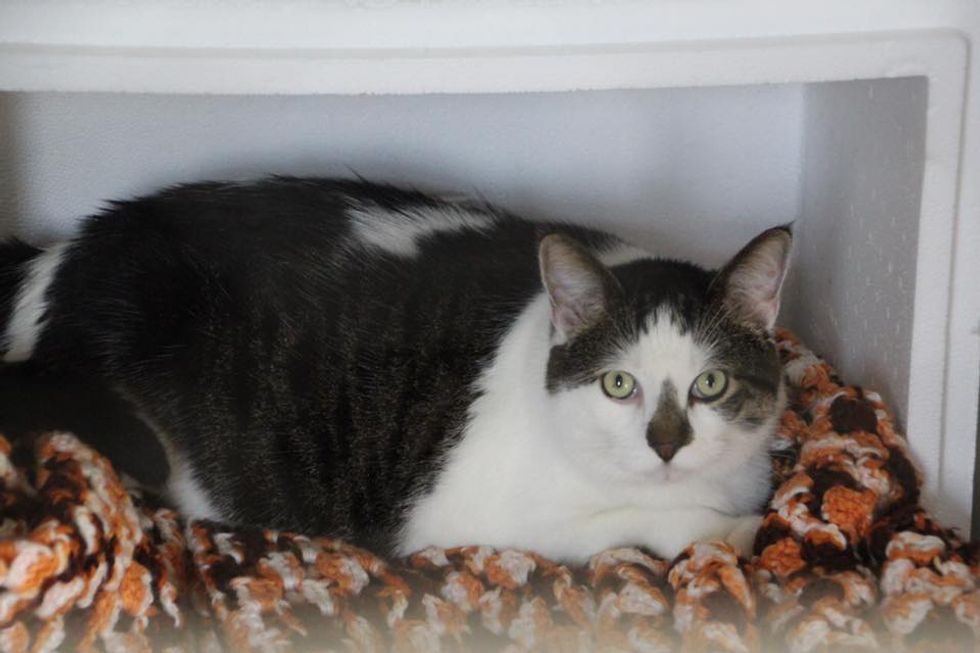 For the first time in a long while, Pavarotti feels loved. 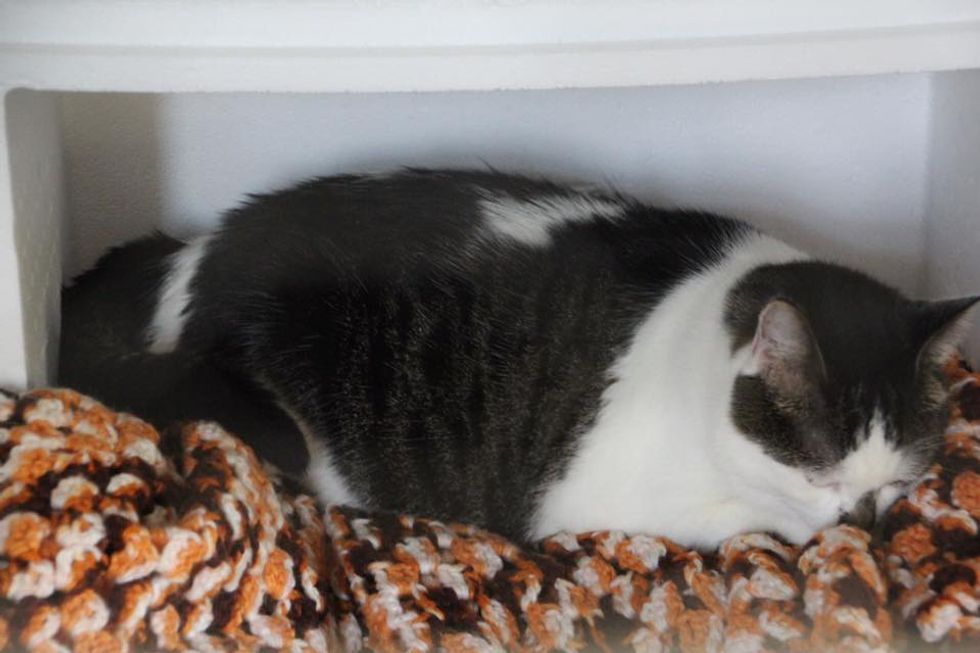 Now Pavarotti weighs in at 25 pounds, 10 pounds over his goal weight.

"We don't want to start drastic or have him hungry so we will follow vets direction and add in his exercise. Also, vet said to get his back shaved as it is greasy and itchy since Pavarotti can't clean himself much it may help with the itchiness he has. A bath is also in order. Baby steps!" 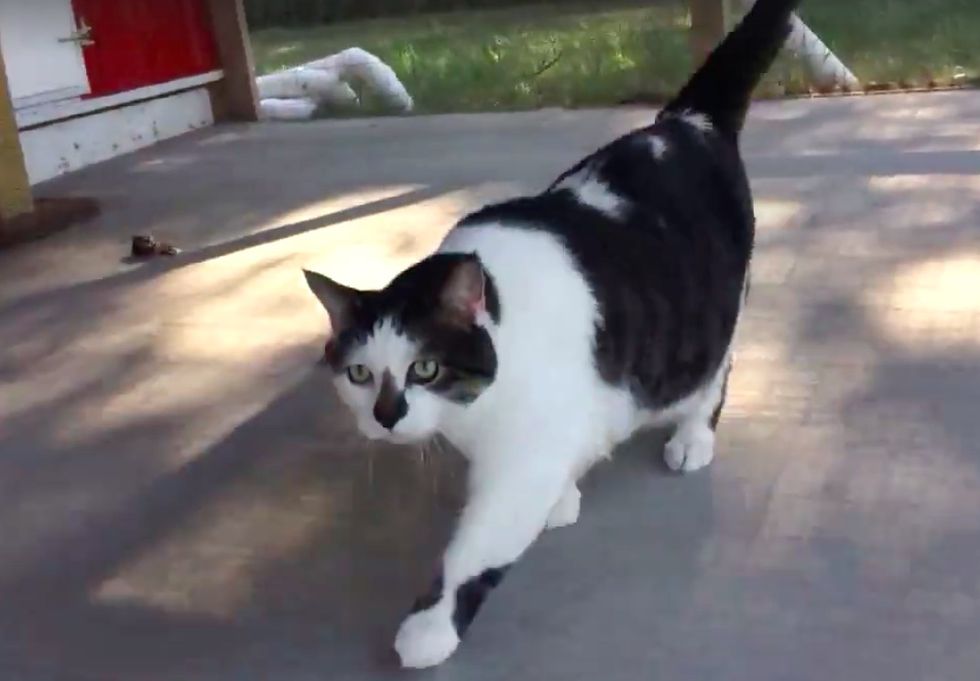 With his new found freedom and all the love and attention they can supply, Pavarotti is the happiest he has been in a long time and can't stop snuggling with his caregivers.

They've helped him get his happiness back! 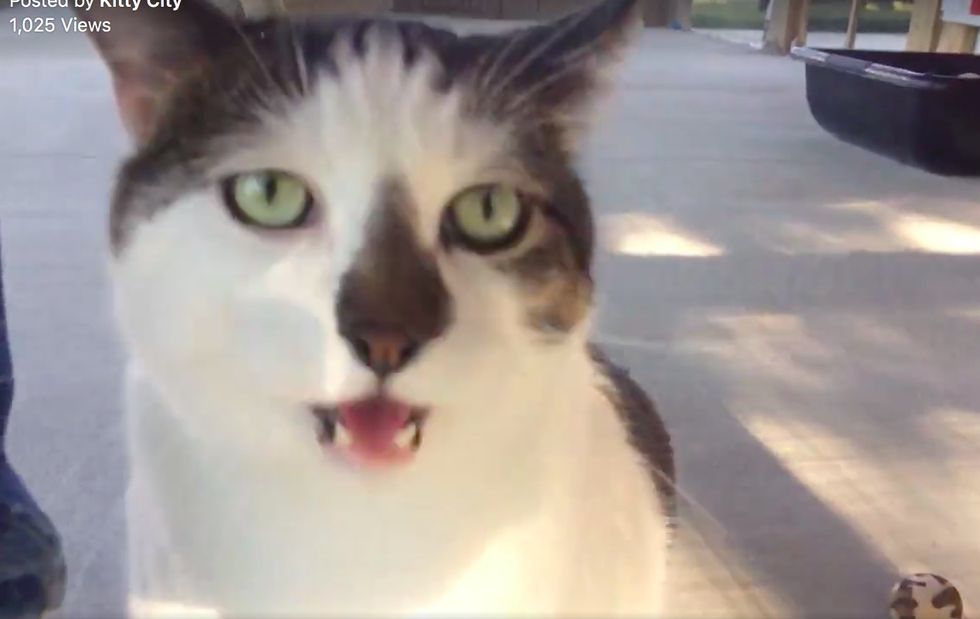 Pavarotti snuggling with his caregiver.

Related story: "Saddest Cat" Finds His Smile After Nine Months of Waiting for His Purrfect Home