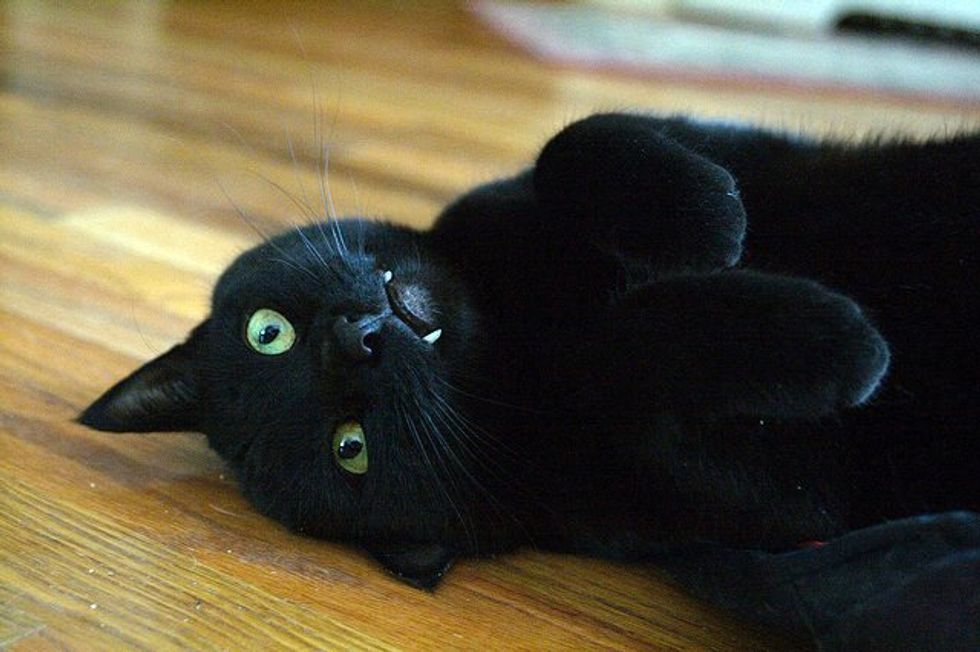 "Ulysses" is the name I gave my black rescue because of the trials he had been through, separated from his home and family by having, probably, been thrown away at the side of the freeway and having to keep himself alive amid constant dangers of freeway traffic, extreme weather, no food or water, and predators, such as dogs, coyotes, and hawks. (The legendary hero, Ulysses, faced 20 years of trials and attacks and danger trying to get back home to Ithaca from the Trojan War. I figured this kitty had been through just about as much.) The veterinarian thought he was about two years old and had likely survived on his own for that long.

I saw him on the side of the freeway at dusk on March 1, 2009 when I was traveling home from California visiting my mother. He was on a grassy spot on an exit-ramp cloverleaf, apparently hunting for his supper. This was in a rural area, with no houses nearby at all. I turned around at the next exit and returned to him; he was still there, but when he heard my car door open, he ran. I saw the direction he went, and prowled around to find him, but couldn't find him...of course, he knew all the hiding spots, and they had to be good ones for his survival. I walked around and peeked into bushes and trees,, with no luck, and dashed across the overpass to another leaf of the clover and searched there, but I didn't find him. I got back into the car --it was cold and windy-- and was about to give up and drive away when I thought See here, he can't have gotten far, so go look again. I walked to the top of a steep hill in the direction it seemed he had first run to, and peered over the side, and there he was, at the bottom, just peeking up out of a hole in the ground; I think he figured I had gone and it was safe to come out. I didn't imagine I could get near him, but I did realize that I had found his home: a hole in the frozen ground, about two feet from the edge of the freeway.

The next day I telephoned my veterinarian to say I had rescued a feral cat and would they be able to examine it to see if it is a lactating female, for it if was, then I needed to return to the hole to look for kittens. The vet's receptionist --get this, where I had been going for 20 years-- said they had an opening for an appointment five days later but nothing earlier, and I said But any kittens will be dead by then, and they said Do you want that appointment or not? I said no, and telephoned a new veterinarian in town to whom I had never been. They said, Come right over! So I went, and learned that he is a boy, so we anticipated no kittens back in the hole. It was during that examination that the kitty broke loose from the people holding him and ran around the clinic in a panic, found the exhaust vent pipe and climbed up into it, headed for the roof. Fortunately, one of the veterinary assistants acted fast and reached up into the pipe in time to grab his tail before he got beyond reach. The doctor said that they usually don't give a cat the whole new-cat treatment all at once, that is, neutering, deworming, Feline Leukemia test, and four or five vaccinations, and eye medicine to take home, but the veterinarian said that it was so traumatic for him, being handled, that we should do the whole works at once and not put him through the stress of coming back for more again later. So we did. At one point the doctor said You know, you might never succeed in taming this cat.

Ulysses came home. He was thin --weighed 6 pounds-- his fur was dry, rough, wiry, and thick, and he was very scared. He stayed in a kennel box, about 2 feet by 3 feet or so, in the living room. for about three weeks, so he could see and hear the rest of the family and learn that there would always be food and water and a clean litter box for him. When I finally opened the door to let him come out of the box if he wanted, he didn't. I forget how long it was, but he did eventually come out. He felt the safest place was behind the toilet in the upstair bathroom, though he was perhaps also attracted there because of a large radiator, so it was very warm there. He snuggled up next to the radiator, in the corner, beside the toilet. I brought him food and water and talked with him and sometimes closed the door to the room so he could have privacy and feel safe. We went on that way for a while. He eventually let me pick him up and talk to him and pet him, but he was still quite unsure whether he was safe or not. It took a long, long time. He slowly met and made friends with the rest of the family, and I think they helped him; he could see that they were confident of their safety and were happy to share their food and water and litter boxes with him. I don't recall any fights. You asked how we managed to tame him, and I think it was by his observing the household routines and the other cats' calmness and having food and water and litter box. He ran from me for months, as I recall, not letting me get close, not willing to trust me nearby when he ate. I could only touch him when he was behind the toilet, and then only because there was no escape, I suppose. It took a long time. But there was constant, slow progress. And he made friends with other cats in the family and took cues from them. I think that helped him a lot.

It's been a year and a half, and Ulysses has shown us what a sweet, loving creature he is. He is now 13 pounds, sleek, soft, and gorgeous. Curious about everything. Loves to be part of whatever is going on, especially in the kitchen! Loves being held and petted and told how wonderful he is. Loves meeting and flirting with human friends. Likes going outdoors into the enclosed cat pen to snooze in the sun with other family members. He loves to wrestle with the next-youngest family member; they play kitty games and chase each other endlessly around the house and curl up together for naps.

Ulysses is very, very smart, to have survived as he did in that terrible place. The veterinarian said in that first examination that he was in remarkably good condition for having lived where he was living for as long as he had. I am so grateful that he came to live with us, and that he kept himself safe and well in those horrible circumstances until I could rescue him. I thank him every day for going out hunting when he did that afternoon of March 1st so I could see him when I did, and for going into that live trap and thereby giving me the chance to give him a better life than he had. I love him very much.