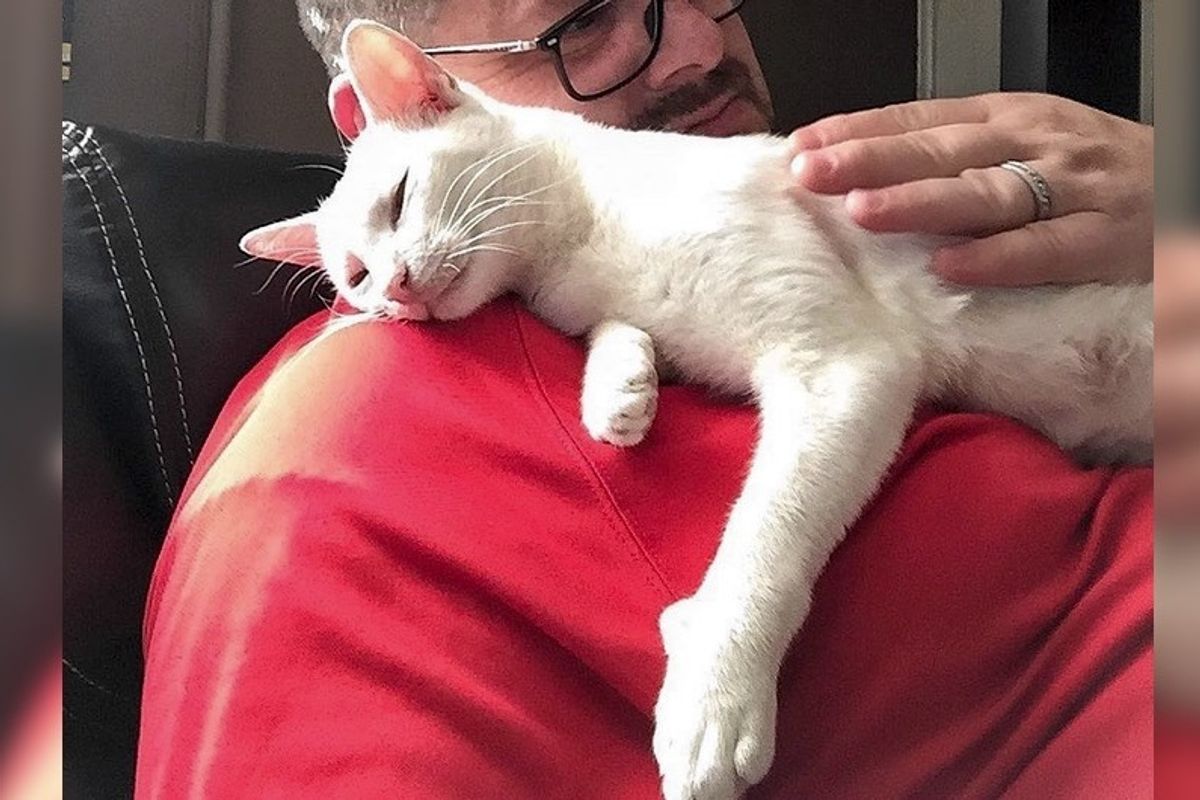 A cat was found with a can stuck on her head behind a (satellite) auto dealership in Eastern Oklahoma.

She was confused and meowing for help. A sales person from the dealership freed her from the can but the kitty quickly wandered off. 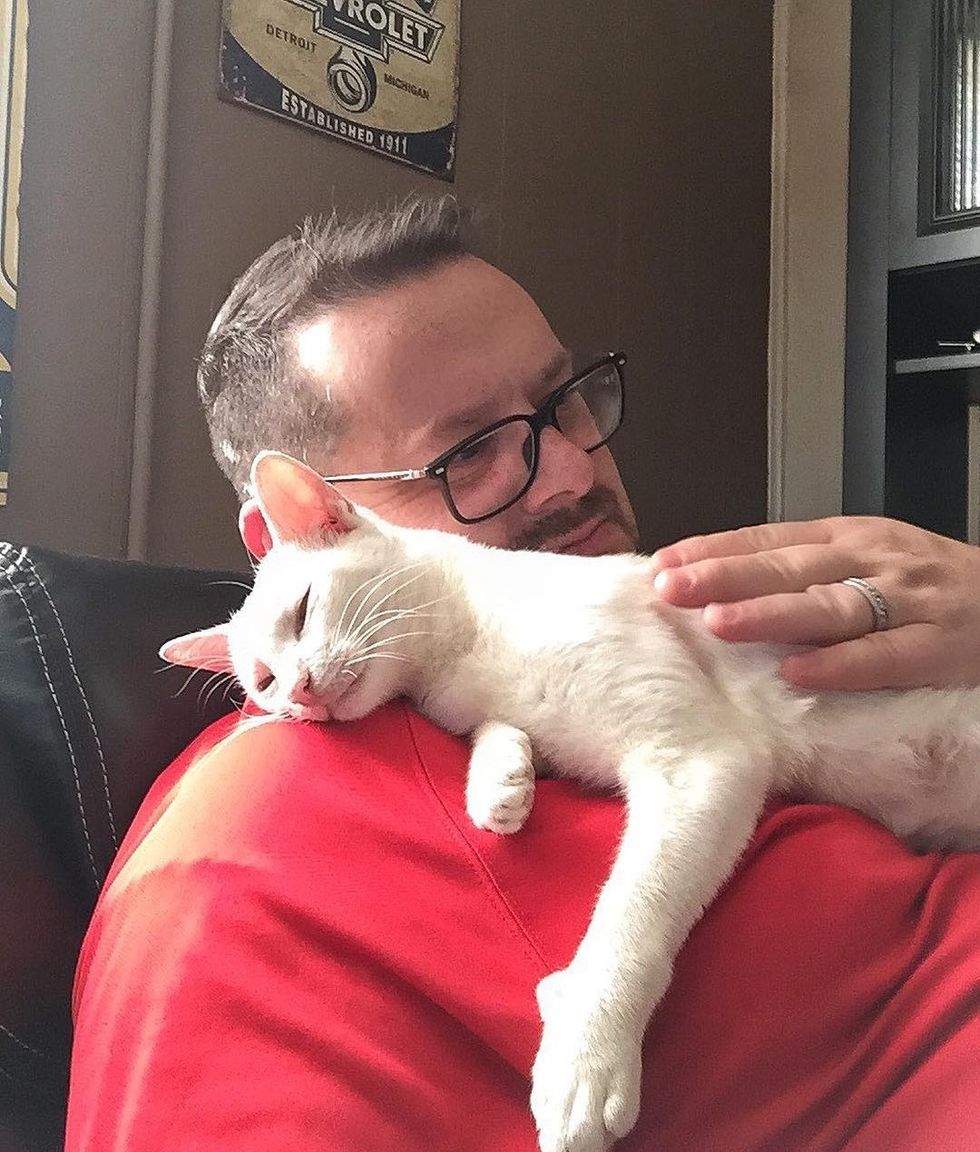 Brian Sheppard, who operates the dealership, learned about the kitty's plight from the salesman and went to look for her. "I left my office but couldn't locate her. Around closing time, I saw her behind my store," Brian told Love Meow.

As he approached the kitty, he noticed just how scrawny she was. "I went inside and grabbed the chicken that I had not eaten at lunch. I pulled it apart for her and fed her by hand."

The cat was so hungry that she scarfed down all the food. Brian assumed that she might belong to someone nearby. Two days later, she came back.

"I went to a local store and grabbed some food, dishes, cat litter, and a bed. When I returned, she greeted me at the door, and I fed her. While she was eating, I noticed she had been nursing babies." 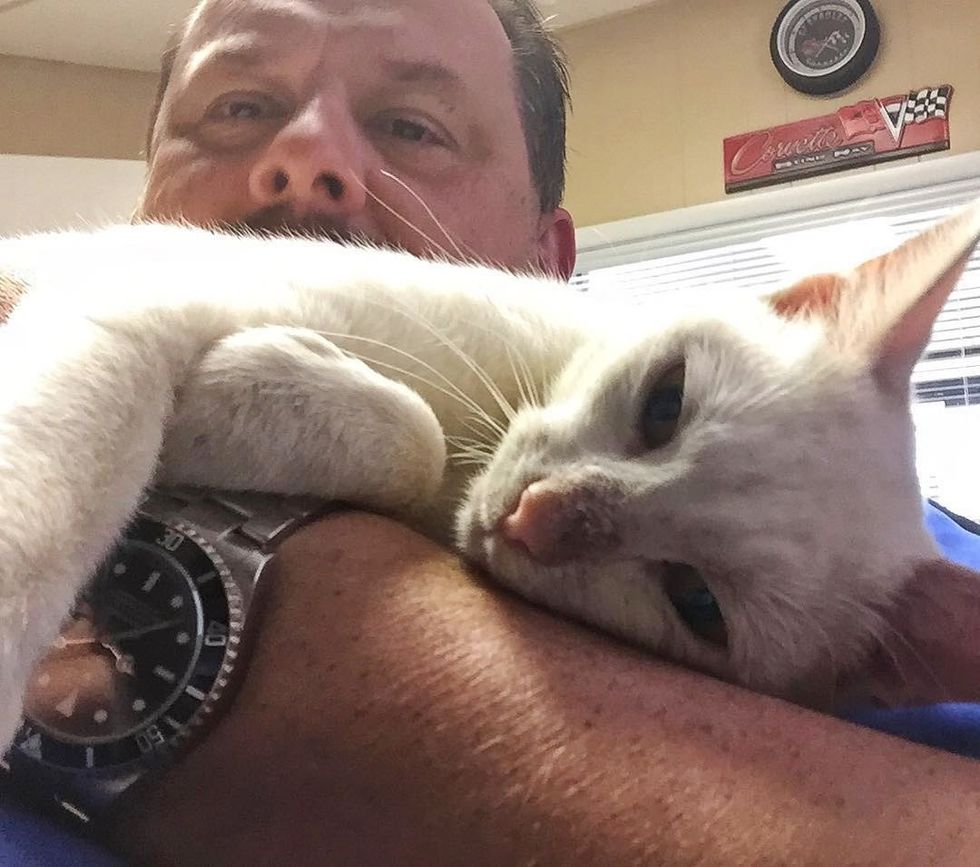 As an animal lover, he knew that he couldn't keep her inside as she had babies somewhere waiting. "After she finished her meal, I placed her food and water dish behind my store, and fashioned a bed out of a box with some shop towels, hoping I would see her again or she would bring me her kittens."

Brian named her Sophie, and the kitty started jumping in his lap for cuddles. 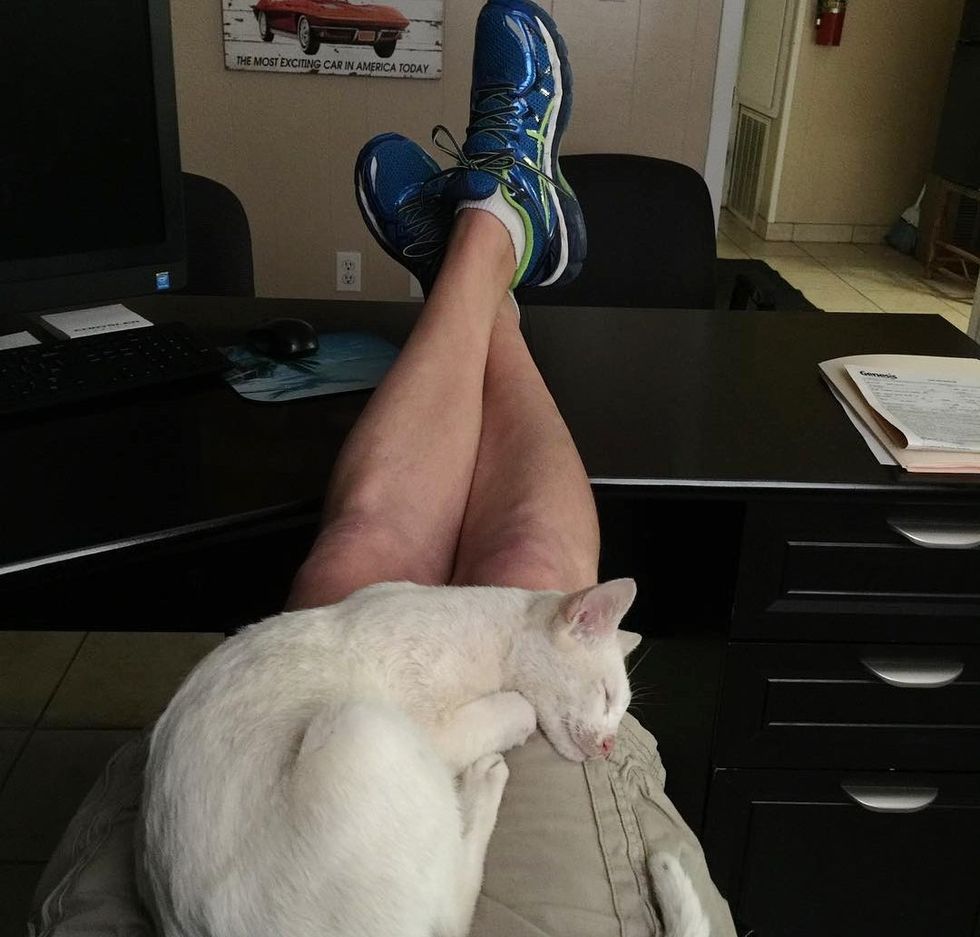 A week later, Brian saw Sophie at a house across a dirt driveway from his store and found out where she lived.

The cat continued her daily visit to the store and spent time with her human friend. "She came into my office, found her food and water and ate. She found the bed I purchased for her and slept in it," Brian told Love Meow.

"She slept there when I had customers. I put her bed under my desk, and she stayed there close to me when I was busy." 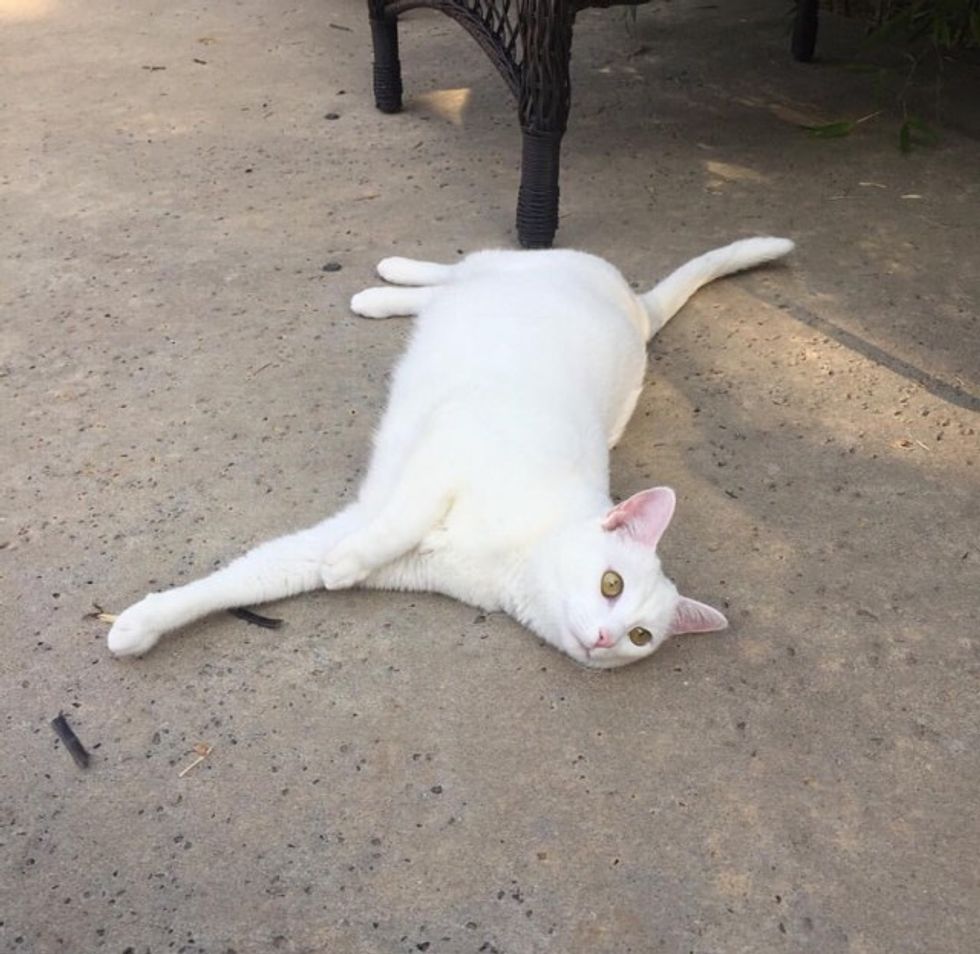 Around late November, Brian went to the house across the dirt driveway and asked about Sophie. That's when he saw her two kittens.

When he offered to adopt them, the home owner wanted him to take all of them as he wasn't interested in keeping and caring for them, but his young daughter was not happy. Brian decided to wait until they were ready. 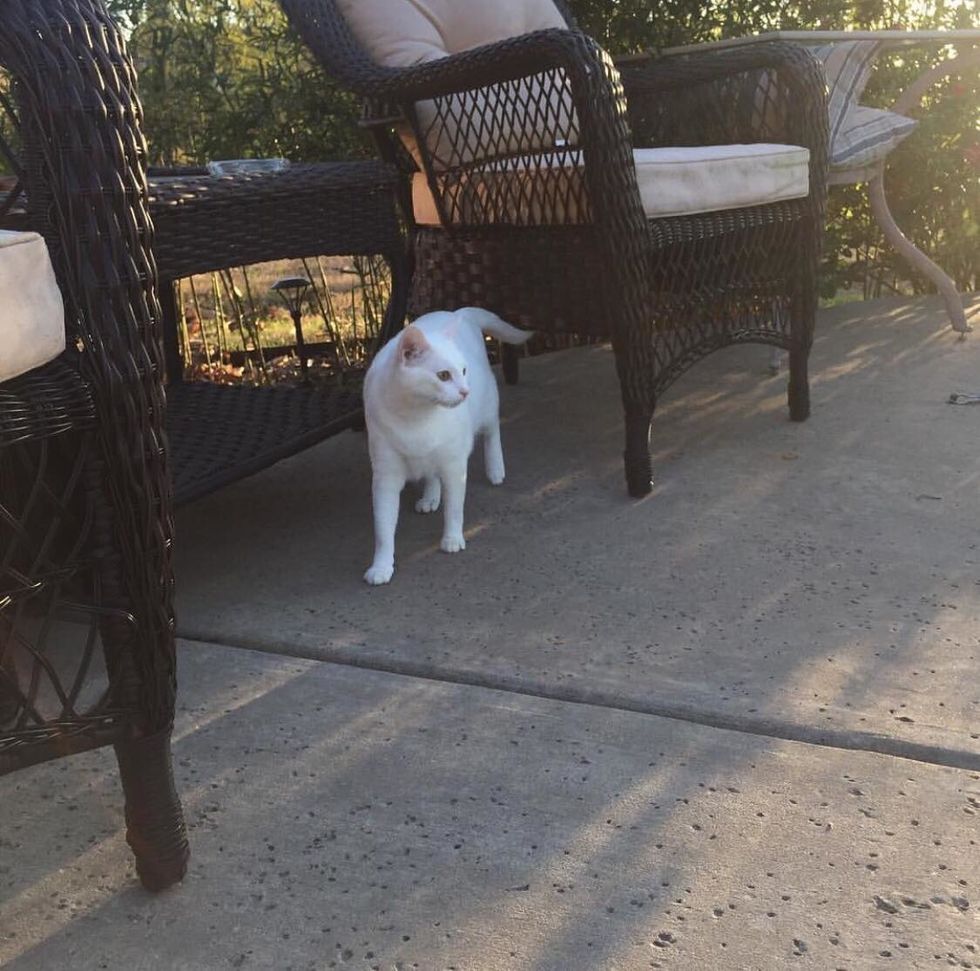 "I didn't hear from the man, nor did I see Sophie for about a week." He thought the family had decided to keep the kitties inside.

While Brian was closing the store one evening, he saw a familiar cat sitting on their welcome mat at the front door. "I was getting ready to lock up my store, and Sophie was by my vehicle, with two kittens. She had brought them to her food source," Brian told Love Meow. 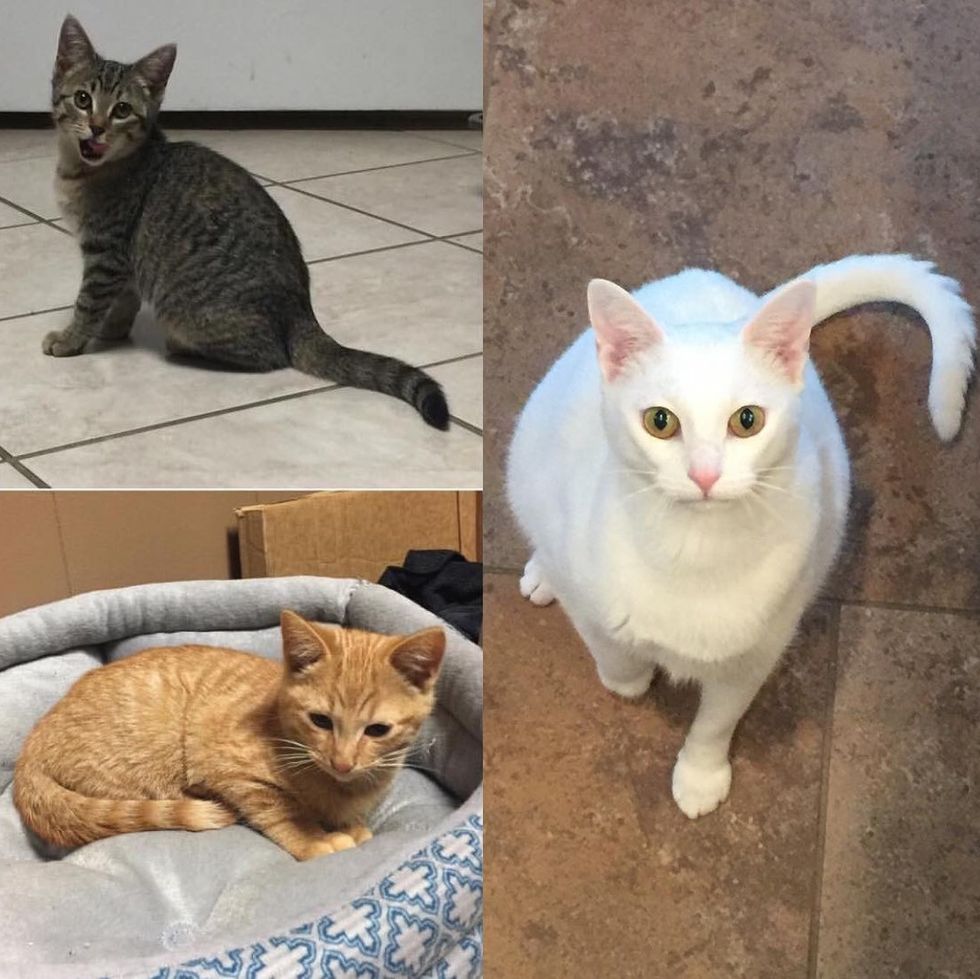 He unlocked and opened the front door to his store, and Sophie came running in. She went straight to his office and started eating. "I sat on the steps, calling the kittens. They both approached me after a few minutes. They were not as skittish but quite playful. I brought them inside, and finally I had them."

Brian updated the family (that had Sophie and the kittens) after taking them in. 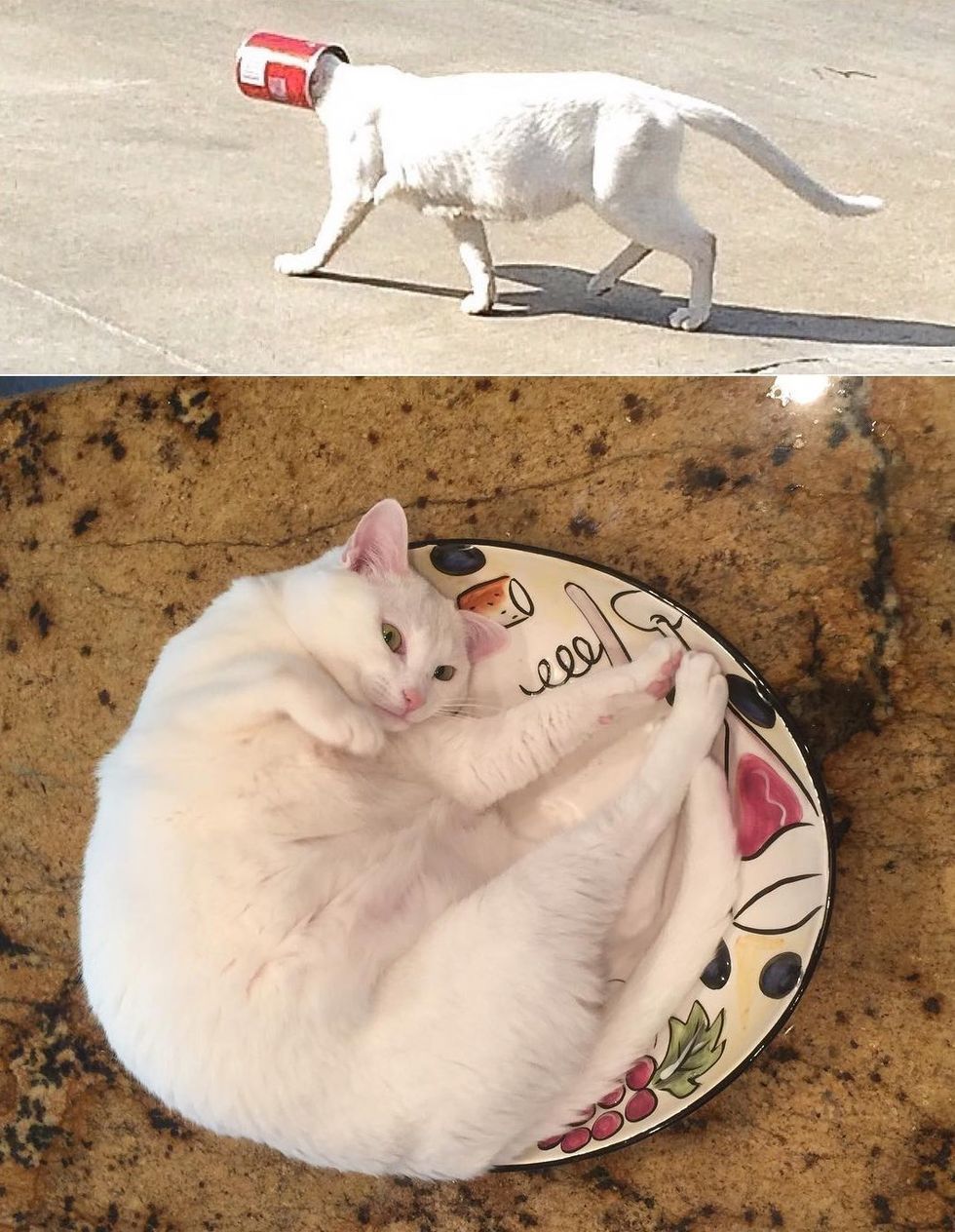 Sophie then and nowSupplied by Brian Sheppard

The two kittens found a home together with one of the employees, and Brian offered to cover their spay/neuter surgery and their first round of vet visits.

It was around Christmas, and Sophie still needed a permanent home. 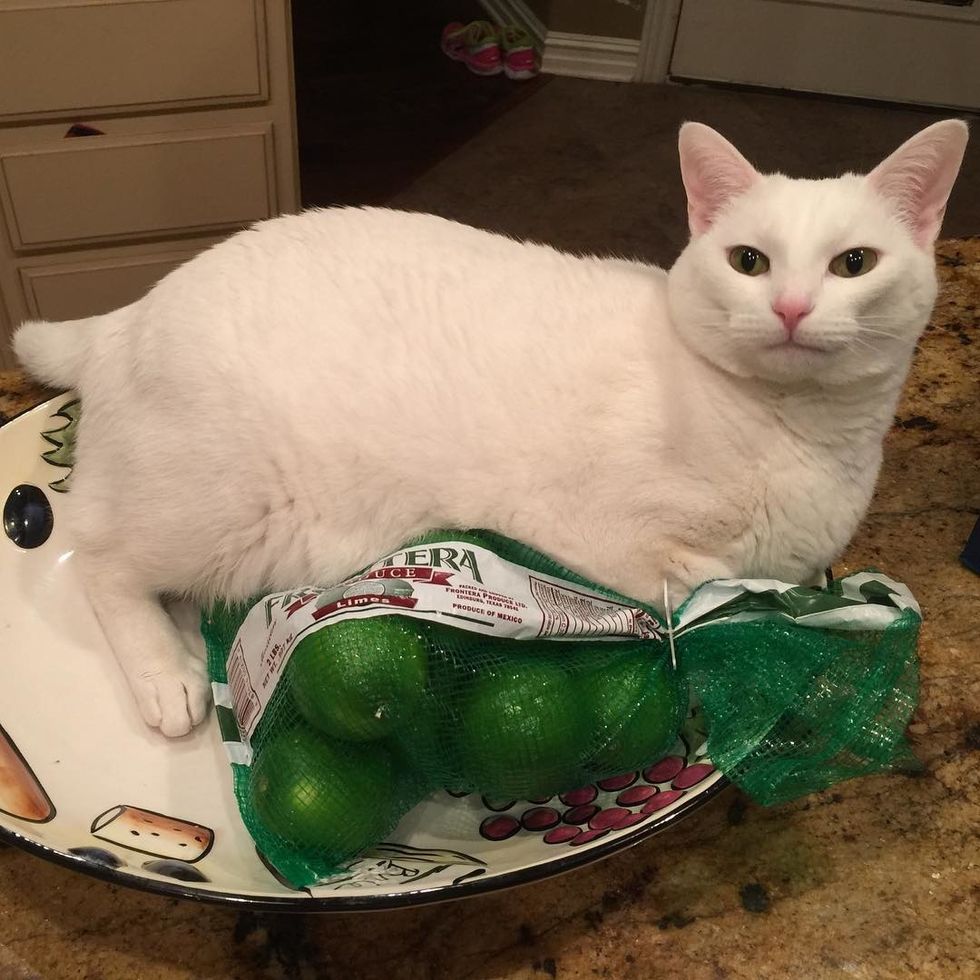 "I talked to my wife who has terrible allergies, and told her I was quite attached to Sophie. My wife said, 'We can try her here at home.'

"It hasn't been easy with my wife's allergies, but it's better now. Sophie is a part of our family." 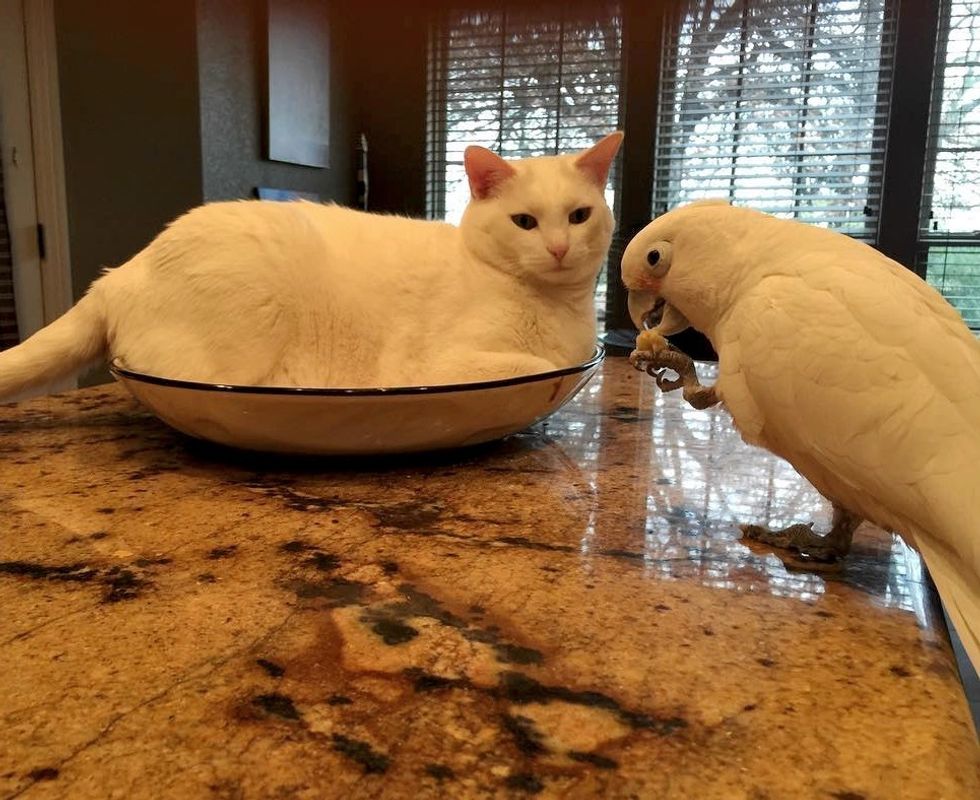 "She follows me everywhere, even to the bathroom." 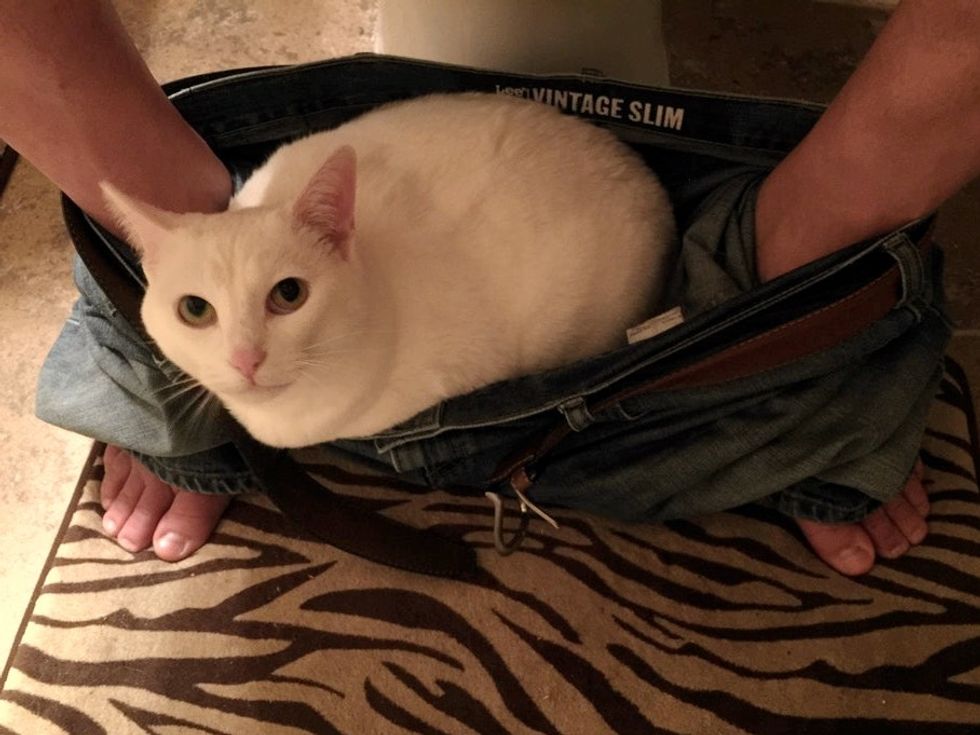