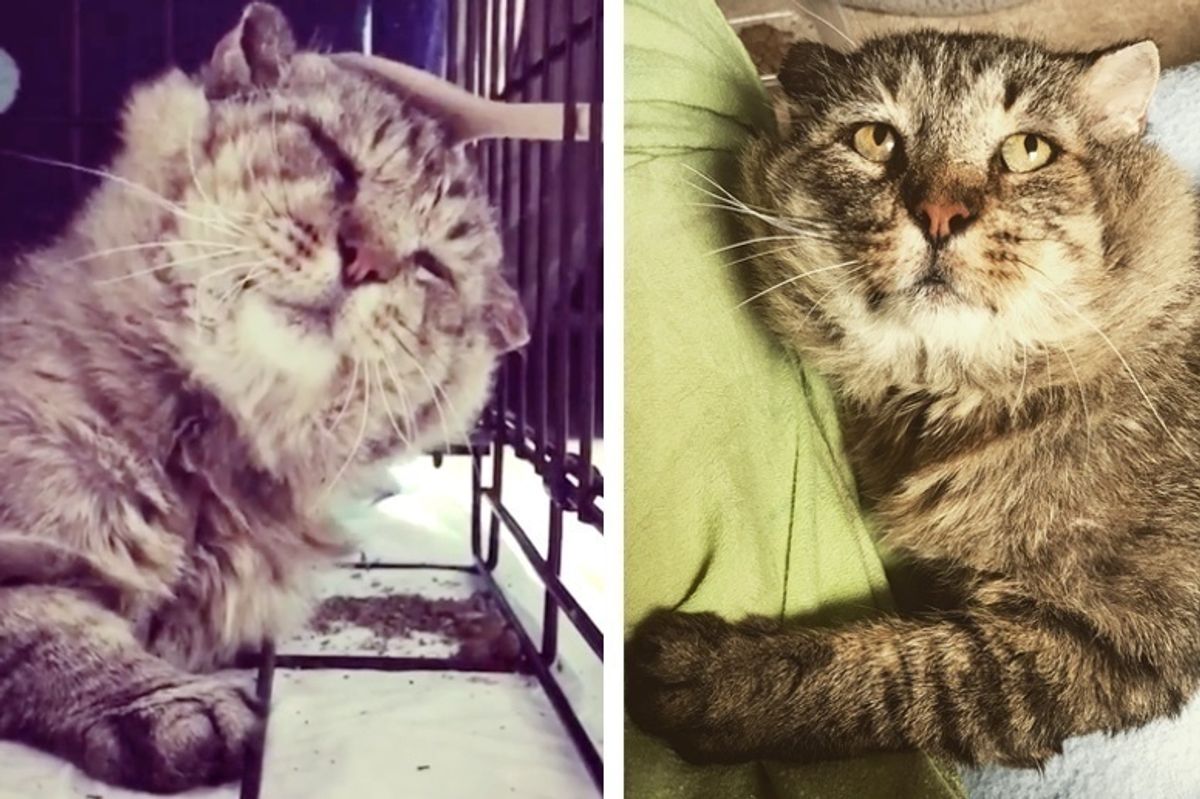 A tabby cat who had spent most of his life living on the streets, found love and trust after a woman saved him from the brink.

Lindsay, a rescuer and foster, came across this scraggly tomcat a little over a year ago.

"He was part of an outdoor colony that I was working on TNRing (Trap-neuter-return), and he was very trap-savvy and hard to catch," Lindsay told Love Meow.

One day, the tomcat suddenly fell ill and was fading. Lindsay and his colony caretaker knew that they had to rescue him immediately. "When we finally caught him he practically walked into the trap voluntarily, it was almost like he was begging for help."

Lindsay took him to a low-cost spay/neuter clinic to get him neutered and treatment for his severe mange and ear infection. "He tested positive for FIV. At that point, the clinic suggested I put him down, but I could see in his eyes that he still had some life in him."

She named the tabby Mr. Belvedere or Mr. B and took him home to see if she could somehow get him well.

Over the next few weeks, Mr. B continued treatment for his mange and ear infection and received dental extractions. As he recovered, he began to open up.

"Somehow he started to trust me and even let me give him medication and clean his ears. It was like he knew I was helping him, it was so magical," Lindsay added.

Lindsay began to socialize him with a wooden spoon so he would get used to being touched. "I had been touching him lightly with the wooden spoon on his paw. He seemed to like it, so then I went after his face. He was in such heaven."

"A few weeks turned into a few months, and eventually I brought him indoors to see if I could make him a house cat and he quickly adapted," Lindsay told Love Meow.

"He was still scared of certain things and I could only pet him halfway down his back, but I could see at that point that he wanted to retire off the streets for good."

Mr. B's X-rays showed a rough lived life from cat fights on the streets. Not only was he covered with scars and mites, he also had severe arthritis. "Over the course of several months I had three different vets tell me to put him to sleep, but he kept fighting through it all."

"But It wasn't until three months later when he started sitting in my lap that I knew everything was going to be all right," Lindsay said.

With lots of patience, love and unwavering determination, Lindsay saw a sick, timid tomcat blossom into a snugglebug with loud purrs and so much affection.

"He's very loving, affectionate, social, playful and just overall so appreciative of indoor life. He loves retirement," Lindsay told Love Meow. "They estimate that he is 10-12 years old so he lived lots of years on the streets."

Four months after his rescue, Mr. B was ready for his forever home. "He was a special-needs kitty so I needed a special home for him," Lindsay said.

Jenna De Cristofaro, a vet tech from North Carolina, came across Mr. B one day, and she fell in love.

Jenna and her husband have always been passionate about rescuing older cats in need. "I saw him on my explore page on Instagram and he had me at the wooden spoon," Jenna said.

Lindsay was so thrilled to have found the perfect family for Mr. B that she flew him from Florida to his forever home in North Carolina.

When Mr. B arrived, they saw a sweet boy with battle scars all over his body. But he showed no fear in his eyes and only trust and contentment. Mr. B quickly settled in and let his humans brush him and pet him.

"He loves to play! He can entertain himself with toys for hours. The best part about it is that he's never seen toys before so everything is so new and exciting for him," Jenna told Love Meow.

"He has certain chirps and trills when he is happy - different sounds for each emotion! You can see his soul through his eyes."

"Last year, Mr. Belvedere was saved from the streets. He accepted his fate just like any wild animal would do. He had no idea what was truly in store for him and that his life was actually just beginning," Jenna said.

"In just two months after being 'feral', this guy was chirping away sounds of joy, happiness, health, and love for a human being. His fight for life was truly amazing to see."

"Mr. B is the most unique animal I have ever met, and he has changed my life forever. He shows love, trust, strength, resilience, and so much more," Jenna added.

"We can't imagine life without him."

Watch Mr. B's journey to his forever home in this video:

Related story: Cat with Squeaky Meow Finds His Purr-fect Match After Living on the Streets Most His Life