No one knows his exact age or where he came from, this semi-feral cat was given a second chance at a better life after a kind-hearted man rescued him from the verge of decline. 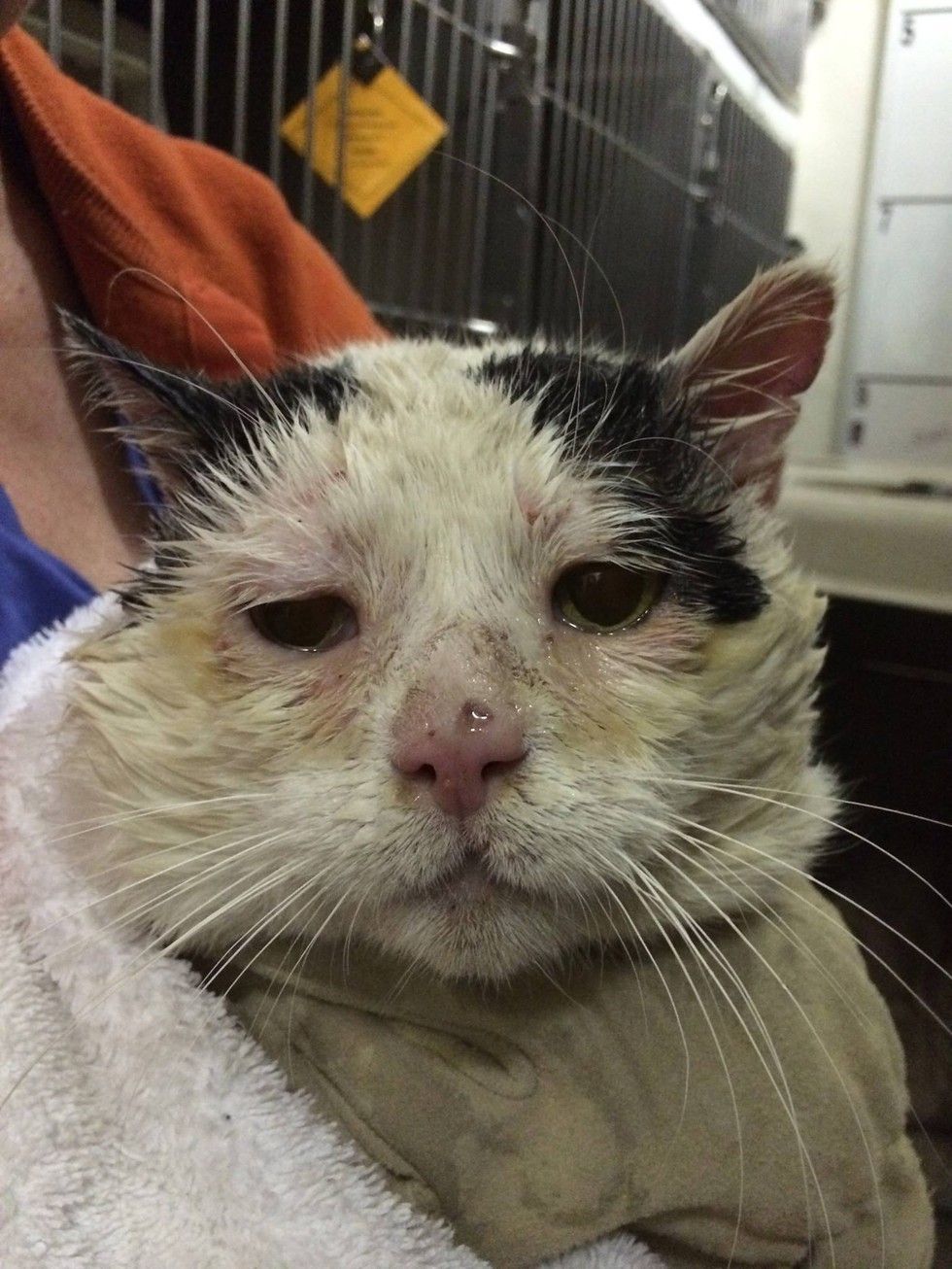 A good man had been feeding this cat in his yard for about three months. Tuffy would come out of the bushes at the back of his home for food, but when he began to look very haggard, the man knew he had to help.

"Tuffy wouldn't allow himself to be caught but the man was able to lure him into a carrier and got in touch with VOKRA (Vancouver Orphan Kitten Rescue Association)," VOKRA wrote on Facebook.

His eyes were infected and his sinuses were stuffed up. Despite being a little defensive, Tuffy learned that the volunteers at the shelter were trying to help. "He let us clean his eyes and ears, give him medicine and apply antibiotic eye cream."

After spending so much time fending for himself outdoors, he was finally in good hands and was on the mend. 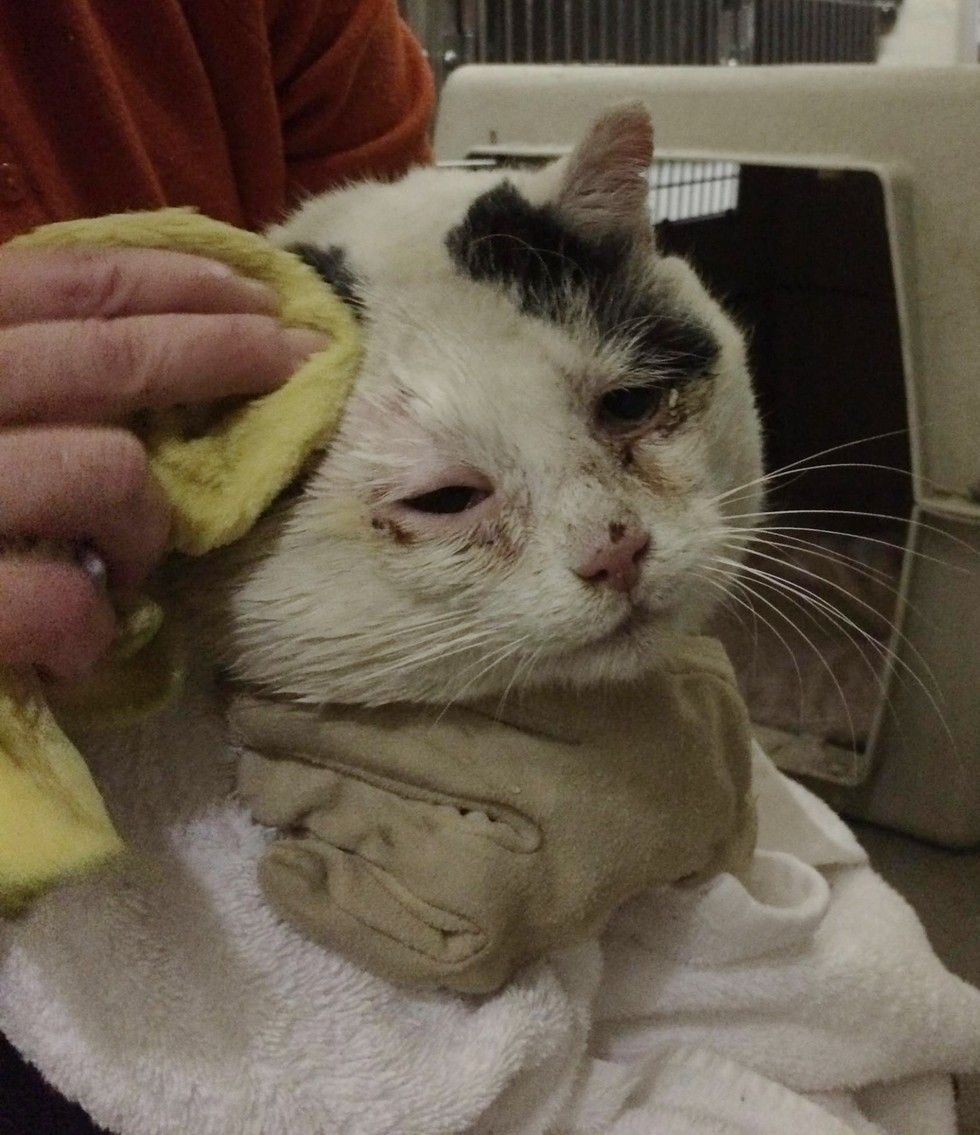 A week after the rescue, Tuffy felt stronger.

Volunteers washed his face with a warm wet compress every day, and it made him feel better. While his face was being cleaned, he allowed his human friends to pet his back.

They cared for him around the clock, applying eye cream and giving him oral antibiotic to help him fight his cold. With a lot of love and patience, the kitty was healthy enough to be neutered and receive the dental care that he desperately needed. 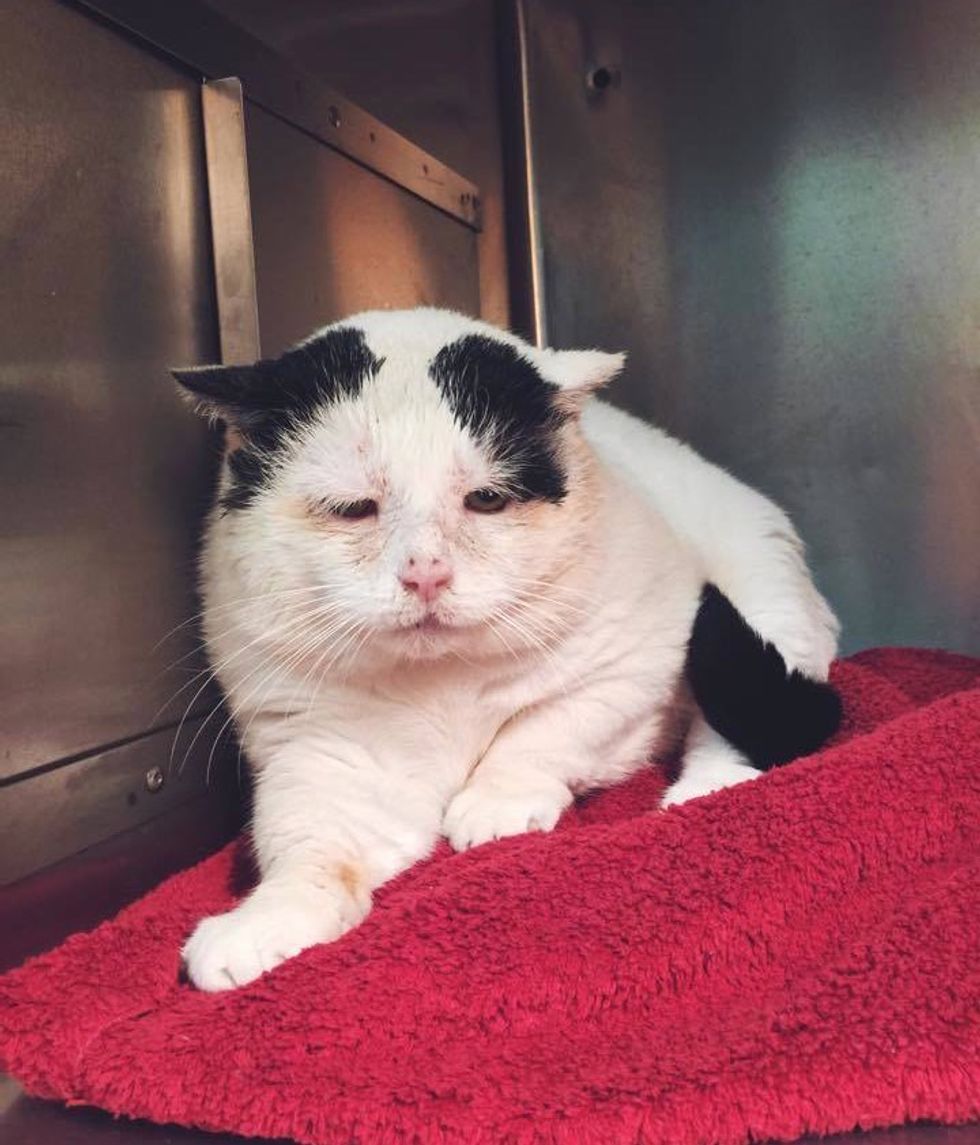 "As he came to us covered in fleas with his fur completely matted, we shaved the matts off his back which probably made him feel much more comfortable," VOKRA said.

Tuffy was left with a lot of previous flea dirt on his skin. Bathing was out of the question, so the volunteers washed his body with a warm, wet facecloth instead.

Several caretakers of a feral colony recognized Tuffy from his photo at VOKRA. "Tuffy had been coming to their colony to feed for about eight or nine years. He would always sit by the bushes and wait until the ferals ate, then he would approach and finish off the food. These caretakers hadn't seen Tuffy for about a year though. The location he was rescued at is about two blocks away and across a ravine from their colony! That is where he met the nice man who has been feeding him and called us for help." 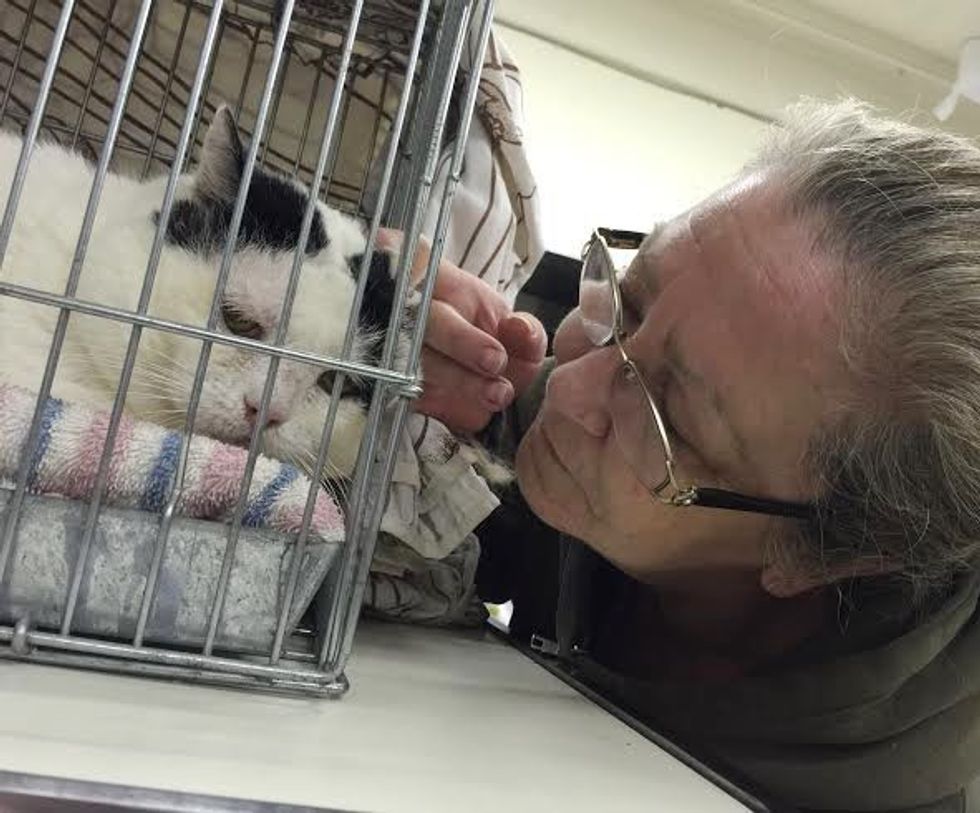 They estimated his age to be about 12 years old when he was rescued.

When it came to finding a home for Tuffy, it wasn't an easy task. Tuffy was eventually tested FIV+, and he was still too feral to live in a home as a solo cat. Then they found a perfect solution for him.

Katie's Place Rescue Shelter took him into their indoor/outdoor enclosure with other cats who are also FIV+. "The likelihood of fighting is greatly reduced now that he is neutered," VOKRA said. 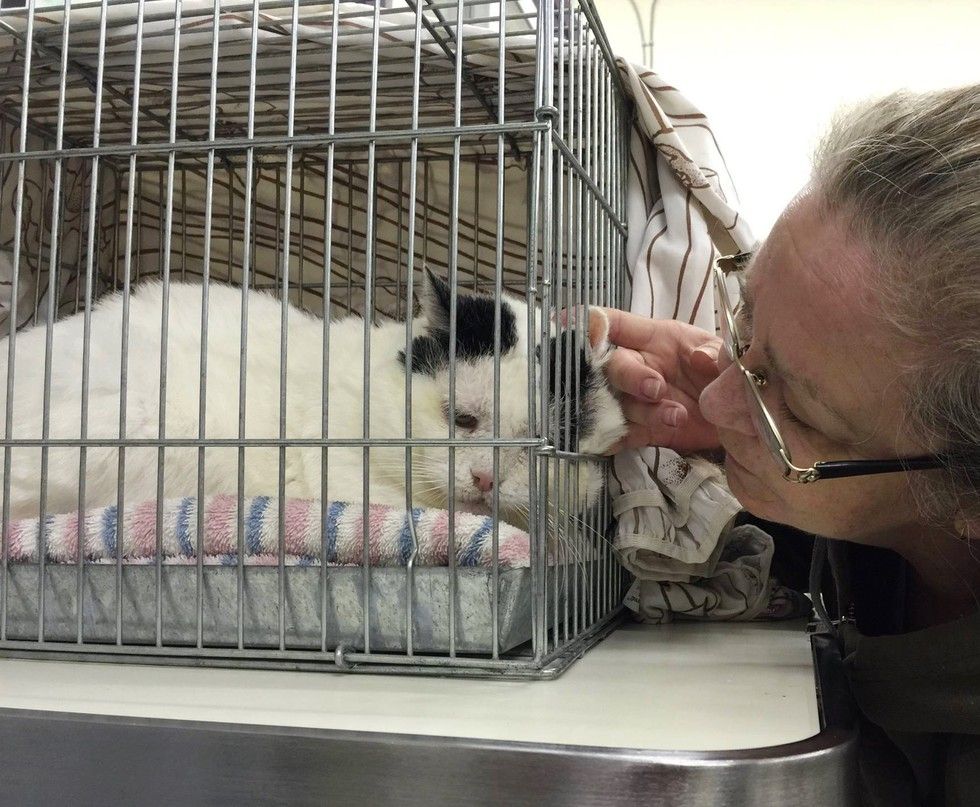 Saying goodbye to the volunteers at VOKRA before going to his forever home.Courtesy: VOKRA - Vancouver Orphan Kitten Rescue Association

As Tuffy recovered, it became clear that he prefers to keep his distance. "We do not want his life to be full of fear and have made the decision to move him to our monitored Safe Feral Area where he will have a heated cabin and a large, beautiful forested area enclosed by buried fencing," Katie Place Rescue Shelter wrote.

Now he has feline buddies to live with and won't have to fight for food or go without care ever again. 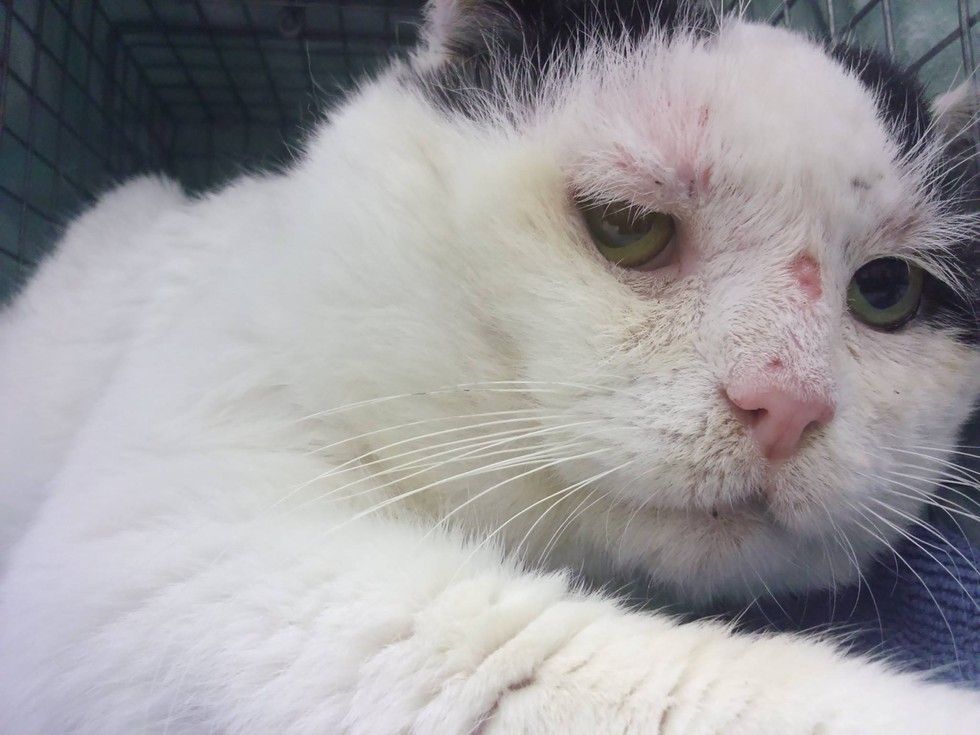