A litter of kittens were found without a mom. A tabby cat took them in and started showering them with love. 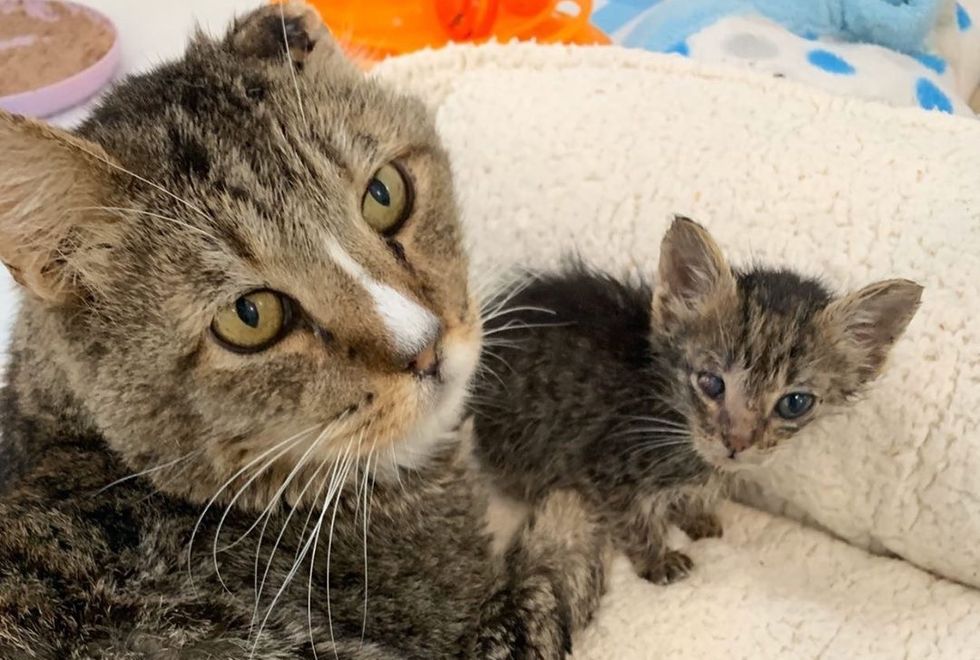 Volunteers of Alley Cat Rescue were working on a TNR (trap-neuter-return) project in Los Angeles, when they found a stray kitten at an apartment complex.

She had an ulcerated eye and had trouble seeing. "She was so tiny and could not even find food," Alley Cat Rescue told Love Meow.

As it turned out, the little tabby was not alone. Rescuers later found another four kittens in the bushes by the parking lot. The kittens were dirty, covered in fleas and needed medical attention. 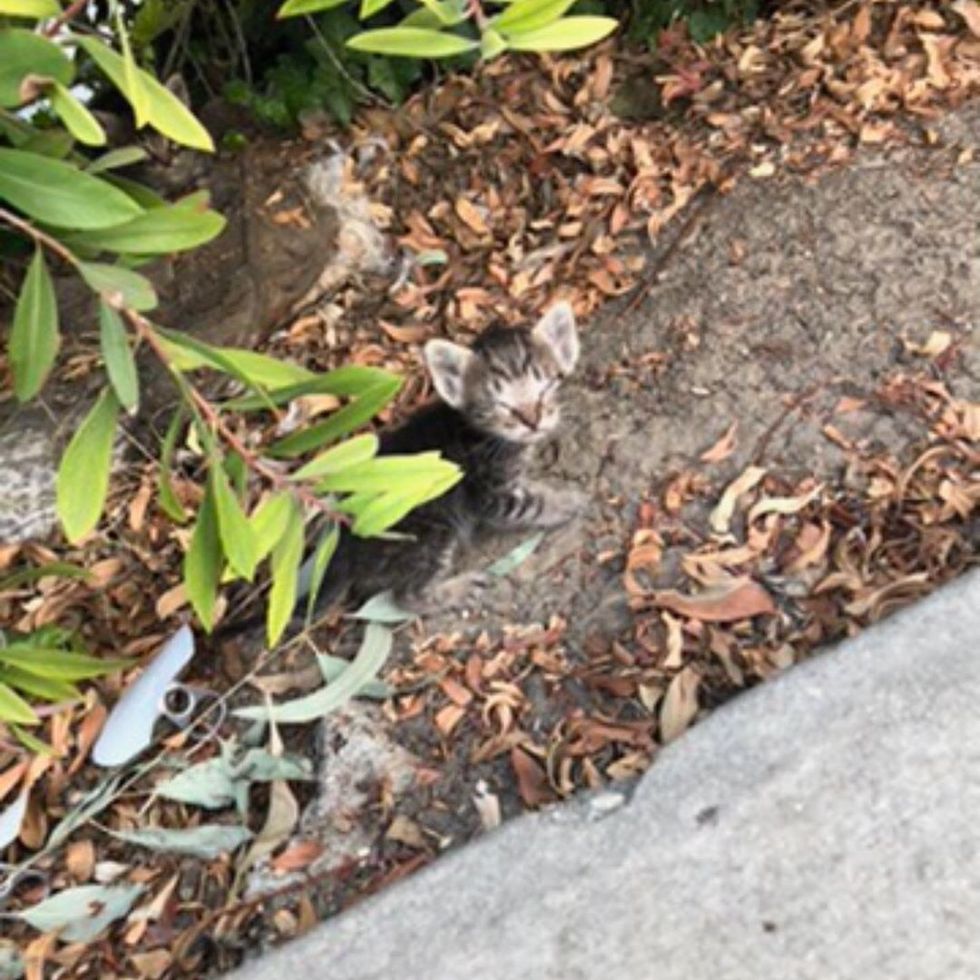 Knowing the kittens wouldn't be able to survive living in the parking lot, Alley Cat took them in, got them all cleaned up, treated for fleas and started them on proper medication.

"They are all on antibiotics for an upper respiratory infection, and parasite meds. Our vet said the tiny baby girl's eye will need to be removed when she is bigger."

After the ordeal, the kittens settled into their foster home and could finally rest comfortably in their cozy, warm bed. 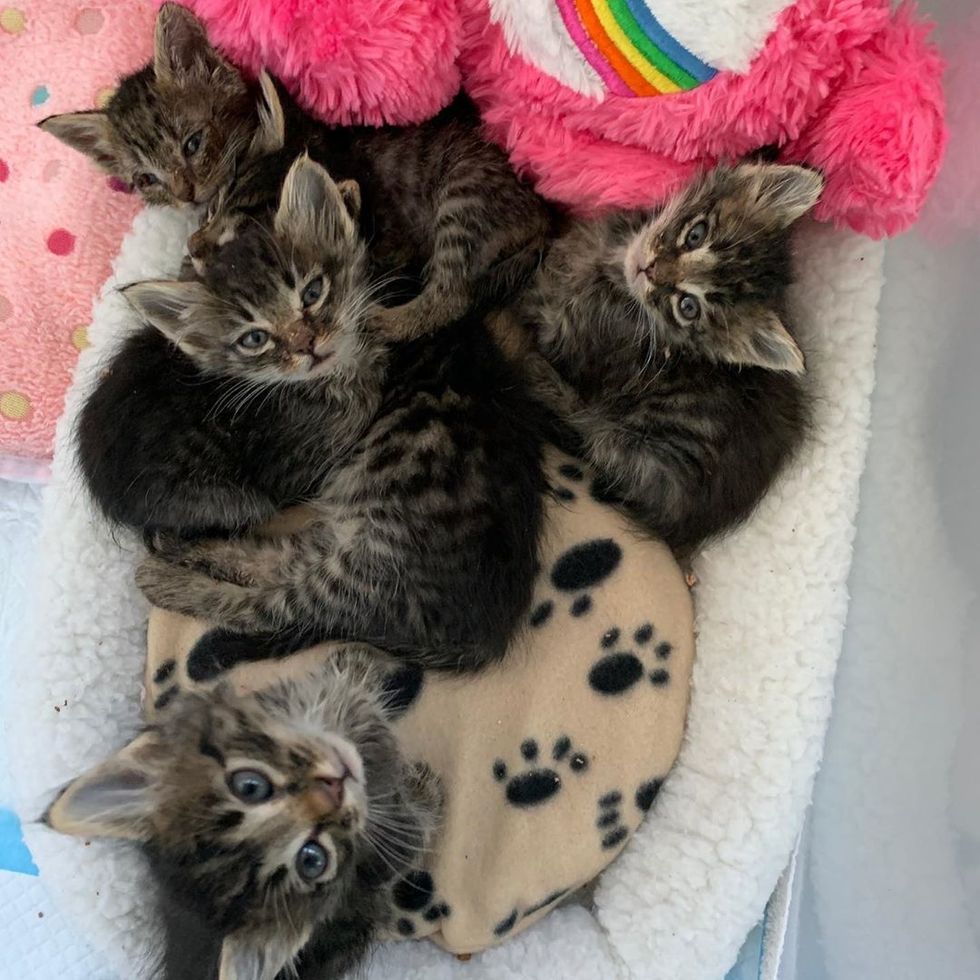 When the kittens were doing better, they decided to introduce them to an older foster cat named Harrow, who has a soft spot for kittens in need.

Harrow was rescued from the streets, in poor condition. He began to blossom when he was placed with other foster kittens. Alley Cat Rescue has since been pairing him with orphaned kitties who are in need of cuddles and comfort. 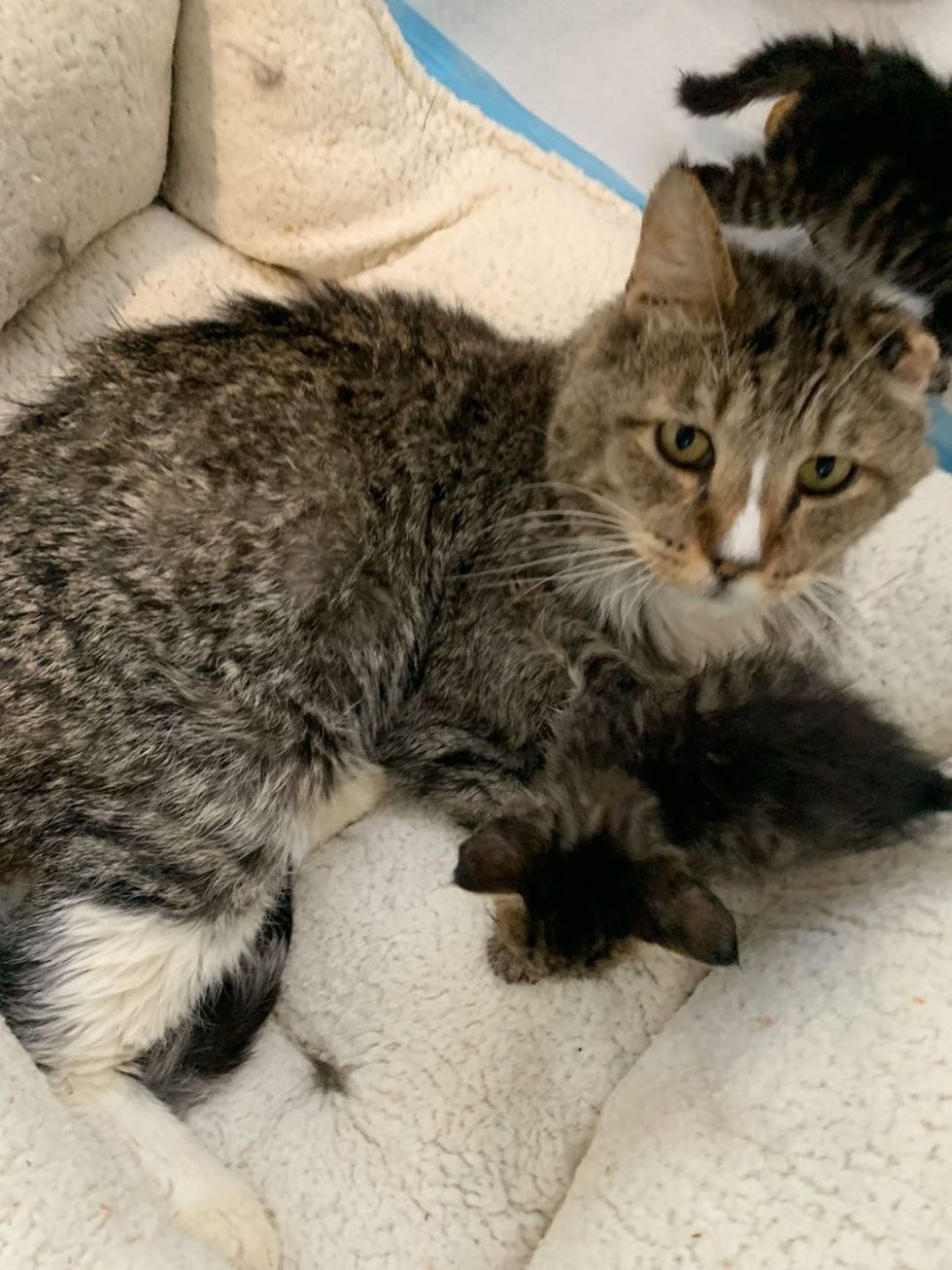 Harrow took the new litter under his wing and started grooming and cuddling with them.

The kittens immediately lined up on his side and started nursing, even though Harrow is not equipped with a milk bar. He didn't mind at all. 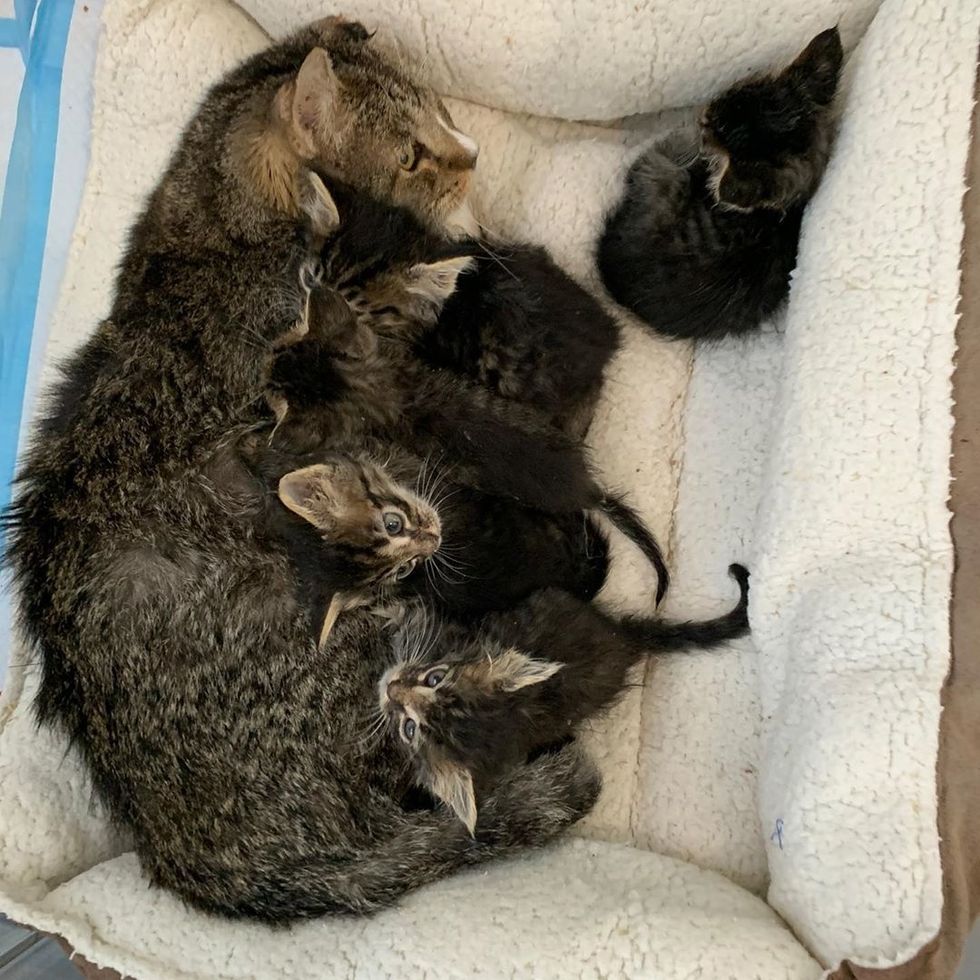 "It's the first time he has groomed the new kittens," Alley Cat told Love Meow. "It has already made a huge difference for the smallest of this group."

The runt of the litter clings to Harrow and won't leave his side. 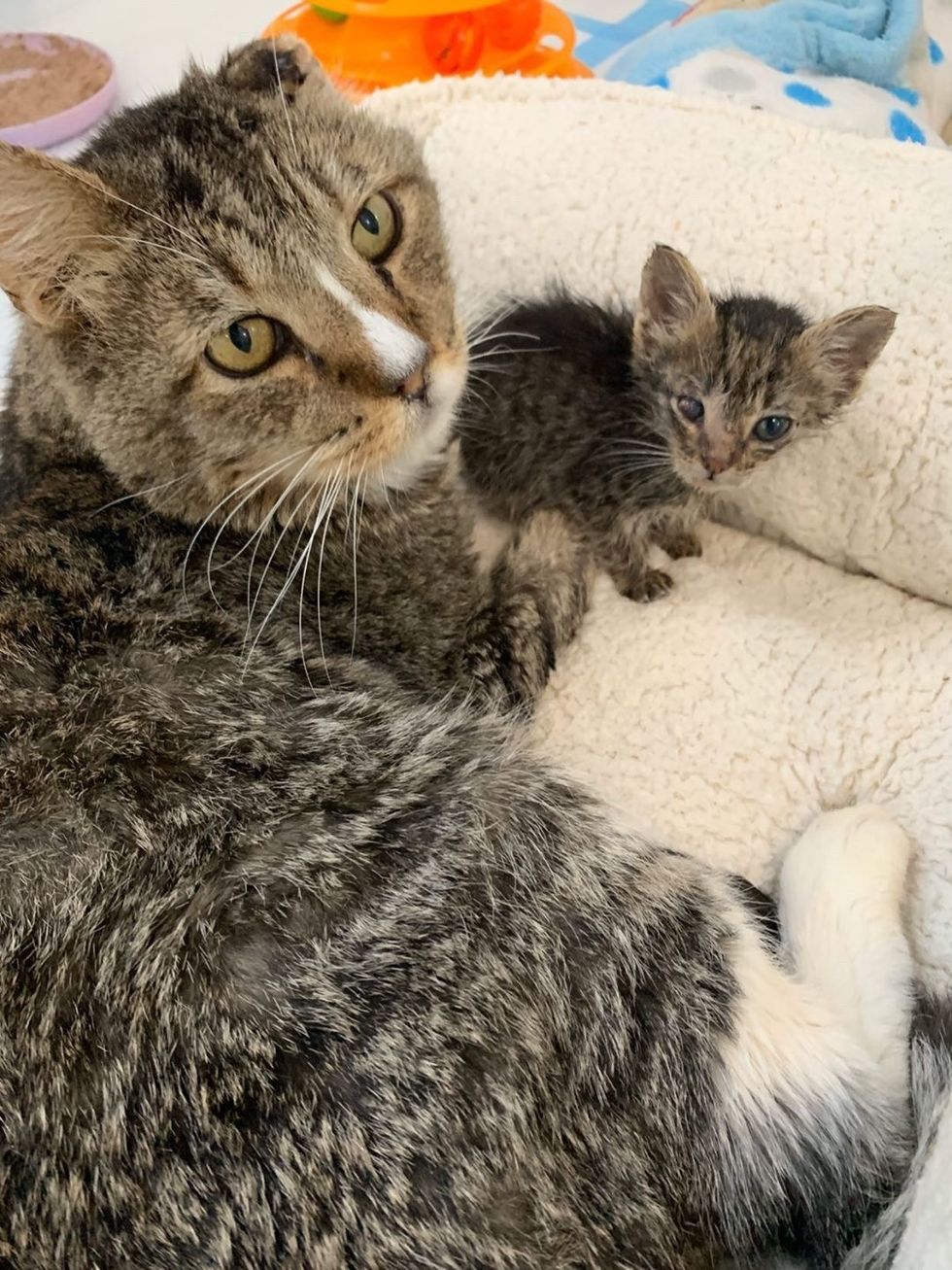 The little tabbies like to pile up on Papa Harrow, kneading and purring in pure bliss.

Watch the kitties in this cute video:

While other kittens are playing and running in their nursery pen, the smallest kitten gets extra cuddles from Harrow, soaking up the love. 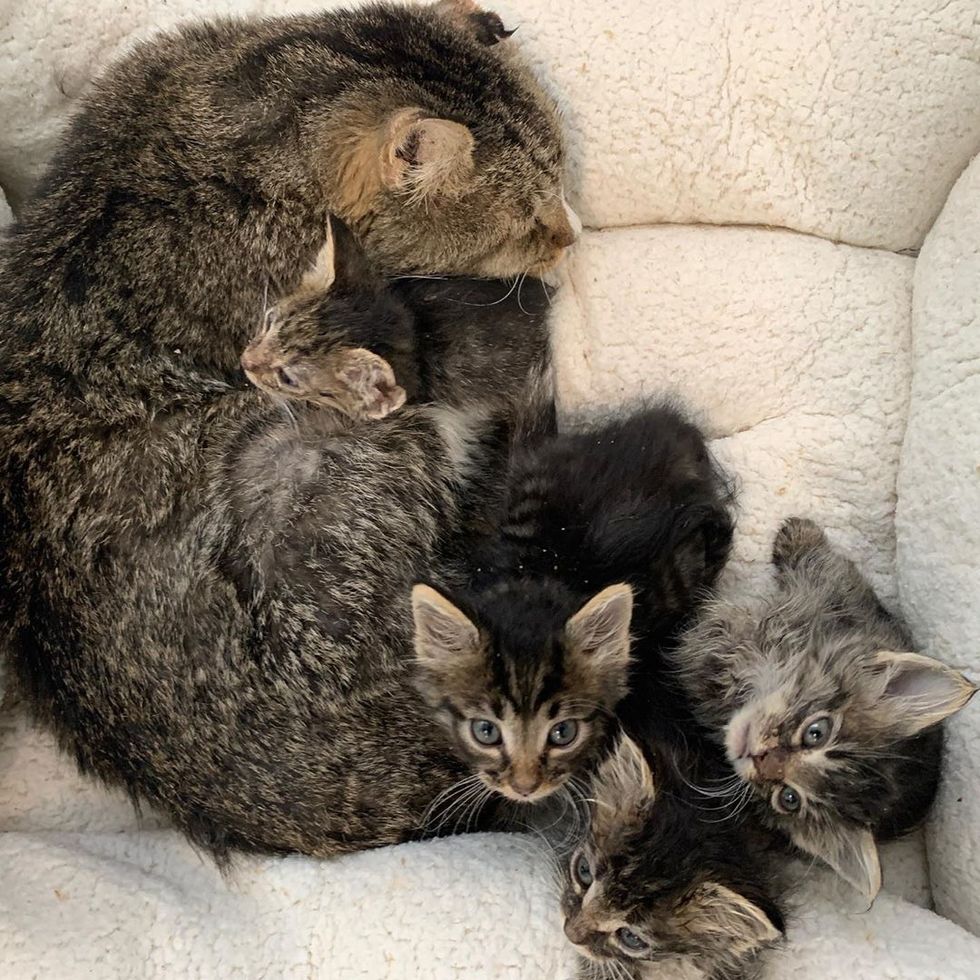 With Harrow's help, the kittens are thriving in foster care.

They are so happy to have someone to lean on when they need a cuddle. 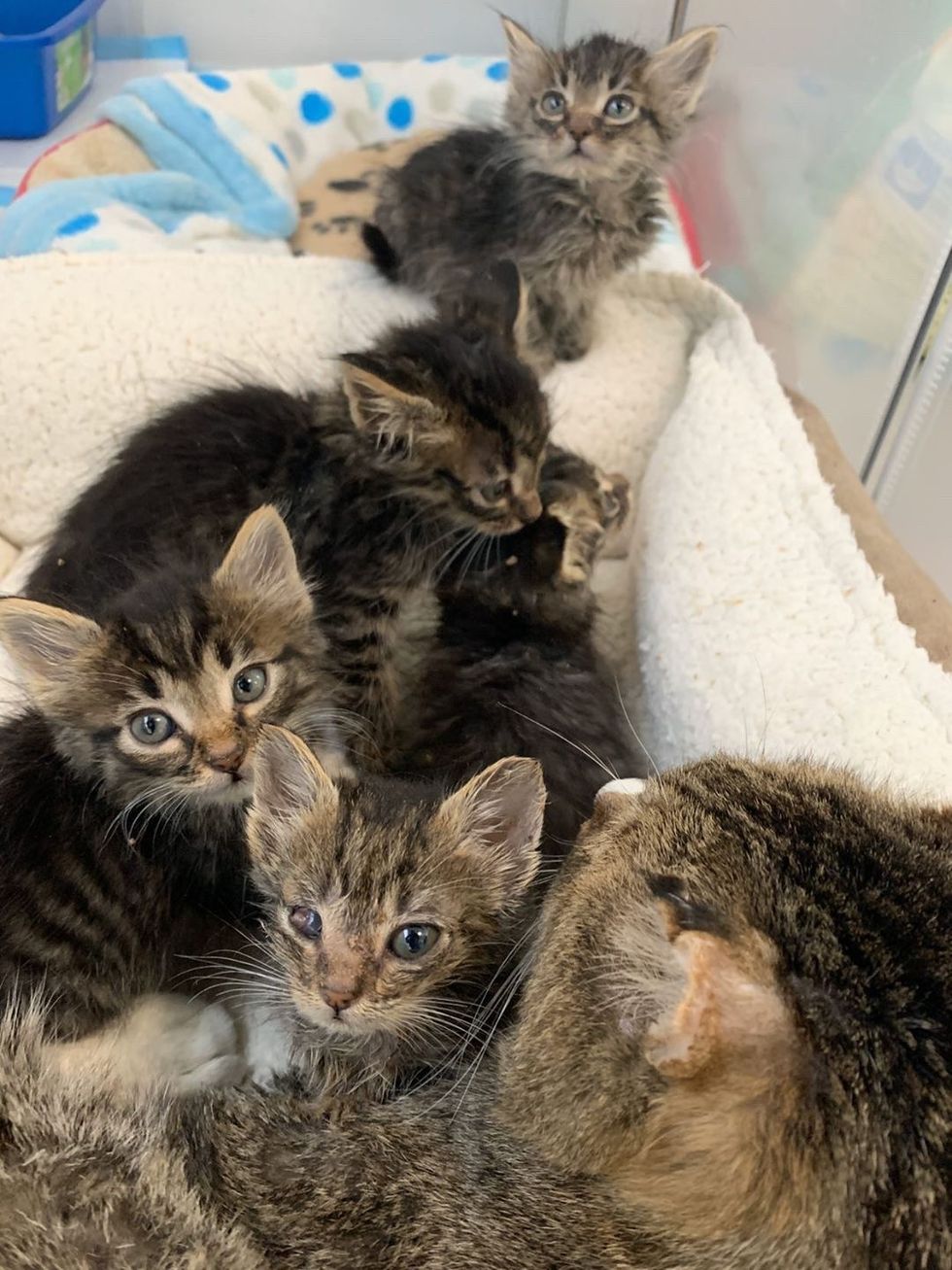 After a rough start to life, these lucky kitties will grow up in a safe home with Papa Harrow watching over them every step of the way. 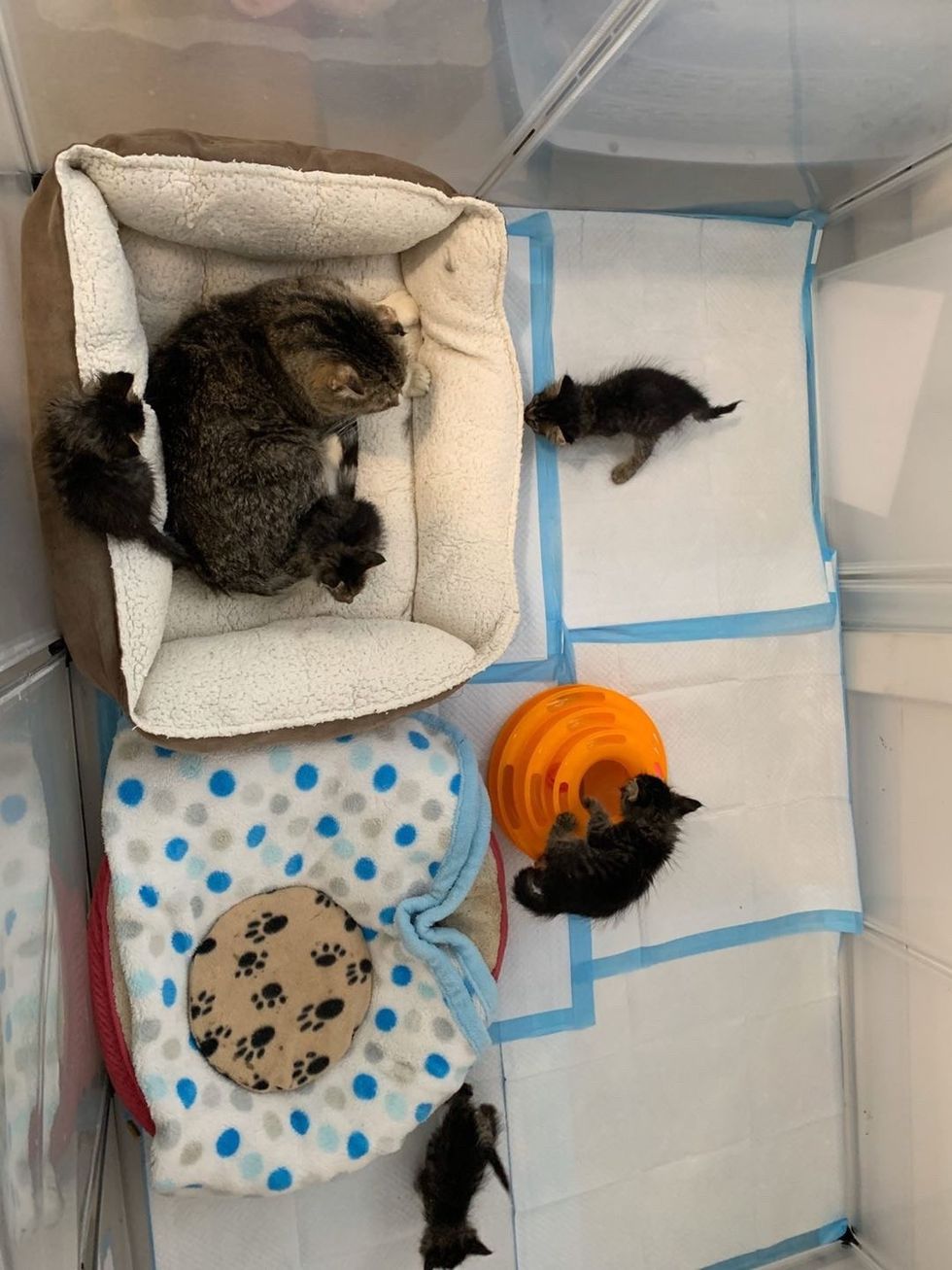 Related story: Cat Who Spent Most of His Life on the Street, Helps Orphaned Kittens In Need