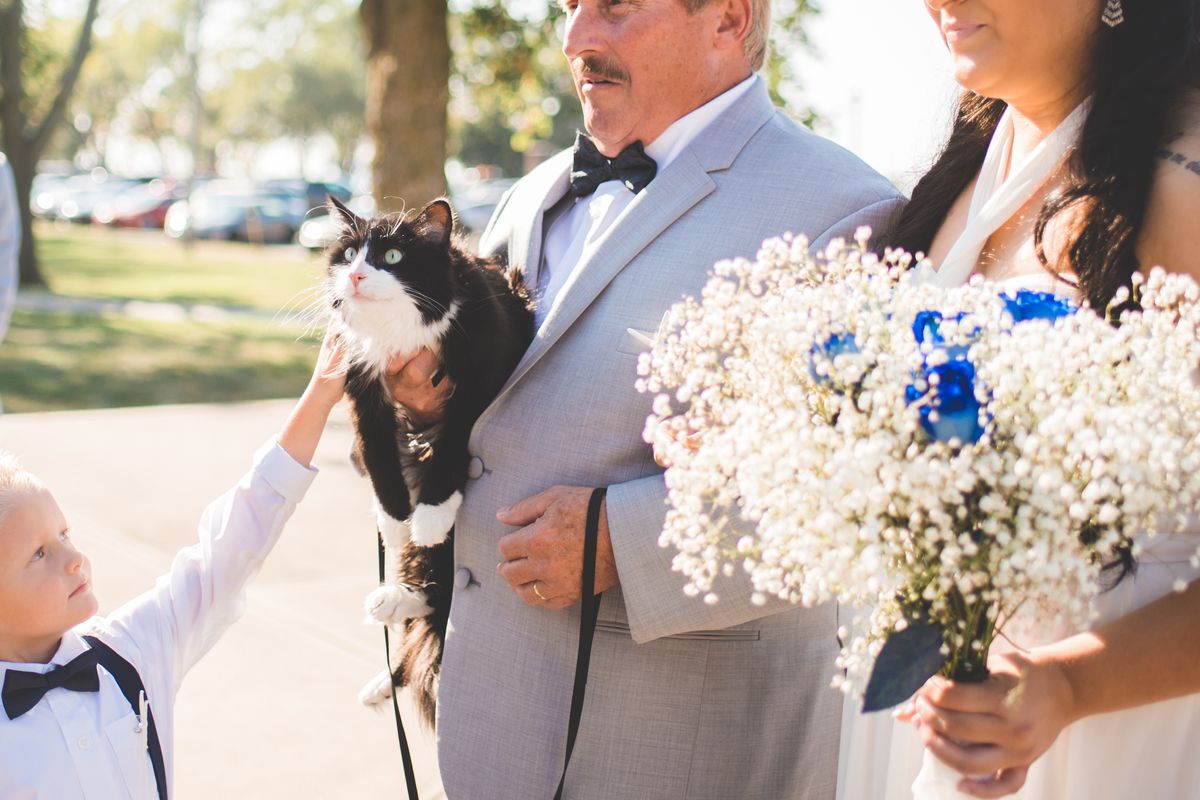 Cat Who Never Leaves His Mom, Walks Her Down the Aisle In These Beautiful Photos

A protective 8-year-old kitty got to walk his cat mom down the aisle on her wedding day. The sweet tuxedo has never left her side since they found each other four years ago.

Courtney Jiménez from Ohio went to Cleveland Animal Protective League four years ago without the intention to adopt. A fluffy tuxedo cat hopped on her lap and immediately claimed her as his human.

"It was complete love at first sight. I went to the shelter to just look and I was going into the last room. When I sat down to pet the cats, Angel jumped on my lap and was so lovable," Courtney told Love Meow.

She knew that she had been chosen, but at the time Courtney wasn't ready to take him home, so she started preparing for his adoption, hoping no one would take him away.

"I went there one week later as soon as they opened to get him and he was there waiting for me. It was so sweet because he was looking out the window, facing the hallway as if he knew I would come back for him."

Since that day, Angel hasn't left Courtney's side.

"He has been the best blessing! We share a very close bond. If he had it his way he'd cuddle 24/7. He was really protective of me when I was pregnant and would not let me out of his sight," Courtney told Love Meow.

"Even when I took a shower he was my bodyguard and had to be by the door."

After the baby, Michael Jr., was born, Angel helped his mama look after him and became his protective brother.

When Courtney and her then fiancé Michael were getting ready for their special day, she knew that she couldn't do it without her cat who had never left her side.

"Angel was my first baby and we wanted him to be a part of our special day some way. And this was the best way to walk his mommy down the aisle," Courtney told Love Meow.

When their photographer Aileen Elizabeth learned about the adorable arrangement, she was very excited.

"Walking the bride down the aisle is a huge honor, and can be a little nerve-wrecking but Angel handled it like a champ," Aileen told Love Meow.

Courtney's father held the sweet tuxedo in his arms while the two were walking the bride together down the aisle. Angel the protective little boy turned to look at his mama as she was beaming with joy.

"He was very calm and composed, and all of Courtney and Michael's guests were loving it," Aileen told Love Meow. "Courtney had the biggest smile on her face."

The 8-year-old boy wore the purrfect tuxedo for his mama's special day.

Related story: This Guy Couldn't Find a Date to School Prom, So He Took His Cat