Heartbroken Kitten Wouldn’t Eat Until She Met This Dog

A tiny rescue kitten missed her mom so much that she wouldn't eat until she met this dog. 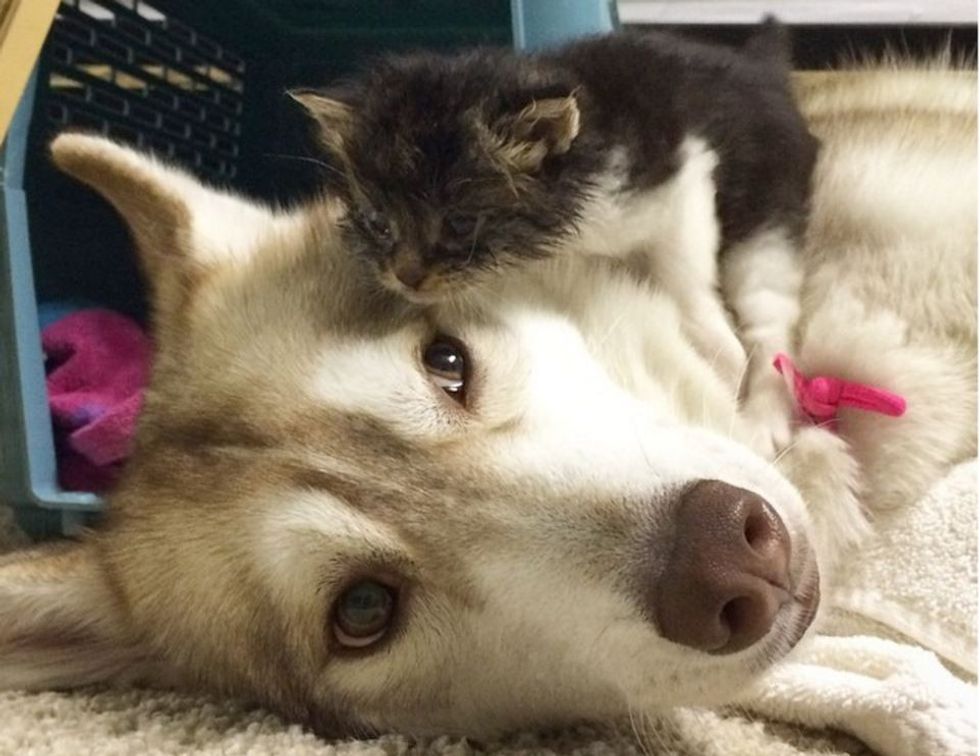 A little 2-week-kitten was found alone on the streets, frail and barely hanging on. Thoa Bui from San Jose, California took her into her care, but saving the kitten seemed to be rather difficult until her Husky Lilo offered to help, and it changed everything.

The kitten, named Rosie, wouldn't eat no matter how hard Bui tried. The tiny fur baby looked as if she was giving up. Then Lilo, one of Bui's Huskies decided she would take the orphaned kitten under her paws.

"Rosie almost did not make it through the first night... Even with round the clock care. She was lethargic and limp. So we decided to go out on a limb and let her cuddle extensively with Lilo," Bui said. 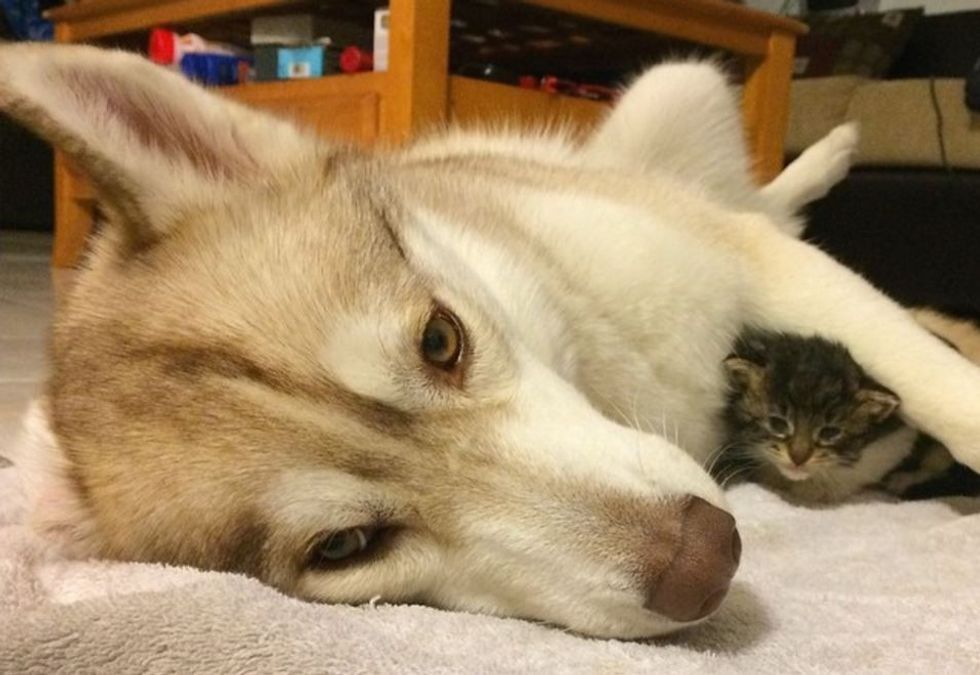 "By some miracle, she started suckling on Lilo and Lilo went full 'mom mode'." After some much needed cuddles, Rosie got her appetite back and began to eat.

The kitten started to turn around, slowly and surely. Lilo's motherly love brought the nearly lifeless kitten back from the brink. 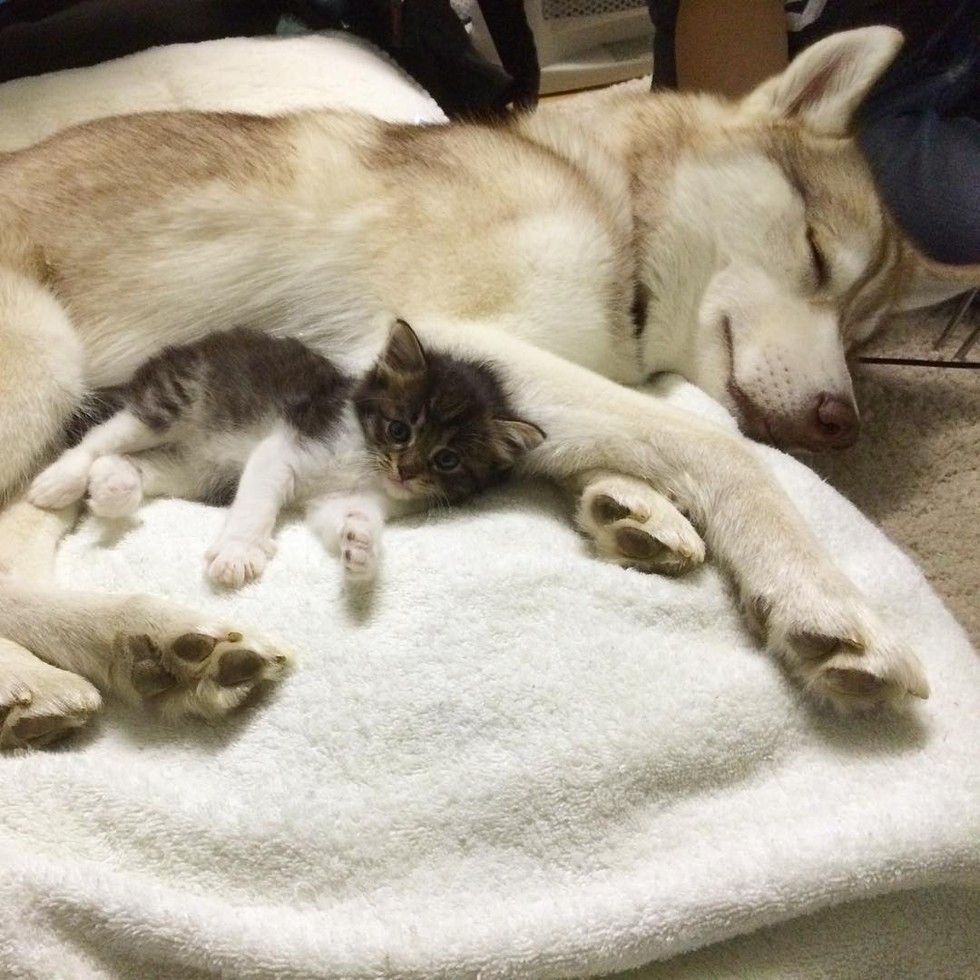 It is amazing what a few cuddles from a mother can do. It saved her life.

"Almost a year ago, Lilo became Rosie's mom," Bui told Love Meow. "Now the two of them help us take care of the 9 kittens together." 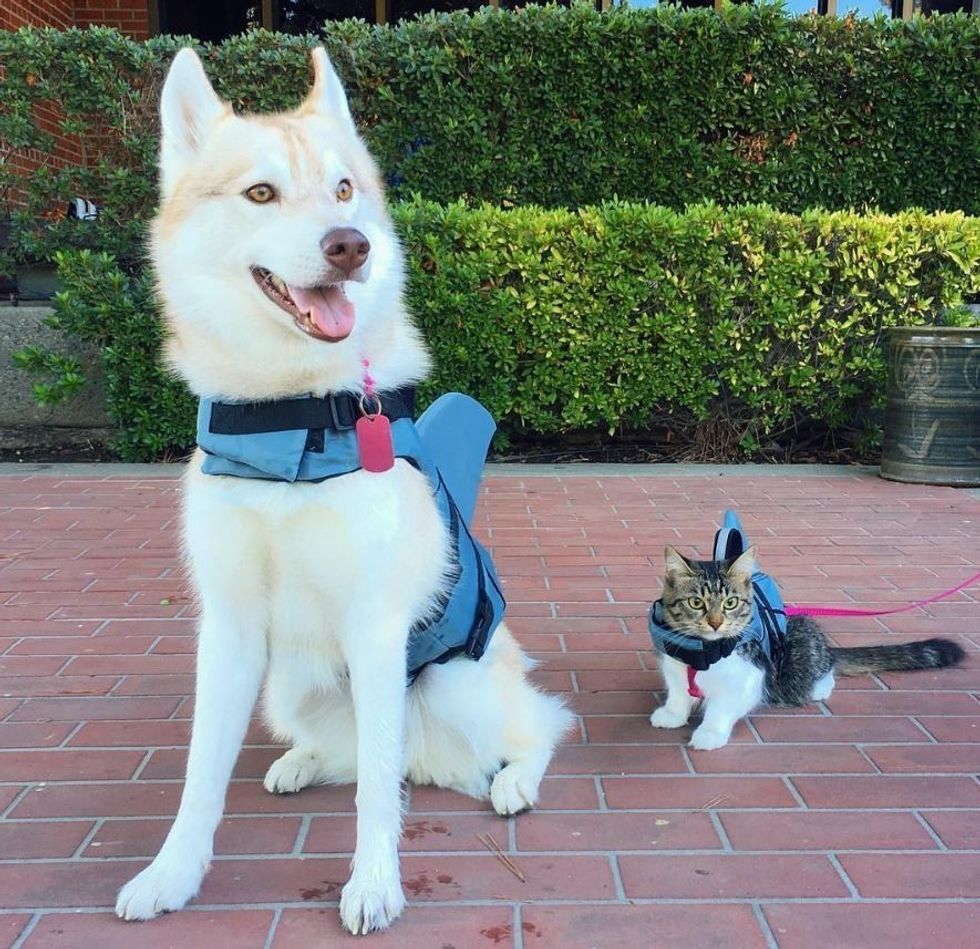 Growing up, Rosie learned everything from Lilo. She looked up to her and thought she was part Husky.

"Lilo has always had an innate motherly instinct, but she really surprised us when she went full surrogate mode! Lilo has never had puppies of her own, and never will. But motherhood may just be her calling." 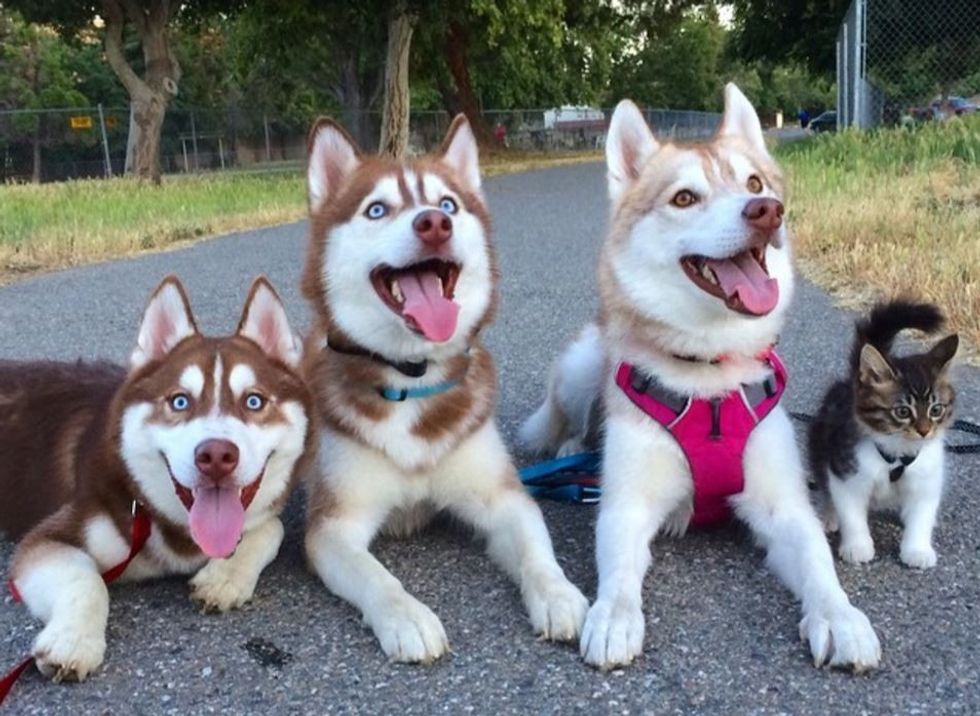 Rosie has all grown up and tries to run the pack like a leader. She knows her mama Lilo is always watching out for her every step of the way. 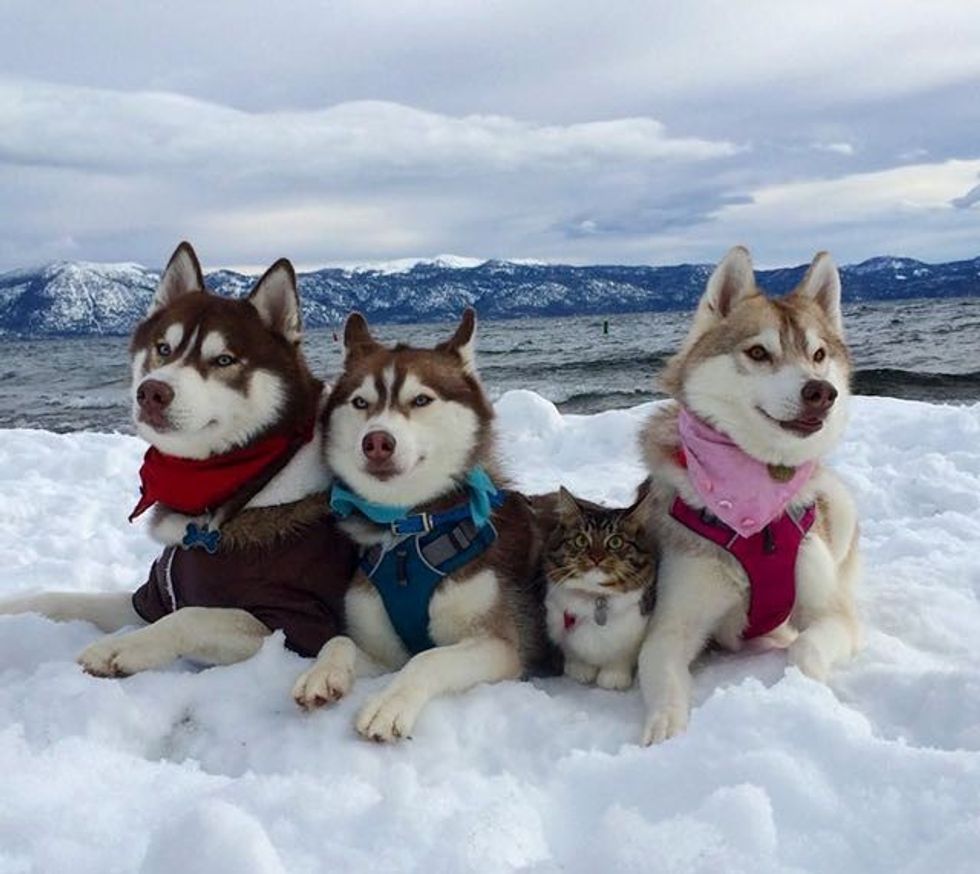 Sometimes Rosie pretends that she's actually a Husky just like her canine family. 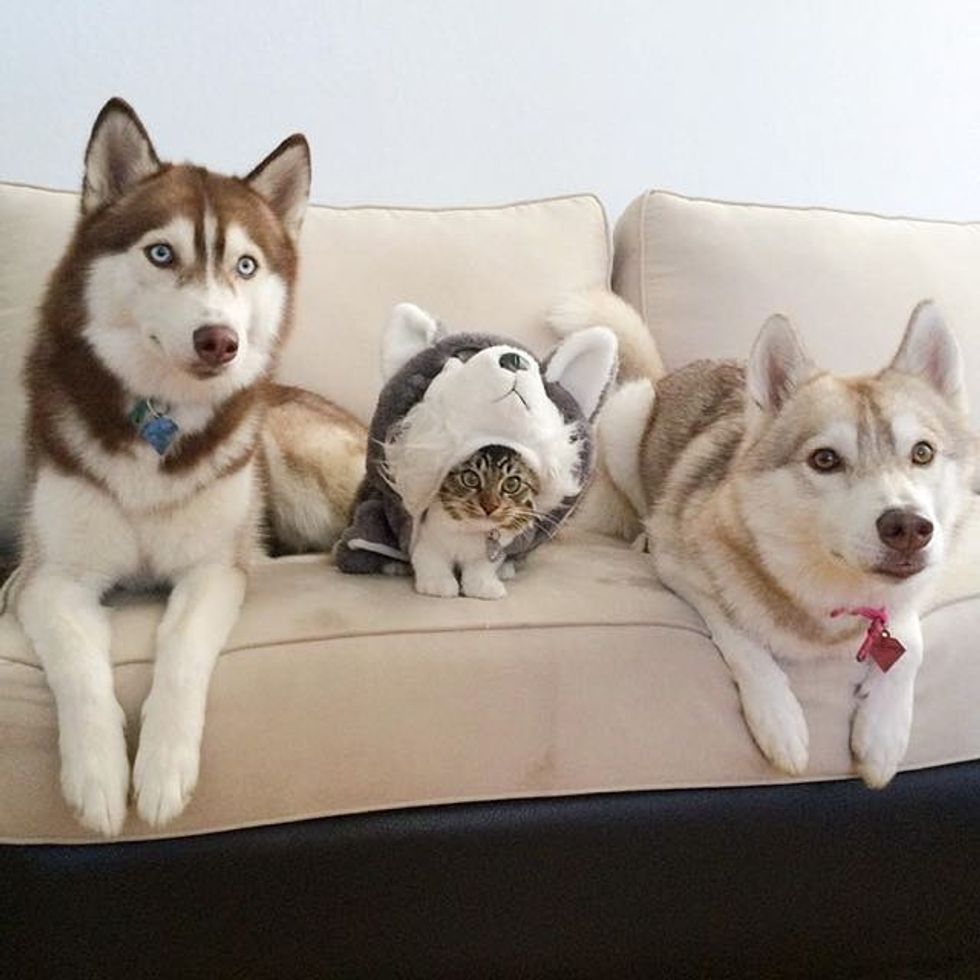 A year and a half ago, Rosie was barely hanging on, refusing to eat. Lilo's love breathed life back into this tiny ball of fur, and now she is a proud kitty with a Husky like character.

Animals seem to know when someone is in need, and they offer love. 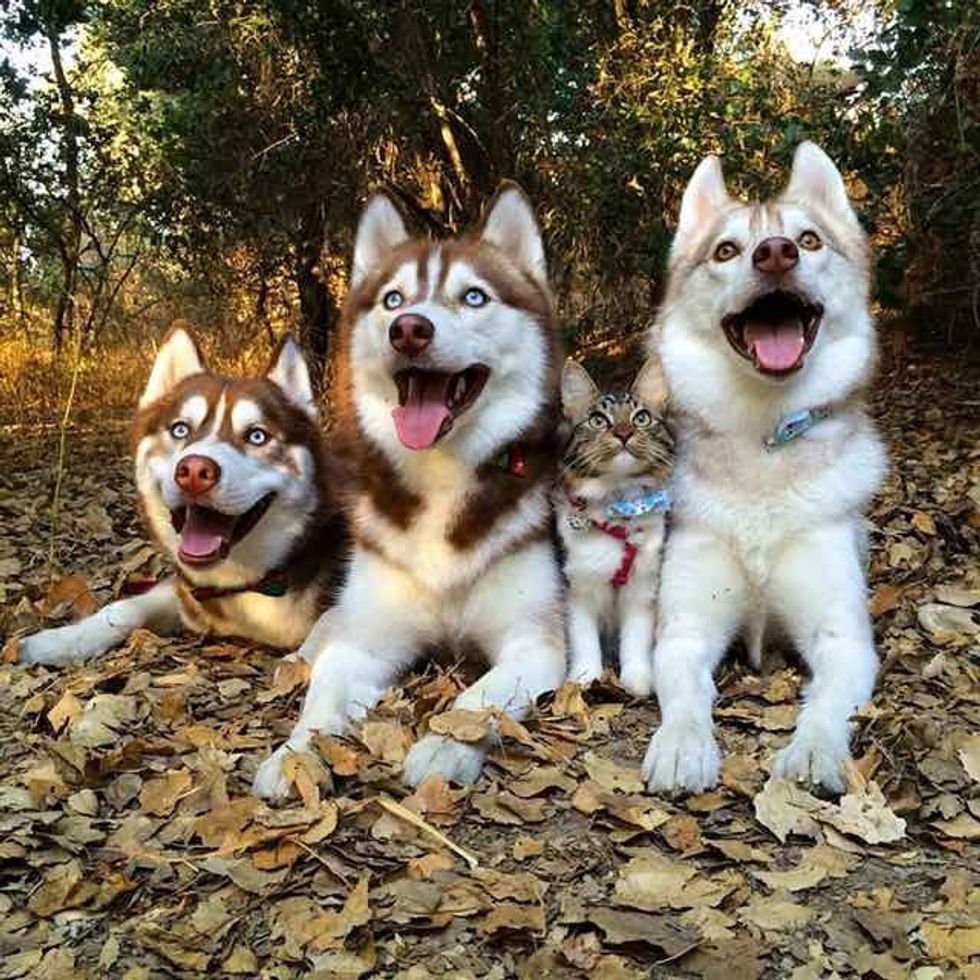 Related story: Dog Took Cat Out of Shelter and Becomes His Bodyguard for Life