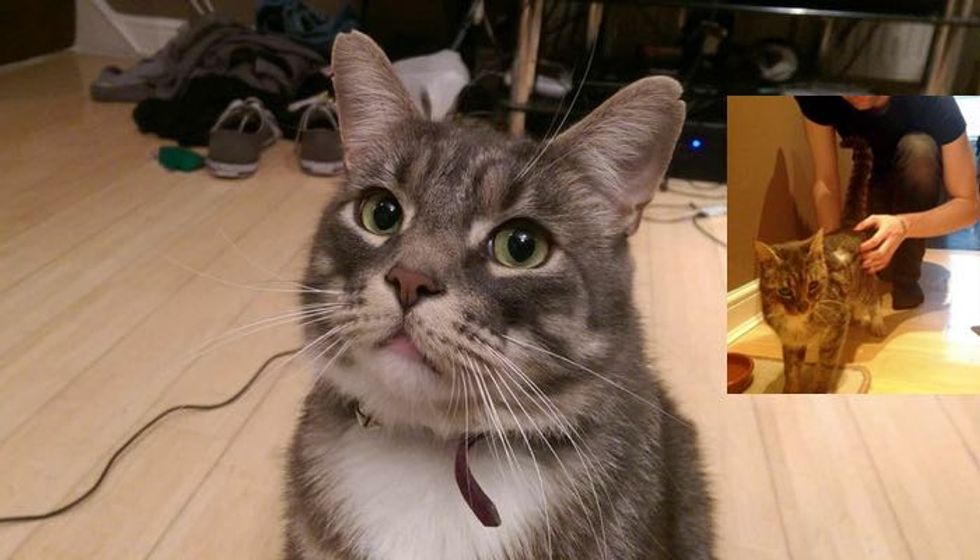 Humph the Cat from Car-hit Stray to Handsome Boy

Humphries the cat had a rough beginning to life, but with some love, a forever human and a comfortable home, he has totally transformed!

On the day to his forever home...

When Alan pmartin met Humph, "I instantly spied a kindred spirit when he completely blanked me and went for the cupboard where the food was kept instead," Alan said.

"Actually, his real name isn't Humph. The vets had called him Alan, but I thought having the same name as my cat would look a bit narcissistic. We drew straws and he lost, so got renamed Mr Humphries. Or Humph to his friends."

Humph had quite a traumatic life "He was a stray who was hit by a car. He had his jaw wired, stitches all up his stomach, a hairless patch on his side and a hernia operation. The vets gave him a 40% chance of survival, but he's nothing if not a fighter," Alan added.

"For the first three days I had him, he would't come upstairs - he'd just watch on as I went up to bed, but now he tends to sleep on the bed with me. I'll often wake up to his paw on my shoulder as if to say 'it's okay - it was just a dream, dude.'"

Warming up to his new human dad...

In the early days, Humph looked a bit bedraggled.

He had to wear the cone of shame to get treated.

He's very friendly and loves staying by his human's side watching sports.

He's become quite photogenic over the year.

"It's astonishing to see the transformation."

What a forever home can do. Share this story!