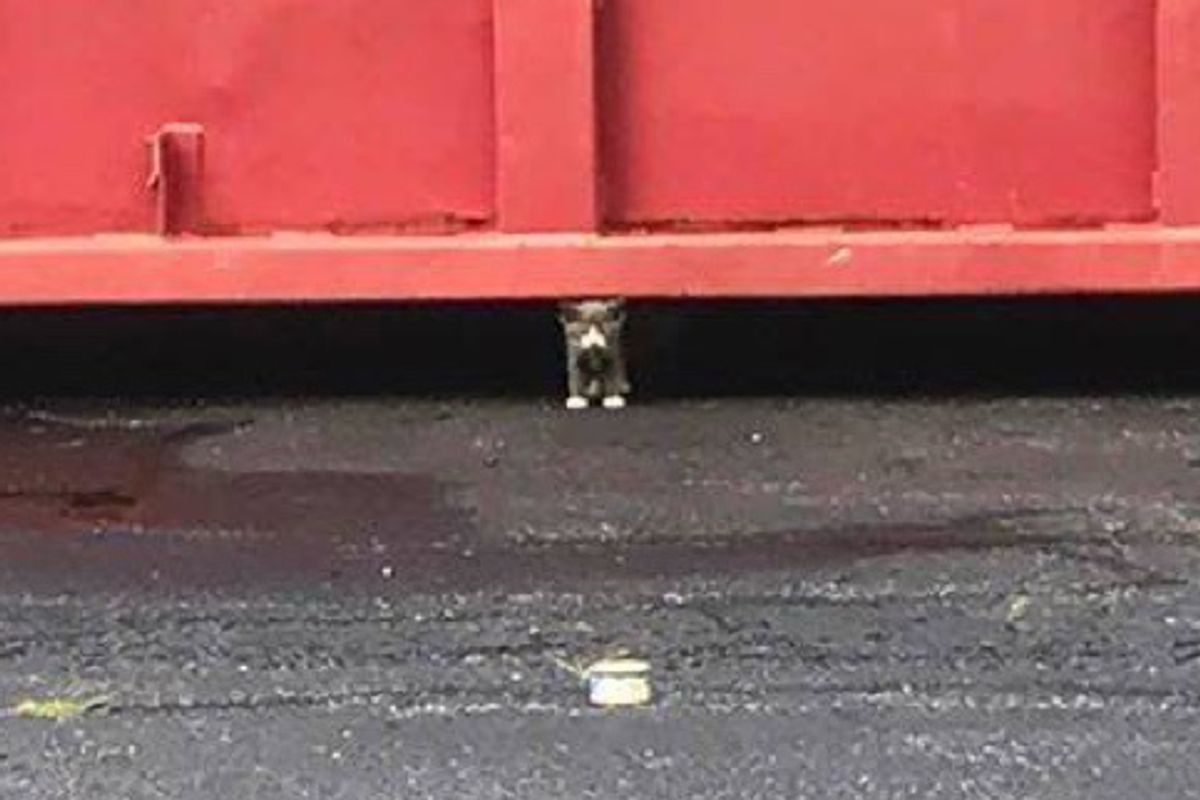 Kitten Comes Out From Underneath Large Dumpster Leads Rescuers to His Siblings...

Employees of a local business in Indiana were surprised when they discovered a tiny head poking out from underneath a large dumpster.

They immediately called for help, but only to find out that there were more than one kitten that needed to be rescued.

On June 30th, Here Kitty Kitty Rescue (in Elkhart, Indiana) responded to a call about the kitten and rushed to the location with humane traps, food and other tools. They followed the tiny kitten and found two others living in the tiny space under the large dumpster.

"Upon arrival there were three little ones about the age of five weeks old. They were hiding under a huge, long construction dumpster," Missy of Here Kitty Kitty Rescue told Love Meow.

The mother cat was nowhere in sight and the kittens were playing underneath the dumpster where rescuers could not reach them. They were told that the 30 feet long dumpster would be moved that day by construction workers, so time was urgent.

Rescuers Jennifer Gillispie and Missy set out a trap with wet food inside, but the kittens refused to go in. The clock was ticking, so they came up with another idea.

They had four swifter handles duct taped together to make a long pole. "We slowly pushed the kittens out one end of the dumpster," the rescue told Love Meow.

The mother cat is most likely feral. Rescuers have set live traps trying to catch her, but so far the mama cat hasn't returned.

All three kittens were rescued!Supplied by Here Kitty Kitty Rescue

All three kittens were saved! They appeared to be very feral but nothing a good home and canned food couldn't change. After a trip to the vet, they were on their way to their foster home.

Two weeks after the rescue, the kittens are doing very well and have started to enjoy their lives as indoor kitties.

The kittens explored their foster home and even befriended their resident cat.Supplied by Here Kitty Kitty Rescue

"They are fostering with the person that originally found them under the dumpster," the rescue told Love Meow.

According to the foster mom, the kittens are doing better every day and are learning that humans aren't that bad.

"They no longer run when the foster family comes in the room with them. They like to play and have started purring."

These three kittens were saved from a dangerous situation. Now they are purring and thriving in foster care and soon they will be ready for their forever loving home!