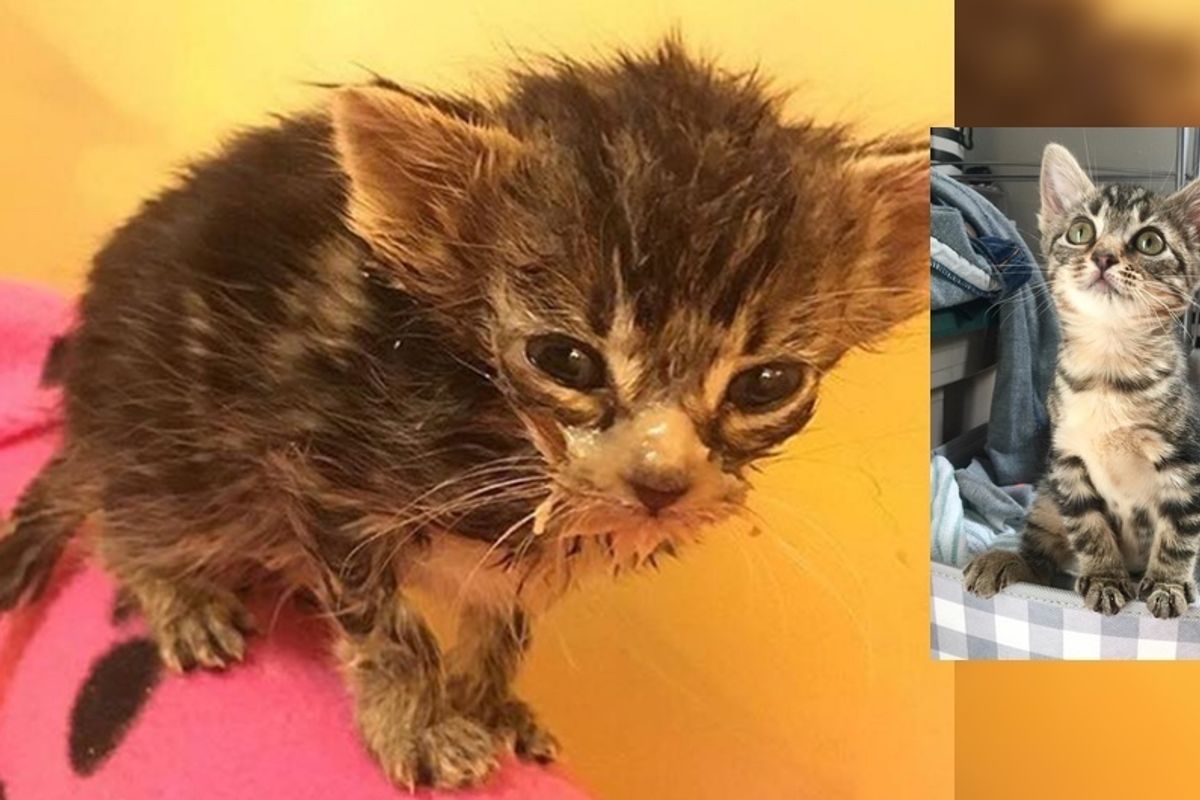 Kitten Found Huddling with Siblings Amongst Garbage Survives on Sheer Will, 10 Months After Rescue...

A tiny tabby kitten weighing less than a pound was found huddling with her siblings in a cardboard box amongst garbage. She was fighting for for life.

"Emma was found after Paul the cat guy received information from a social worker that five young kittens had been abandoned by their mother and were starving in the hunts point section of the south Bronx," Little Wanderers told Love Meow.

The orphaned kittens had been left for days while the social worker tried to get help. Two little ones couldn't make it. They found Little Wanderers (NYC-based animal rescue group) and the rescuers rushed to save the kittens.

"The social worker had tried to feed them by providing wet food but the kittens were too young to eat it and could only lick the gravy."

Rescuers gave the hungry babies kitten formula immediately after they got them.

A wonderful foster mom, Joanne, took them into her loving home and began around-the-clock care. At five weeks little Emma was just the weight of a two week old kitten.

"Joanne carefully tended to the young kittens, and took them back and forth to Little Wanderers resident veterinary practice. Sadly, Cooper and Gracie (Emma's siblings) expired within a week of rescue."

Emma the sole survivor held on for dear life. She had to be hospitalized for a month in the ICU at City Vet Care fighting for her life.

Her will to live was so extraordinarily strong that she eventually pulled through and made a full recovery. Her survival was nothing short of a miracle.

When it was time for little Emma to find her forever home, they knew the little kitten wanted a feline friend to play with.

Meanwhile, Erin was looking to adopt a kitten so her cat Nimbus could have a friend to play with, and that's when she learned about Emma. "I teared up when they sent me her vet documents... I couldn't say no," Erin told Love Meow.

Emma the single survivor will never be alone any more.

She joined her new family and made her way into her human's arms.

A few weeks after adoption, Emma's purrsonality shone through.

She didn't look like the same kitten that they found amongst the garbage. Little Emma, the mischief-maker, turned the laundry box into her new bed.

Then a special bond was formed and blossomed...

Emma met Nimbus, her new brother at her new home. Two months later, the two kitties banded together and began to create all sorts of antics and mischief in the house. Nimbus became Emma's big protective brother.

The two buddies are inseparable. They always have each other when they need a friend to lean on.

The two fill the house with all the love and cuddles in the world.

Emma was back to life from the brink of death. Look at her now!

It's been 10 months since they found Emma who weighed less than a pound. Now this little miracle kitty has grown into an adorable 10 pound lap cat, loving her life to the fullest.

"I forgot how small she was," Erin said. "She's a total sweetheart and a huge cuddle bug."