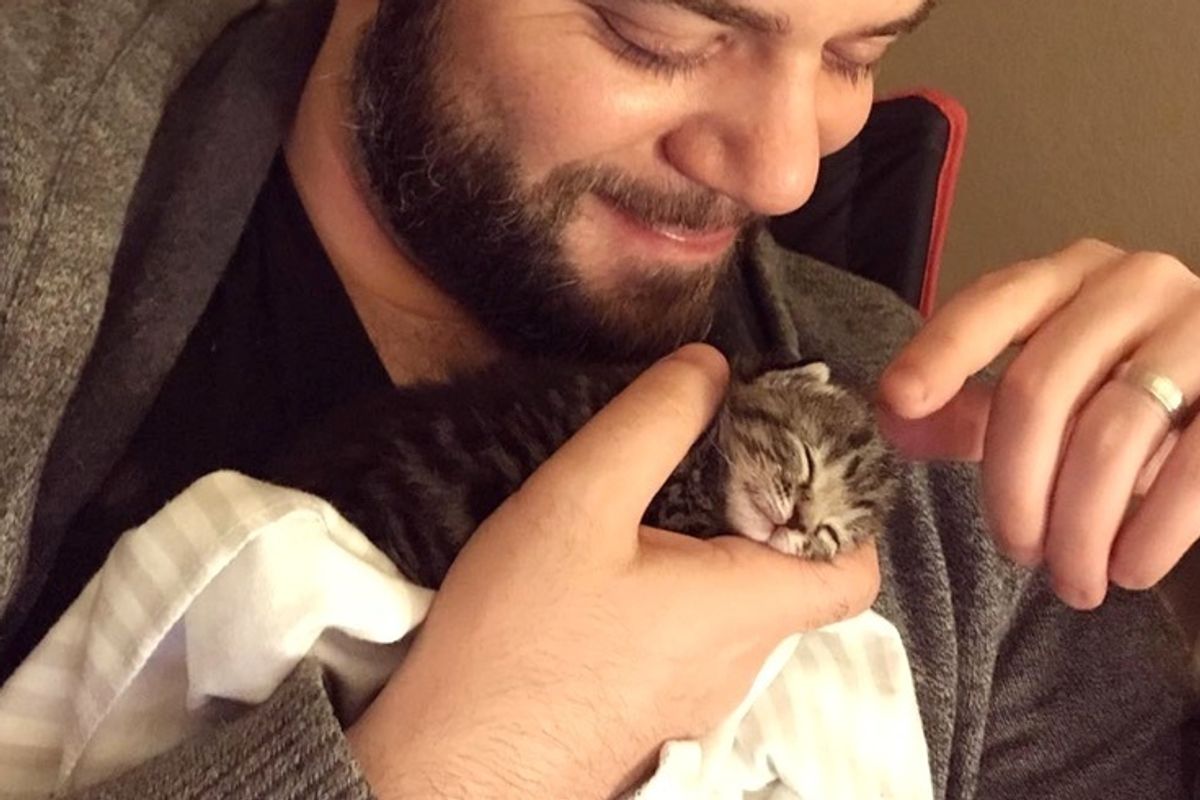 Six weeks ago, a worker in a metal plant (in Lowell, Arkansas) heard tiny meows coming from one of their packaging boxes high on a shelf.

They went to investigate and found a tiny kitten whose eyes hadn't even opened. She was named Tigre.

"They heard her crying and went up and got her down. They brought her to the front desk and asked the admin to call/find someone to take care of her," Lynsi, employee of Central States Manufacturing, told Love Meow.

"She was the only one, and it is suspected that the momma was moving her kittens and got scared off by the loud machines, leaving Tigre."

At the time, Nanette was at the front desk when the kitten was brought to her. Tigre was about a week and a half old. Since they weren't able to find the mother cat, she needed round-the-clock bottle feeding.

"Nanette already has a houseful of cats and wasn't able to take on another but she planned to bottle raise her and adopt her out until later that day, when I found out there was a kitten in need," Lynsi told Love Meow.

"I couldn't resist her sweetness. I was surprised no one had claimed her yet but I didn't hesitate. My husband is a huge cat lover and I knew he would be happy!"

After getting Tigre some food in her belly, the tabby girl started kneading away with her tiny paws and then drifted off in Lynsi's arms.

Lynsi took Tigre to work every day to keep up with her feeding schedule.

The little tabby needed to be fed every couple of hours and kept warm at all times.

Once she opened her eyes, she became more playful, curious and adventurous, wanting to know everything around her.

But nothing makes her happier than some cuddle time with her human parents.

Little Tigre decided to offer everyone a helping paw at the office. "She was definitely a helper. She loved to play on my desk and hide behind the computer monitors," Lynsi told Love Meow.

"She brightened many people's days and they stopped by to say 'hello' when they could."

Tigre became very attached to Lynsi and would cry if she wasn't cuddled. Lynsi always carried blankets with her so she could keep the kitten happy and snug.

"When I needed to warm up her bottles, I would wrap her up and carry her around with me. She was the happiest when she looked out and see where she was going," Lynsi told Love Meow.

"When she's ready for a nap, she crawls up in our lap/chest, gives us kisses and goes right to sleep," Lynsi told Love Meow.

A week ago, Tigre graduated from bottle feeding and learned to eat solid food all by herself. She made her human parents very proud.

When she's not playing or cuddling, she likes to groom her humans, keeping them clean.

"She's a very socialized kitten and loves to snuggle. My in-laws were in town this past weekend and being cat people they were shocked by how much she wanted to be held and loved to groom you."

A little over a month ago, Tigre was found in a packaging box, hungry and crying for her mother.

She was given a loving home, lots of good food and toys, and a canine friend to play with.

"Today she is a little over seven weeks old, and she has the sweetest personality," Lynsi told Love Meow.

"She's a huge cuddler and purrer. She especially loves being between her human momma and daddy."

Watch Tigre in this cute video: