Kitten Guards His Tiny Adopted Brother and Won't Leave His Side

Two tabby kittens have been inseparable since the day they were rescued together. 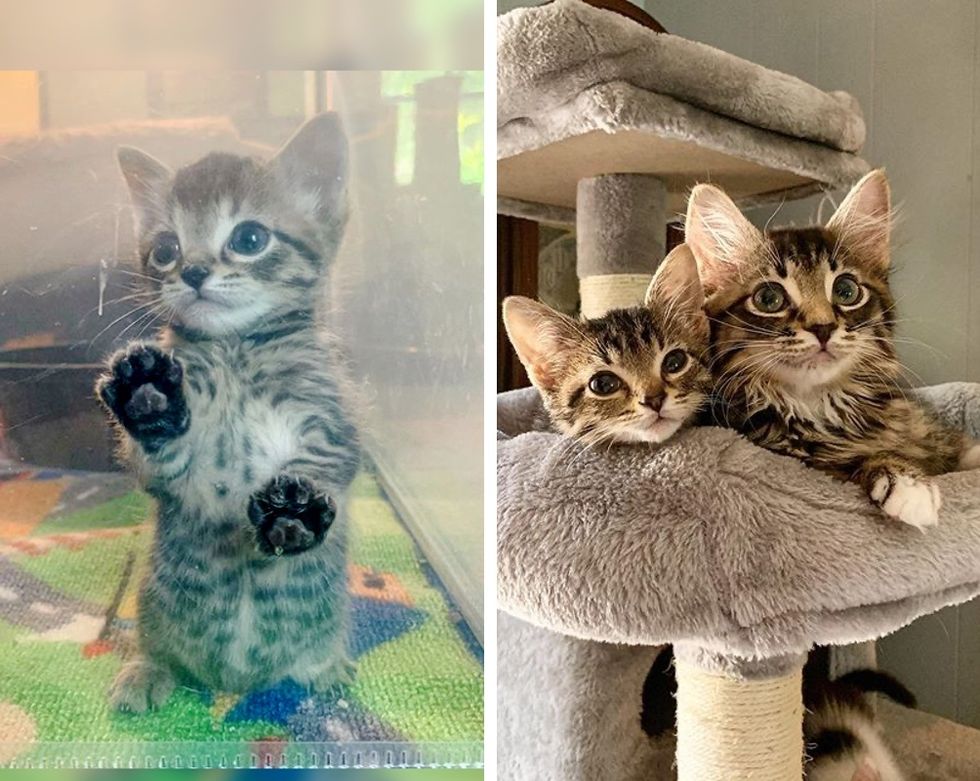 A local shelter in North Carolina had a cat carrier dropped off at their facility one day. They were told that there was a kitten inside. While they were looking for a volunteer to foster the tabby, they were surprised to discover another bundle of fur hiding under a towel.

Sarah Kelly, a foster volunteer of Sparkle Cat Rescue, stepped up to help. "They hadn't even seen the second kitten in the back until later," Sarah told Love Meow. "We have no idea how they ended up together. They are different ages but are very bonded and dependent on each other."

The tinier tabby (Barnes) who is 2-3 weeks younger, was just half the size of the big kitty (Noble). He clung to him and snuggled up in his fluff for comfort. 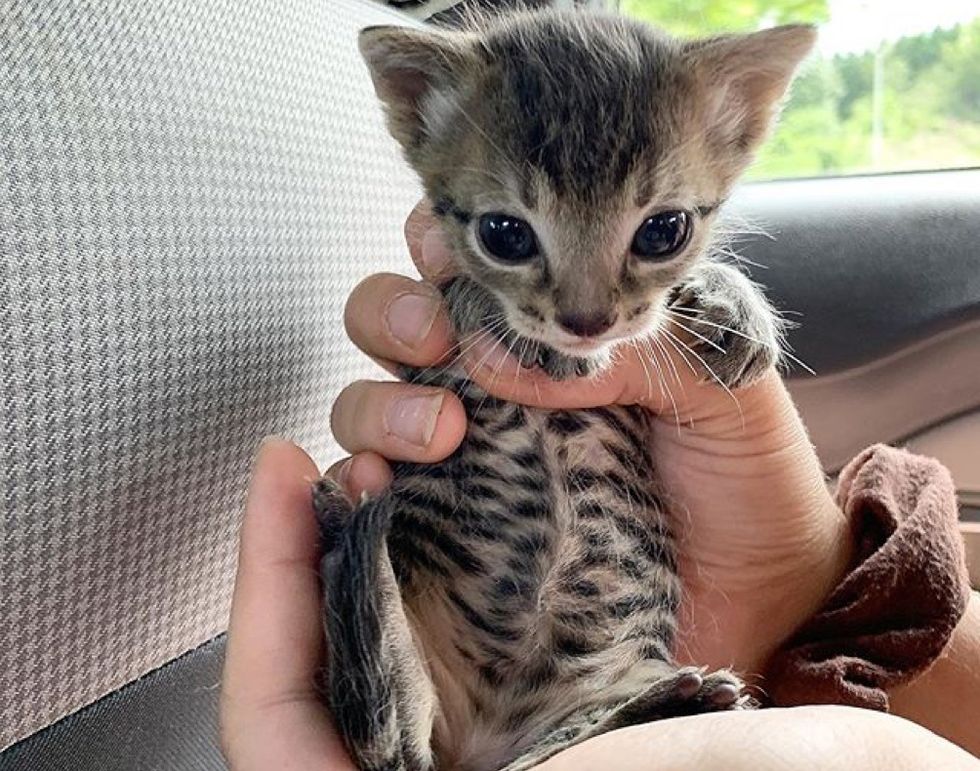 During the first few days in foster care, the two brothers were completely inseparable, where Barnes stayed in Noble's shadow as they were trying to acclimate to life as indoor cats.

Barnes kept his brother close at all times as if he was his shield, and Noble never left his side as he needed him to feel safe around people. 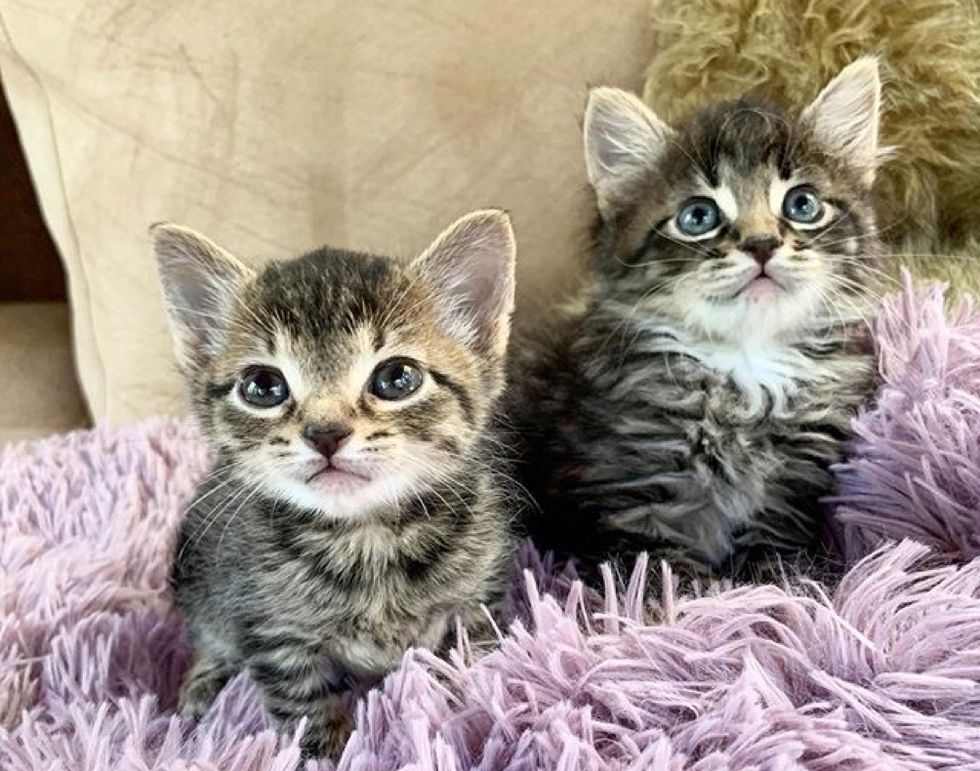 Baby Barnes had some health issues that went on for a while, but Noble was always there comforting him and showering him with love. They would seek each other out if they were apart for even a short while.

Noble kept an eye on his little brother and would come running to his needs and try to care for him. 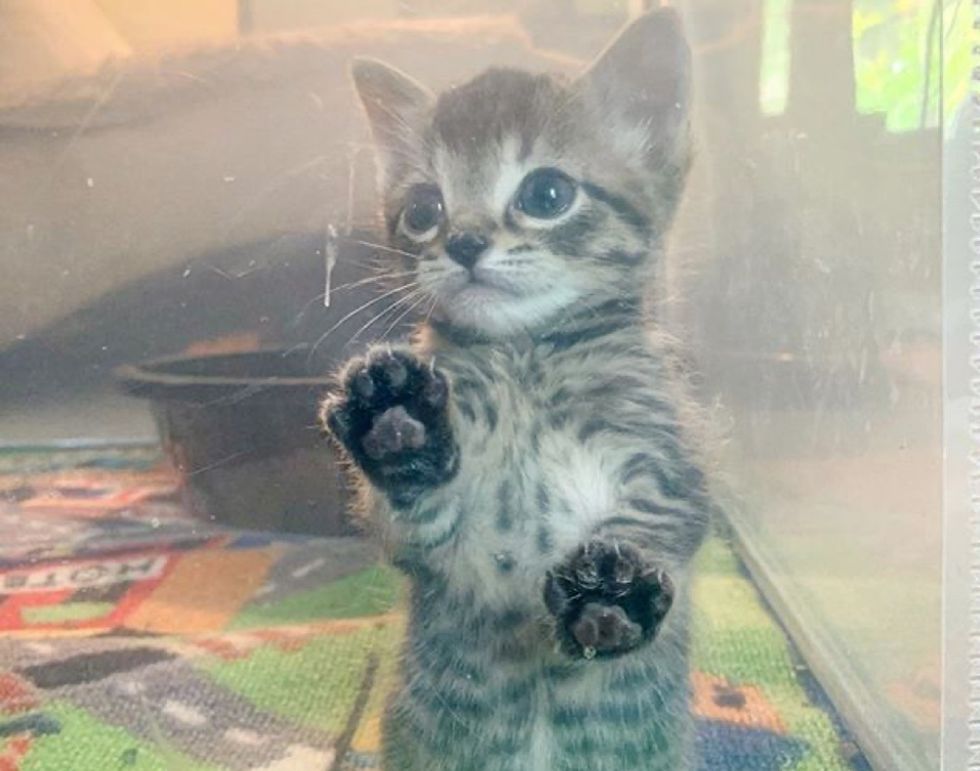 Barnes had a lot of growing to do, and Noble was as supportive as could be. He watched Barnes as he was treated for GI issues and cheered him on with licks and cuddles.

With Noble's help, the little tabby boy was finally big enough for his next chapter in life. 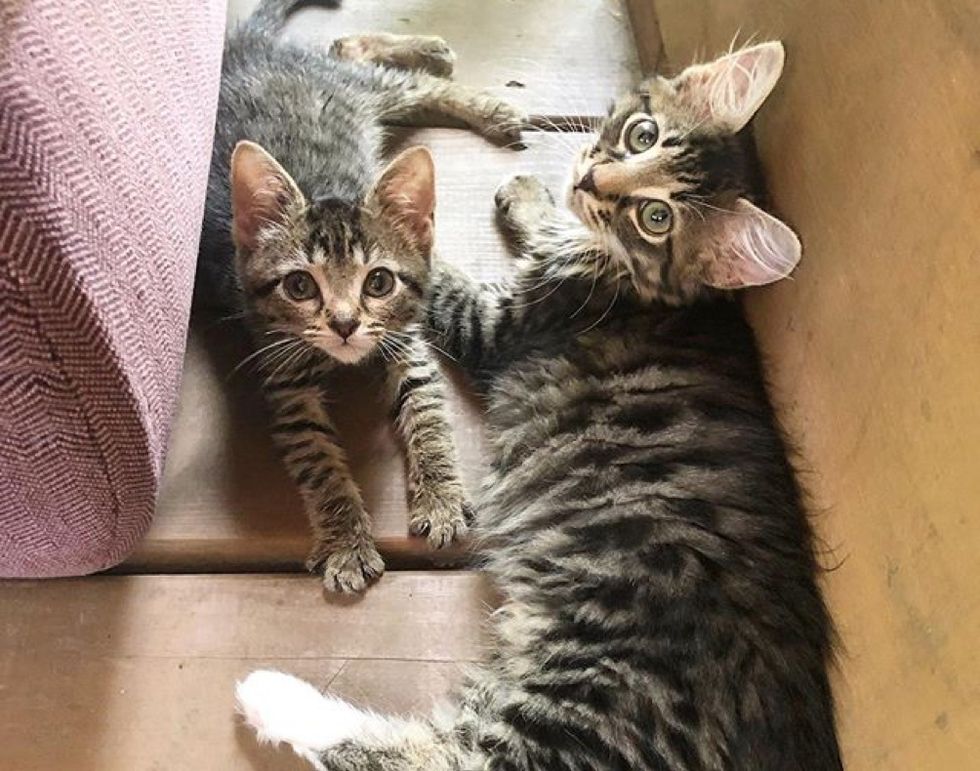 Knowing how much they depend on each other, the rescue was determined to get them adopted together into a loving home.

Growing up, Barnes was never short of hugs from his very protective brother. 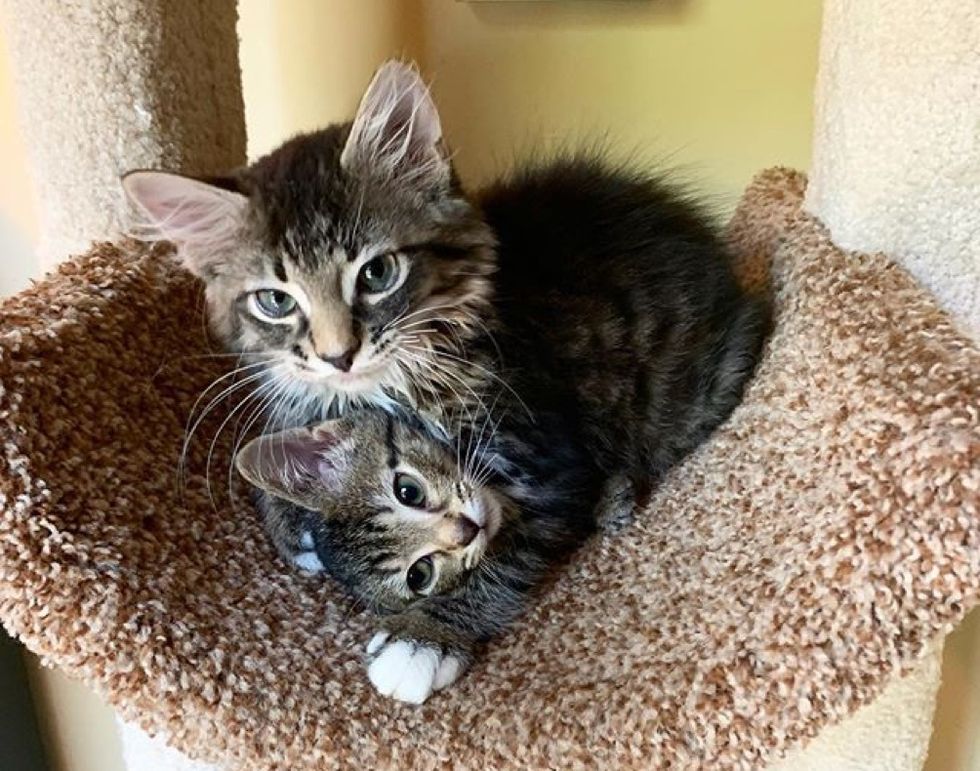 Michelle came across the story of the two feline brothers and fell head over heels for them. She drove all the way from Chicago to meet the boys. It was love at first sight.

The kittens curled up in her arms as if they had known her all their lives. Barnes made his way up on his new dad's shoulder and went right to sleep. 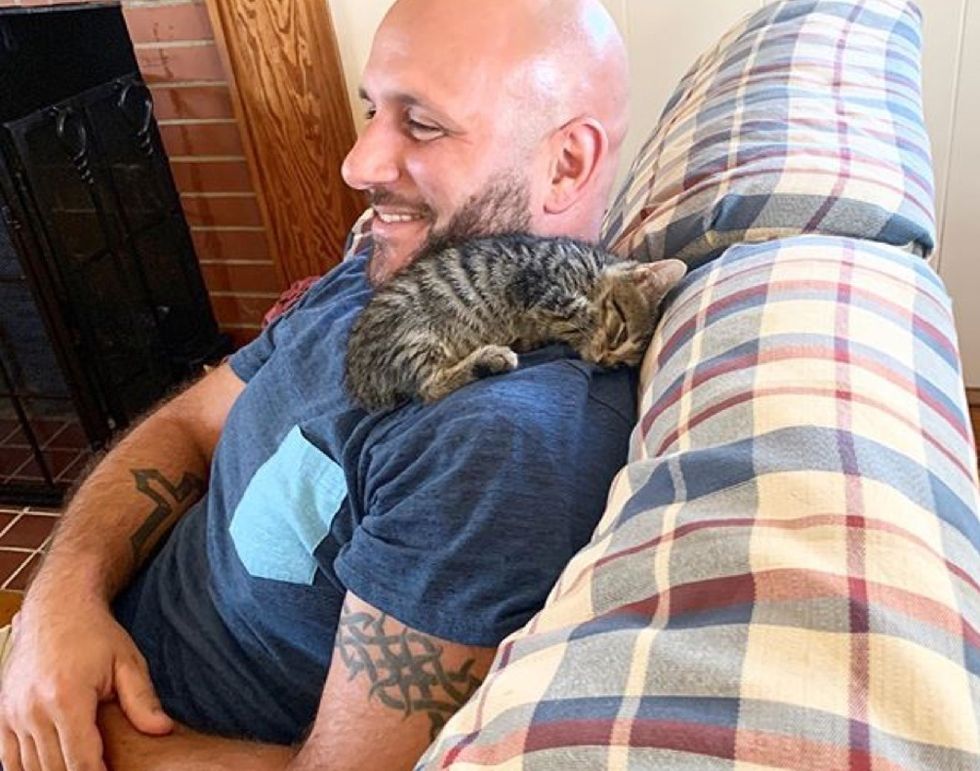 The two kitties, now Tobias and Caleb, are ruling the roost like kings.

"Michelle was meant to be their mom and her love for them is so special! She has been so patient and supportive of all the care and extra TLC that baby Tobias needs," Sarah said. "The two boys are perfect in every way and have beat all the odds to have this magical of a happily ever after." 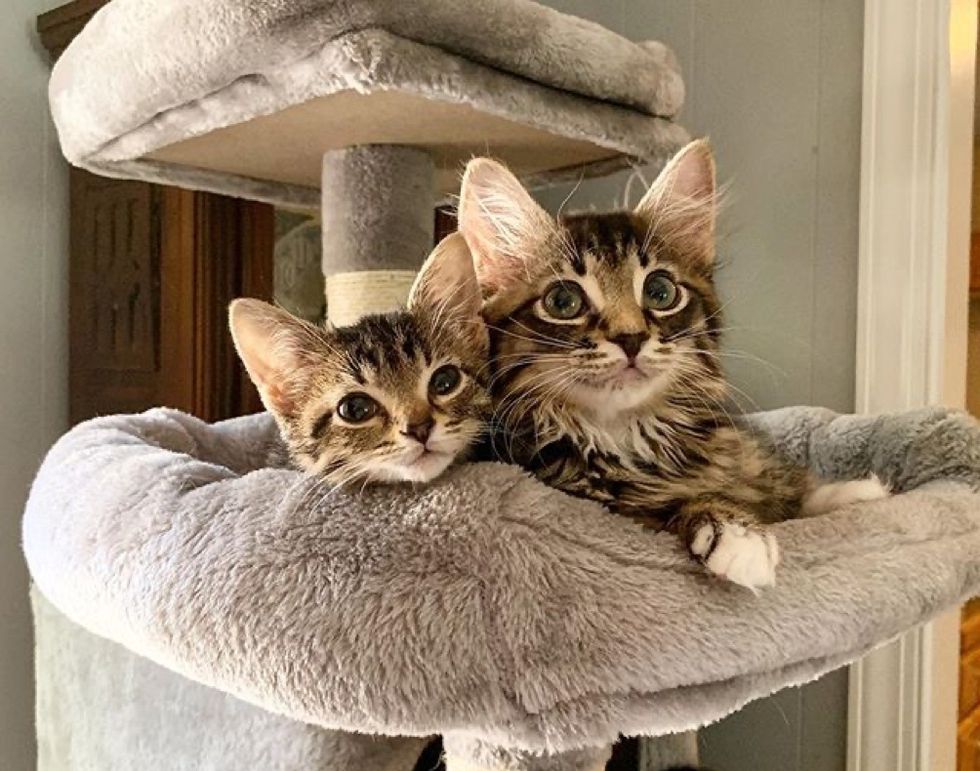 "Knowing they are finally home with the best parents ever brings us so much joy."

Tobias, the younger of the two, has blossomed into a handsome tabby cat. His loving brother Caleb has grown a magnificent coat of fluff that adds to his regality. 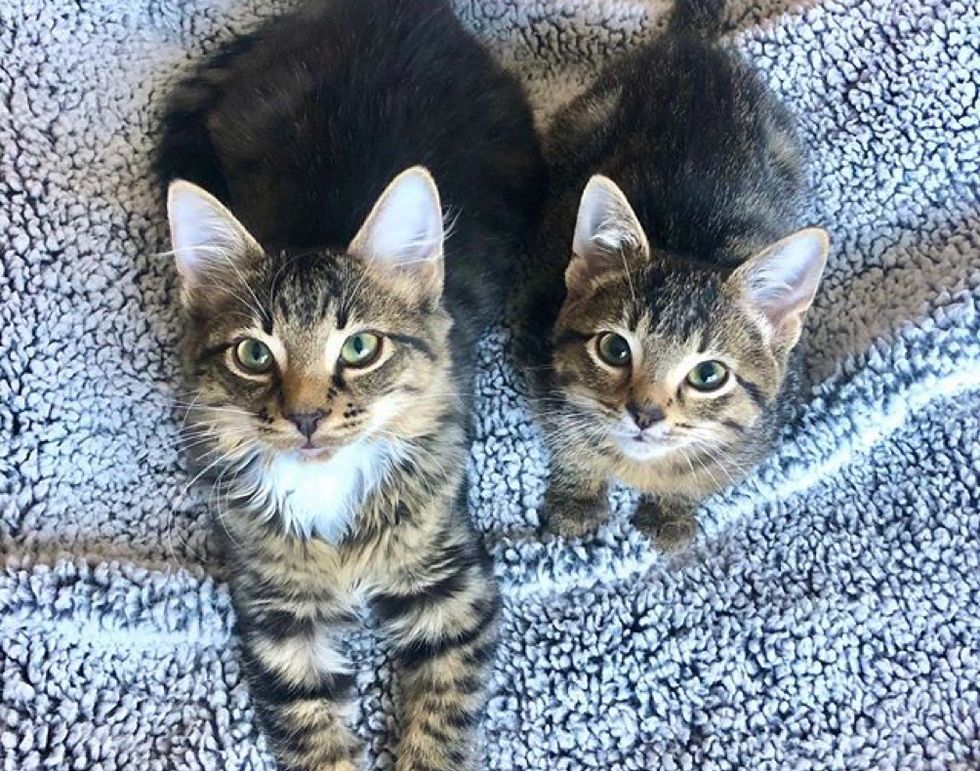 It's been about one year since they were rescued together from an uncertain fate. Tobias tips the scales at 11.9 pounds. He makes his family so proud! 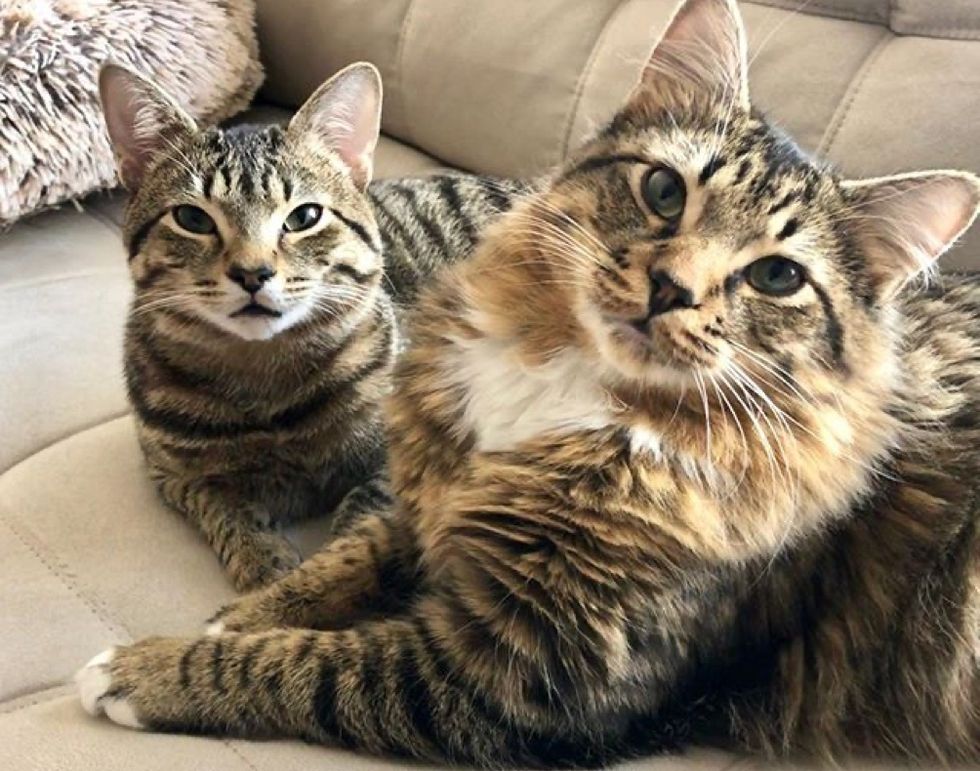