Three kittens with cow markings came to their foster home for a chance at a better life. 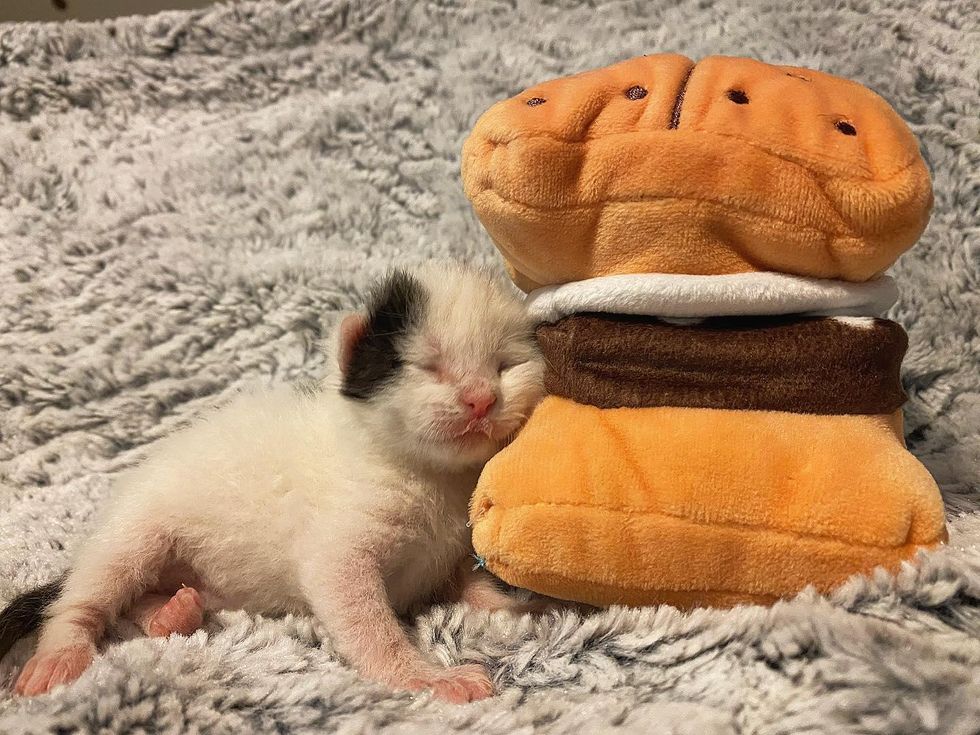 A feline trio was brought to Sparkle Cat Rescue (in North Carolina), in need of bottle feedings and lots of TLC. These orphaned kittens with cow markings were just a few days old and still had their eyes closed.

They were immediately placed in a foster home with an incubator to help regulate their body temperatures. Without a nursing mom, they were faced with challenges, but thankfully, Sarah Kelly, an experienced fosterer, took them into her care just in time.

She kept the kittens warm, fed and cared for around the clock, and provided plenty of cuddle toys for them to snuggle with. The trio quickly started to put on weight and even found their voices. 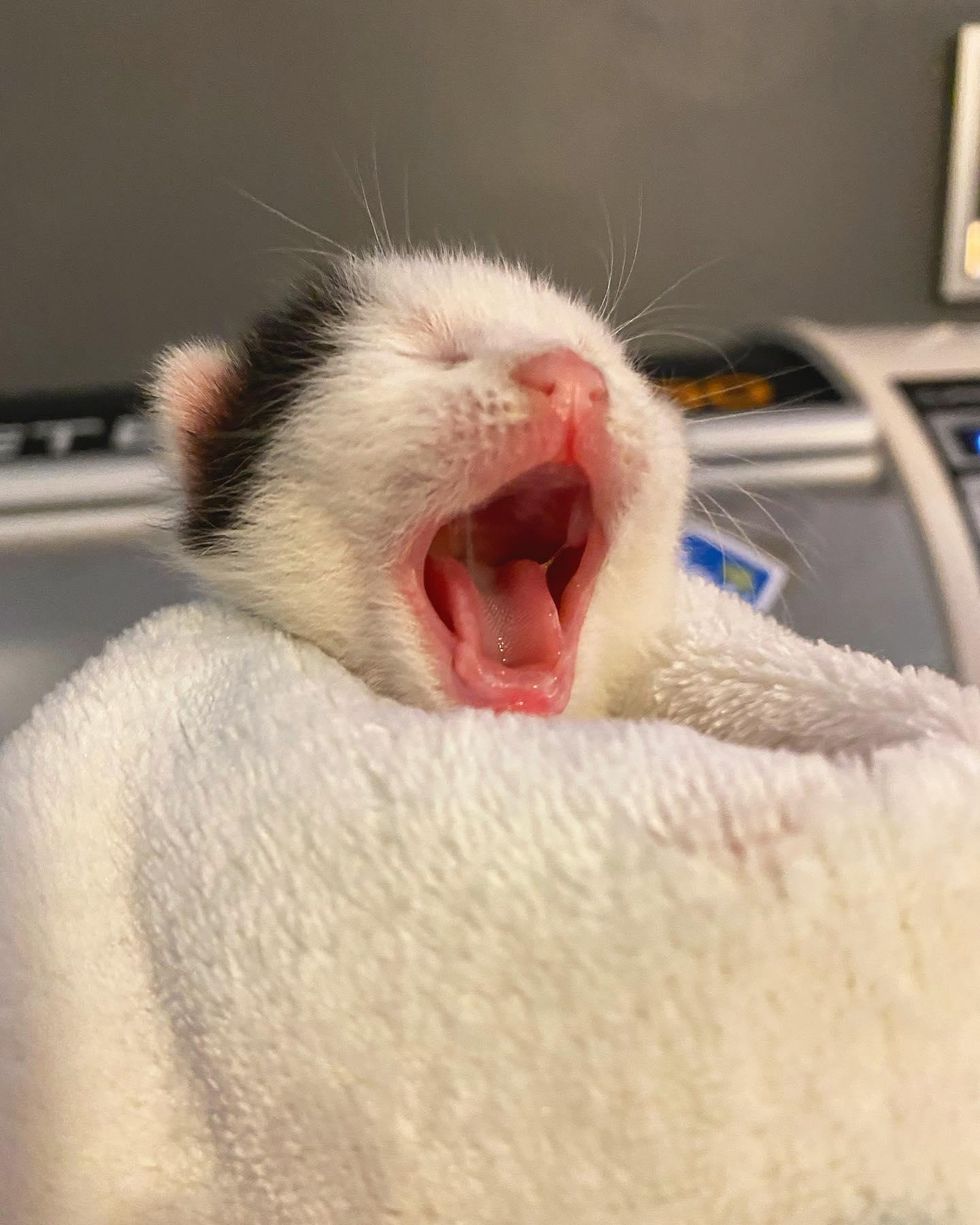 The cow kittens were named Graham, Mal (short for Marshmallow), and Hershey after S'mores. A few days later, their eyes peeped open and they looked around, trying to figure out their surroundings.

The kittens were voracious eaters and their bottle could never be served fast enough. 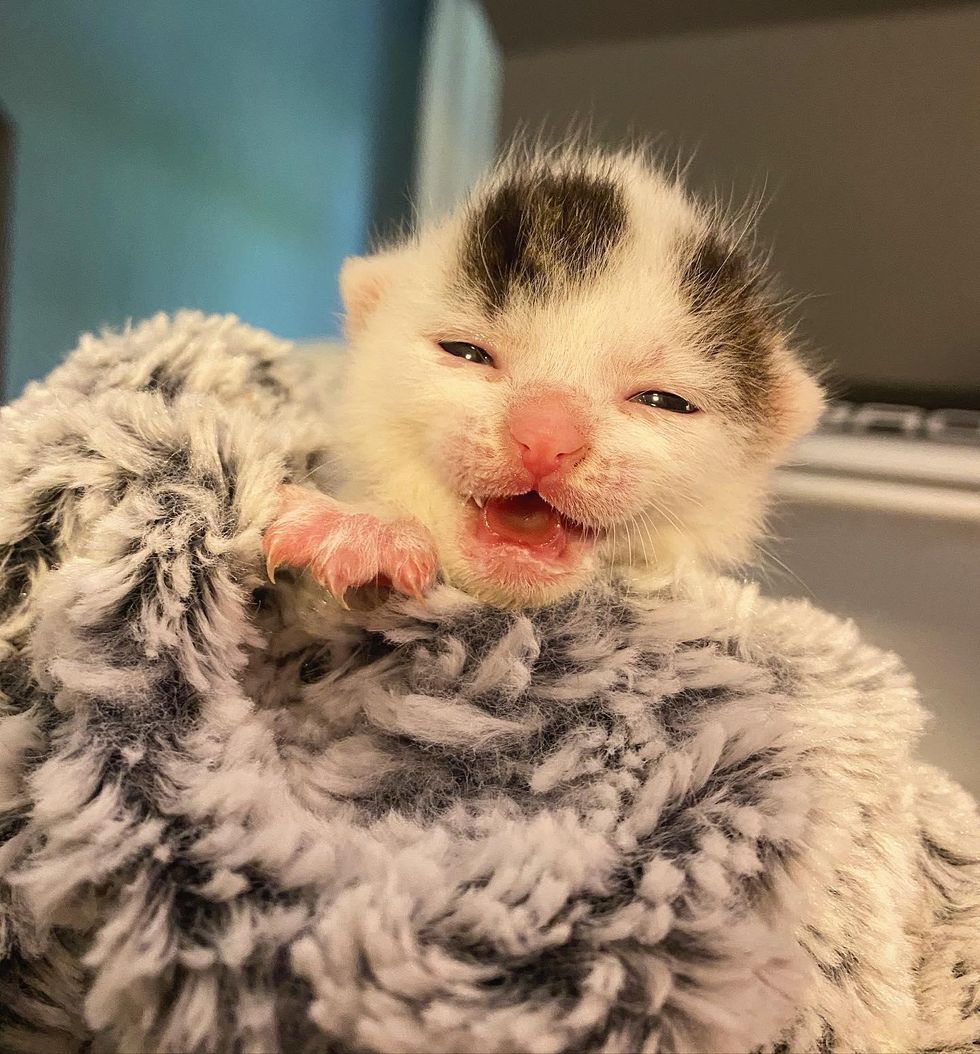 While Sarah was feeding one hungry mouth, the other two impatiently screamed for their turn. Despite being so young, they were full of energy and striving to grow big and strong.

Mal was the most sleepy one of the crew, while Graham was the loudest chatterbox. 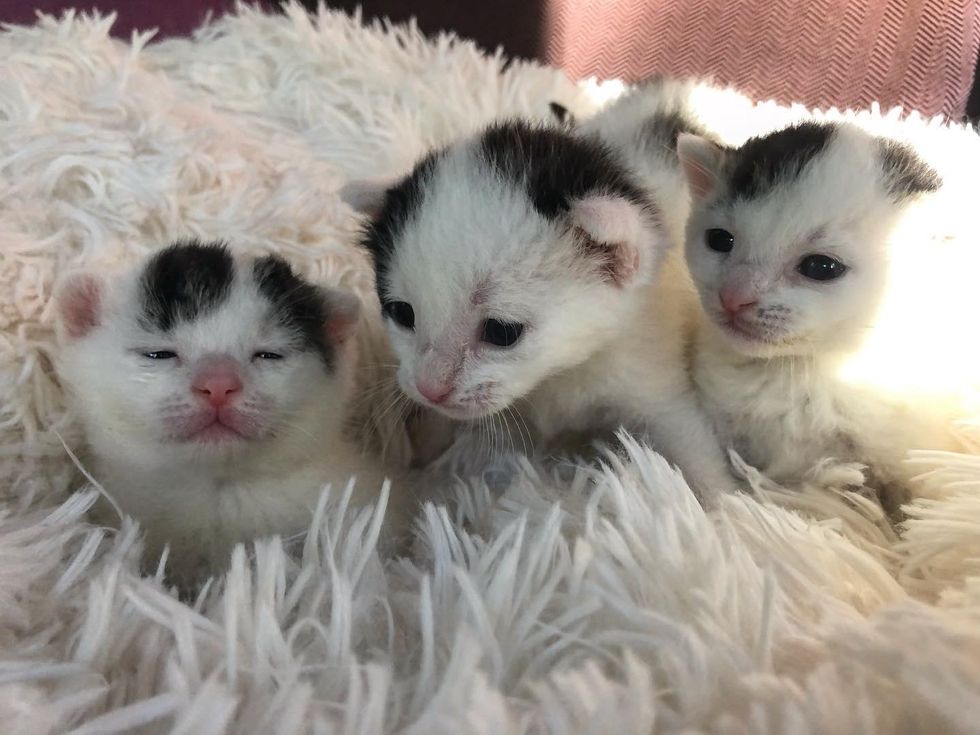 After getting their bellies filled, the three of them would roll around wrestling, and fall asleep all curled up in an adorable cuddle puddle.

The happy little kittens waved their paws and stretched their toes in bliss. 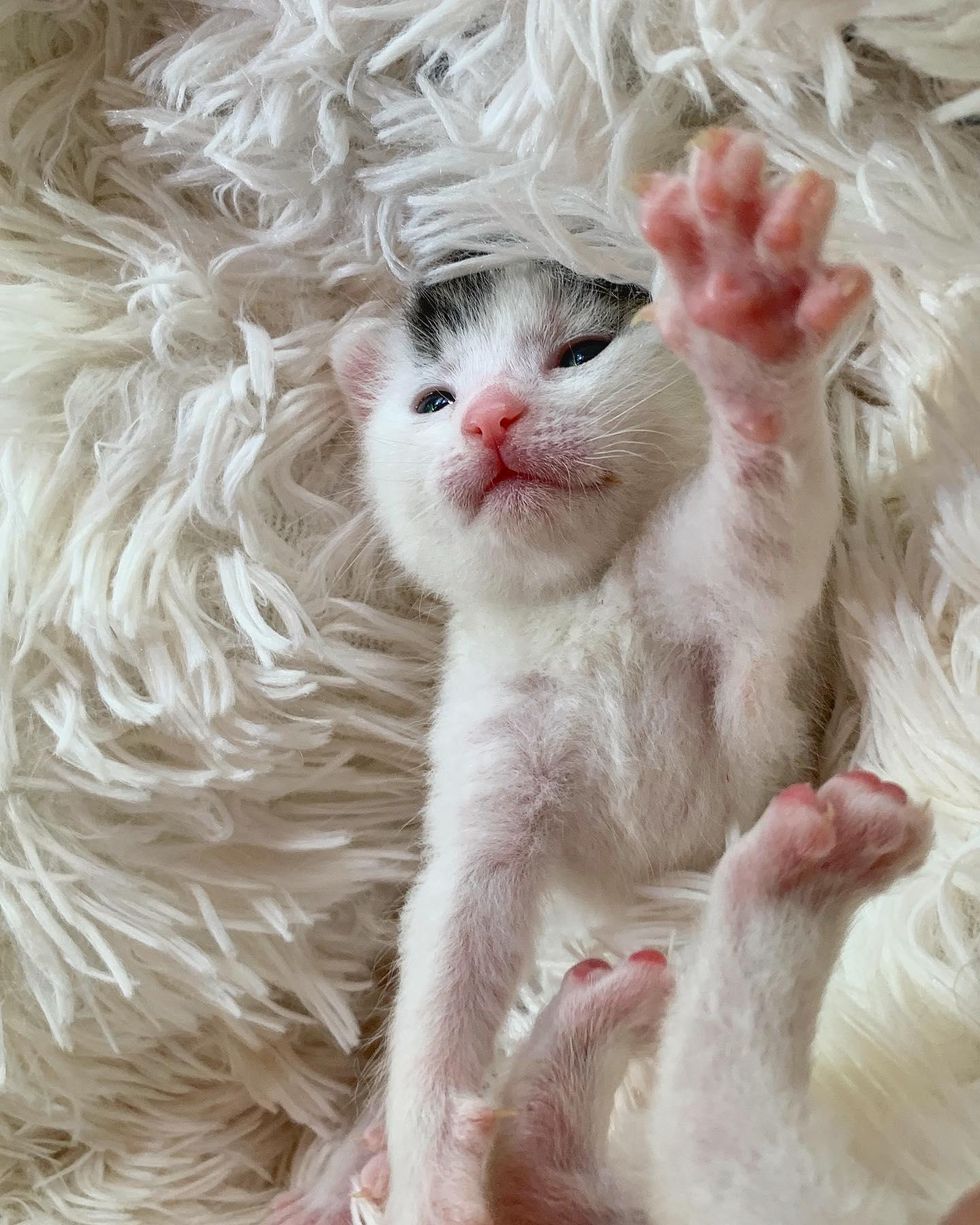 Mal was the laid-back, mellow one of the bunch, who enjoyed making biscuits while purring up a storm. Her brother Graham had a lot to say and wasn't shy of voicing his many opinions, especially when it came to feeding time.

Hershey was the sister that the other litter mates looked up to. "She taught Graham the correct way to clean those perfect pink beans," Sarah shared. 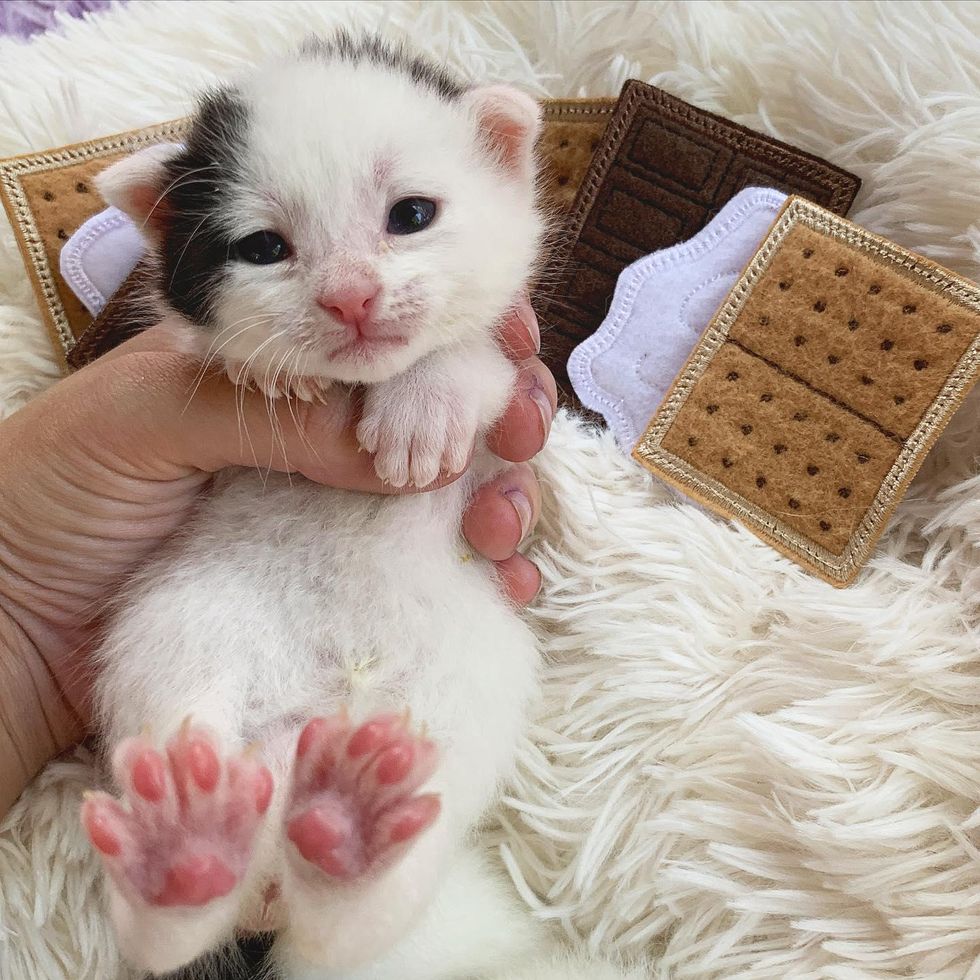 "While she may be the smallest of the litter, she has the biggest heart and has been such a fighter from the moment we took her in."

With good nutrition and plenty of love to go around, they quickly turned into chunky little kittens. 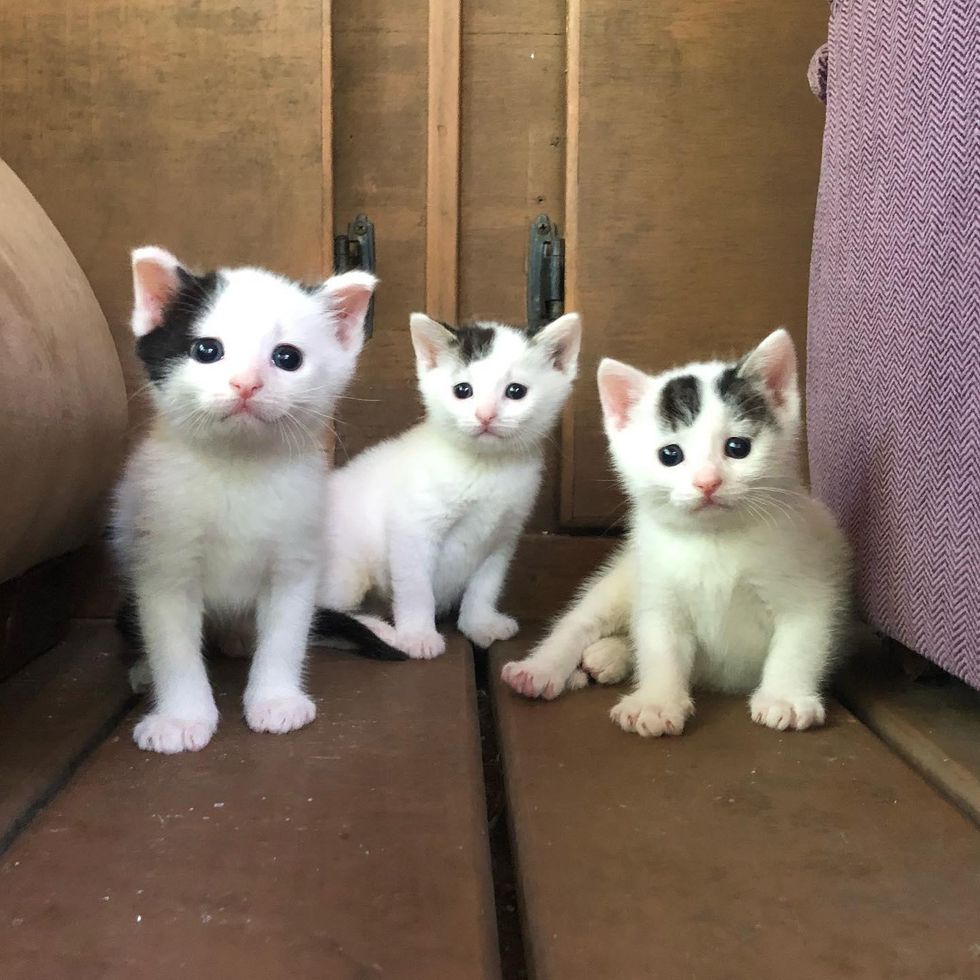 As they grew bigger and bolder, they started to venture and explore as a trio, creating all sorts of antics around the house.

They went from being pint-sized bottle babies to playful, mischievous kittens. Their foster journey also captivated many people's hearts over social media. 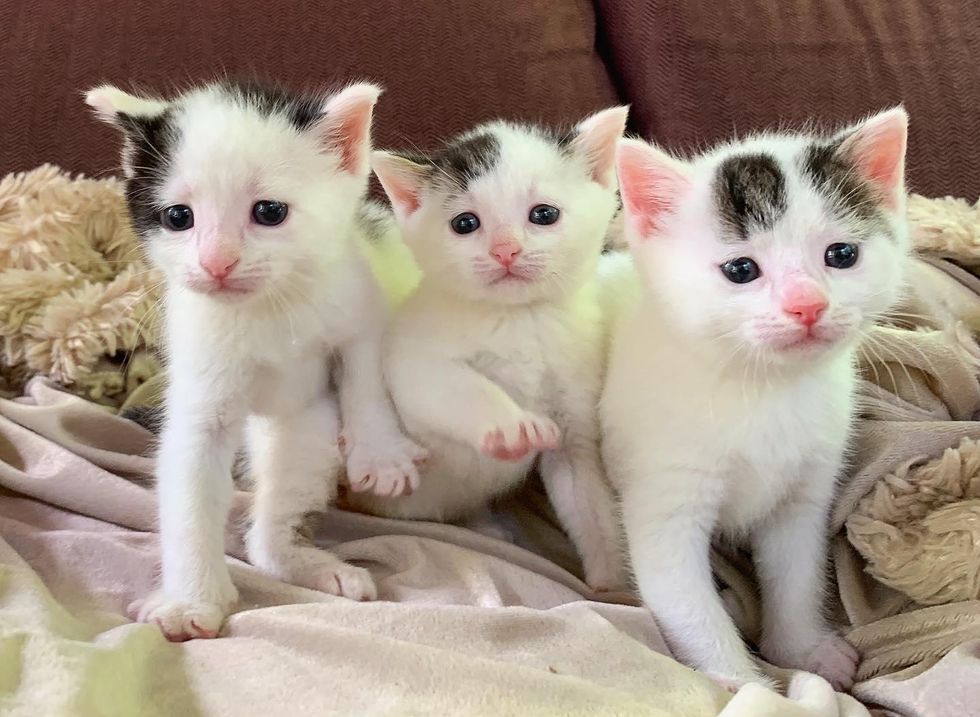 Sarah's resident cat Tio, who has a soft spot for kittens in need, came to offer some feline wisdom to the little ones. He stayed with the kittens, taught them boundaries and showered them with love. 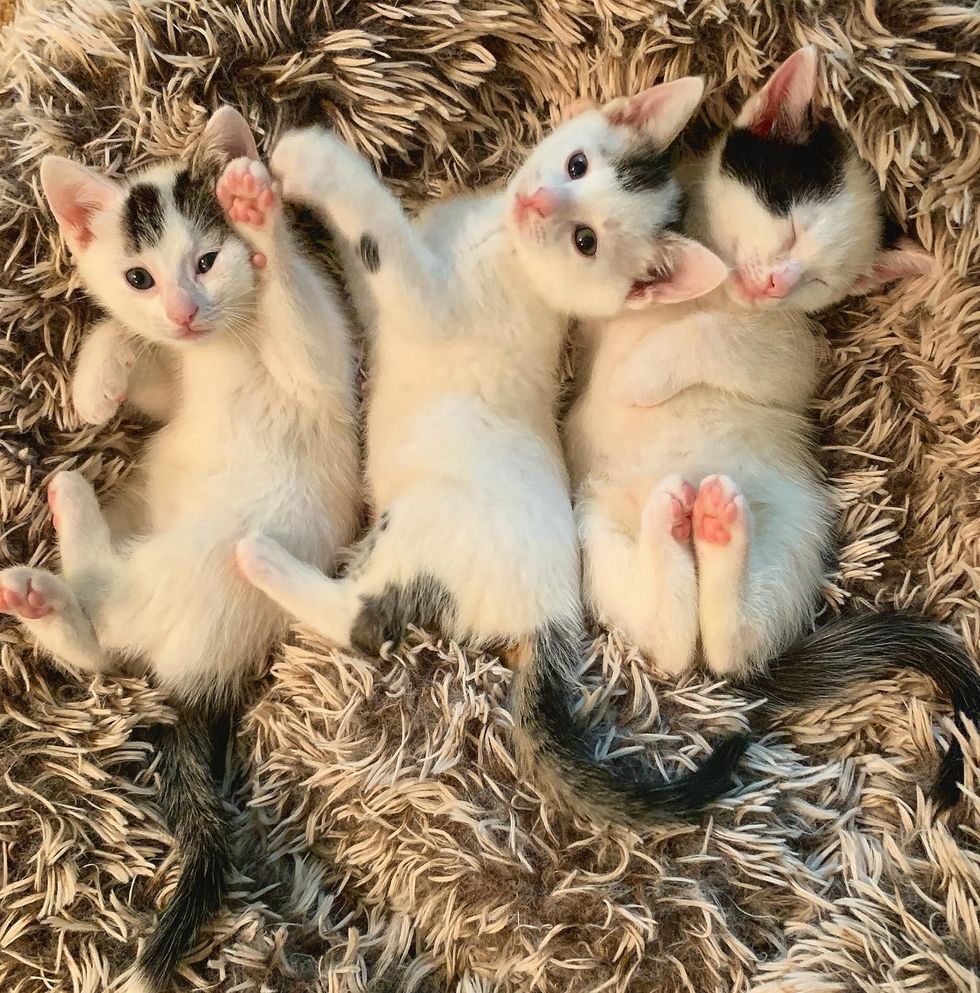 "They loved hanging out with their favorite foster brother, Tio, soaking up some sunshine and snuggles," Sarah wrote.

Hershey adored Tio and squeezed into the cat tree to cuddle with him. 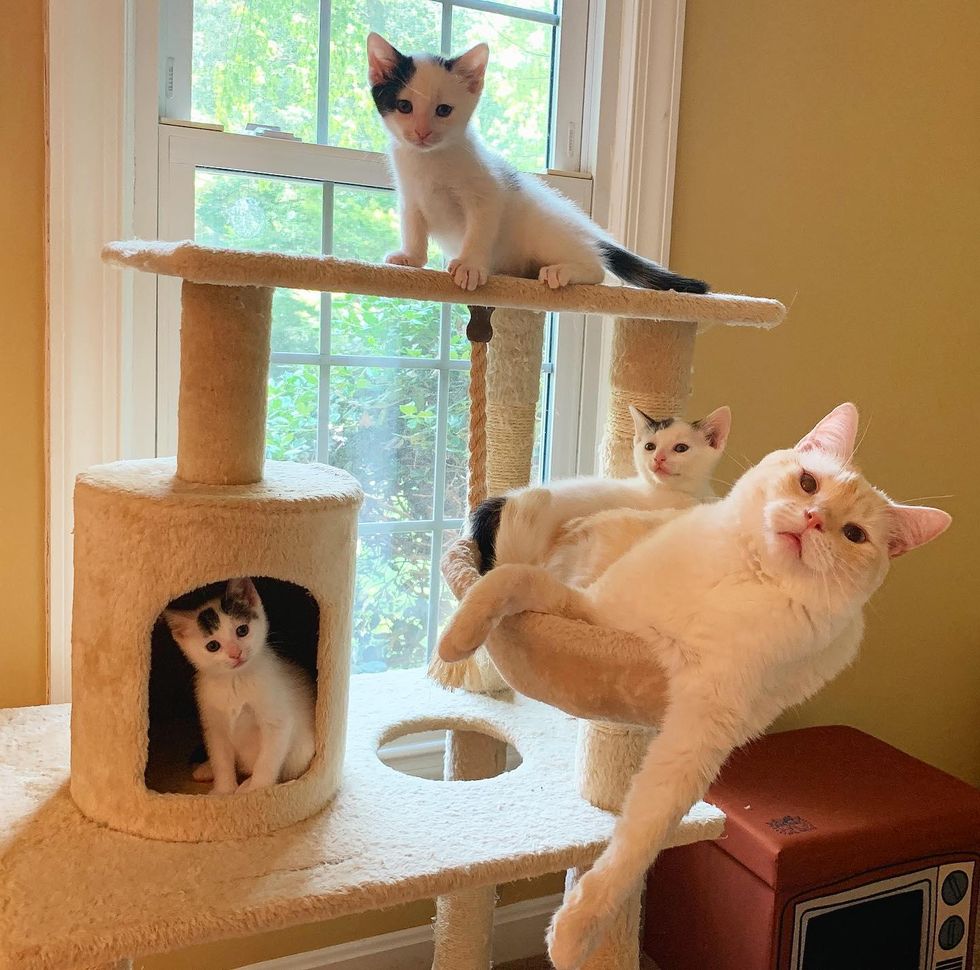 The S'mores kittens had their lives turned around at a tender age. They blossomed into happy, rambunctious purr machines.

After two months in foster care, they were ready to step paws into a new chapter in life. 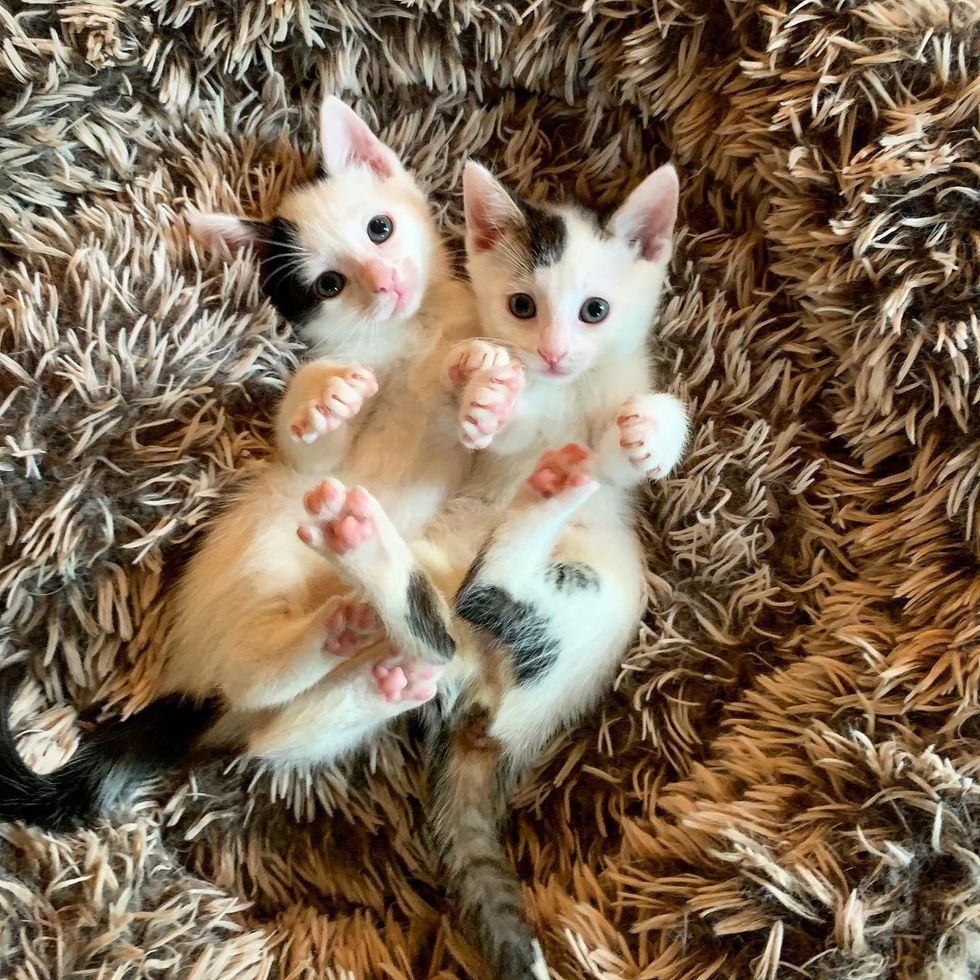 With the help of rescuers and volunteers, these cow kittens were nursed back to health and raised in a home environment, surrounded with love. 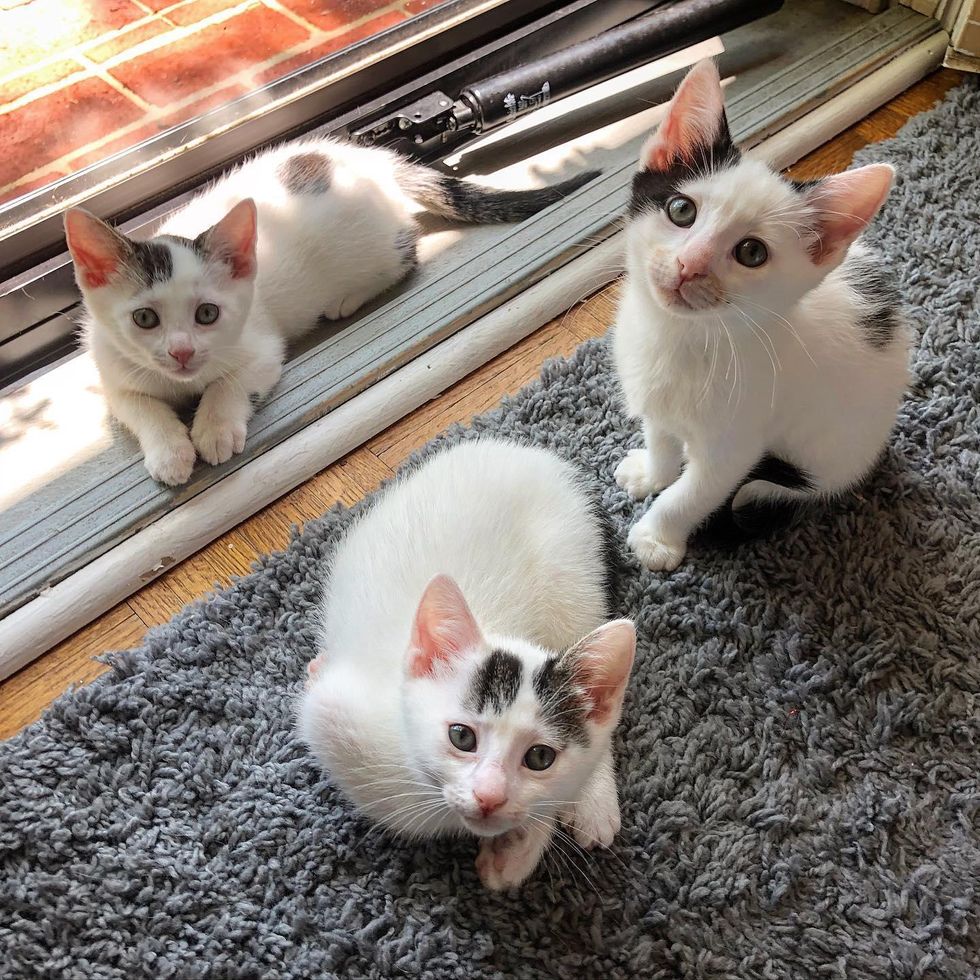 Graham, Mal, Hershey have all been adopted and are living happily ever after with their forever humans. 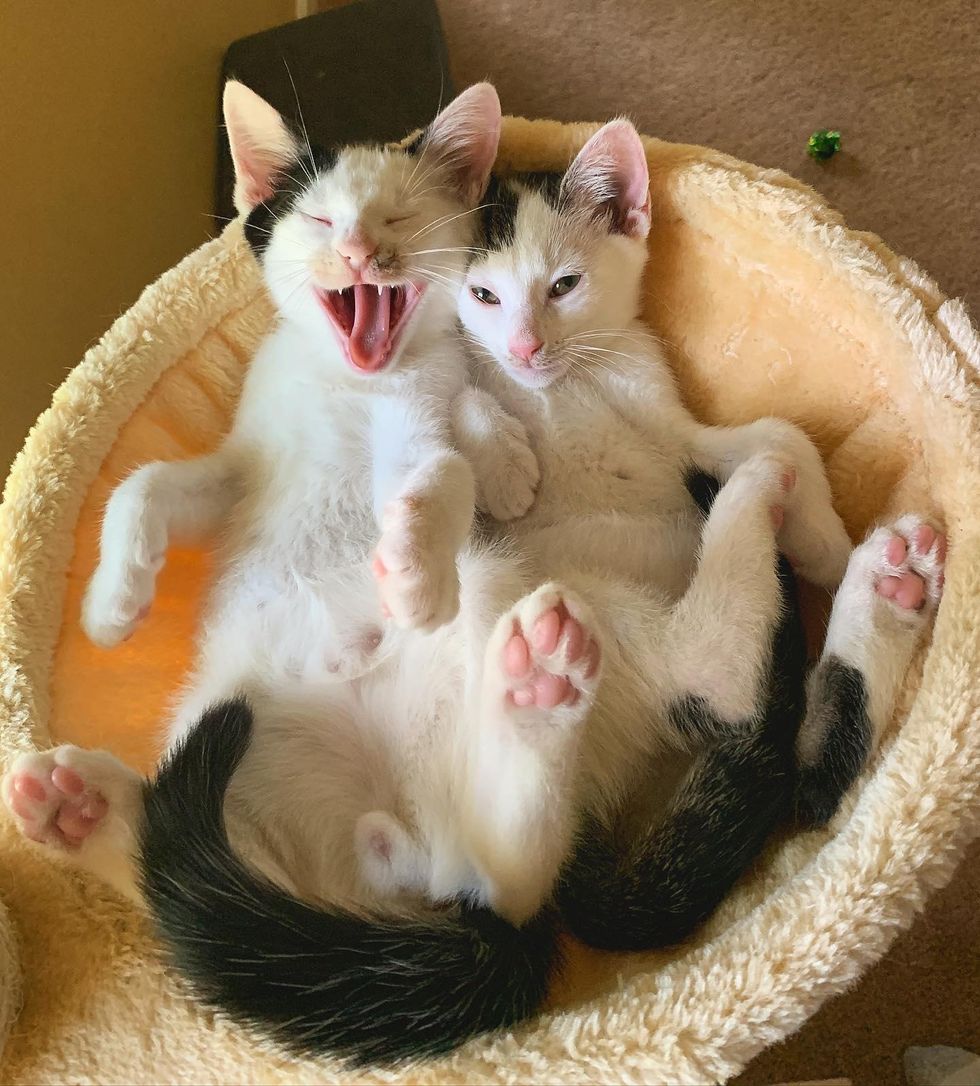 Related story: Kitten with Big Eyes But Half the Size, Clings to Family that Saved His Life and Transforms into Gorgeous Cat