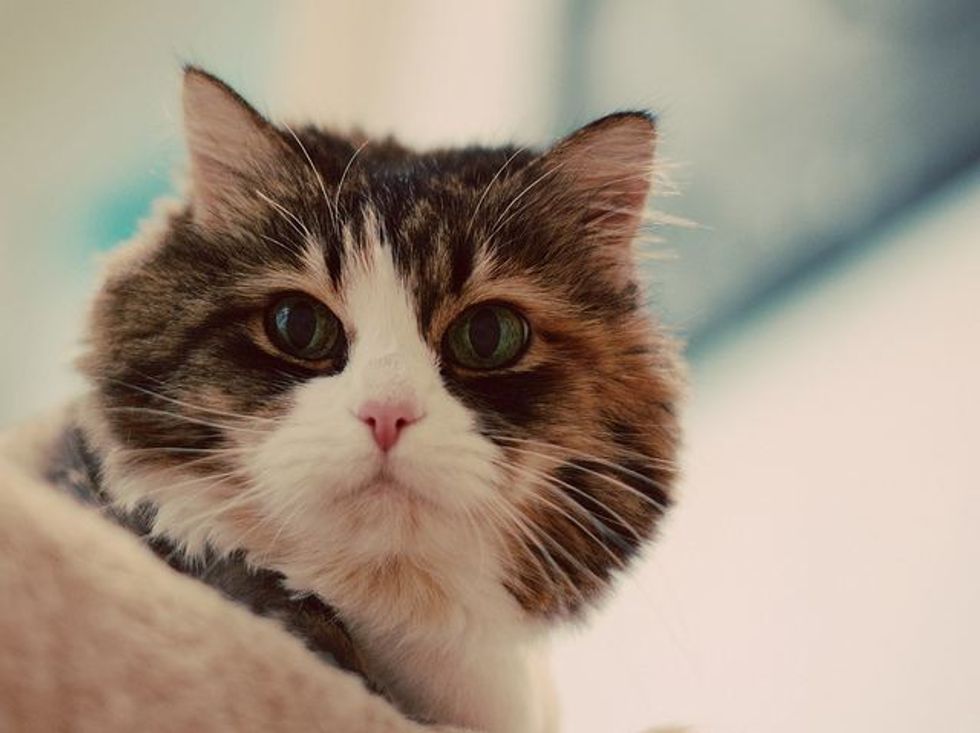 Maizy the Cat, My Soul Mate

I'd always lived in a house full of cats, but I was looking for that one special kitty that would be my feline soul mate. I checked our local humane society for a few weeks, and although I found many cats that I wanted to take home with me, my mom convinced me to wait for a kitten. She knew it would be easier to integrate a kitten into the household that currently had two adult cats. So one day, there she was. she was in a litter with two other kittens. As soon as I scooped up that little ball of fur she started purring, and I knew that was it. She had chosen me as much as I had chosen her. She purred the entire time we checked out, and the entire car ride home. There was never any anxiety from her – I think she knew that she was right where she was supposed to be.

So we brought home this tiny, lanky kitten, and she became the ball of sass that united all of the other creatures in the house. The two adult cats that already lived there did not get along, but maizy was friends with everyone. They both taught her all the cat skills she needed, and she reminded them how fun it is to have a kitten around. We got to see their playful sides again and it was a wonderful environment for all of our animals.

I've neglected to mention how strongly Beepy and I bonded (we actually call her Beepy, because of the adorable chirping/beeping sound she makes when she talks to us). From the start she was mine and I was hers. She was attached to me, always with me. When I came home from school she'd run up to greet me, and if I was ever away she became quite depressed. Eventually I got married and moved to be with my husband, who was in the Army.

She's had quite a few hardships; she was diagnosed with hypothyroidism and had to receive radiocat treatment. A couple years ago she became diabetic. She was in the emergency hospital for a week again, and was back home with a feeding tube for almost a month before she made a full recovery. She's still diabetic now and gets insulin twice a day, but she is doing well.

One of the reasons why I love Maizy so much is because of her strength and bravery at facing all of these adversities. She has left me in awe at her ability to overcome such challenges, and she is always more concerned about me than anything else. If she sees me crying she waddles over to me, feeding tube coming out, and gives me head nudges and beeps to make sure I'm okay. I don’t think anyone but cat lovers would understand this, or wouldn't roll their eyes when they hear this, but I've learned how to be a stronger person because of her.

She is such a loving creature to those in her circle of family. She loves to be carried on a shoulder, but only by me or my sister. If anyone else tries to pick her up she'll make some funny noises in protest. She purrs almost constantly, and loves to curl up on a lap.

I also love her because of her fierceness. She talks to us all the time – if she wants something, she is going to let you know until she gets it. We live in a three story house, and if she wants to go upstairs she will beg for a shoulder ride. She's feisty and loves to play; some of her favorite things sun beams, being held by her designated carriers (me and my sister), yapping, wrapping paper, anything wicker, caving in boxes/bags, and luring you to her food bowl so you can pet her while she eats.

My husband, Marc, had the following to say about her:

"Beeper and I didn't get along at first. We regarded each other as competition for Brook’s attention back when we were dating in high school. I would walk into the room, and Beepy would jump off the bed and scuttle off, with her tail up, annoyed that she couldn't have Brook all to herself.

Over the years what was once contempt between us has melted into mutual affection. Although at times she looks at me as if I am just a big, furless, mentally challenged cat when it is clear to her that I don't understand her demanding yaps mean I must immediately open the back door so she can explore the spot of sun on the deck."

so, again, I know this is way too much, but I can't help rambling on and on about her. I think the photos really say it all anyway - she's sweet, adorable, and loving. and i'm so lucky to have her.