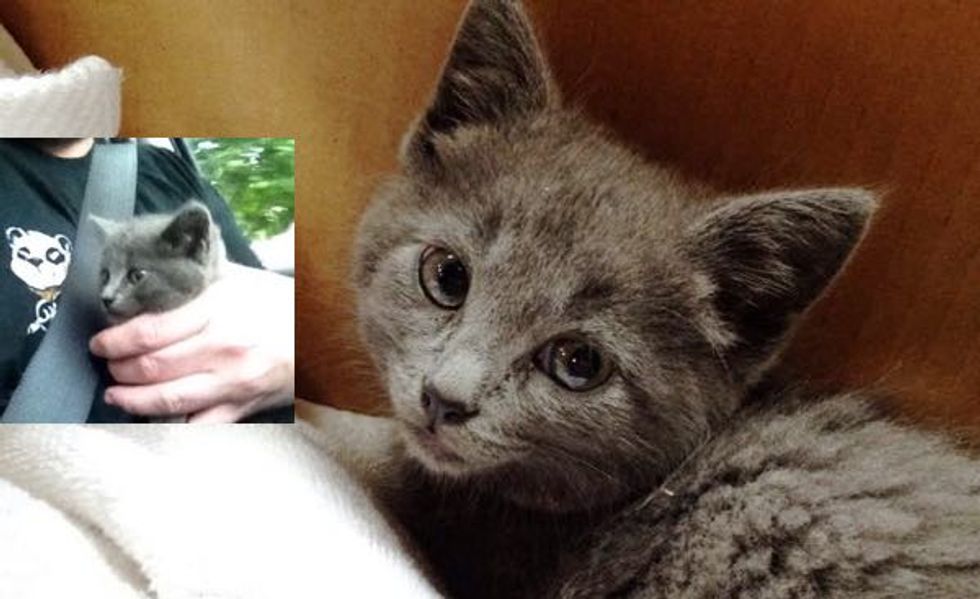 A man stopped the traffic to save a tiny kitten that was trying to cross a busy road. He ran across three lanes of traffic to get her.

This tiny gray kitten was trying to cross a four-lane busy road at rush hour. "(I) saw traffic stopping then driving crazy to avoid something. Saw movement on ground. Was a tiny (TINY) kitten, scared out of its mind, trailing something bright pink..." reddit user GubGeek wrote.

"Threw my car into park and got out, blocking traffic and ran over. Scooped it up and came back to car."

"Inspecting, it wasn't as I'd feared, her tail was stripped of fur, but other than that, she seemed okay. Called vet and told what had happened (shaking because I was so angry at the other humans who'd just kept driving past this tiny helpless terrified animal), and that I'd be there in 15 minutes," he wrote via reddit.

"After inspection, nothing looks broken. Doc thinks that her tail was run over and her attempts to escape caused the fur to be pulled off. He thinks that she is about 5-6 weeks old."

Snuggling with her rescuer.

He brought the little kitten home and gave her some kitten food, and set up fresh water, a litter box, and a nest of blankets and old shirts. "She's slept and eaten and used litter and even batted at my fingers when I was playing," he added.

She's got her energy back!

"She's eaten like a pig and even drunk some water, which makes me happy.

And, she curled up next to me on the blanket and shirts I laid down for her, and napped for about an hour and occasionally would purr and head-butt my hand as I petted her."

"She really is a beauty, and her personality as she settles in is really coming to the fore."

"Part of me thinks that we can be judged by how we treat animals in need (and that part is STILL angry at all those drivers who just honked their horns and drove around her... like she's going to know what a horn blare means?!), and part of me is just glad I was in the right place at the right time to help."

Update: She's all grown up now!

"Shahrazad is definitely the queen of the house, and though she's likely not going to be very big, her personality more than makes up for anything else."