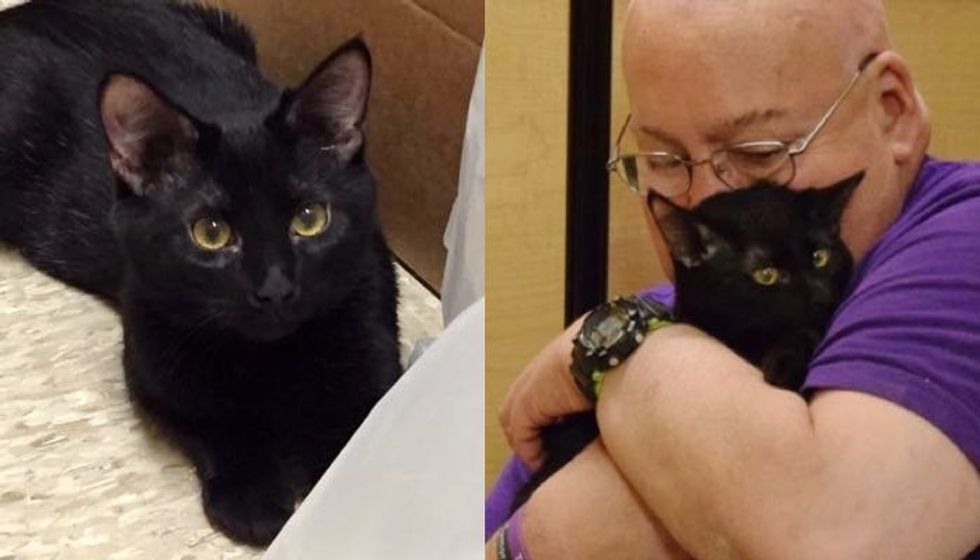 A rescue cat saved a man's life just days after he adopted him from the shelter.

Schallman has a rare brain condition that causes seizures. They can happen in his sleep which can stop him from breathing.

Blake, a rescue cat, had no idea about this before their paths ever crossed.

After moving and settling down in Fort Worth, Texas, Schallman knew he had to have a cat back into his life.

"I went to the Humane Society of North Texas, there was this beautiful cute little fur ball, meowing and meowing, jumping up and down in a cage and wouldn't stop," he told Love Meow.

"I went up to him and he went up to me. I walked this way, and he followed. I go, 'Ok, I gotta have him.' I asked to take him out. He sat on my lap, calmed down and started purring and gave me a kiss on my forehead. I go, 'You are mine!'"

Blake is a rescue cat.

"At 8 weeks old, he and some others were rescued from a woman. He was close to death," Schallman told Love Meow.

Schallman brought Blake home on January 15th, and that day, the kitty returned the favor for saving his life. "I saved him and he saved me."

"On the first day, I had a small seizure, he tapped me on my arm, saying 'daddy you are going to be ok.' On the third day, I had a full blown seizure while I was sleeping, he was biting my toes to wake me up."

If Blake hadn’t bitten him, Schallman said he probably wouldn't have woken up.

Blake has this uncanny ability to sense a seizure coming and alerts his human to lay down to the ground.

"He's my boy. He's an angel from God. He understands me, kisses me a lot and follows me around. He's just great!

"It was meant to be," Schallman told Love Meow.