A man rescued a tiny stray kitten from a tough situation and came back to make her dream come true. 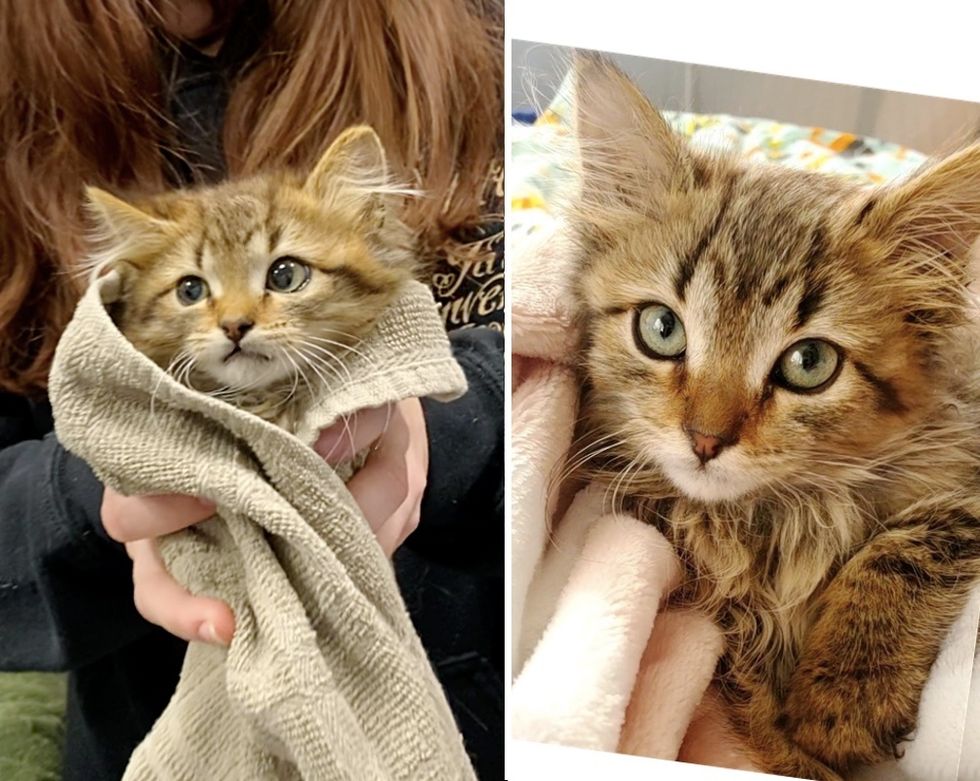 A man was at a tire shop in Commerce City, Colorado on Oct. 26, when he heard a kitten's cries coming from a parked truck nearby. The weather was piercingly cold at 19-degrees (Fahrenheit).

As he traced the sound of distress, he was surprised to discover a tabby kitten stuck to the side of a tire from the semi-trailer. The little stray must have tried to seek warmth from the harsh weather and found herself trapped in a difficult situation.

Her paws were frozen to the metal side of the tire and she was struggling to free herself. The man sprang into action and began to find a way to safely remove the kitten from the predicament.

"The first step was figuring out how to free the kitten's paws and tail without causing her additional pain and suffering," Dumb Friends League, a non-profit animal welfare organization in Colorado, shared with Love Meow. 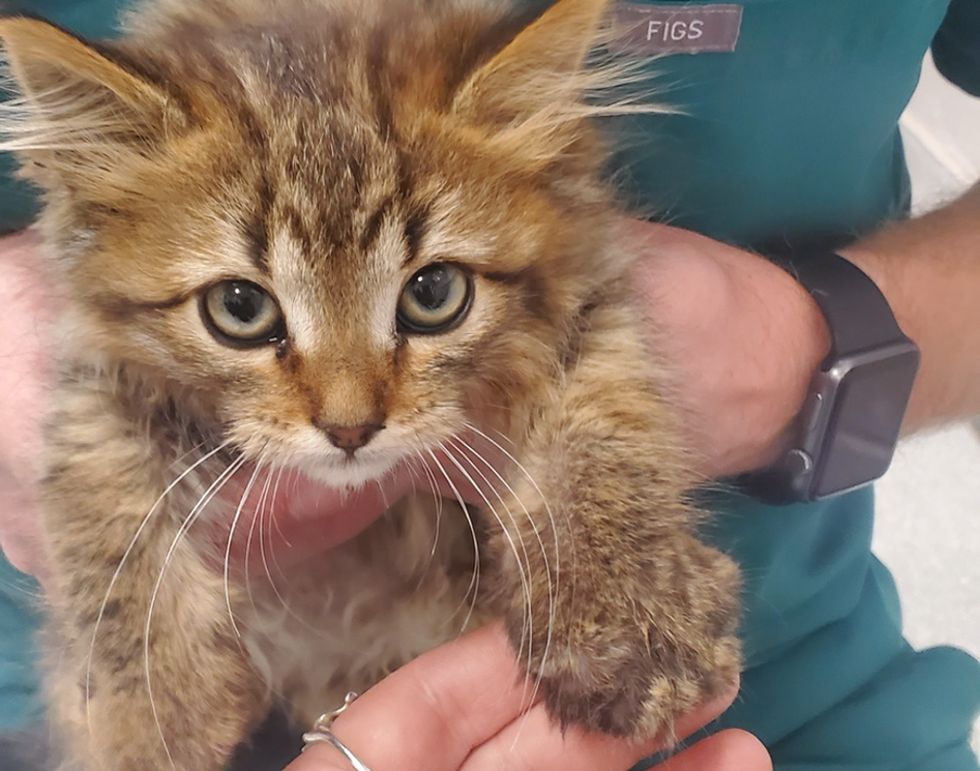 He carefully made his way under the semi-trailer and gently applied warm water to the kitten's paws and tail to help detach them from the metal surface. After nearly half an hour of warming and drying, he successfully got the kitten unstuck and wrapped her up with a blanket to keep her warm.

The kind-hearted man brought the rescued kitten to Dumb Friends League, so the little tabby could get the medical attention and care that she desperately needed. 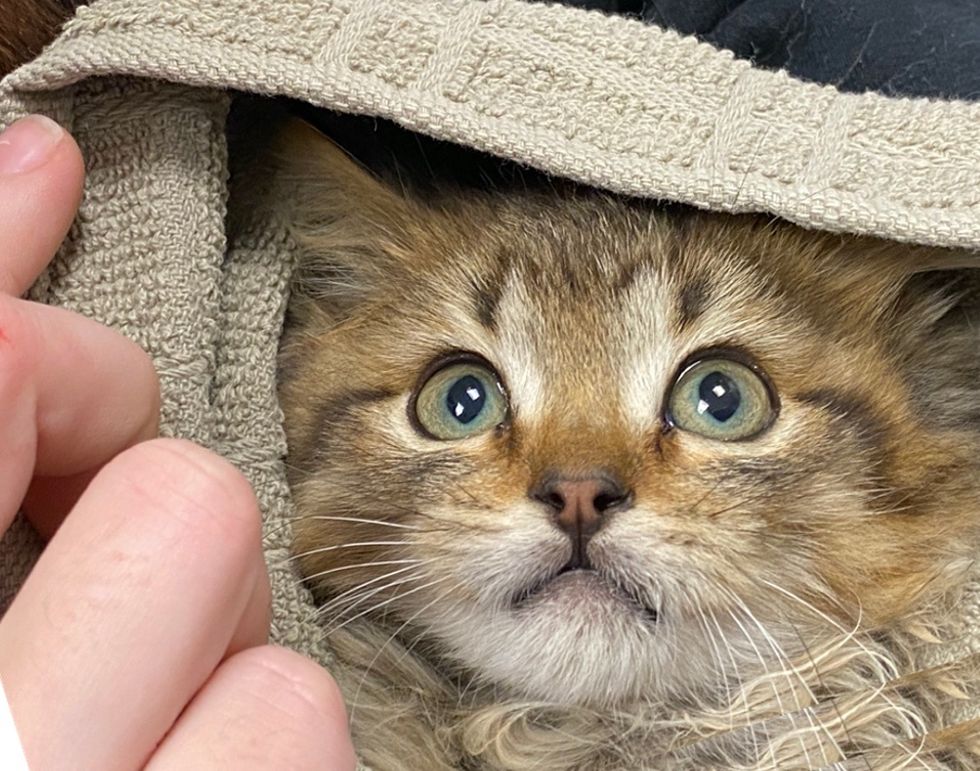 Against all odds, the kitten made it through the incredible ordeal. She was freezing and shaking, but eventually calmed down knowing she was in good hands.

"Upon examination, staff discovered that she had some swelling and pain in her front paws, particularly on her left front leg," the League shared with Love Meow.

The kitten was glad to receive the much-needed attention from the veterinary staff, and was happy to be warm and have food in her belly. 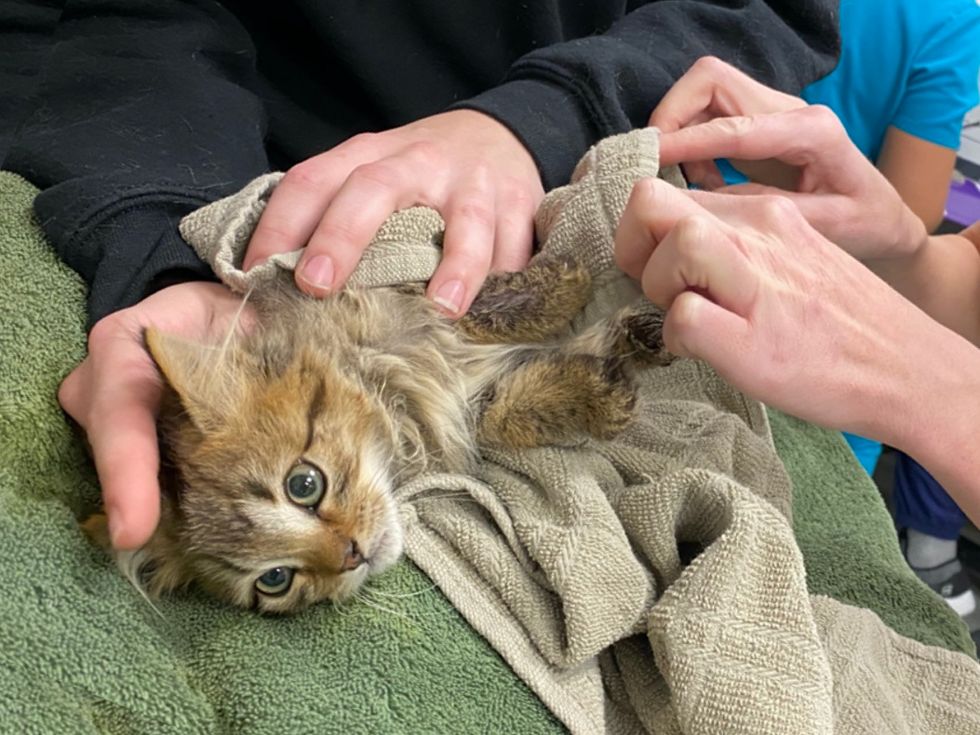 She felt so much better after being treated with pain medication, and cozied up to a volunteer for some TLC. The team continued to monitor her progress until she was well enough to go to a foster home to continue her recovery.

The man who rescued the kitten, never stopped thinking about her. He fell head over heels for the little fighter from the moment that he held her in his arms. 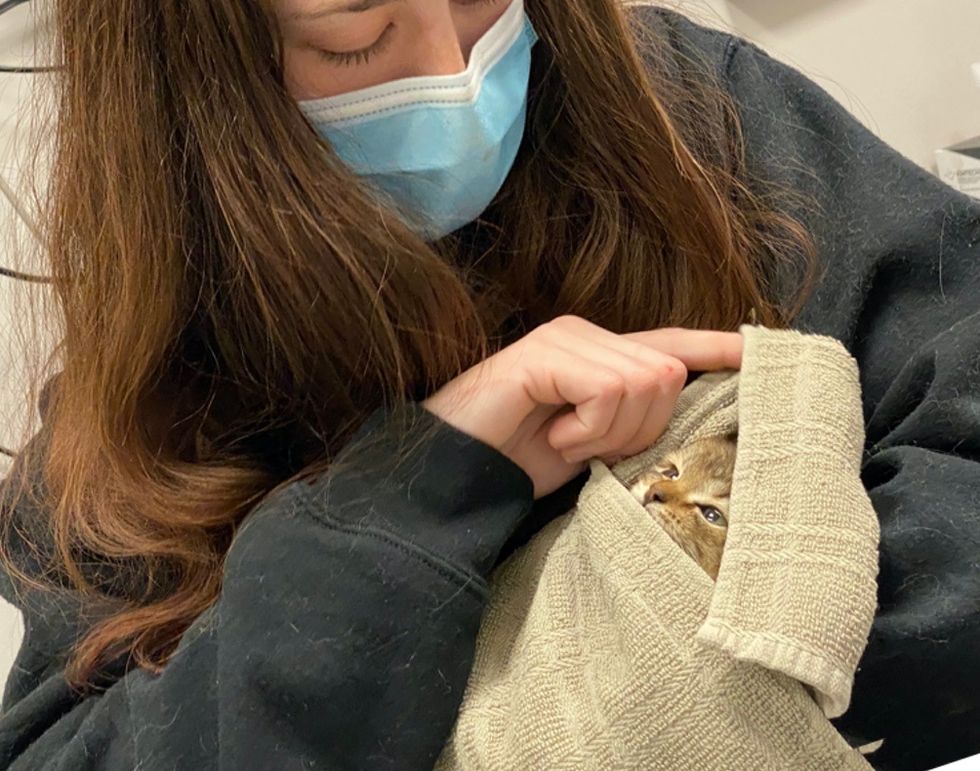 Watch the sweet kitten in this video:

"It's unlikely the kitten would have survived the night without intervention from the compassionate stranger," the League added.

Over the next few day in foster care, the kitten, Xerxes named after a Grecian king, healed up nicely and the worries in her eyes faded away. 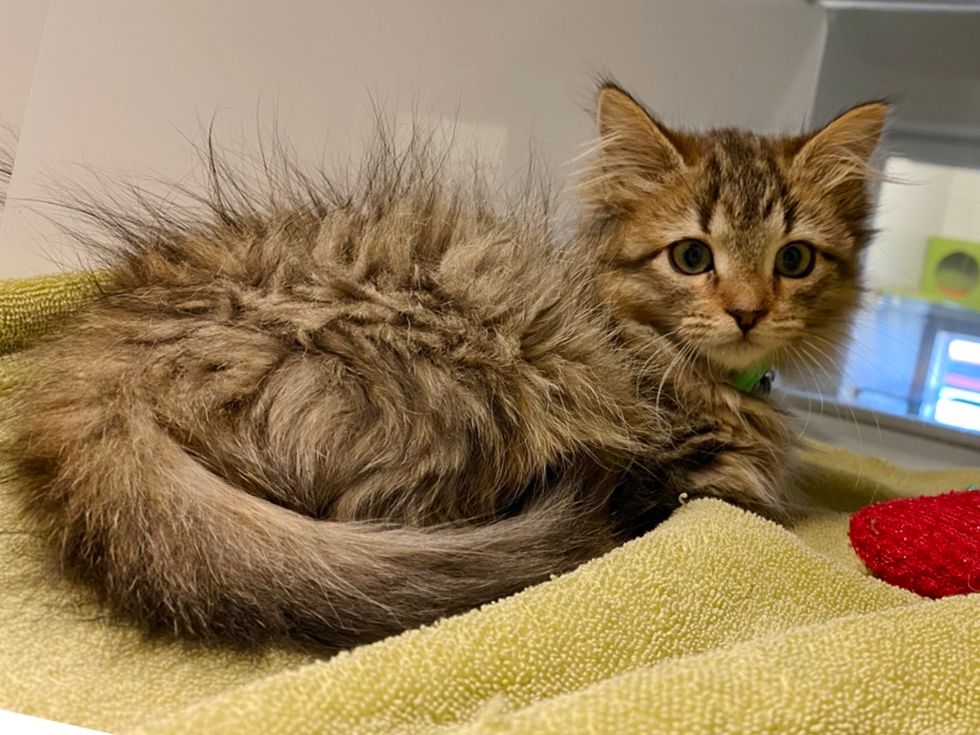 She quickly blossomed into a lovable, playful tabby girl and would switch on her purr motor when she was petted.

When it came time to find her forever home, the rescue knew that someone had been anticipating the day of her full recovery, and was well ready to make her dream come true. 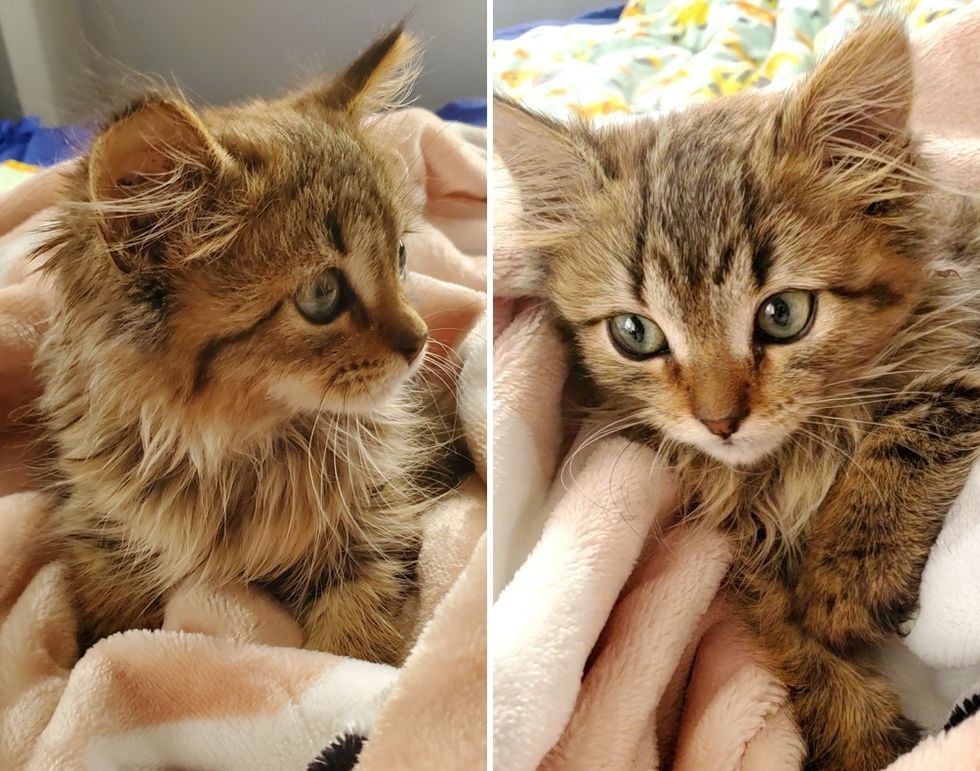 "It was one person's heart who she captured the most, that of her rescuer," the League said. "She was reunited with the man who saved her life."

A few days ago, the compassionate individual who rescued the kitten on that bitterly cold day, picked her up from the shelter and officially made her a permanent part of his family. 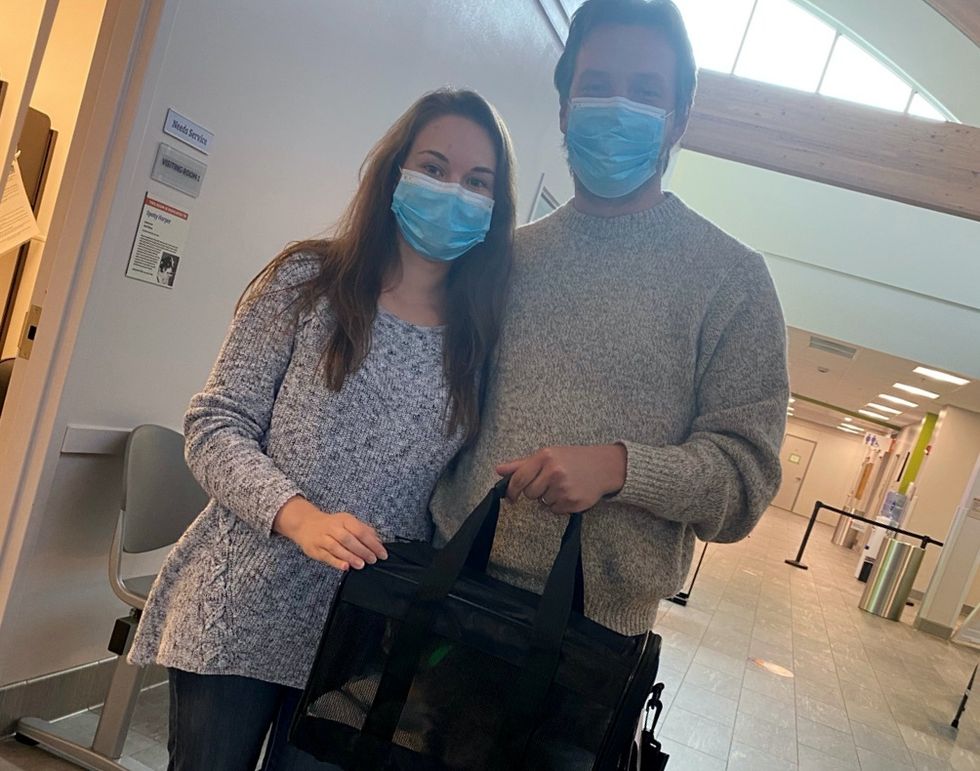 The little tabby will never have to worry another day on the streets. She is loving her new life as a spoiled, indoor cat. 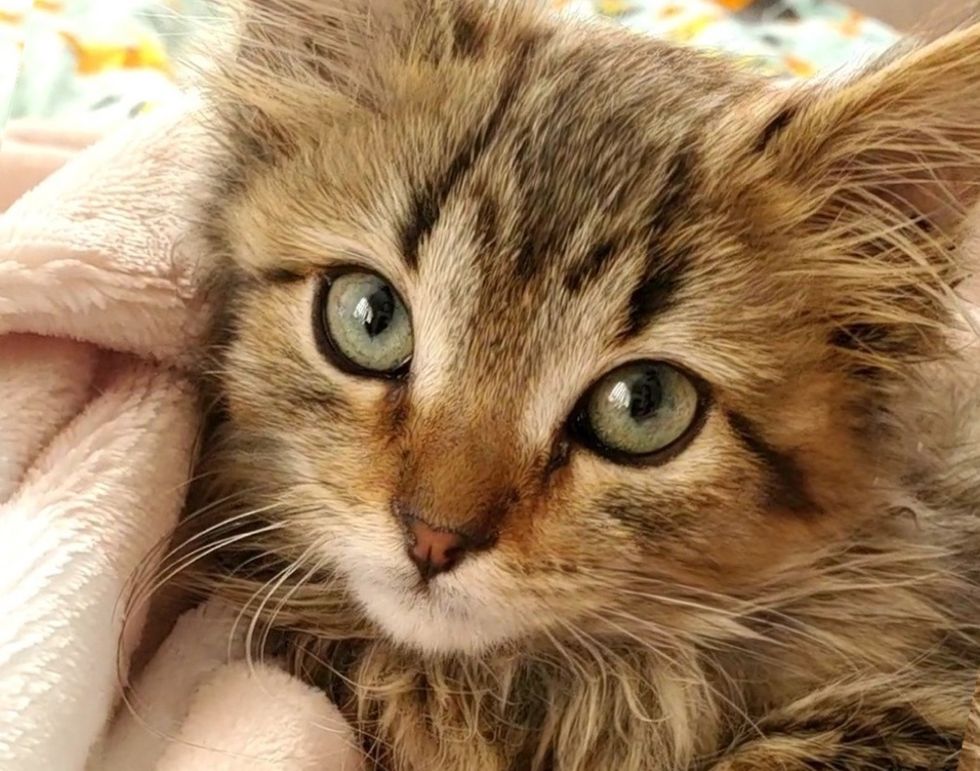