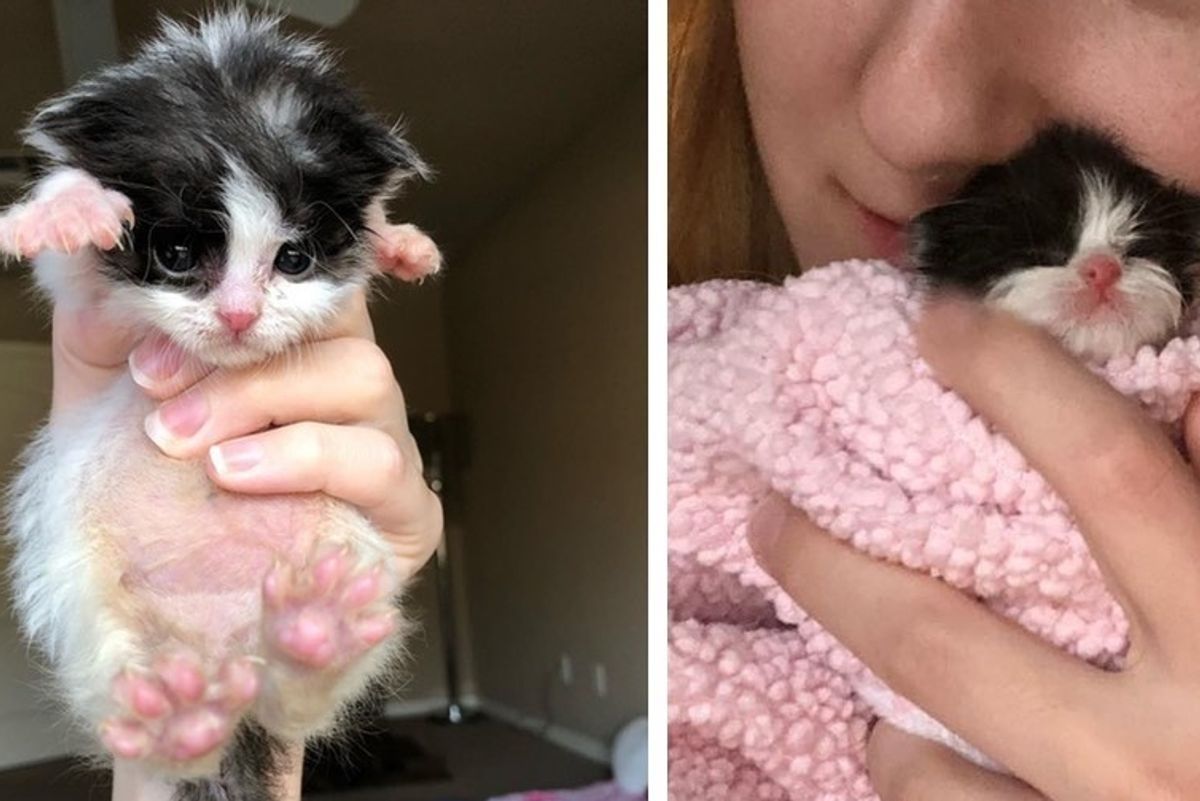 Motherless Kitten, Half the Size For His Age, Has a Big Appetite and Strong Will to Live.

A scrawny little kitten was found outside along with his deceased sibling, without their mother in sight. A kind-hearted woman took him in and reached out to a local rescue group for help.

Three weeks ago, Mety was found outside, struggling to stay alive. The woman that saved him, took him to Rescuing Animals in Need (RAIN), a volunteer-based rescue group in Chandler, Arizona.

When Melinda Blain, an avid foster carer, picked up the little guy, she realized just how tiny he was. "He was one week old when he came to me, but the same weight as a newborn or one day old kitten," Melinda told Love Meow.

As soon as Mety was held, he tried to nuzzle in the crook of his carer's neck, snuggle up on her chest or burrow in her hair. All he wanted was pets and kisses.

"Mety was so malnourished, and he was found with his sibling who had already passed away. He's been a pretty quiet baby since the beginning. He is mellow and only gets noisy when he hears me getting his bottle ready," Melinda told Love Meow.

The little "cow" kitten weighed just 100 grams - much smaller than his age - but he had a strong appetite. In just 24 hours, he put on 20 grams.

"He already upped his weight by 20 percent in just a day, and he loves his kitten milk. He's such a sweetheart and purrs for after-meal cuddles."

The tiny kitten has a tremendous fight to live.

"He has always been a strong eater and has quickly become a chunky baby who loves his bottle. It always worries me when I get babies that young that are underweight and malnourished, but he is such a fighter and the sweetest little guy," Melinda told Love Meow.

Kneady kitty snuggling with his foster mom after dinner.

As soon as Mety figured out how to use his little legs, he began to explore and started to become playful and more aware of his surroundings. He would perk up when he heard his foster mom talking to him.

"Mety is so calm at bath time and loves after-bath purrito snuggles."

"He started walking successfully in the past week. He always waddles since he has a chunky belly," Melinda told Love Meow.

"He falls over occasionally, but he's becoming more and more coordinated!" (Scroll down for video)

Mety loves to chat with his human friends.

Now bigger and more curious, after every meal, he likes to take a walk and do a bit of exploring, and then fall asleep purring in his foster mom's lap.

"The little guy gets cuter every day! He's going to move to a playpen this week so that he can have more space to explore. He still just loves to hang out in my lap and soak up the love," Melinda told Love Meow.

Mety has the cutest milk belly and pawsome hair!

In just three weeks, Mety has learned to eat from a bottle, walk and waddle, play like a kitten and use the litter box all by himself.

"He's already made such tremendous progress and has been such a little healthy baby with a strong spirit!"

Melinda Blain on Instagram: “This little cutie is getting moved to his playpen tomorrow which means he’ll get introduced to his first toys and have plenty of space to…”