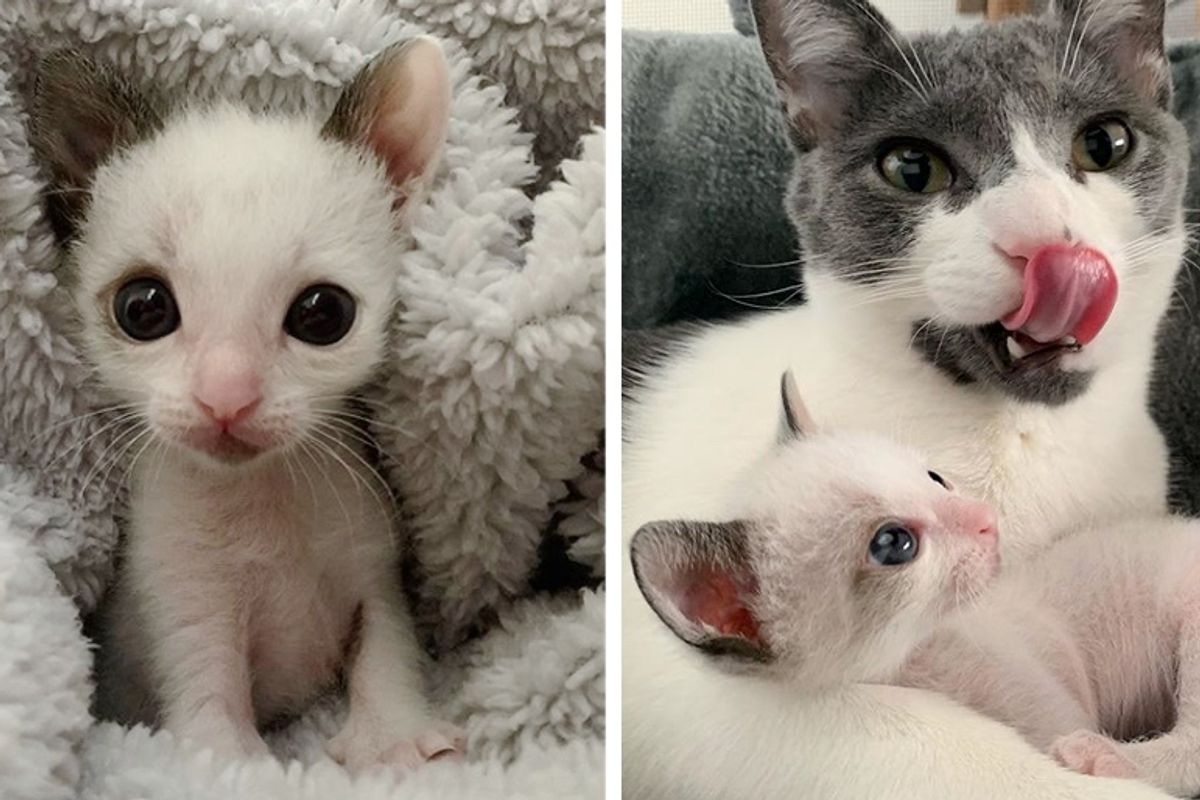 A palm-sized kitten who was rejected by his mom, found a new family to cuddle.

Beth Walden, an animal rescuer from Florida, took in a palm-sized kitten who needed round-the-clock care. The little one was rejected by his cat mom. At three weeks old, he was only the size of a newborn.

They were surprised by how small he was. "I knew he was a little fighter since he had made it three weeks in the condition he was in," Beth shared with Love Meow.

The kitten was very fragile and had trouble getting food into his belly. Beth fed him kitten formula drop by drop, and overnight, it brought the little guy back from the brink.

She cleaned off the crust covering his eyes and treated him for the infection. They didn't know if his eyes could be salvaged but were trying everything they could to help him heal.

After many sleepless nights, the kitten whom they named Guinness, perked up and started to thrive. His appetite improved as he figured out how to suckle down the formula through a syringe. His belly was full and round.

After every feeding, the kitten would cuddle up to Beth and purr himself to sleep. "He's been strong from the first day I had him," Beth said. "Guinness is definitely a cuddler. He looks like he's smiling while he's sleeping, and tucks his head in and crawls out when he wakes up."

The tiny fighter recovered from the eye infection and revealed his big, gorgeous baby blues. He was still very petite for his age, but tried to play and even learn to walk. Nothing seemed to slow him down.

Before nap time, he enjoys kneading on his soft blankets. "He loves rubbing his face in fluffy blankets. He also loves to make biscuits while he does it," Beth added.

At five weeks old, the kitten was only the size of a two week-old. His body looked tiny compared to those big, blue eyes.

Guinness was born the runt of the litter, but the little guy was determined to grow big and strong.

When the kitten was ready to socialize, Beth introduced him to their resident cat Mr. Tiny Pants. The big kitty quickly took to Guinness and started grooming him. Whenever they hang out now, he makes sure the kitten does not escape his mandatory baths.

Watch Guinness the kitten in this cute video:

The kitten looks up to his feline friend and learns how to cat by intimating everything he does.

Guinness has learned to use the litter box on his own, and figured out how to eat from a dish like a champ. His family is very proud.

As Guinness grew bigger, the markings on his ears and tail started to darken.

"Not only does Guinness have one black spot on a back foot but he also has mixed color beans on each foot," Beth said.

The rambunctious little guy is quite a mischief-maker. He is much smaller than other animals in the house but can hold his own when he wrestles with the big kitty.

After a long day of playing, he comes over to his humans and demands their attention and cuddles.

Guinness is still small for his age, but what he lacks in size, he surely makes up for in personality.