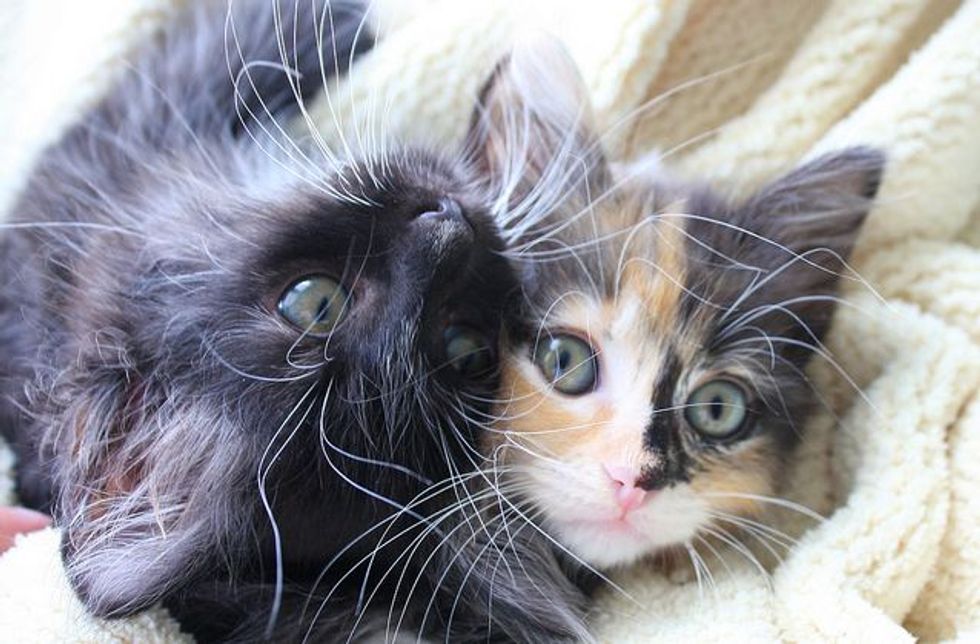 Written by ©Victoria Rittinger (flickr: viva_victoria). Victoria is a volunteer for Houston SPCA and has cared for many rescued kittens.

The Peabody kittens were dropped off at the Houston SPCA by someone with "too many cats". They all had sniffles & sneezes, and needed to gain some weight, but that didn't stop them from immediately coming out of their carrier and exploring the "kitten rehab" spare bedroom.

Amelia, in particular, was very brave and bold, immediately climbing to the top of the scratching post. Their names come from the mystery series by Elizabeth Peters called the Amelia Peabody series; the lead character Amelia is very bold and brave so I had to name the kitten after her! So the rest of them were also named after characters in the books. Radcliffe and Evie were also outgoing, but none were quite as spunky as little Amelia! She was definitely the boss.

Little Wally was the runt and had a tough time getting food from his pushier siblings - I fed him by hand for a while, and then on the table so he wouldn't have to share. I had him about 10 days longer than the others, taking him on a weekend ranch vacation that must have agreed with him, because he ate four cans of kitten food in one day!

Amelia and Radcliffe were adopted by two friends, and their new names are Alba and Bruno (Bruno is finally able to keep up with Alba as he's getting bigger!). Evie was also adopted by a friend-of-a-friend who wasn't even looking for a cat until Evie planted herself in her lap and cuddled with her all day. Wally went back to the Houston SPCA to be adopted, and is hopefully cuddling up in his forever home right now.