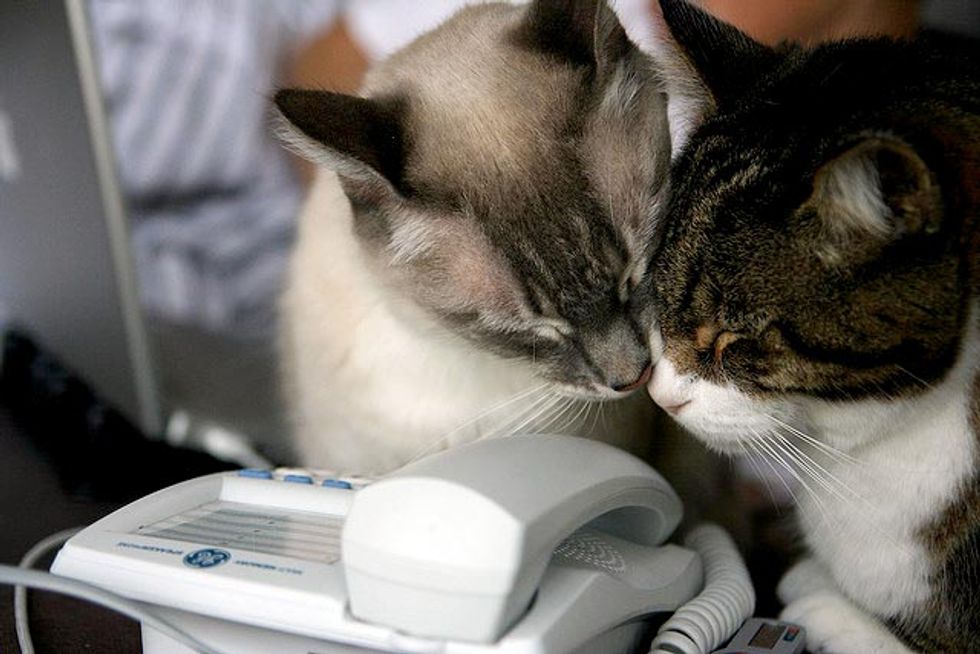 “Which is the friendliest cat,” I asked the vet tech who spent a lot of time with the cats boarded at the vet office that were available for adoption. Her face lit up and she said, “Come with me.” I followed her into a room lined with cages and she opened the one halfway down on the right and pulled out a large brown tabby cat, holding him over her shoulder like a baby. He immediately began sucking on her neck, giving her kisses upon smooches. “Hold him,” she said, and I did, and I never let go.

That was four years ago, and the cat is named Romeo. Romeo is a special guy who happens to love other cats. Whenever we bring another rescue into the house (we now have 4), Romeo is the greeting committee, the welcome wagon, the “mama” of the house, which is how he earned the nickname “Mama.” That, and because when he meows, sometimes he says "Mammmmmaaaaaa." It's pretty adorable.

Mama, I mean Romeo, was especially helpful when we rescued Momo at 4 weeks and he was too young to be without a mother. Romeo became Momo’s surrogate mother, giving him lots of baths and teaching him not to bite people.

Romeo is now about 15 years old, the vet estimates, and has been suffering from kidney failure for the past 7 months. We give him subcutaneous fluids every day to keep him feeling good, and because he has become such a picky eater and eats only fresh canned food, we have a schedule at our house where someone feeds him every 2 to 3 hours, even during the night. We’re doing everything we can to keep him happy and comfortable for as long as possible.

The other day, the mister of the house picked him up and held him over his shoulder like a baby, and Romeo started sucking on his neck, just like he had the day he won us over and he became a part of our family. We are so happy he picked us to be his family.