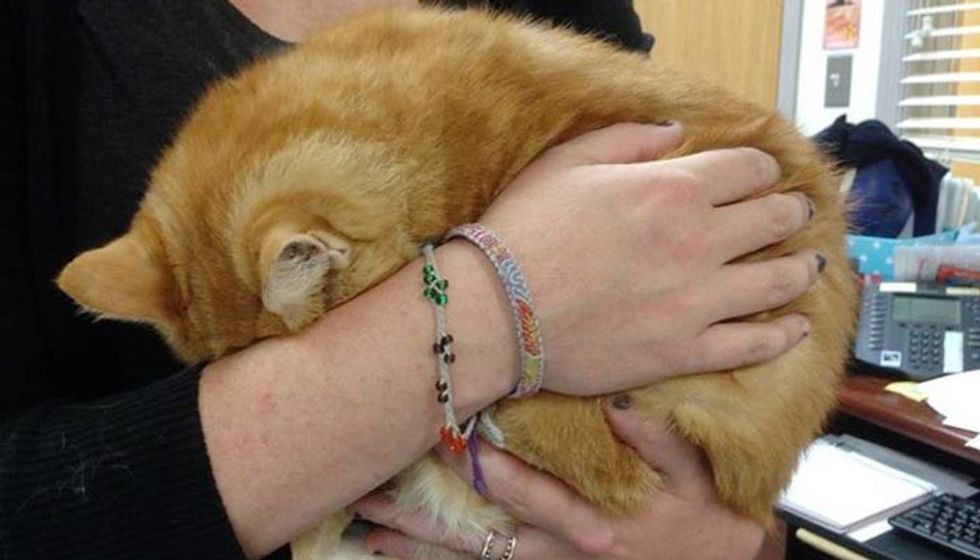 This shelter cat was so scared that she wouldn't even show her face and was too frightened to eat. But everything changed when they found her a foster home.

Backpack the cat was wandering on the street of Philadelphia until she was spotted by a child who tucked the frightened cat into a backpack to try to keep her safe while bringing her to the shelter.

When Backpack arrived at the Philadelphia Animal Welfare Society (PAWS), she did her best to hide herself. Volunteers tried to comfort her, but she curled her body into a ball and buried her head into the volunteer's arm, trying to make herself invisible.

"She is completely terrified and shut-down despite our best attempts to soothe her," PAWS shares Backpack's story on Facebook. "She's too depressed to eat here... Despite feeling so down, she still gratefully accepts petting and head rubs."

After a little coaxing, they finally got Backpack to show her pretty face!

Then Backpack found a foster home!

PAWS shares on Facebook: "In the shelter she was too scared to show her face or even eat, but now that she's in a home she's feeling like herself again!"

Just a few minutes after her arrival at her foster home, she began to open up and started exploring her room, then Backpack went straight to her food bowl for something delicious to eat. It's amazing what a comfortable home can do.

Backpack feeling safe in her new home, no longer hiding herself. You can see the happiness in her eyes.

"Now, she's happily adopted and thriving in her home!"

Share this story with your friends. If you would like to support their rescue effort, you can visit their website www.phillypaws.org/foster or follow them on Facebook. A change of scenery to a loving home environment will make all the difference in the world.