A scrawny shy kitten was found in a parking lot all alone. A kind family took her in and turned her life around. 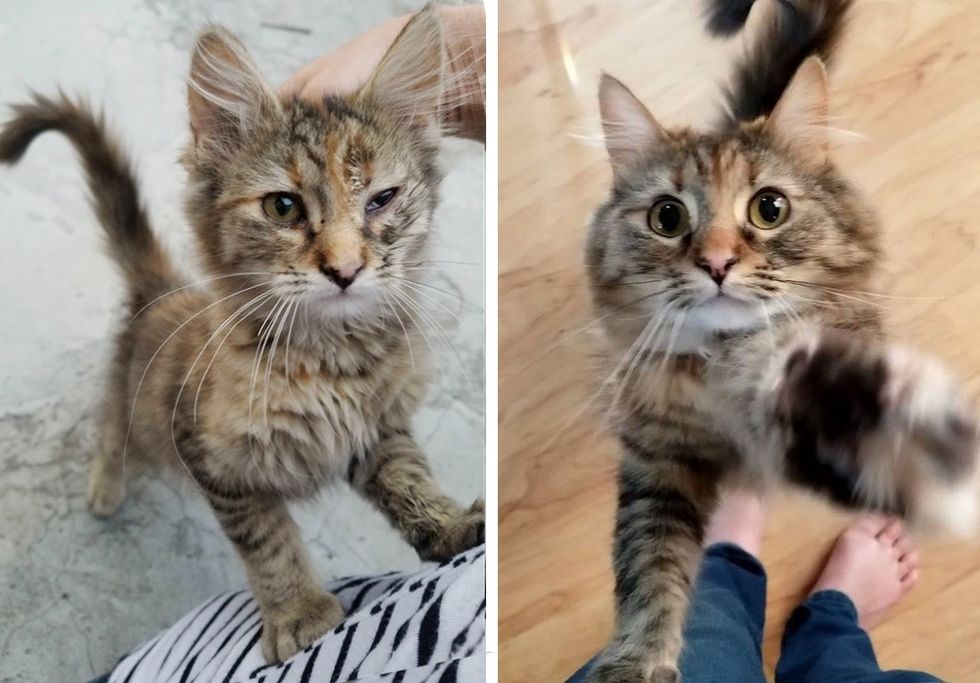 A stray kitten was spotted meowing loudly in a parking lot. Courtney Bailey heard her cries and found her under a street lamp. The torbie was so timid that it took Courtney some time to get close to her.

"When I did she immediately stopped crying and began to purr. You could feel every bone in her tiny body," Courtney shared with Love Meow. "We think she was abandoned and she was so traumatized that she cried all the way through her first meal."

The kitten had an infected eye, an injured leg and was just skin and bones. Courtney brought her home and spent the entire night with her, giving her fluids to help rehydrate her, and feeding her by hand. 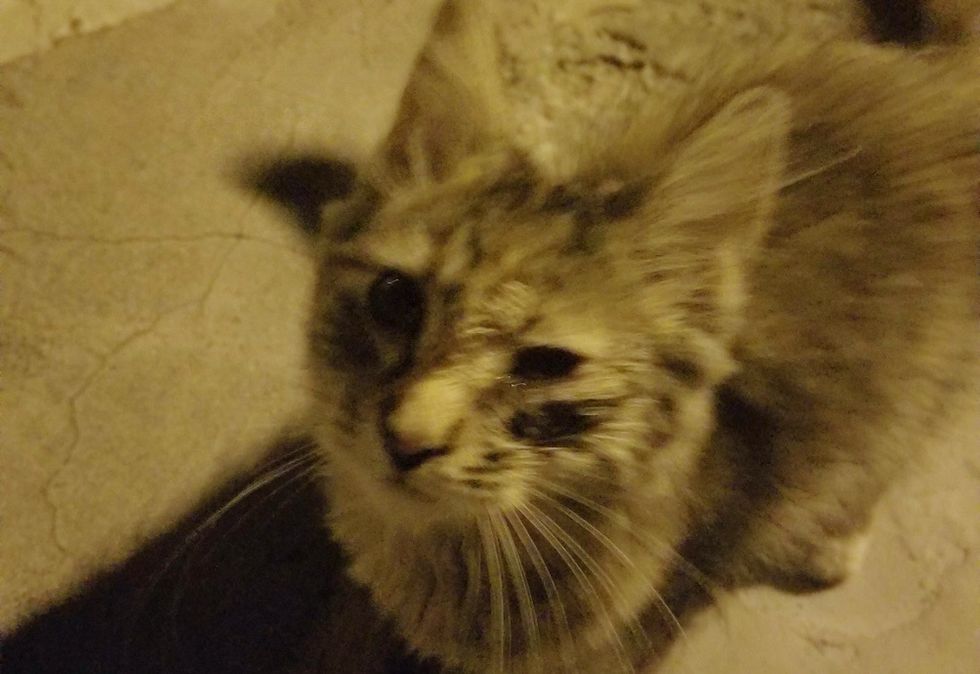 "By the next day, after getting some water into her system and getting some medicine in that eye, she seemed to be feeling a bit better," Courtney said.

The torbie girl (named Reese) was given a much-needed bath to remove all the dirt and grime. It was touch and go for a while, but the kitten didn't give up.

"For a few nights, I thought that I was going to lose her, but she showed me just how strong she really is." 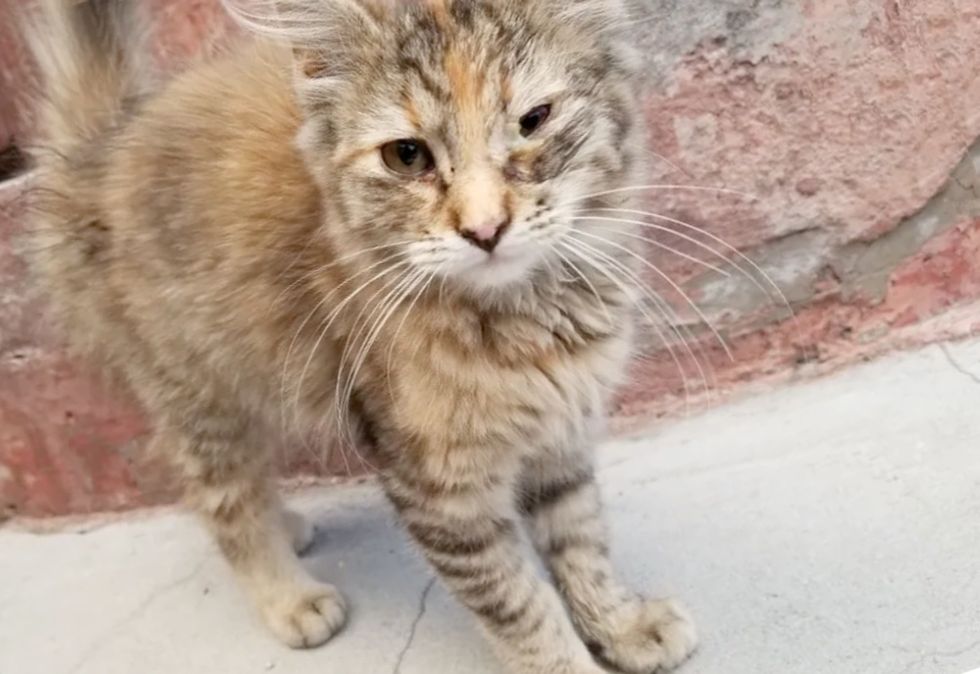 Courtney's presence seemed to have given the kitten a purpose to live. She continued to swallow food despite being very weak, then one day, she got up from her bed and even attempted to walk.

"She wanted to follow me around for the first time in days. She even began to eat on her own again," Courtney said. 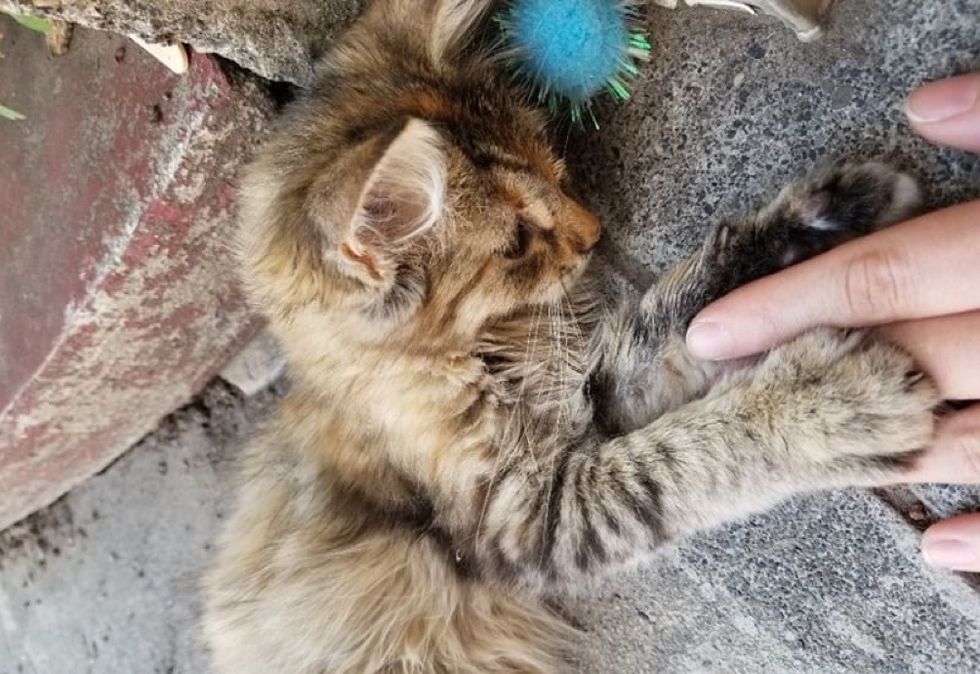 The kitten made strides every day, and her eye and leg healed up nicely. As soon as she got her energy back, she wanted to run and climb. "She began immediately to show me that she is a cat. She was drawn to the keyboard the moment she saw it."

Reese quickly became Courtney's morning buddy, and they developed a cute routine together. 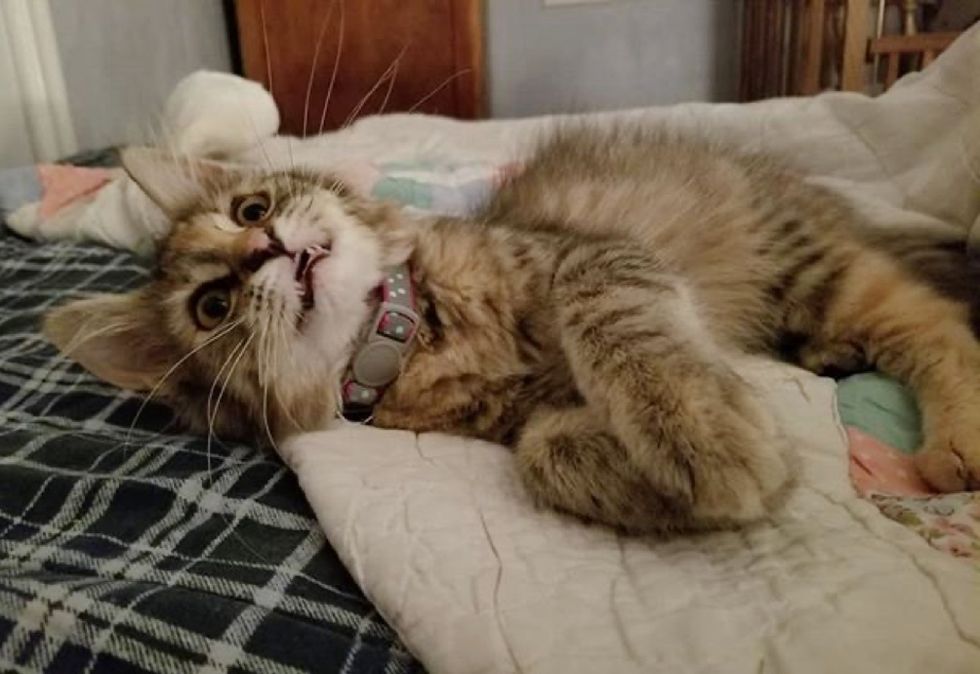 "Every day when I get up, she wakes and stretches with me. She follows me into the bathroom after breakfast to play in the sink while I prepare for my day," Courtney said.

"She learned almost immediately that my alarm meant that it was time to wake up. Now if I ignore it, she insists on waking me herself." 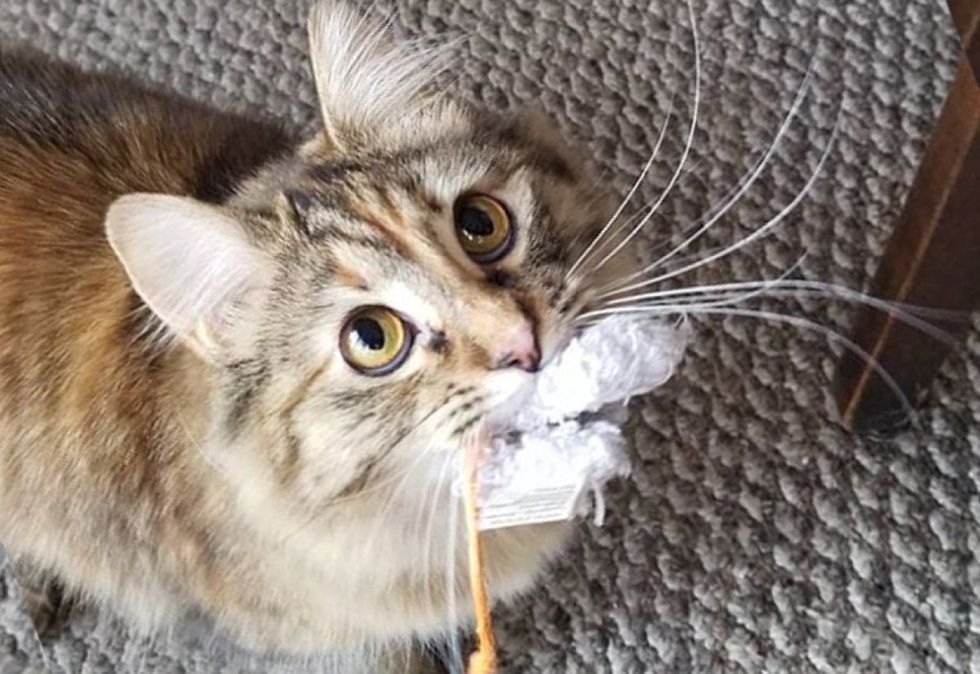 Courtney introduced Reese to the rest of the family. She and the other resident animals instantly connected. Sir the tuxedo cat took to the kitten right away and became quite protective of her.

He started looking after the torbie and wouldn't even let the dog get too close to her. "It was clear that these two would be best friends for life." 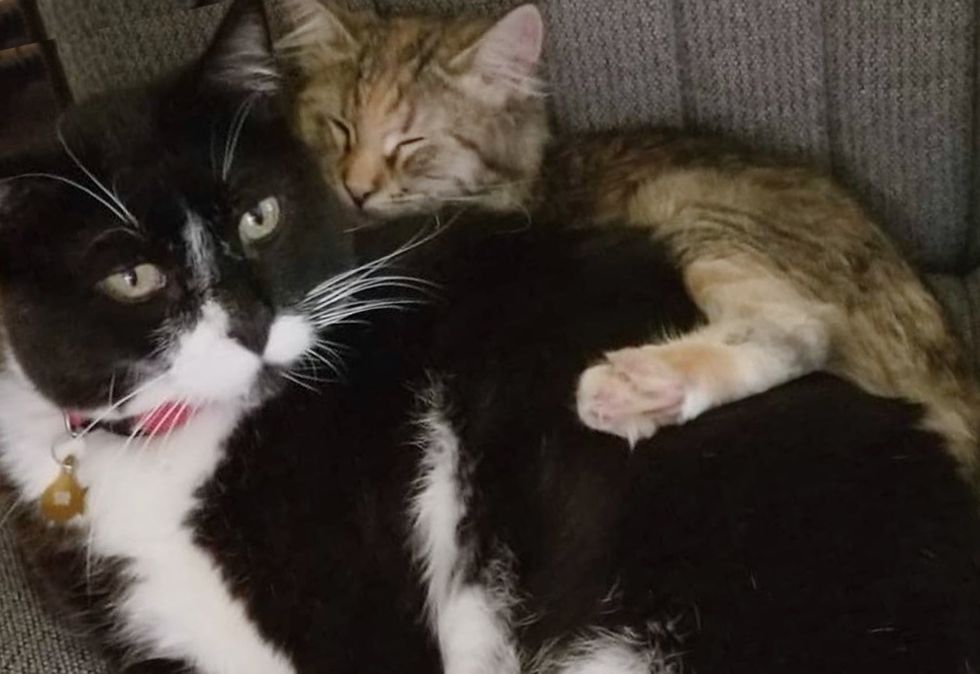 The tuxedo kitty kept the kitten clean and well groomed and watched over her every step of the way as she grew into a gorgeous, fluffy cat. 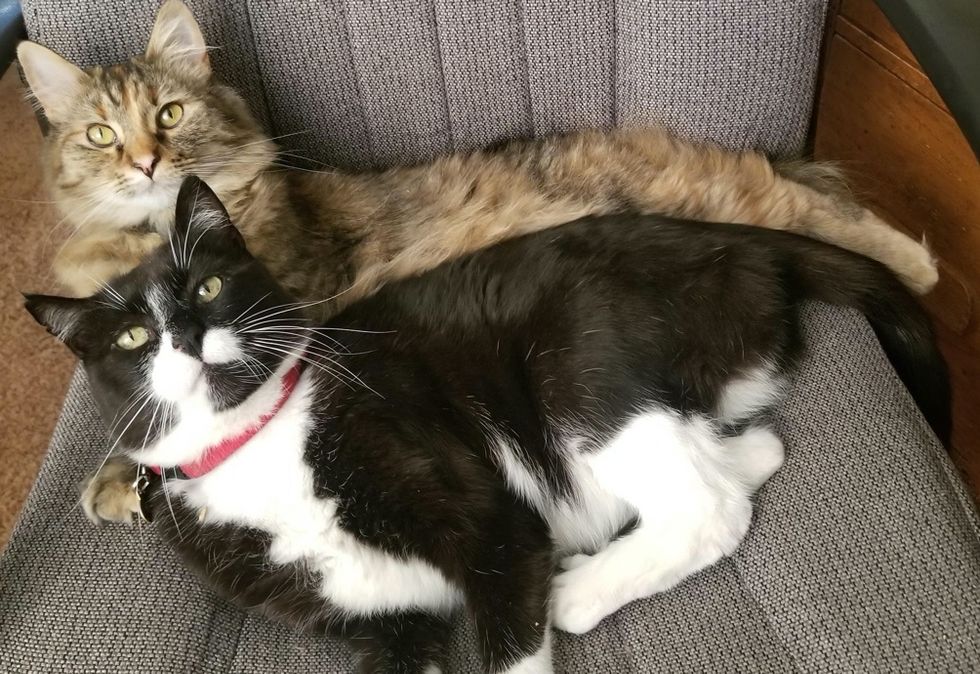 Reese was not much of a jumper due to her old injury. As she grew into an adult cat, her mobility also improved.

"The first time she made a 'real' jump, we cheered even though she fell flat on her bum! To this day she is still quite clumsy, but is getting to the point that she can make some large, graceful leaps like a regular cat." 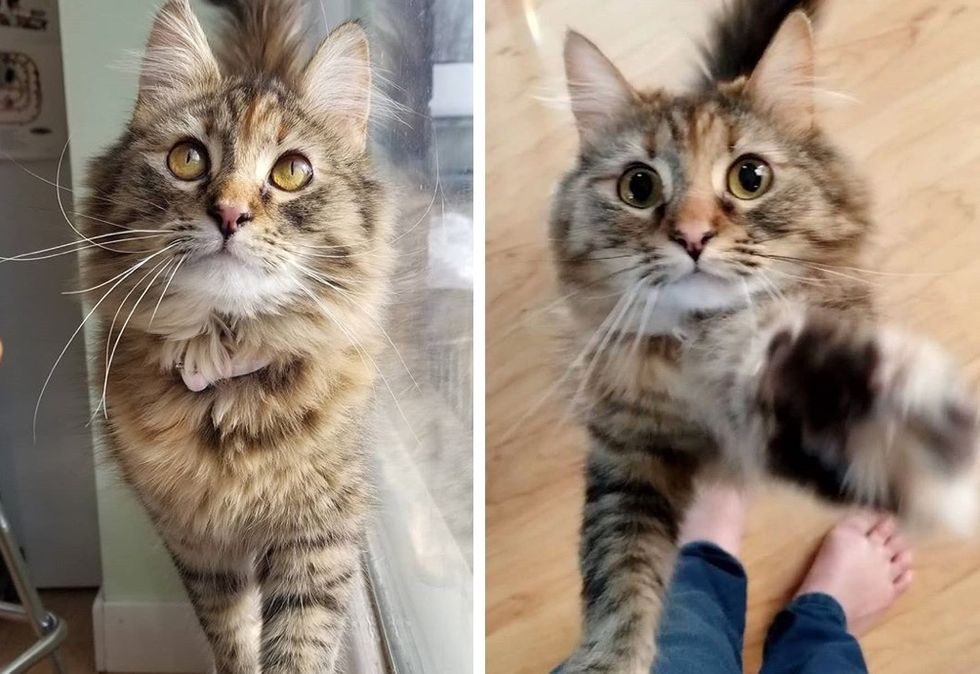 "She is so full of personality. She loves to have her belly vacuumed, and she sits on her behind like a person to watch TV," Courtney told Love Meow.

"She is obsessed with fetching toys and watching toilets flush and will even try to pry you off of the toilet to see, if you don't get up fast enough." 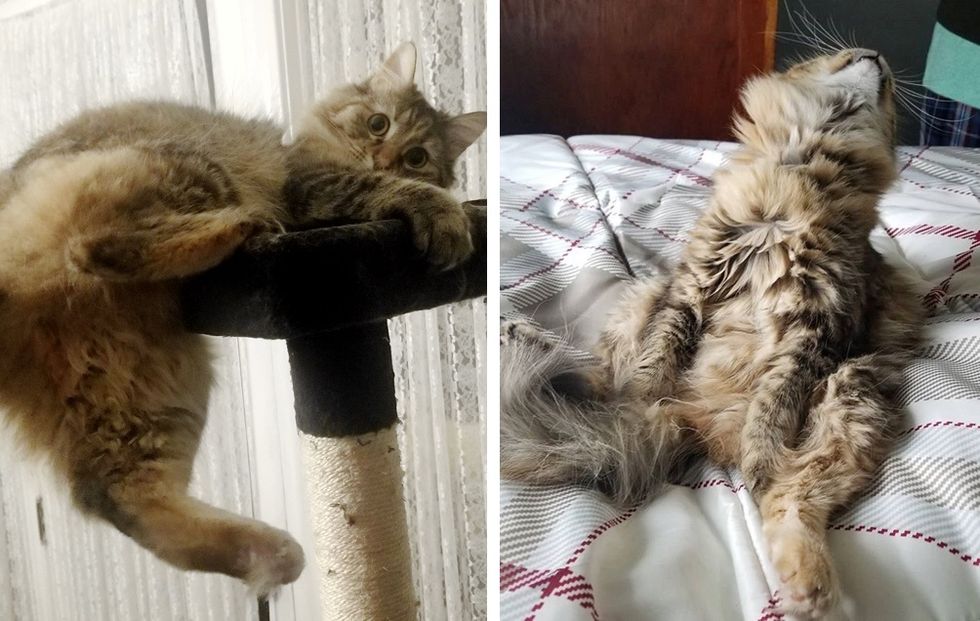 "No one thought she was going to make it, but one day she just started following me. She's been following me ever since."

The fluff on her tail has grown back to its original glory, and she likes to show it off with pride. 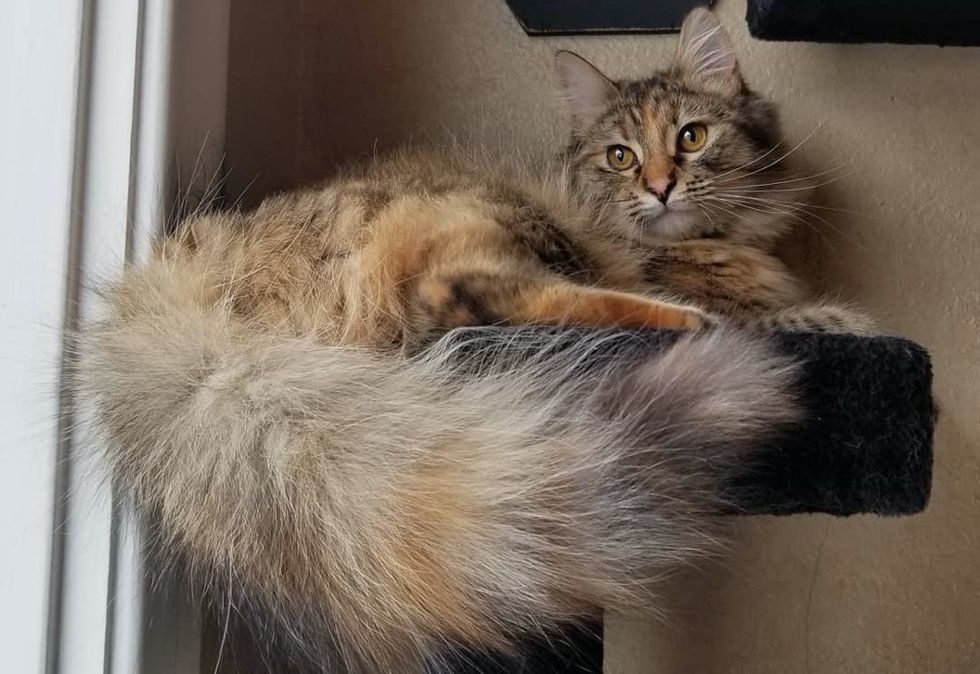 "She turned into the silliest, sweetest cat ever. She flops in your arms like a beanbag, purring away. Everyone who meets her, falls absolutely in love with her," Courtney said.

"Reese is a joy to have around all the time. I can't imagine life without my silly girl." 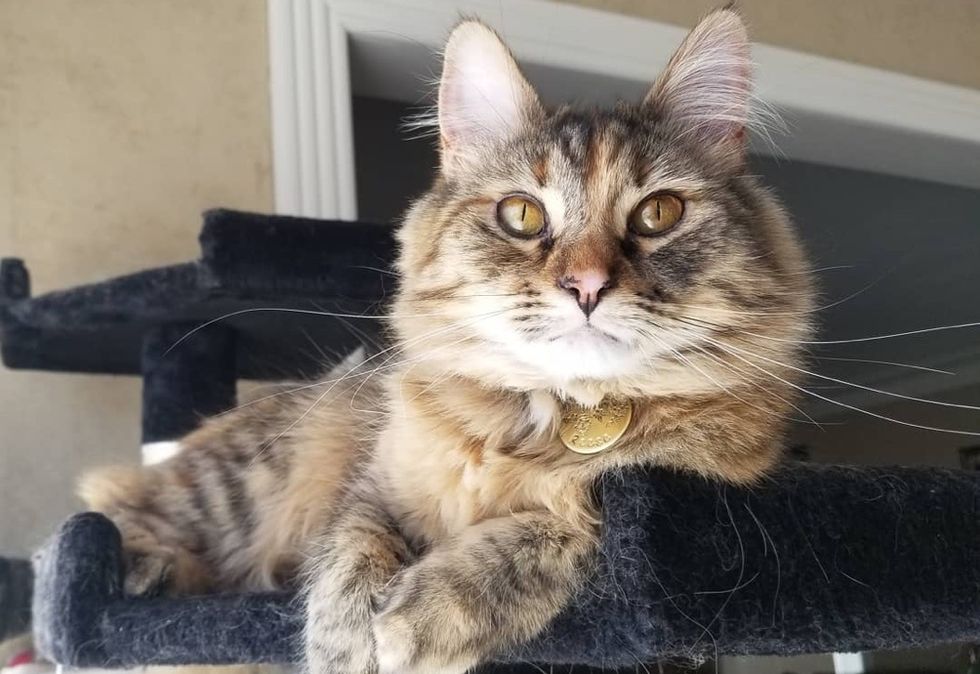