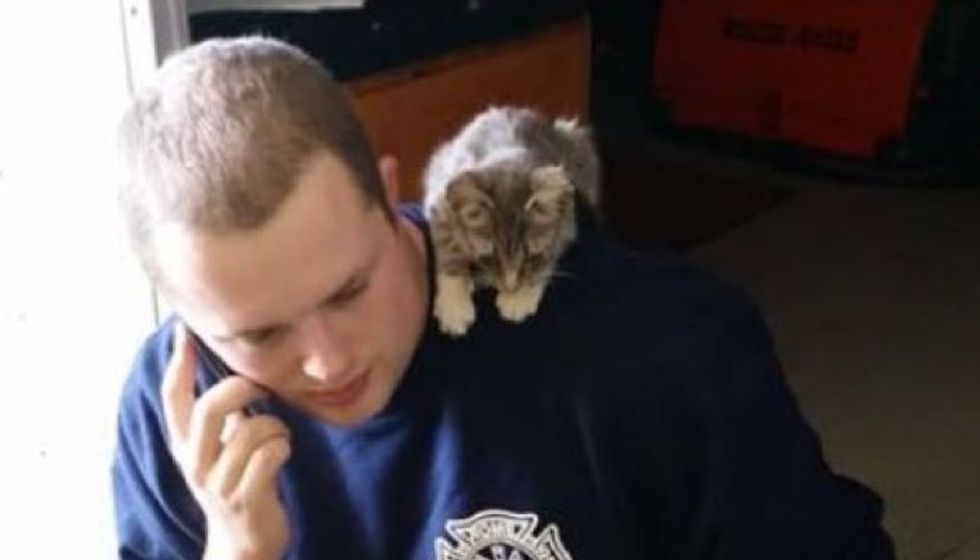 A tiny stray came to a fire department, meowing for love. He climbed onto a fireman's shoulder and that's when the man knew he had to help...

Reddit user Ephraim325 shares the story with Love Meow: "We are a rural volunteer/paid by call department, normally only have one guy that stays at the station, and over the last month or so he had been feeding a pack of kittens that a mother had hidden in our charcoal grill midsummer. I suspect this little fella was one of them. He was clearly a runt and seemed to be on his own when I met him.

Me and two of our other firefighters were coming back from a water rescue team training that morning and we were cleaning off our boat outside one of the vehicle bay when this little dude rolled up and started following us around the station and outside while we were doing our duties for the day.

He was an absolute sweet heart, wasn't scared at all about what we were doing. While we were cleaning I noticed he had a really nasty cough and a lot of snot and congestion, poor little guy barely breathe. I knew I couldn't take care of him for more than a few days before I headed back to my apartment and my other cat, so I called my parents and talked to them about Ash (That's his name, me and one of the other firefighters there gave him).

All he had done since I met him a few hours before I called them was try and sit on my lap, climb up onto my shoulder and rub against my legs purring as loud as he could. So after a little convincing my mom agreed she could take care of him for a few days, or at least until he was better. So I took Ash to my parent's house and let my mom meet him, all he did for most the night was sit on my lap coughing and sneezing but you could tell he was appreciative, especially after you fed him, probably the first time he'd ever been able to tell he was full.

A couple days later my mom took him to the vet, he had 4 types of worms (including lung worms), a few different types of parasites, a respiratory track infection, fleas and a nasty ear infection. So he was far from healthy. My parents were nice enough to foot the bill, once again with the intention of giving him to a family friend who had recently fallen on some hard times (lost their house to a fire, and their cat). However it took ages, nearly 2-3 months for him to be even healthy enough to act like a kitten instead of an exhausted old cat.

My parents had already fallen in love with the little guy, even my dad, who wasn't a fan of cats for the most part. So now he is living at my parent's house playing with his new best friend, Lucy, their 13 year old Pekingese. Ash has definitely managed to wear out Lucy in her old age but Lucy seems to enjoy it most the time now.

He wound up being the sweetest and friendliest cat my parents have ever met and now he's a permanent member of their house."

Sometimes cats choose their humans in a way they never expected. Share this story and help a kitty in your area find their forever home!