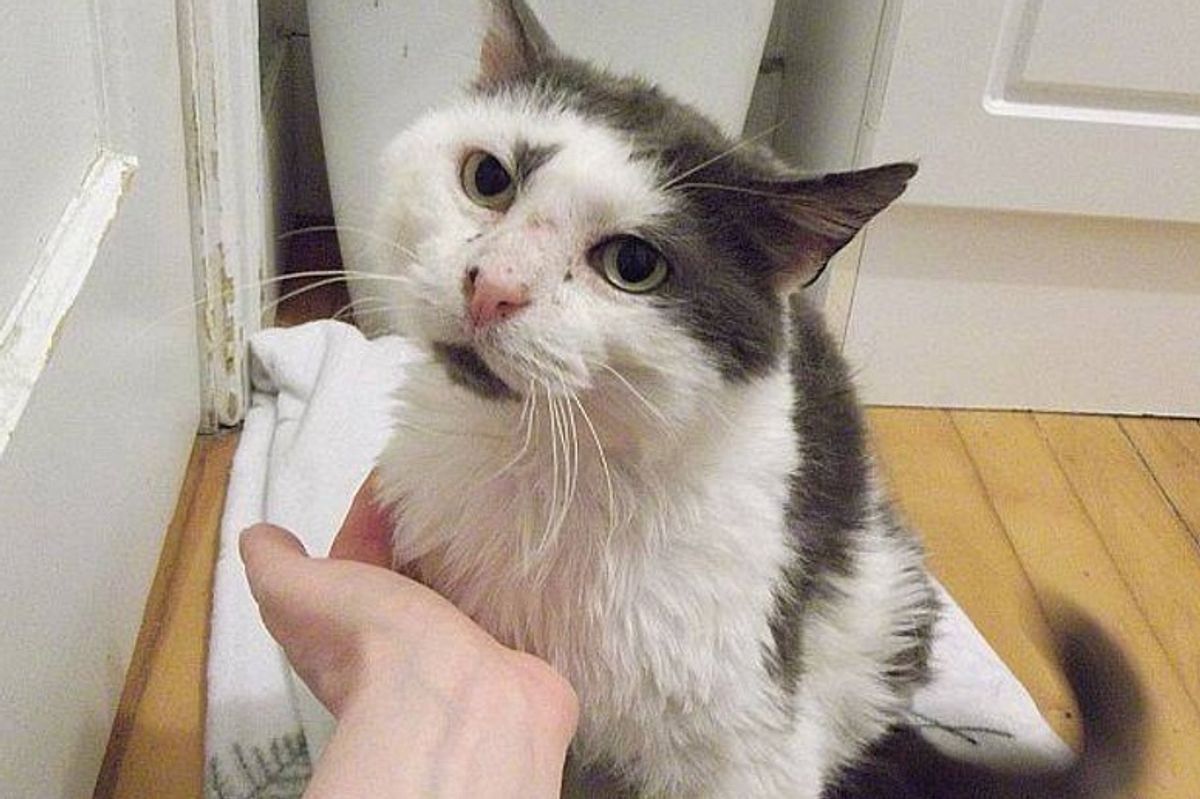 After 11 Years On the Street, Cat Makes Incredible Recovery While Others Didn't Think He Would Survive

After 11 years wandering the streets, Teddy the cat was rescued, in very rough shape. No one expected that he would survive but Teddy surprised them all with his incredible will to live.

"We've taken in some 'long shots', but Teddy was one of the 'longest shots' I'd ever seen."

Eight months ago Leesa White and her husband Dan (animal rescuers from Ivy's Memorial Rescue in Windsor, Nova Scotia, Canada) learned about the plight of a street cat who had used most of his nine lives.

"Teddy had been living on the street for about 11 years, according to a few people who had been feeding him, one of whom also built Teddy a shelter. I was called to help trap Teddy, when he became very ill. He was in very rough shape and all of us involved in his rescue thought he would be euthanized at the Vet clinic," Leesa told Love Meow.

Teddy had a severe and advanced case of Plasma Cell Pododermatitis, but his blood work showed that he still had some fight in him. Leesa offered to take him home, along with several medications.

"The odds of recovery weren't great, given Teddy's very poor condition, but I agreed to take Teddy home so that he could at least spend what little time he had left (or so we thought) in relative comfort," Leesa added.

The first few days were very tough for Teddy. "He hated his many medications and fought me with amazing strength for such a sick cat."

"I cried every time I had to wrestle him to take his meds, but there was something in Ted's eyes that made me keep fighting for him.. and with him."

After a week of medications (three times a day), Teddy started to get better and stopped fighting his caretaker. He even began to enjoy some pets and head scritches.

By the time Teddy returned to the veterinary clinic for a checkup, the vet was surprised that Teddy had survived and improved.

"I was starting to realize what an incredibly strong spirit Teddy had. The average life-span for a street cat is somewhere around four years, but Teddy had survived for an amazing 11 years on the street."

After a month, Teddy had gained three pounds and was slowly coming out of his shell. As he became more comfortable in his foster room, he walked out of his hiding spot and discovered the bed, and he loved it.

Slowly but surely, Teddy would get onto the bed with his humans for rubs, scritches and even occasional cuddles. They were taking "baby steps" before they tried to introduce him to the whole house!

"Once Teddy recovered, we tried leaving the foster room door open, hoping he would come out into the rest of the house, but he was very nervous, so to reduce his stress, we didn't keep the door open too often or for too long, as stress makes his immune condition worse," Leesa told Love Meow.

"We started leaving the door open on a regular basis since about April. But it's only been since about mid June that he's started to come out of the foster room on his own."

"The sickly, 'feral acting', long-shot, very shy and nervous cat has become a relatively healthy, happy, affectionate, charming cat whose sparse fur has grown in thick and soft, who has developed a bit of a pudgy belly, and has a purr that would drown out a jet engine," Leesa said.

And Teddy has found his favorite bed in the house.

"This is what I found when I tried to go to bed. Teddy has not only stolen my husband, but he has taken my spot in the bed too.

They are committed to Teddy's continuing medical needs. Knowing that stress of a new situation may exacerbate his immune disorder, they want to do what's best for the sweet boy, so Teddy is staying with the couple whom he's grown attached to.

"I really didn't expect him to see Christmas, but I'm so happy he's thriving now. He is so sweet! I'm so lucky to have the chance to know him."

Watch him in this cute video: