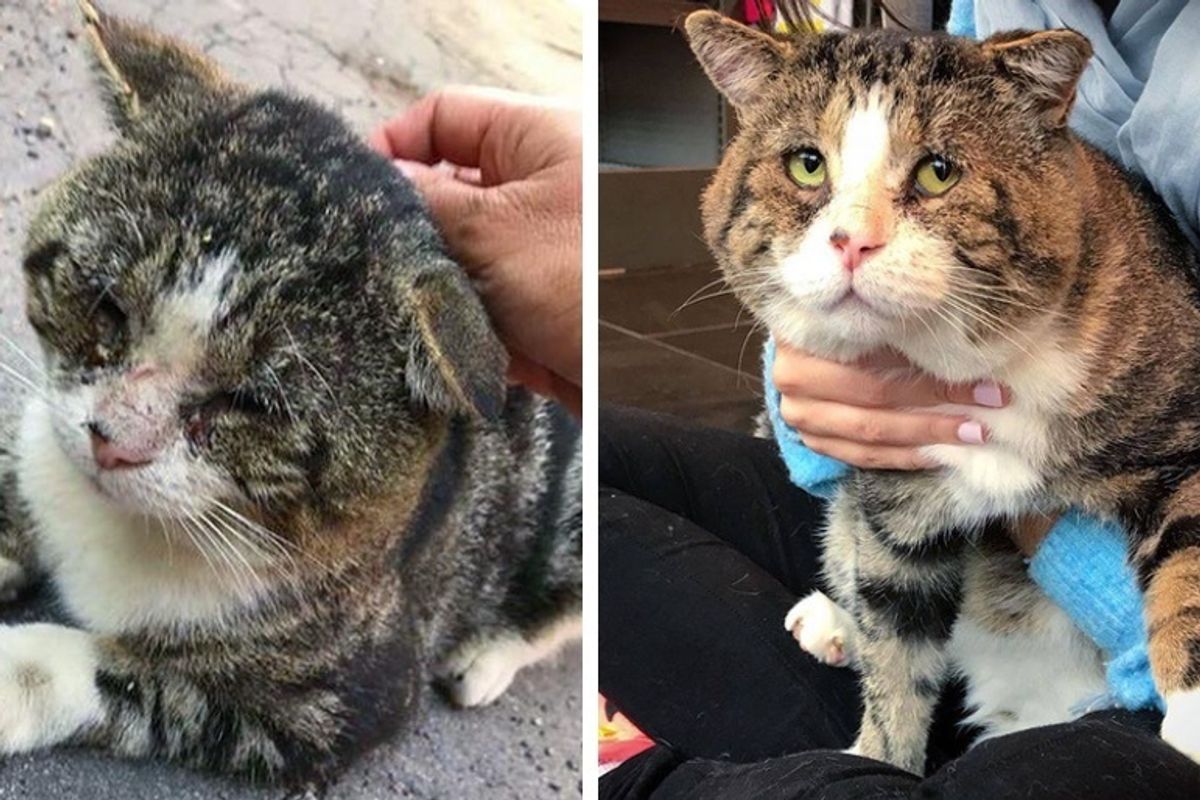 Cat Who Wandered the Streets for Years, Is Finally Warm This Winter and Can't Stop Purring

Padou the cat has spent years on the streets and survived many harsh winters. Now he has a roof over his head and a warm home for the cold season. 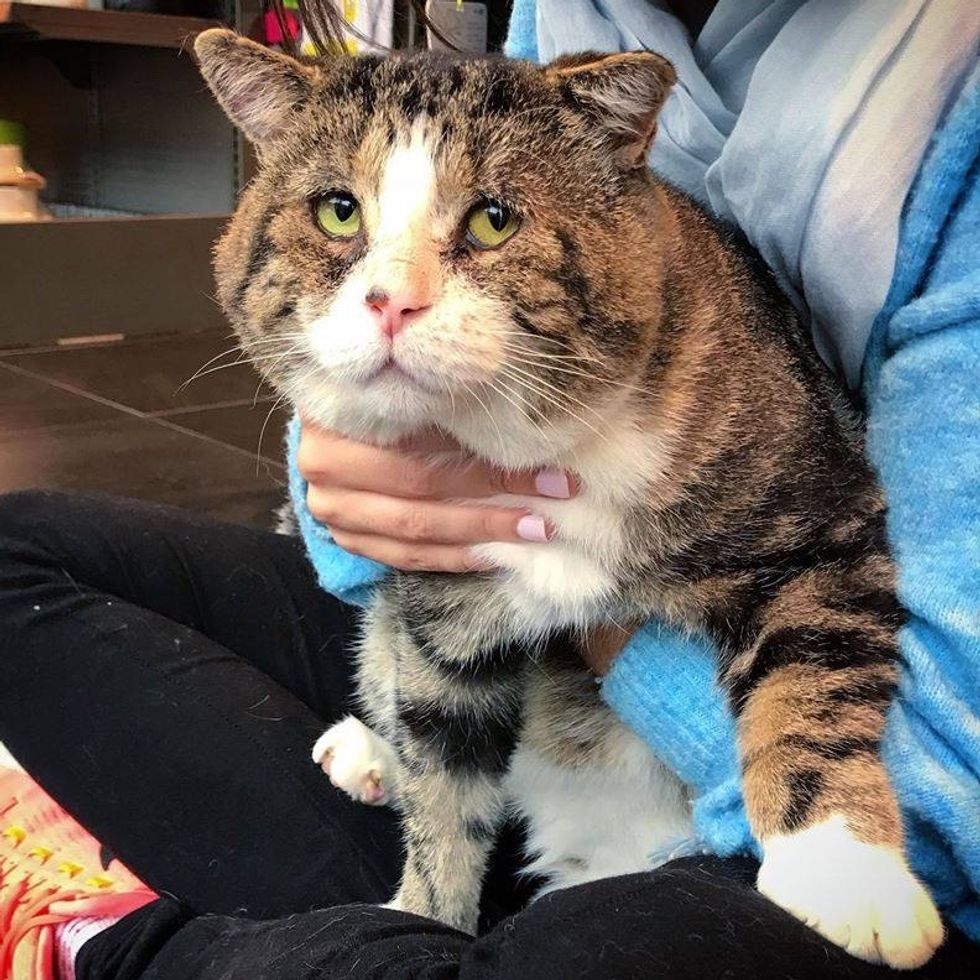 The tabby cat was rough around the edges and covered in battle scars. Life had been tough on the little guy. Many people saw him wander the streets in the neighborhood (of Montreal, Canada) but they just passed him by.

A few months ago, a woman named Aya spotted the kitty and just couldn't walk away. Padou was fearful of people so Aya began feeding him every day to gain his trust.

She was able to get a bit closer to the kitty over time, but when she tried to pet him, he would quickly recoil. Aya never gave up. 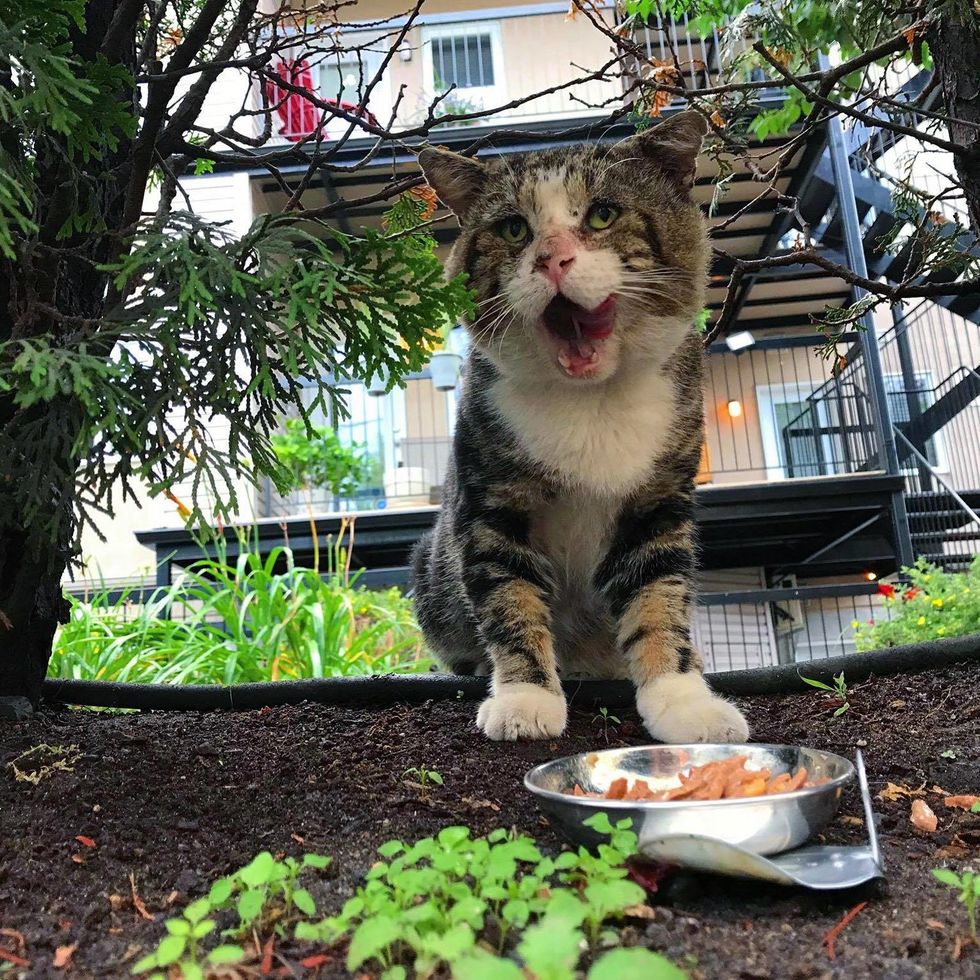 When summer ended, Padou's condition quickly deteriorated and he started having trouble to breathe. Aya couldn't let him go through another bitter Canadian winter.

The tabby cat had been seen in courtyards, on sidewalks, under people's cars but no one had claimed him. 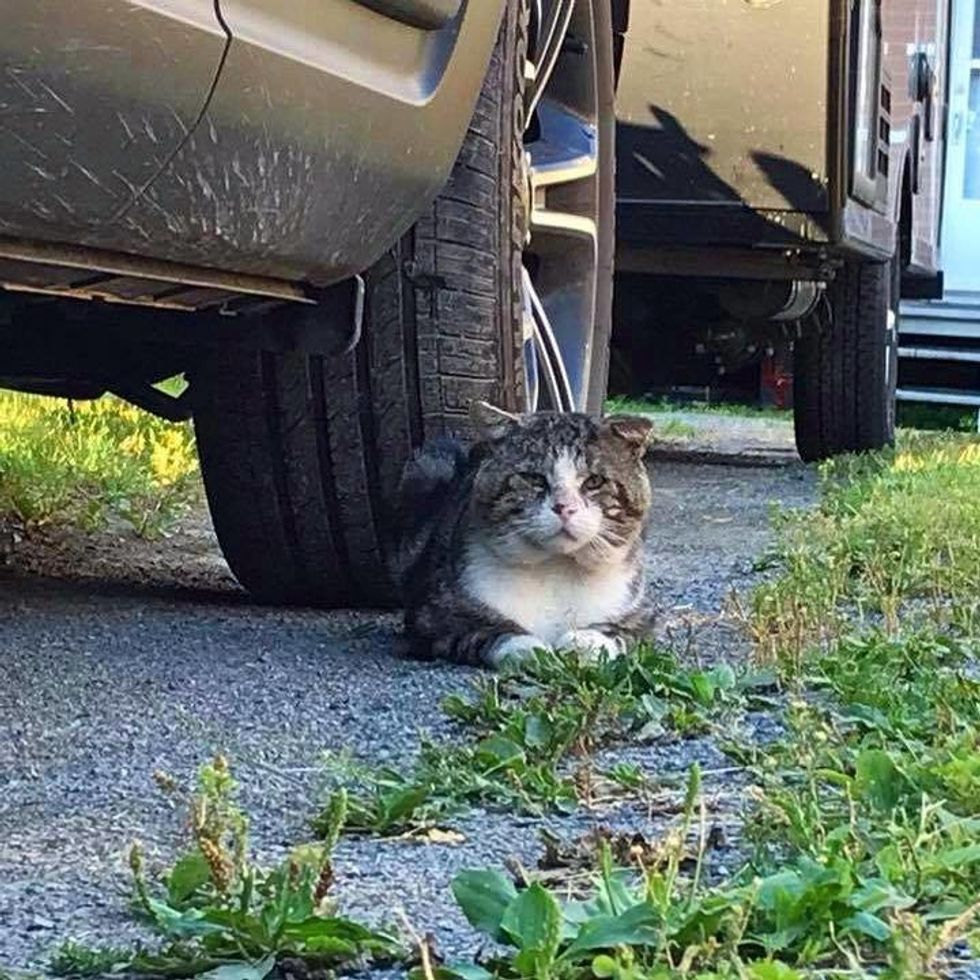 Aya reached out to Chatons Orphelins Montréal, a local cat rescue group, and together with another volunteer, they set out traps in the area.

Soon they realized that the plan didn't work. 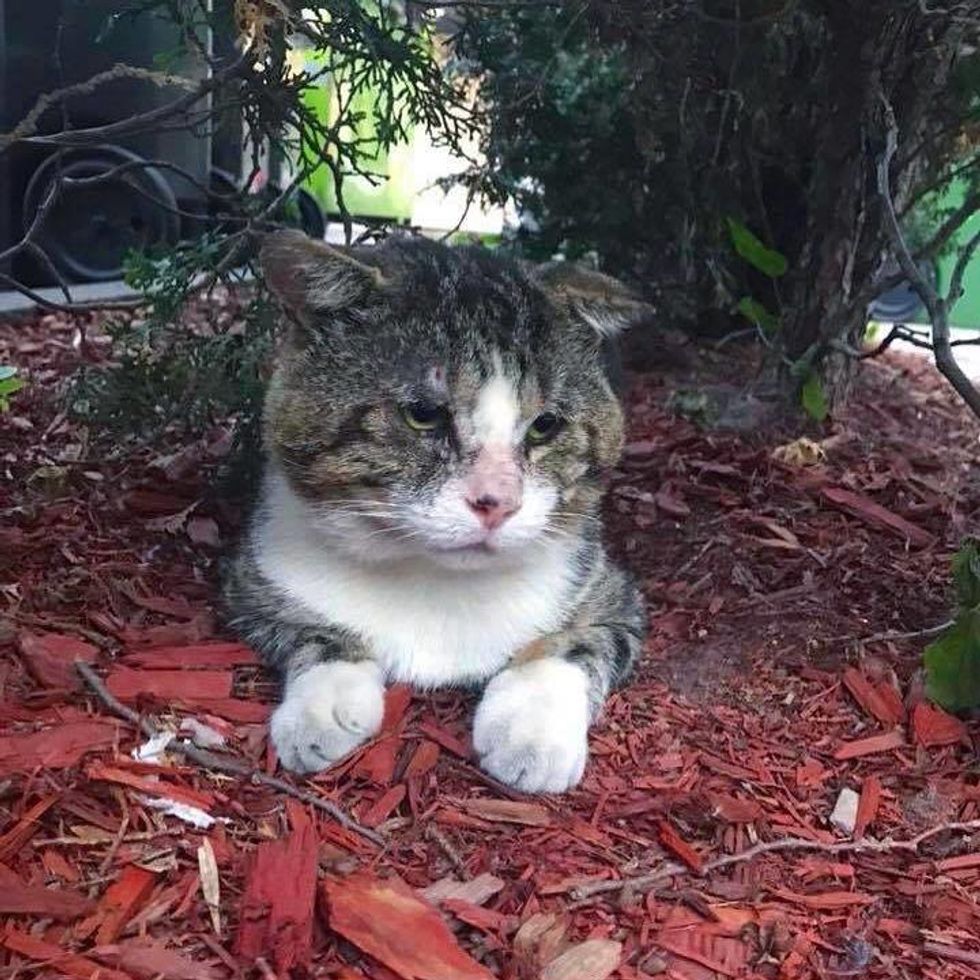 Padou had learned to evade them from his previous experience and wouldn't go into a trap, so rescuers had to change to a different strategy.

They continued providing food, and while he was eating they would hand feed him so the kitty would get used to being touched. "After a few more weeks, he decided to trust and even allow pets," Chatons Orphelins Montréal said. 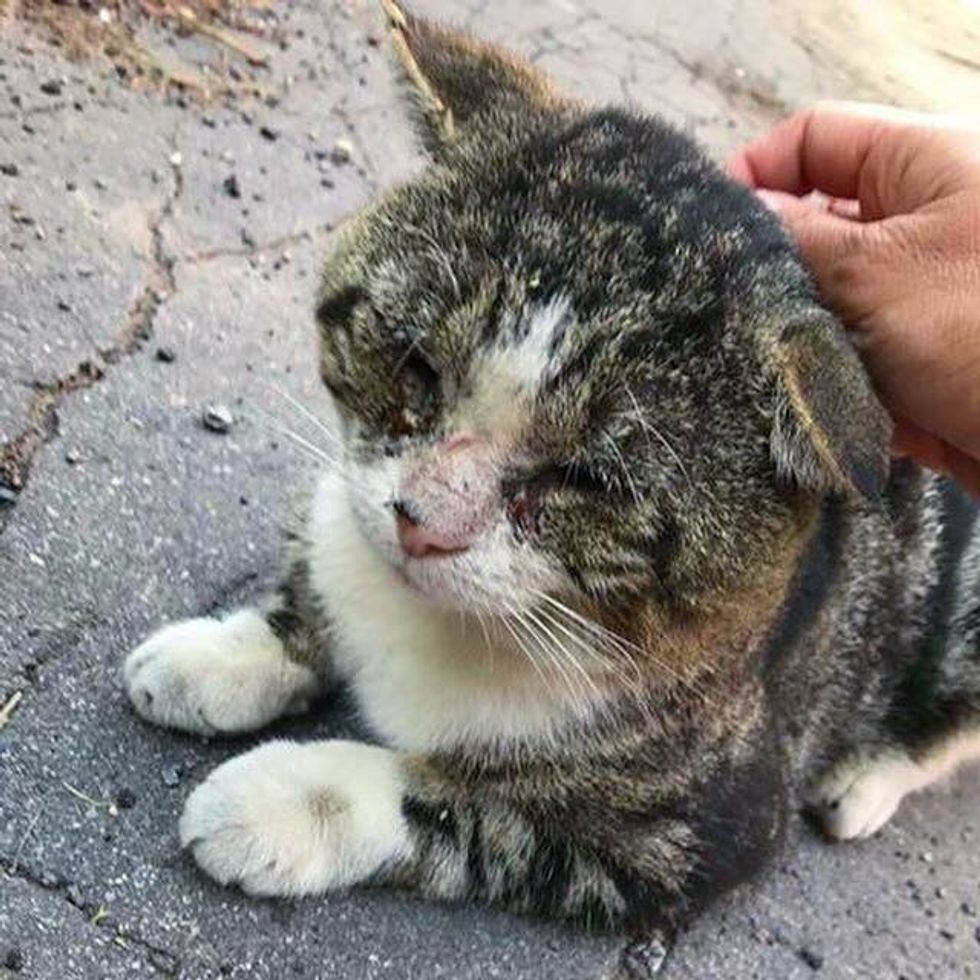 Finally, they were able to scoop him up and put him in a carrier. "Wandering the streets is not a life but a struggle for survival. His rescuers refused to leave him behind so his life could be saved."

Padou was in poor shape when he was brought in to the vet. "He was full of fleas, worms and parasites and had trouble breathing. His ears were deformed due to battle wounds and he tested positive for FIV." 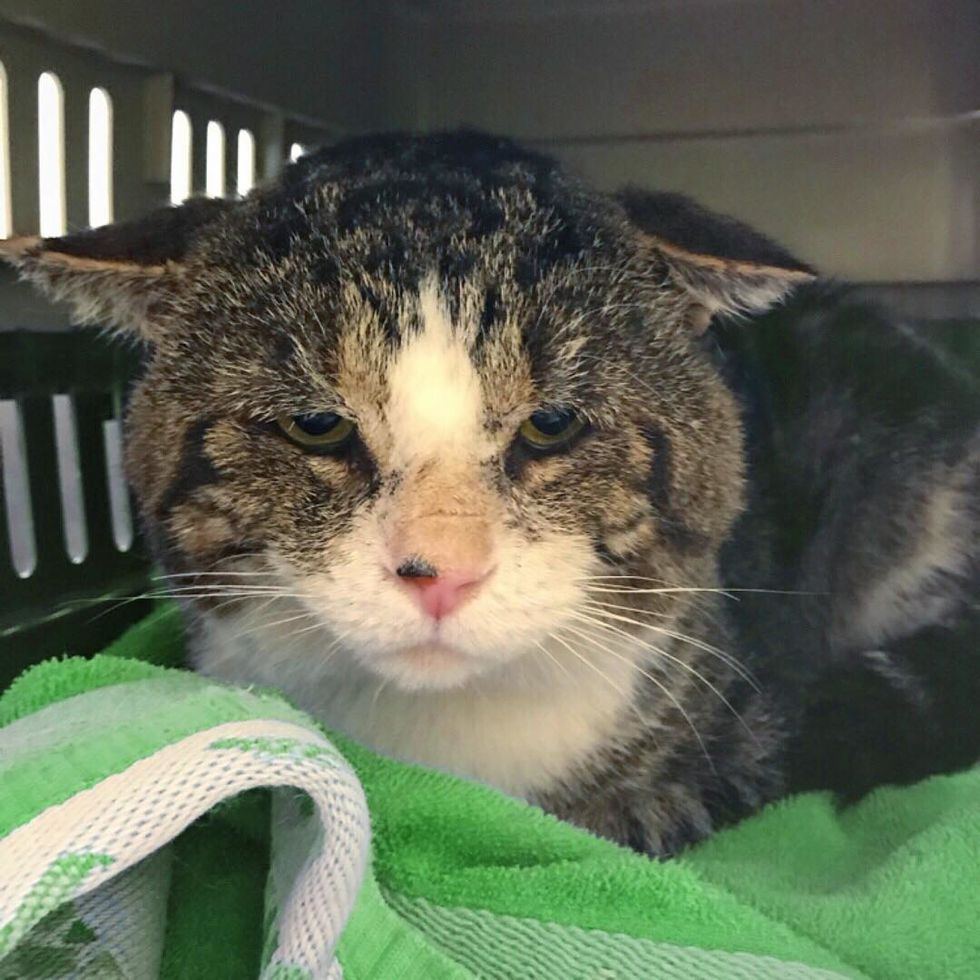 They started him on antibiotics and took him to a foster home where he began his long recovery journey.

"Since he was rescued, he's been so sweet and calm as if he knows he's in good hands. He allows himself to trust again." 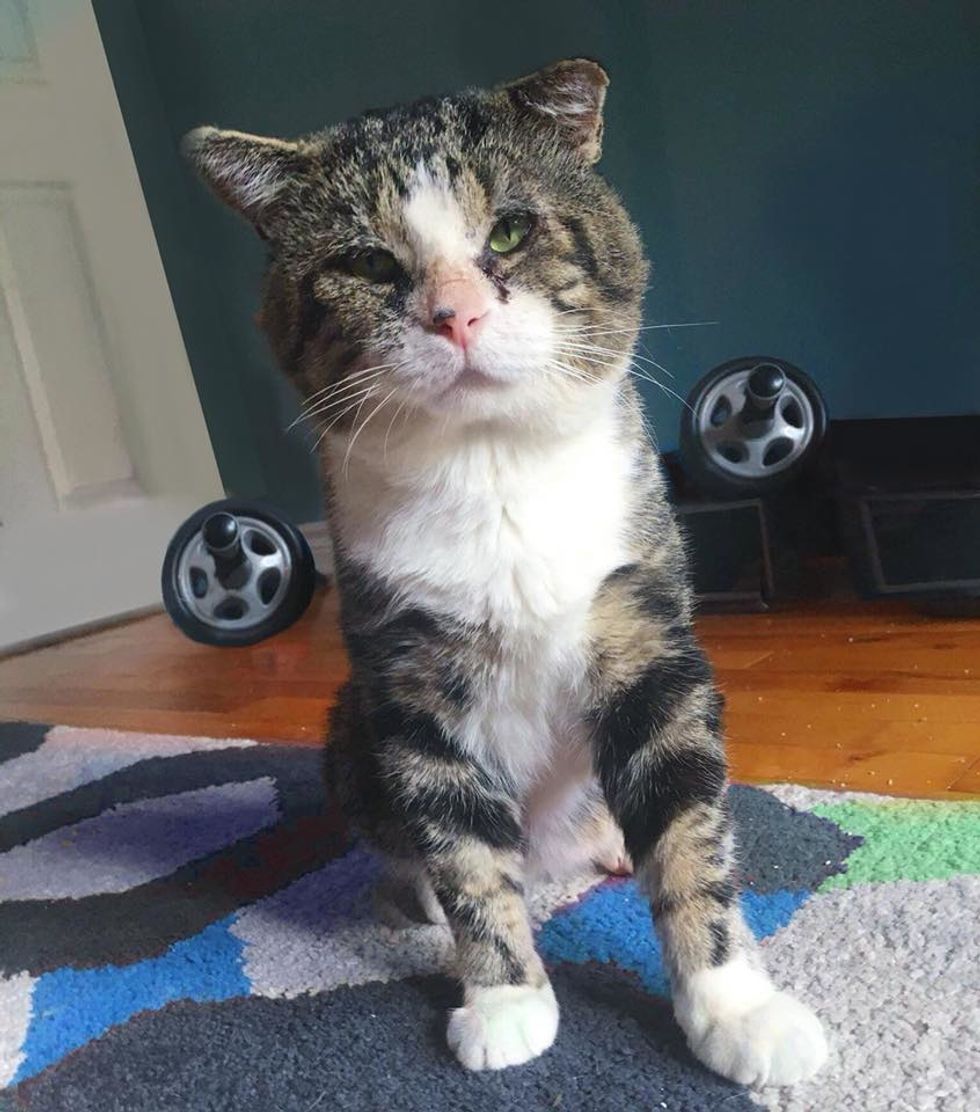 Padou quickly adapted to the indoor life. He would walk up to his foster mom, Morgane et Benjamin, for attention and cuddles and follow her around the house, keeping her company.

"If she is on the computer, he's next to her, watching what she's doing," the rescue told Love Meow. 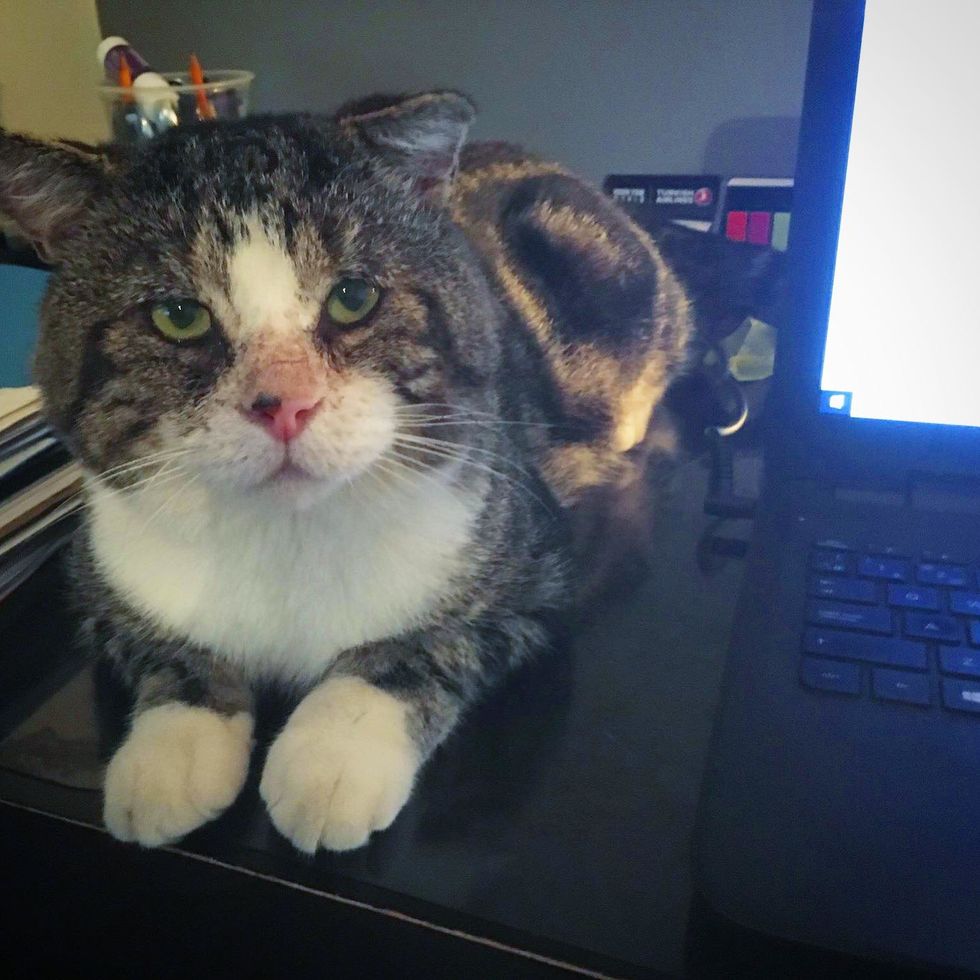 "Padou loves playing and running all over the apartment. He sleeps on Morgane's knees at night and is never far from her."

He gets a bit nervous around other cats and new people, but once you show him love, he immediately turns into a teddy bear and is as sweet as can be. 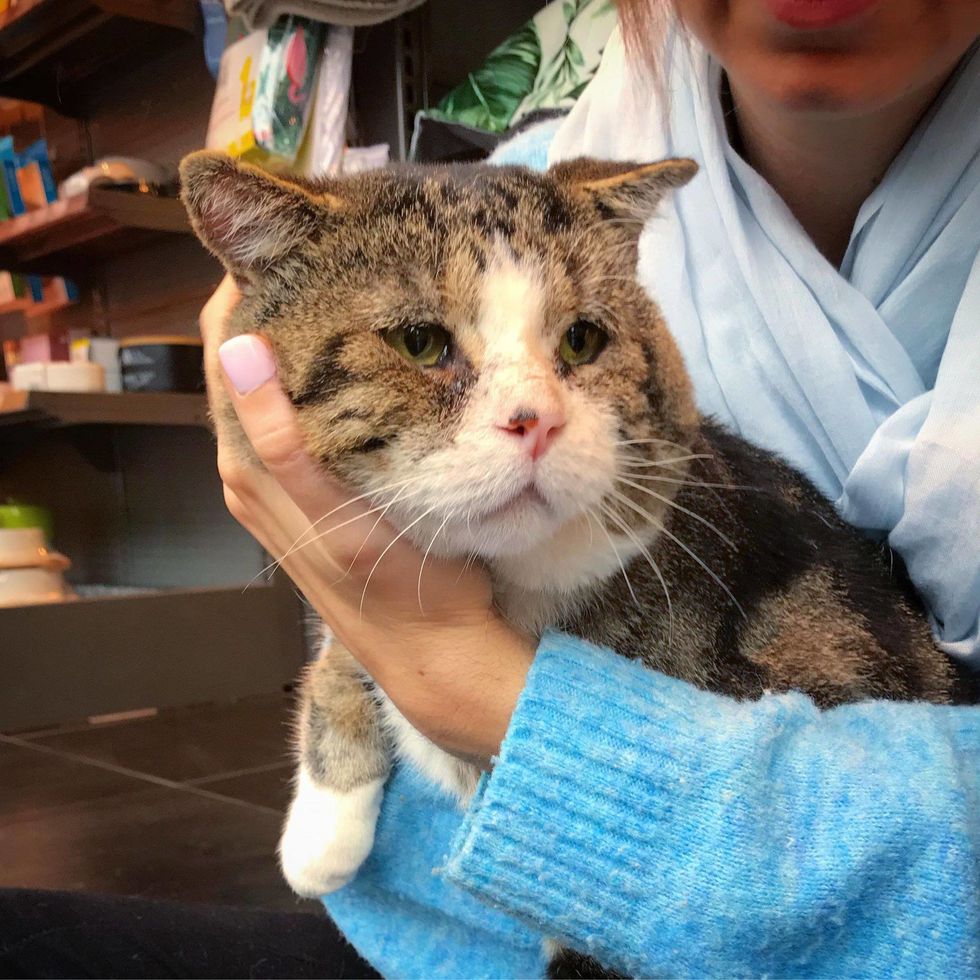 As he got stronger, he became more vocal and was no longer shy of meowing for attention and love.

Cats with FIV can live long and healthy lives with proper care and plenty of love to go around. 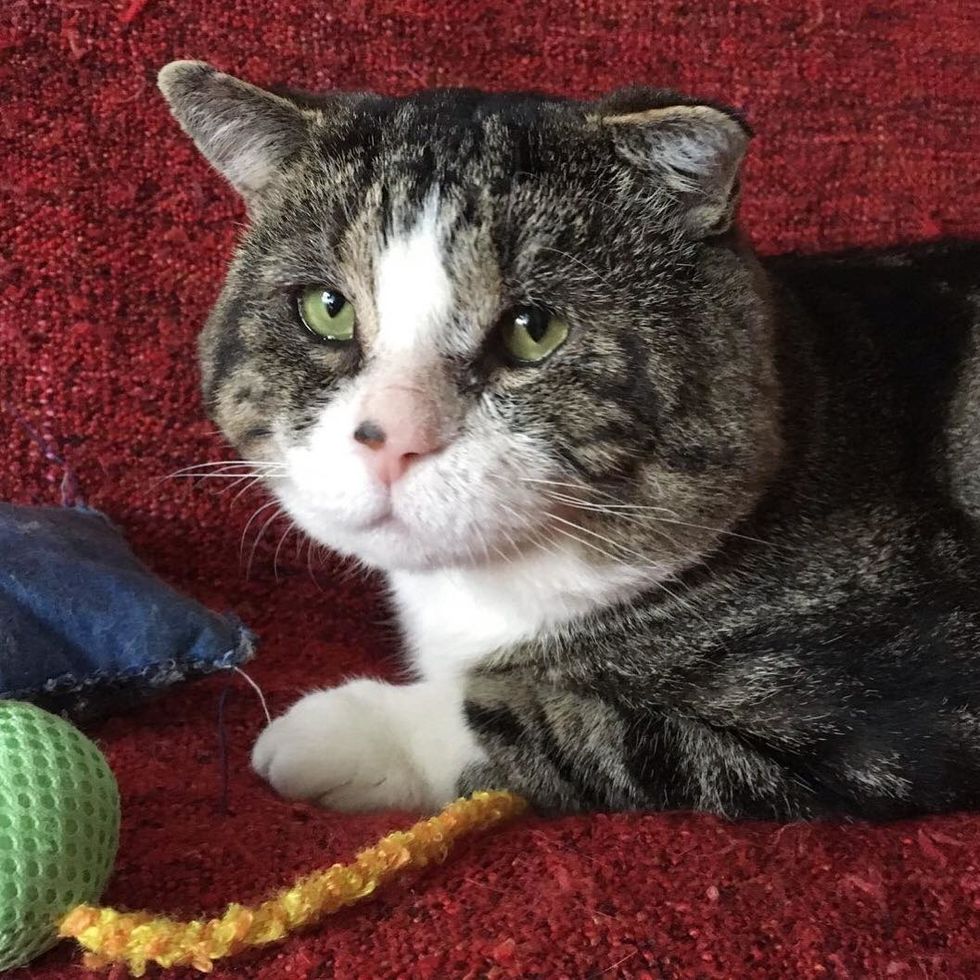 Padou is finally ready to find a forever family.

He wants to be close to his humans at all times, and no closed doors are allowed in the house according to Padou. 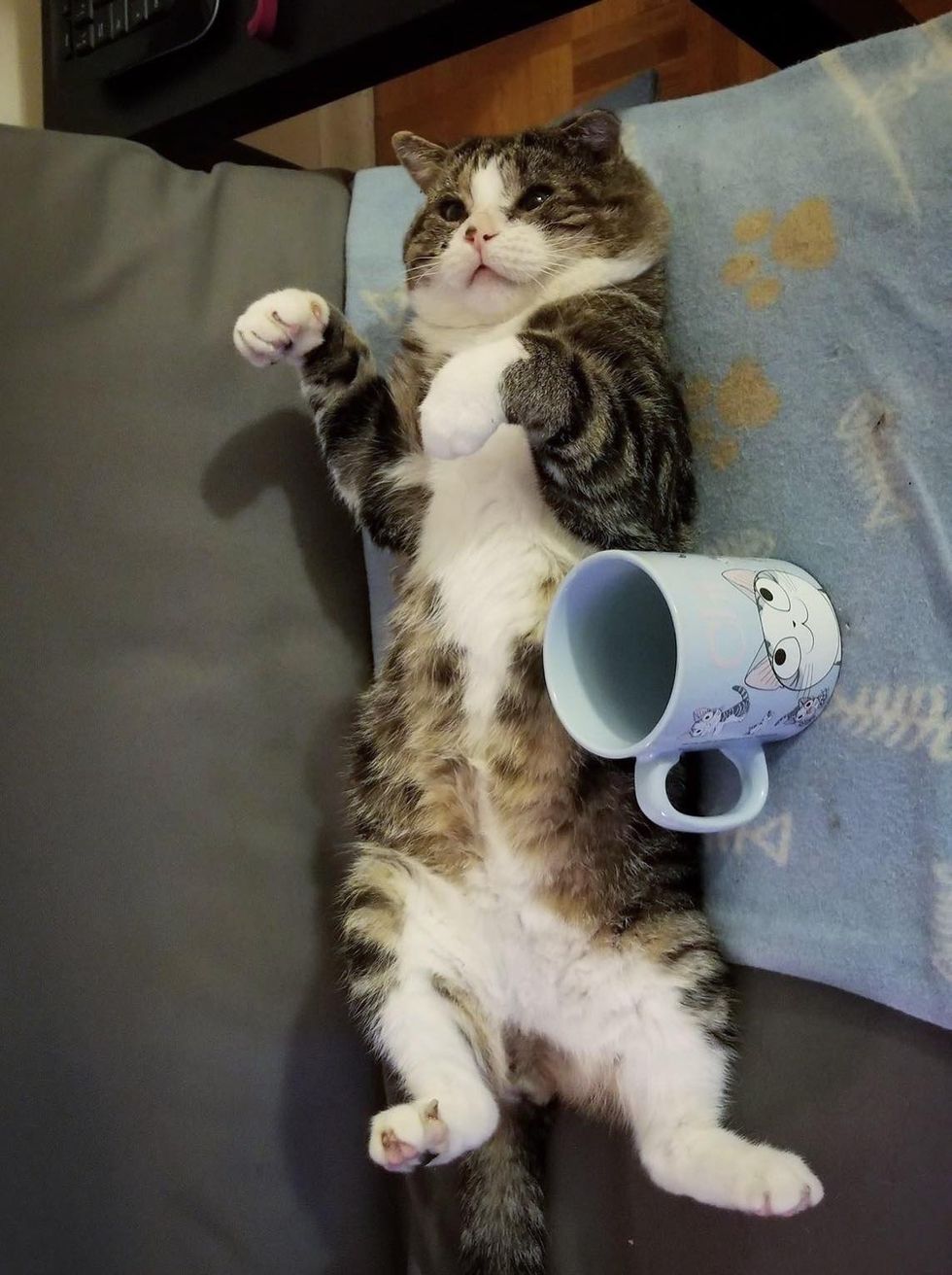 Padou is enjoying being a spoiled little kitty.

He hopes to find a home for the holidays and spend a lot of cuddle time with his forever family. 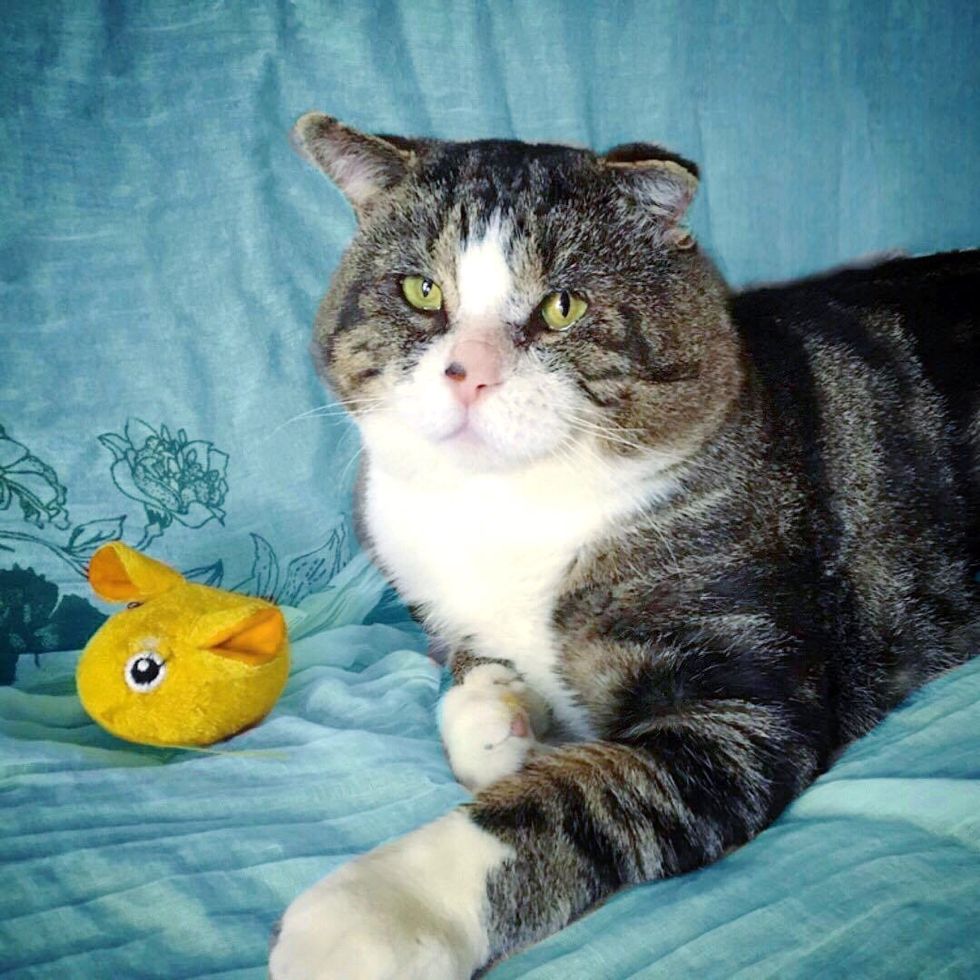 Related story: Cat Who Lived All His Life on the Streets, Tells Rescuer He Doesn't Want to Be a Feral Any More