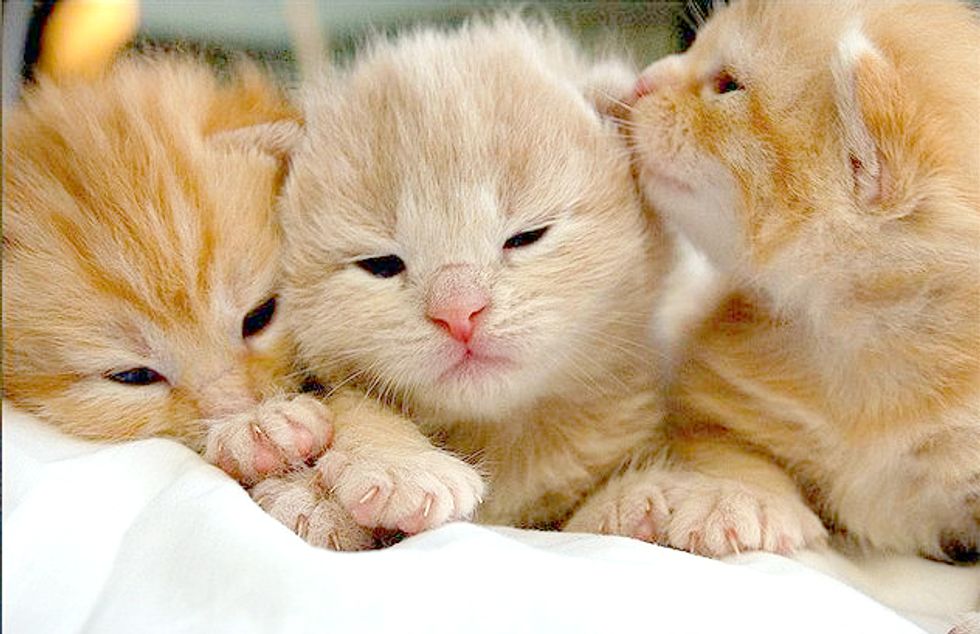 In the winter of 2003 - 2004 Genevieve's family received a pathetically thin pregnant street cat from Homeless Animal Rescue Team. Her name is Gina, short for Orangina. Very soon, the ginger cat momma gave birth to a litter of four kittens, "2 red tabby females, 1 red tabby male and a cream tabby female." They are called the red kittens.

"We had Gina (photo) through almost all of her pregnancy, the birth of her kittens and the raising of her family. We tried to keep her but our older cat fell sick because of the stress, so we found Gina a good home with a woman who lives near us. We hear news of Gina frequently."

When the kittens were big enough, Genevieve's sister in law decided to adopt 2 (Rhett and Scarlett) and Genevieve kept the other 2 kittens (Fanny and Shanti). Shanti loves to lie on top of the cat tree on her back in a yoga melting pose. "The funny thing is she still does this. It is ordinary enough that I don't even think to take pictures of her when she does it. She is a very sweet girl, even upside down," said Genevieve.

"Fanny loves to sleep and to be where everything is happening. She loves to eat and serves as the alarm bell for when food should be served. She has not yet learned how to ask for second breakfast, but I feel someday she will. She is a scientist and conducts many cause and effect type experiments. A favorite experiment is to push a new object to the edge of wherever it is located then knock it off while watching to see what happens when it hits the floor."

"So much has changed since they were born. These little angels are still our little (but big in real life!) angels now."

"I hope that these photos inspire someone else to foster a homeless animal. It is a rich and rewarding experience and teaches children more about our (humans) responsibilities regarding companion animals, homelessness and more," said Genevieve.