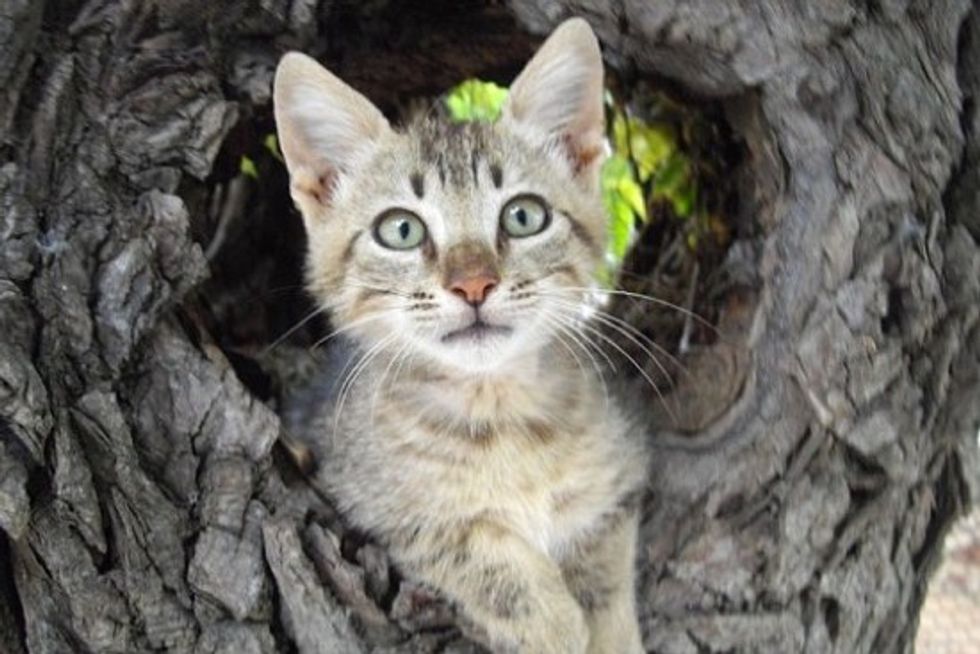 Squeak the Greek tabby cat found with half a tail and an injured leg has melted the heart of a woman from Britain. Ali Gill spent over £1,000 (over $1600) and started an international rescue mission to bring the kitty back to her home in Cornwall.

Ali met a little stray cat in an abandoned house, when she was traveling in the tiny island of Tilos in Aegean. The poor kitty was rejected by the mama cat and caught in a cat fight which left him with an injured leg.

Natacha, a French visitor, found the kitty and had been keeping him safe and treating his injury. "I arrived at the end of May for a holiday, and helped to feed him and I quickly fell for him," said Ali. "He was very vocal as being playful, affectionate, plucky and determined to survive. He was amazing - right from the start, as soon as he saw me he started making this crying sound which is why I called him Squeak." (Daily Mail)

"Despite his injuries he looked so lovely and healthy." Ali knew right away that she wanted to find a good home for Squeak.

"The local people feed as many cats as they can, but they don’t believe in neutering them." After visiting several potential homes for Squeak without luck, Ali realized how much she had grown attached to Squeak. She started calling airlines that would provide a service to transport pets. "The cost was high, but at least I knew he’d be safe, and would only have to endure a few hours of distress for a comfortable, healthy life."

Ali went on a two month long rescue mission to fly the kitty back to her home in the UK. "Squeak the survivor made i through…. Now he's settled in at our home. He's very cuddly but still playful. He's bigger and stronger, and the wound on his leg hasn't healed completely but he no longer limps…."

"And after his long, complicated and expensive journey, he'll have a good, healthy life where he won’t have to fight for food and shelter."

Squeak the kitten was found on the Greek Island of Tilos with half a tail and an injured leg.

Ali Gill from Britain met the little tabby in an abandoned house. When she started feeding the little kitty, she quickly fell in love.

Ali couldn't find a perfect home for Squeak on the island, and that's when she realized how much she had grown attached to the kitty. She started a rescue mission to bring Squeak back to her home in Britain.

Squeak survived the long and tough journey home, and has settled down in his new home in Cornwall.

Relaxing in the sun on a comfy chair.

"And after his long, complicated and expensive journey, he'll have a good, healthy life where he won’t have to fight for food and shelter," said Ali.