Fearful Roadside Kitten Experiences Love for the First Time, It Changes Everything

It was October 15 last year, when a tiny hopeless kitten was spotted on the side of the road, trying to stay alive.

"I was driving home from the post office when I saw a small kitten huddled in the grass off the side of the road," Mercedes Tyson told Love Meow. 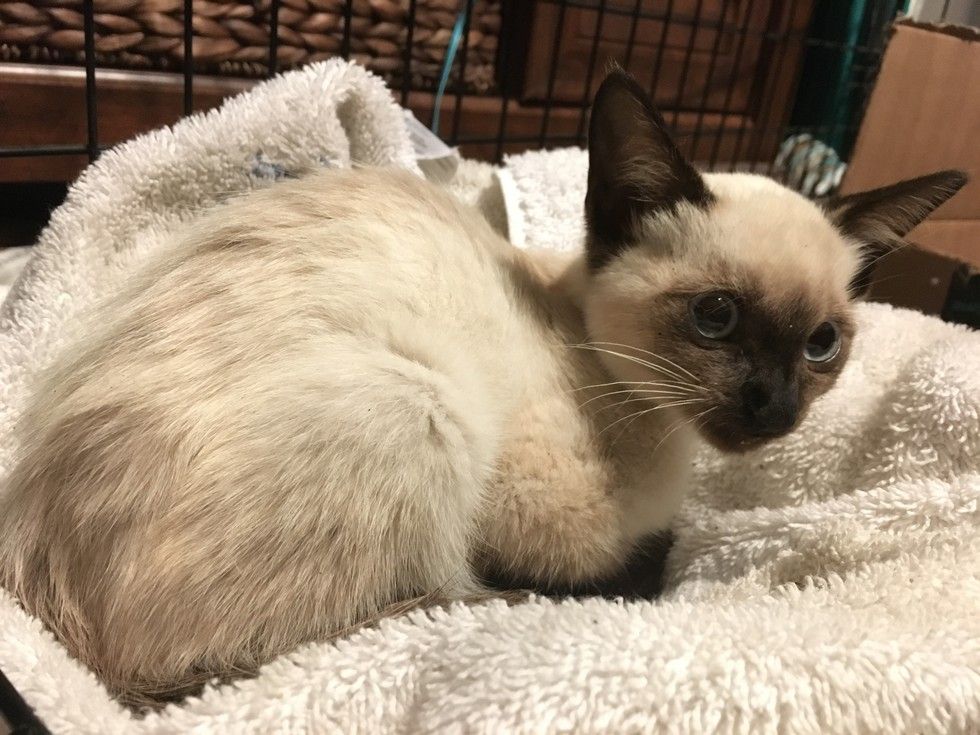 Mercedes stopped immediately to investigate. As she approached the kitten, she could see the fear in her eyes and the frailness in her body.

Just when she tried to pick up the kitten, the little feline mustered the last bit of strength that she had to try to fight off her rescuer. She was extremely fearful. "She tried to run away from me, but her legs kept giving out from underneath her and I was able to grab her," Mercedes told Love Meow.

The scrawny little kitten kept fighting to escape with her teeth and claws until Mercedes wrapped her up in a towel, and it helped calm her down. "She stopped fighting and actually settled down a bit."

"It was so clear how sick she was. Every bone in her little body stuck out and she was covered head to toe with fleas." 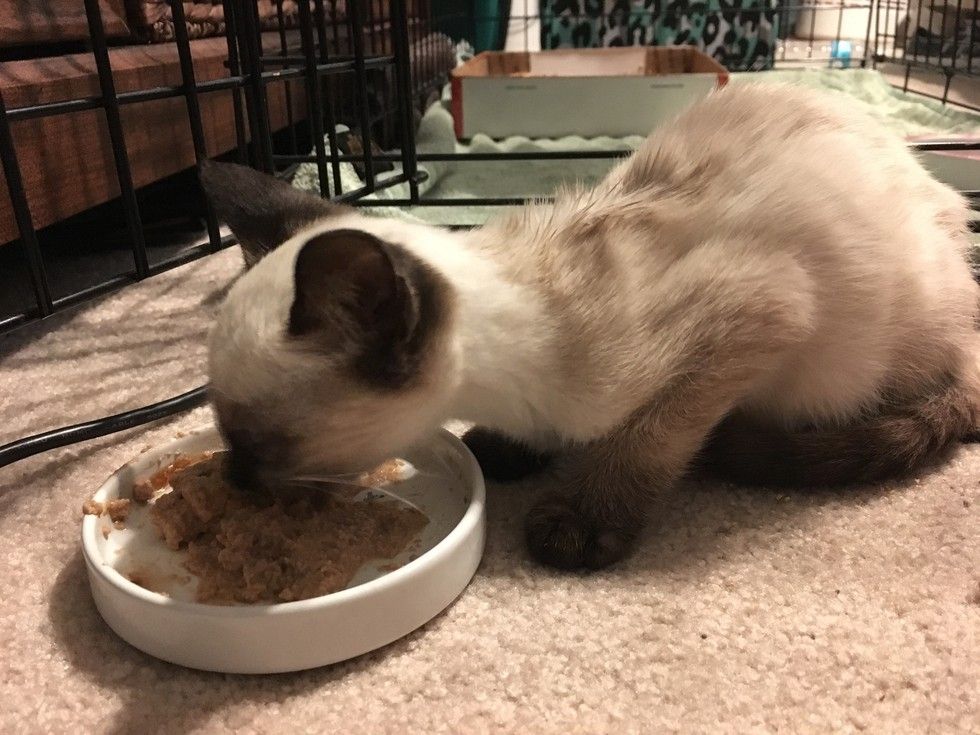 The one month-old kitten was so weak that the little bit of energy she had went into eating and drinking.

"In the beginning she barely had enough strength to pull herself into her makeshift litter box. The vet said that the fleas had made her very anemic and her gums were almost white."

They fed her every couple hours for a week. After many sleepless nights, the kitty began to perk up and feel better.

The fear in her eyes completely vanished, and it was replaced with love. 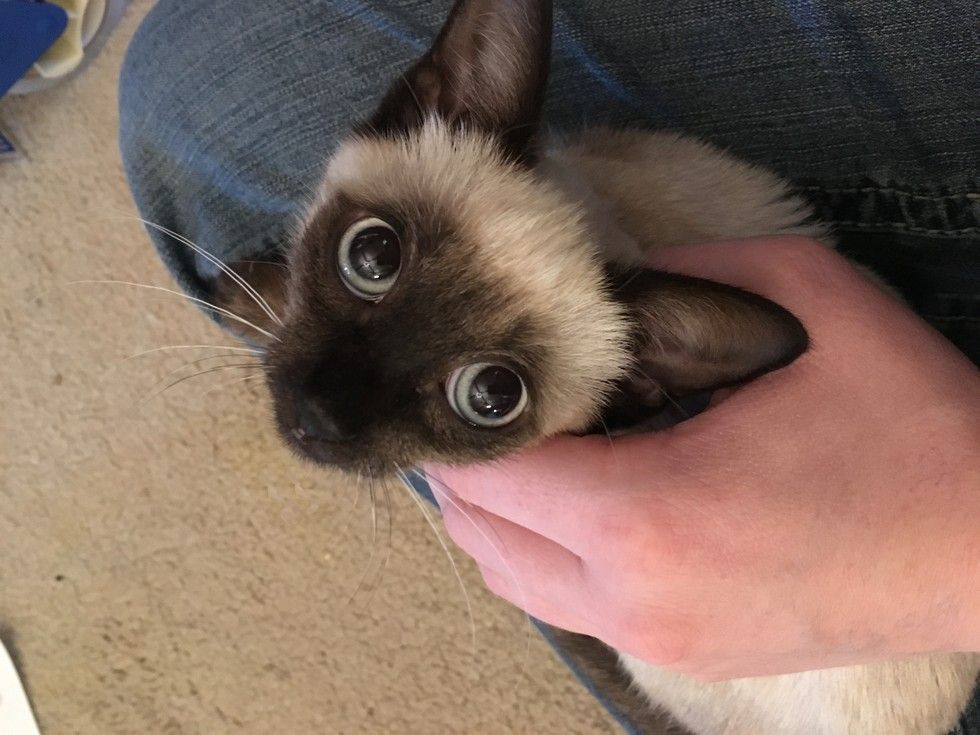 "That's when her true spirit made its appearance. She is the wildest little cat I have ever seen in my life. She'll steal bread out of your hands in the split second you look away. She is truly a survivor."

When it comes time for bed, she demands snuggles. "She is the cuddliest little animal you have ever seen." 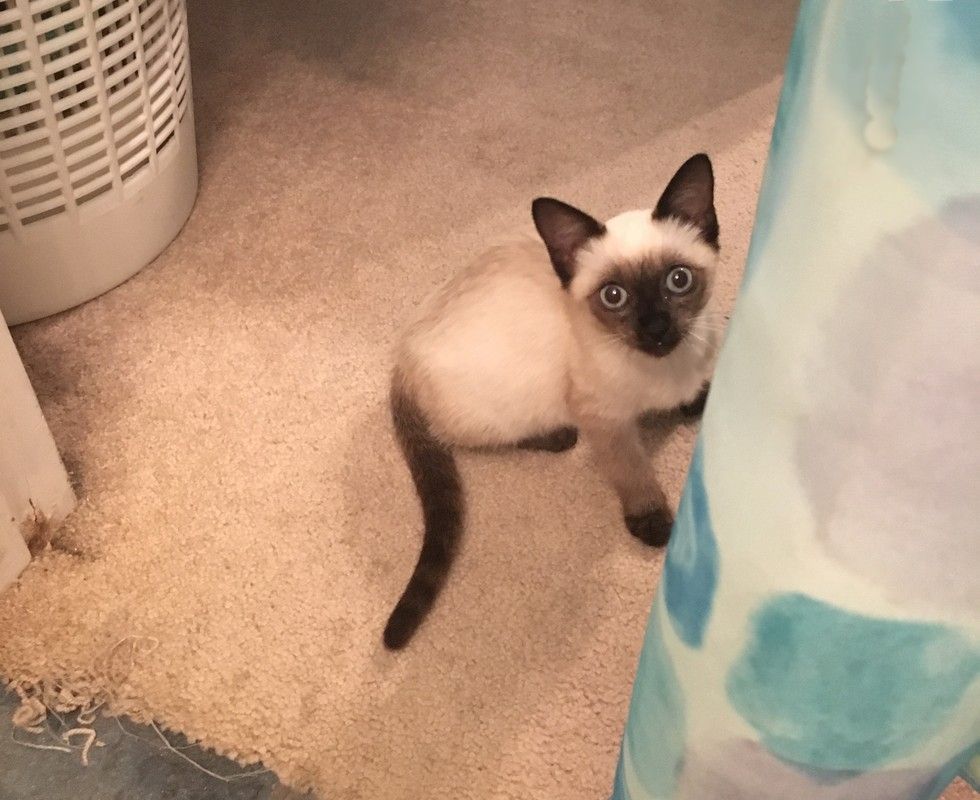 They originally were planning to foster the kitten until she was well enough to be adopted out, but the little Siamese never left their house.

She was named Eva, and they made her permanent part of their family.

Playing with her forever human. 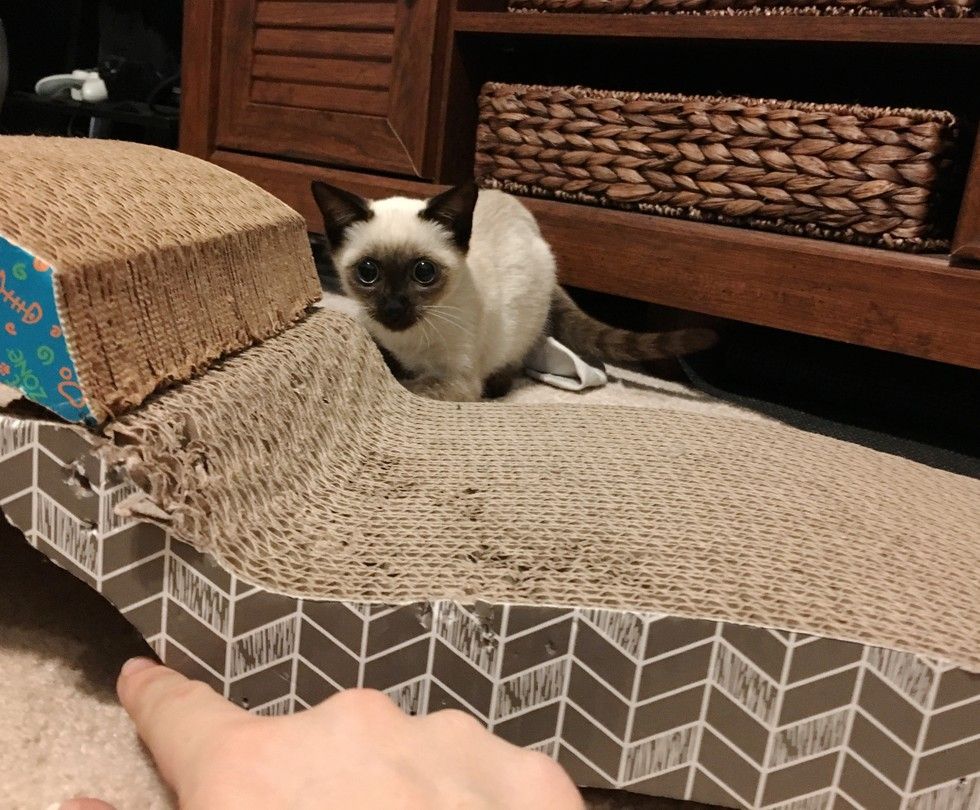 Eva has a big personality. 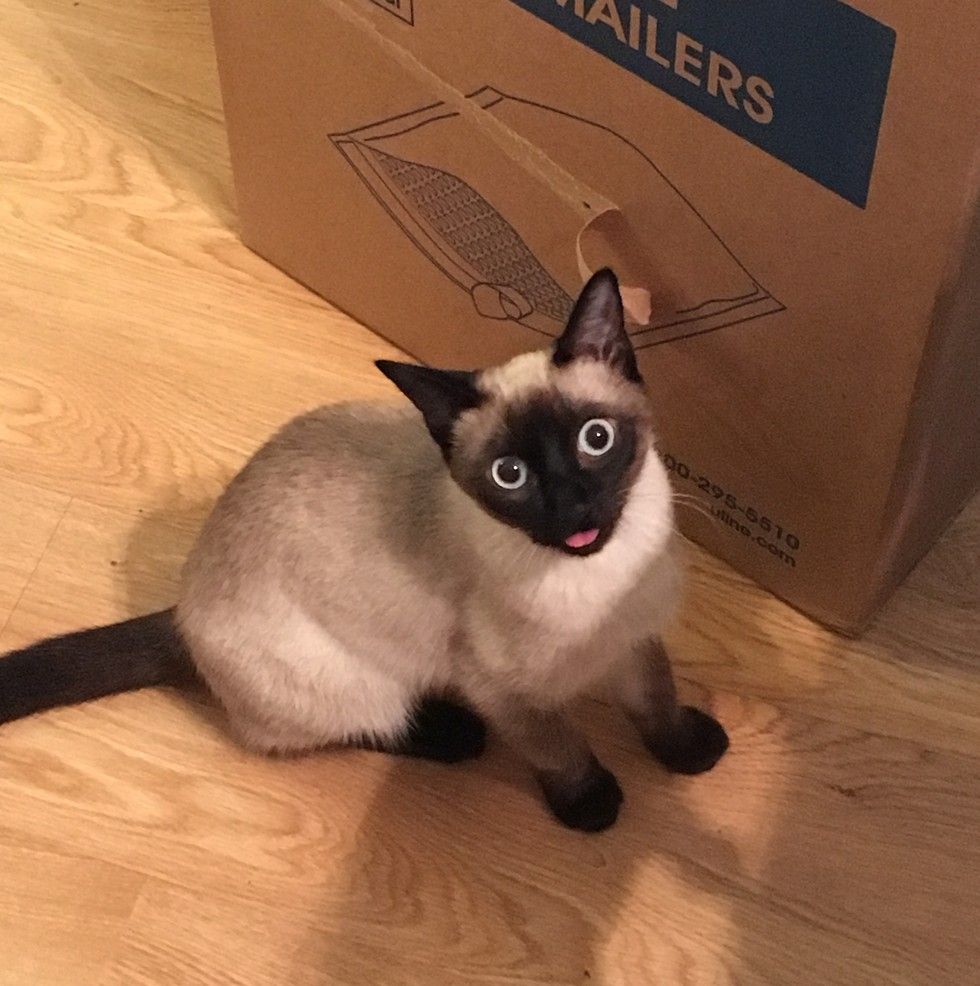 She loves her best friend Sully the one-eyed pirate cat. 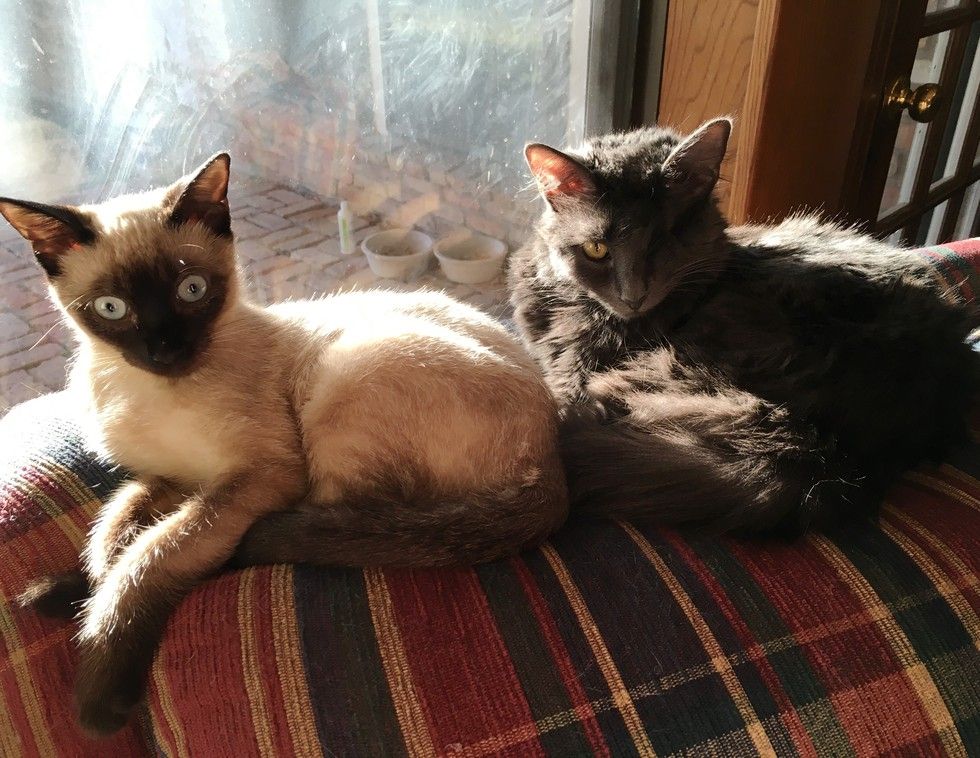 A year later, the roadside kitty has grown into a beautiful lady cat.

"I love her with every fiber of my being," Mercedes told Love Meow. "We have been inseparable... She and I even share a birthday, September 3rd." 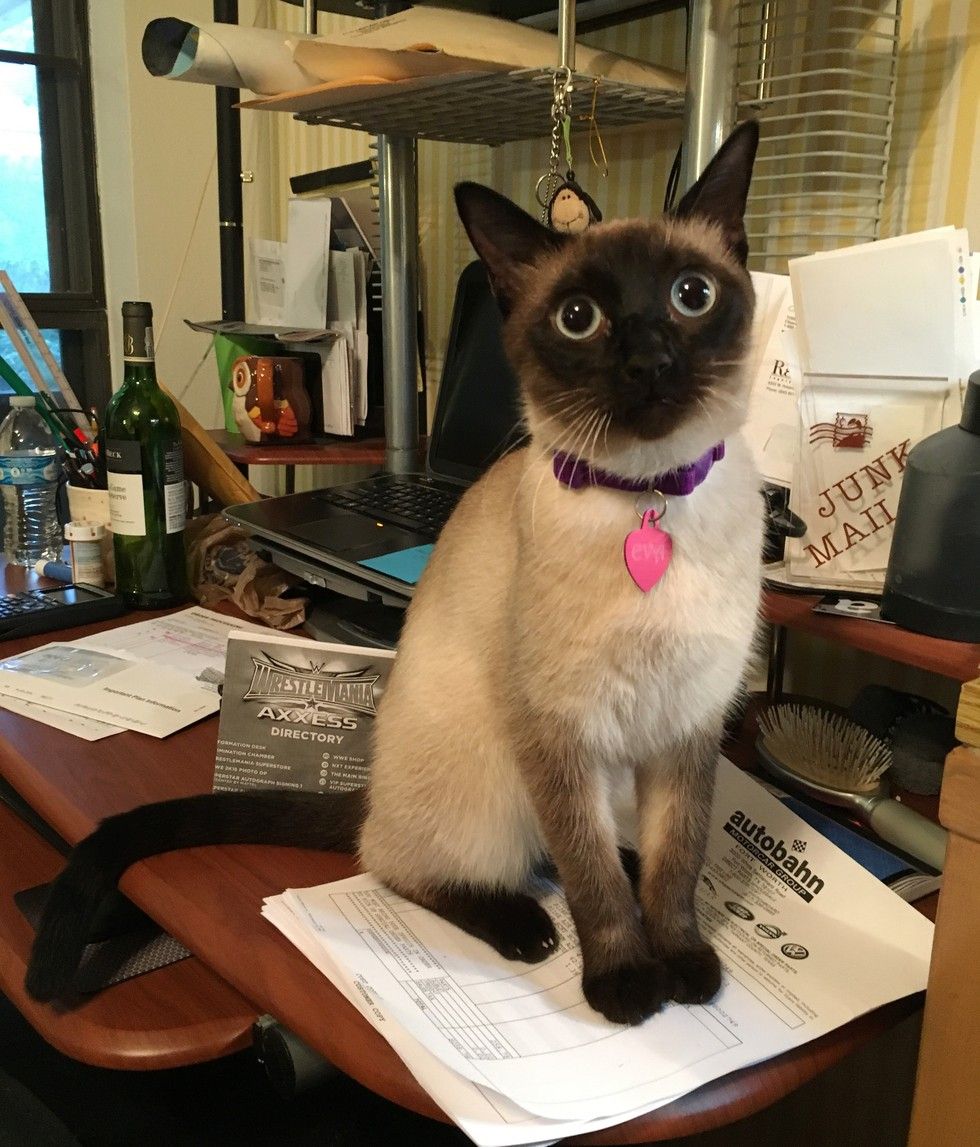 Related story: Kitten Found in Garage Fears for His Life Until They Show Him Love