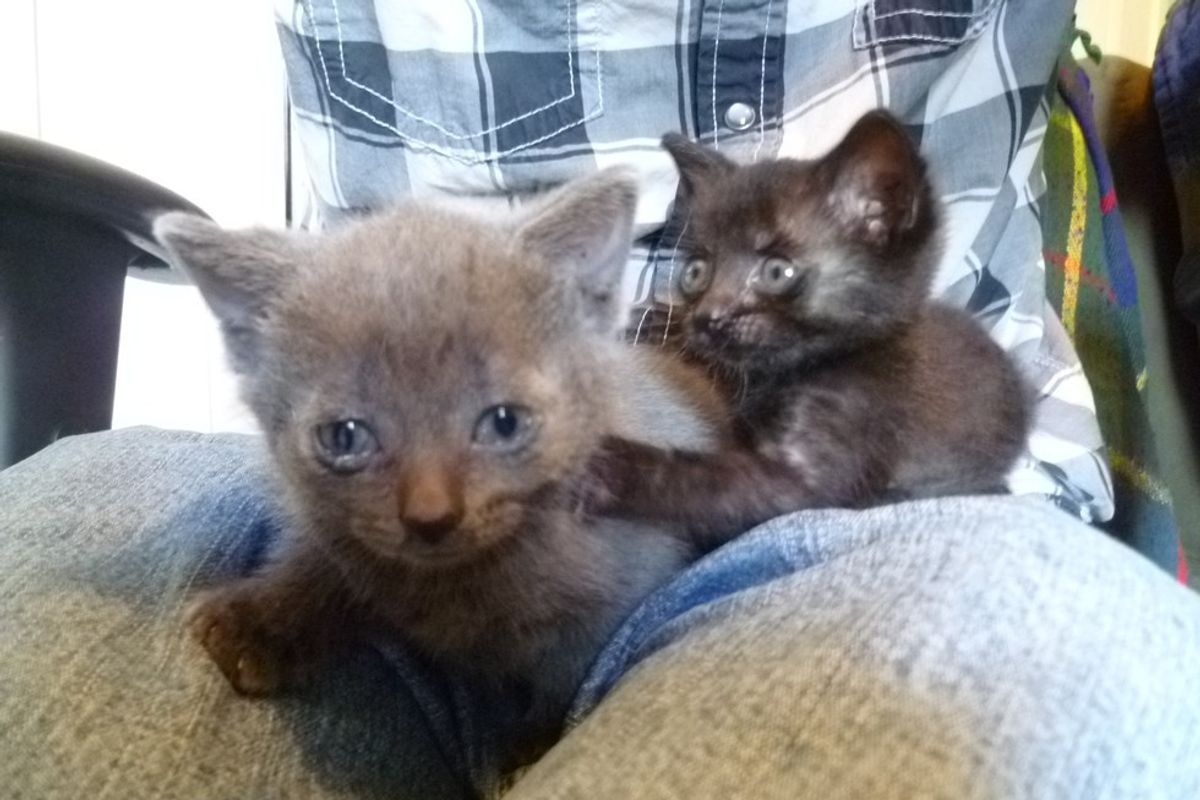 Two 4-week-old kittens braved through a Texas flood last year. They were surrounded by water, crying in a thunderstorm. A woman heard their plea and rushed to the rescue.

"Over Memorial Day weekend in 2015, Austin flooded badly. The bed and breakfast I work at has a feral cat colony, and one of the cats who we had not yet been able to TNR had just given birth under the house," Christina wrote on GreaterGood.

Water kept rising in the yard, she could clearly hear the little kittens meowing. "So I put on my big rain boots and waded out in knee-deep water to find a little grey kitten marooned on a rock, a foot of water on all sides. Her mother and siblings were nowhere to be found. I snatched her up and dried her off and took her home, along with one of her siblings."

The two kitten sisters had goopy eyes, parasites and fleas, but they were so happy to be away from the flood waters and safe in a home.

They gave them several baths to remove all the fleas.

"We fed them KMR with a syringe every 4 hours until they were old enough to eat gruel. It was hard work, and involved my partner and I sleeping in shifts to make sure the kittens could be fed all through the night," Christina said.

They made sure the little ones always went to sleep in a warm bed with a full belly. There were many sleepless nights, but seeing the furry sisters get better every day, it was so rewarding.

"At first we just called them Black Kitty and Grey Kitty."

With endless care and love, the two sisters began to come around.

Their eye infection went away and the two furry sisters began to thrive.

Loving their indoor life. They are no longer feral!

The black kitten became quite attached to her human dad and fell asleep on him.

It's her favorite nap spot now.

At 4 months old the two sisters were flourishing! They named them Sinead O'Grayder and Siobhan Katya Plurabelle.

"You'd never know they were half-drowned and feral when we got them. They're lap cats now!" Christina said.

Initially the couple planned to foster the kittens until they were big enough for adoption, but the two sisters never left their rescuers.

Christina and her partner grew as attached to the kittens as the kittens were to them. There was no way they could part with each other.

"Siobhan plays fetch with little rubber dinosaurs. She cries if you don't throw the dinosaur."

"Sinead is mischievous and always getting into trouble. She goes crazy and leaps 3 feet into the air and kicks off the wall."

The two sisters were pulled out of flood waters one year ago. Their future was uncertain, but their rescuers never gave up on them.

Now they are grown up, happy and healthy. They tell their humans every day how loved they feel by giving them kisses and snuggles.

Related story: Feral Kitten Found in Pouring Rain, What a Difference After Just One