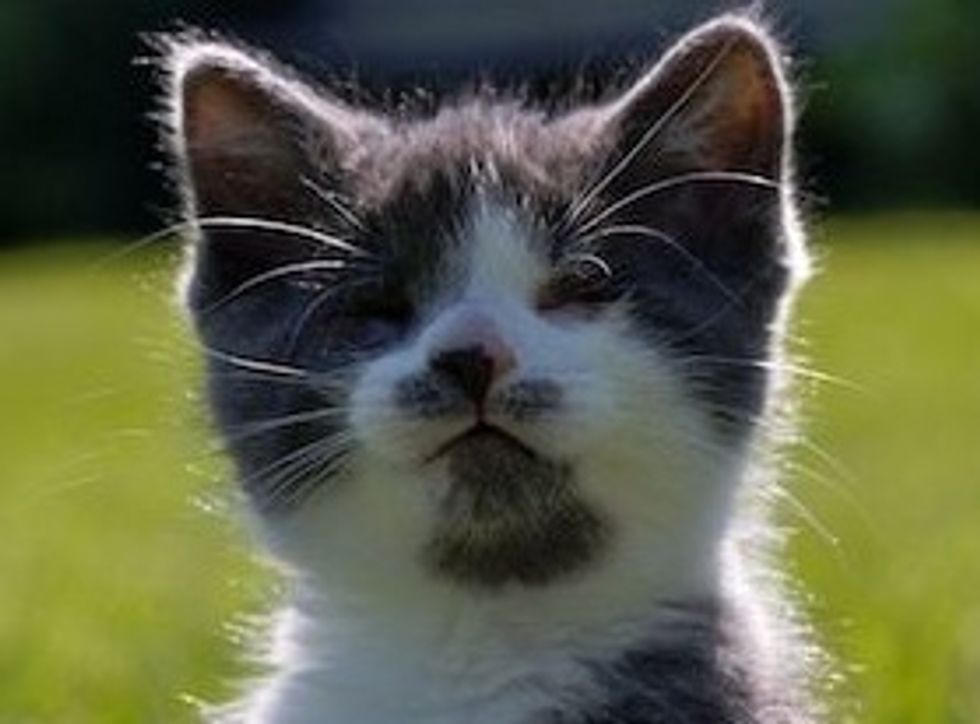 20 Amazing Stories of Rescued Cats from 2010

Happy New Year to all the kitties and humans. Here are 20 amazing stories of rescued cats from 2010.

This is an amazing story of a cat who was born without eyes, but never considers himself any different from other cats. To Jack, life is good and he surely lives it to the fullest. Click here to check out the story.

Craig Grant was interested in cats until he started looking after his son's cat. Through that experience, he learned so much about cats and fell in love with these wonderful creatures. Craig started rescuing homeless cats and decided to build a cat sanctuary for all his rescues. Check out the hero behind Caboodle Ranch.

Kitties Rescued by US Marines in Afghanistan

Three US marines, Brian Chambers, Chris Berry and Aaron Shaw, started a mission to help bring home the kittens they befriended while serving in Afghanistan. For soldiers who are on duty overseas, often time the only chance they get to cuddle is when they meet these stray animals. Check out this incredible story.

From Fear to Trust - Story of Meatie, the Feral Cat

When Caroline met Meatie for the first time, he was starving and needed help. As a feral cat, Meatie was not willing to trust humans and kept his distance. It took Caroline arduous work and patience to finally earn his trust. The process was long and difficult, but it was so rewarding at the end that it made everything worthwhile. Check out this heart warming story.

Kitty was rescued while a French couple was embarking on a journey to travel from Miami to Argentina. They found the  little homeless kitten and took her with them. Kitty bonded with the couple and became the first backpacking cat who travels across the borders with her humans. Click here to read more.

Before Ulysses was rescued, he was living near the highway for a long time. He got his name because of the trials he had gone through. When Linda Hill found the little black panther, she made up her mind to get him into a loving home that he deserved. Check out this amazing rescue story and how Linda won the trust from this ex-feral cat.

Friendship Between Sophie the Kitten and Simon the Dog

Little Sophie was found foraging for food in the garbage and was brought to a loving family where she met Simon a lovable Welsh Corgi. Soon after they met, Simon fell in love with the little Calico kitten and the rest became history. Check out this adorable friendship between Sophie and Simon.

Cat mama Zoraline and her baby Ziggy were rescued from being put down by Kimberly Jennery who took them into her home and gave them a second chance at life. Check out this heart warming story.

Jimi was found in a feral/stray cat colony behind a restuarant and brought to an animal hospital where Kelli was working on her internship. "I was first captivated by his cute little crossed eyes, and then I got to know his sweet nature and just had to bring him home." Check out this adorable story.

Nao-chan found two teeny little tabby kittens in a box near a pond while she was out on a jog. As an animal rescuer, it was second nature for her to bring these kittens to safety. Since then the kittens' new life has begun. Click to read more about this heart warming story.

Gumbo is an absolute treasure. He is an amazing boy who time and time again demonstrates that cats have ADAPTABILITY not DISABILITIES. Check out this incredible story.

Sicca and Her New Forever Home

Sicca may have had a rough beginning to her life, but she is blessed with a loving family and an angelic face that surely melts hearts. Check out this adorable story.

Rescue Story of Stitch and Mallow

Heather spotted tiny squirmy kittens in an abandoned building. It took her several days until she was able to trap them and bring them into a warm and loving home. Check out this beautiful story.

Momo the Kitty with a Big Purrsonality

Momo was found in a parking lot and when Anna saw him, he reeked the smell of a skunk. However, that did not bother Romeo, a loving fatherly cat who took to him right away and started washing him like a father to a son. Check out this adorable story.

Lacey was found wandering on the street, pregnant. She was brought into a shelter where she awaited her loving home. When Rose saw met her, she knew she would take her home. This is her sixth year at her forever home. Lacey surely has flourished. Check out this lovely story.

Little ginger baby was rescued from the rain. She was very cold, but was warmed by her new dad, a cat (who is also a rescue) and a dog. Check out this amazing story.

Mina was found in the laundry room by herself. She was born to love. Her family has fostered many rescued kitties and Mina is a great helper who always keeps on an eye on the kittens and makes sure they are safe and clean. Check out this lovely story.

Mishka is one of the 95 cats rescued by a local animal shelter and now he has blossomed into a sweet fluffy boy. Check out this beautiful story.

Story of Sonny the Stray

Sonny showed up at Tina's house when she just started her treatments for cancer. "He needed me as much as I needed him." Check out this beautiful story.

Story of Chihiro the Rescued Tabby

Chihiro, a cat that came from nothing, now thrives as the head of the household. Her hooman calls her the “wild one” because there is still a lot of feral cat in her, but Chihiro is also a lucky one. Check out this amazing story.