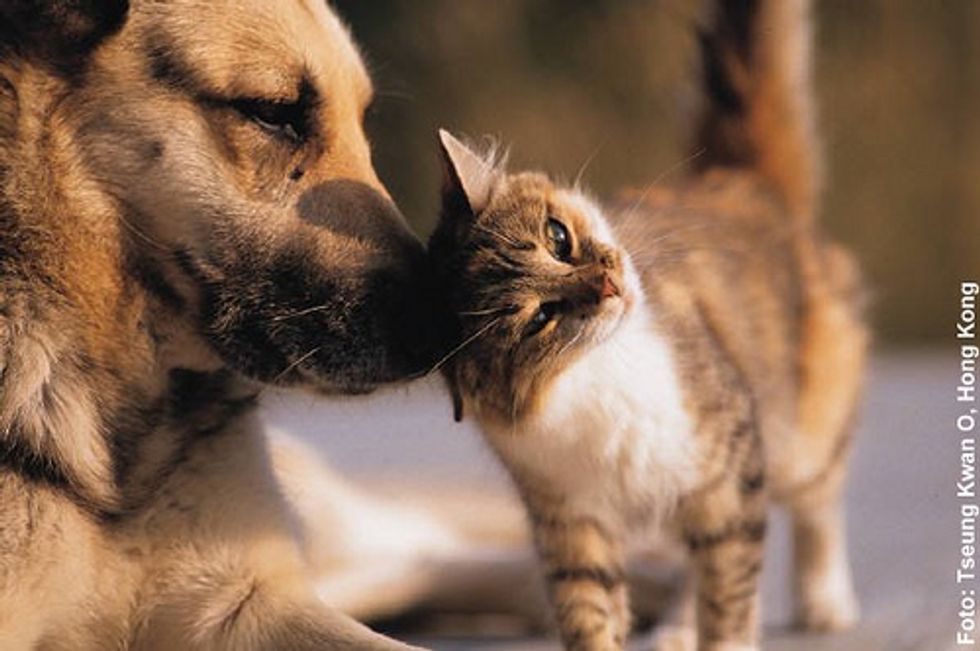 I have a 16 year old cat, one of three cats and a dog in the household.  This particular cat has started to defecate in inappropriate places.  Mostly in my bathtub but also in a cardboard box.The dog, a boxer, has been a somewhat recent addition to the family, only a year ago.  Also, we acquired a new kitten about the same time.  The 16 year old tolerates the kitten well despite his kitten rambunctiousness, but he despises the dog.I have been trying to figure out why the inappropriate defecating behaviour, and I have come to the conclusion that it could be stress related.  Our litter box is kept clean and it's only this one cat that is having issues.  The question is what do I do? How do I deal with it?  Am I right in assuming stress is the problem?

Thank you so much for coming to LoveMeow.com. I read your concerns and understand your frustration. You mentioned that you acquired the kitten and the dog about a year old. When did your 16 year old cat start his abnormal defecating behavior?

Older cats need more time and work when a new dog moves into the house. Dogs and cats speak different languages, so they will have to find ways to understand each other before they can trust each other. Kittens do a much better job with a new dog because they are very adaptable, but older cats may not fare so well since they are so used to their living environment and their established position in the house. Cats are not good at dealing with stress. Change of environment or an unfamiliar scent could shock them and cause them to panic. Proper introduction for the cat and the dog is very crucial. (Dogs and Cats can Get along, If introduced Correctly)

Cats rely on their sense of smell heavily to help them identify their surroundings and ensure their safety. An unfamiliar scent from a dog could throw them off guard, so it would be a good idea to help a cat familiarize with the new dog's smell before their official meeting. We can give the cat a towel that has been used to rub down the dog's body and leave it to the cat for a few days.

One of the possibilities that your cat is eliminating elsewhere could be that when he is trying to use the litter box, the dog or the new kitten is in the same room where the litter box is placed in. Cats value their privacy especially when it comes to elimination. If he is around with some body he does not trust, he may look for a place where he can acquire his privacy.

Spraying and defecating can also be signs of displaying dominance. Your cat may do that to send a message to the other pets in the house that he is the top cat in the house. In this case, you can use positive re-enforcement to help your cat to start enjoying being around the dog by giving him his favorite treat when he is near the dog.

Sometimes cats can be very persnickety about litter boxes. They may not use it if there is an unfamiliar scent besides being dirty, so having several litter boxes will help reduce their anxiety.

Finally, is your cat very vocal during bowel movements? If so, it could mean that your cat might be experiencing some sort of pain. Though stress could be the cause of this abnormal behavior, we cannot rule out the possibility that it could be a health issue. I think you should have your cat seen by a vet and let your vet know the behavior your cat has been showing.

Also, I would use disinfectants or a good enzymatic cleanser to clean any areas that he has soiled because the smell can cause the cat to return to eliminate again.

Cats are really good at masking their health problems or pain in general. However, their feline buddies are probably more keen at detecting what's going on inside him. It is funny that sometimes when you see a cat licking another cat's ear canal, it can be an indication of ear mites. Cats know each other's problem and try to help one another in a colony.