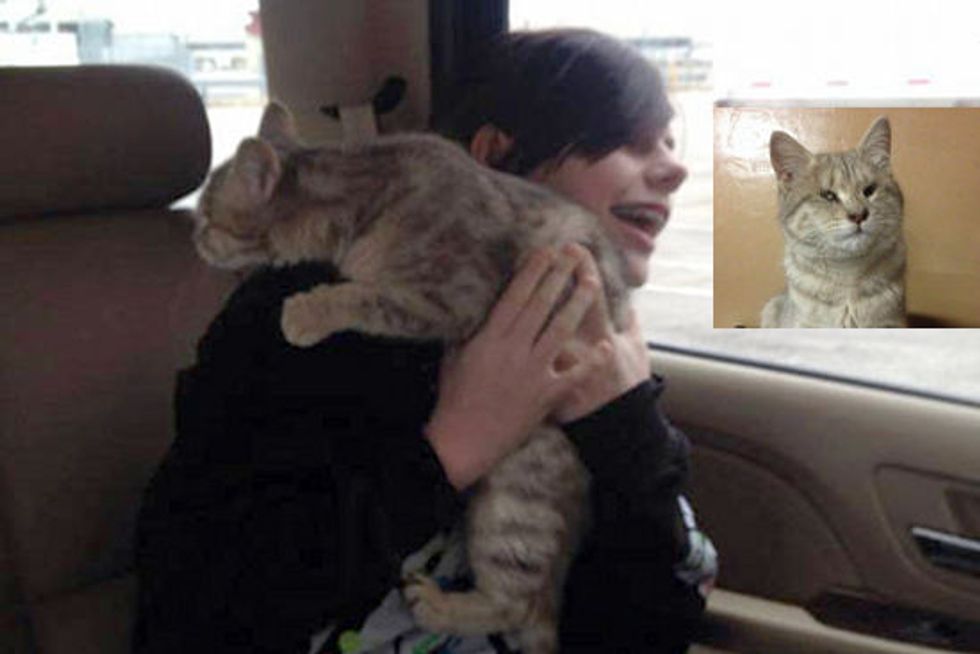 A blind cat found her soldier in Afghanistan. They started feeding her and grew attached to her. They named her Sockets.

The rescuer wrote: "I work in Gardez and live on an Army Forward Operating Base. I had been here a few days and noticed a grey striped kitten around where we lived. The kitten was cute and was always playing. I started giving it food, many people feed her. One day the kitten was on a high wall eye level. When I looked at her eyes there were none. Joking we called her Sockets.

Sockets plays and gets around like any cat. She climbs and runs around, but does it with no eyes. She is very friendly and likes getting petted. The eye sockets are a crusty mess, but the cat does not seem to be in any pain. She purrs just like any cat.

After I made contact with the rescue (Nowzad) we set a date for Sockets to go on her trip. We put her in the office for safe keeping. I took her a little time to get used to the place. I got a box and put gravel in it like a litter box, and she used it like any indoor cat. On the desk were 2 Afghan traditional hats, she made these her bed. She is one very smart kitten. - - Sockets has made her way from the FOB to the Nowzad clinic." (via Nowzad and SAC Fund)

Once she arrived at Nowzad, they gave her the needed treatment for her eyes, and she was a very happy kitty. With generous donations, they were able to gather enough fund to arrange a trip for Sockets to return to her soldier in America.

A blind cat found her soldier in Afghanistan. They started feeding her and grew attached to her and named her Sockets. "Sockets plays and gets around like any cat. She climbs and runs around, but does it with no eyes."

They wanted Sockets to have a wonderful life in a safe home in the US, so contacted Nowzad for help. Once Sockets arrived in the shelter, she was treated for her eyes and just kept purring along the way.

With generous donations, they were able to collect enough fund to reunite Sockets with her soldier in America. This is her on her way to her new home.