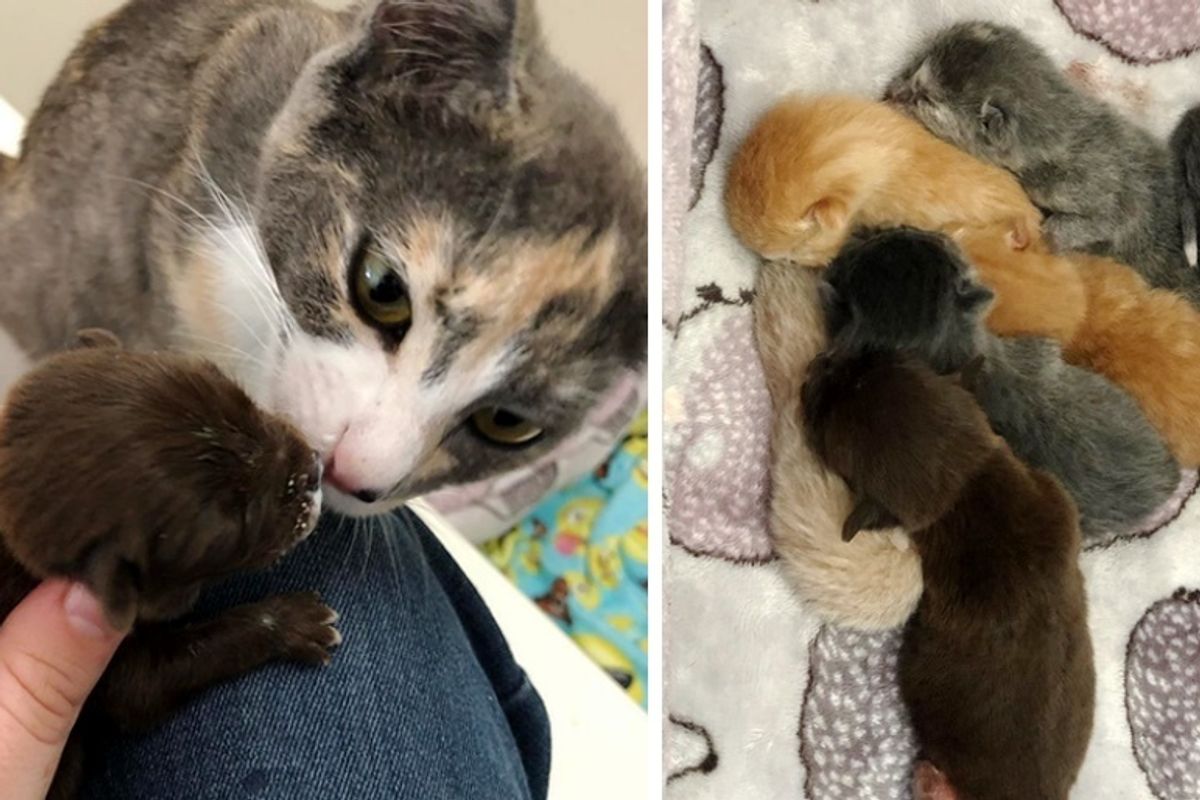 A rescued cat mother met a tiny orphaned puppy. She immediately took to him as her own.

Charlie the pup was brought to a shelter in California City, needing rescue. Wrenn Rescues quickly responded and arranged transport to get the baby pup to Oaks Veterinary Urgent Care in Agoura Hills so he could receive medical attention he desperately needed.

At just a few days old, Charlie came with an injured leg, which will require surgery in the future. He was given antibiotics to fight off infections and a lot of TLC after the ordeal.

Jenifer Hurt, an experienced foster for neonatal kittens, took him home. "I've been bottle and tube feeding him for the past week. The most challenging part was trying to figure out how to care for him and what he needed," she told Love Meow.

"This is my first neonatal puppy so Dr. Carin Ferdowsian and Dr. Rachel Wallach have been teaching me a lot about how to properly care for this little guy."

Charlie was fed every three hours and given pain meds and antibiotics. After overnight feedings, the little puppy gained a full ounce and began to perk up.

After getting the mama vetted, they decided to try putting little Charlie with her to see if she would accept him.

Having a surrogate mom does wonders to an orphan's health and development.

The cat mom started licking her new canine baby and instantly loving on him as her own. She wrapped her arms around him as he fell asleep on her.

"She is such a good mom. She accepted him right away. Charlie isn't nursing on her too much so I'm still having to bottle feed but he is absolutely loving the company," Jenifer told Love Meow.

The little pup fit right into the litter and started snuggling with his new siblings.

After each bottle feeding, Mama comes right over to wash his face, making sure he is well taken care of.

Little Charlie is so happy to have a doting mom who looks after him every step of the way.

Charlie had a great night sleep with his little family last night, in a purr-filled cuddle-puddle.

Today, he started opening his eyes to see for the first time.

With help from his feline family, Charlie is thriving in foster care.

Cat cares for orphaned puppy as her own youtu.be