A woman took a chance on a tripawd cat who was too scared to leave his cave at the shelter and helped the kitty find his supurr power! 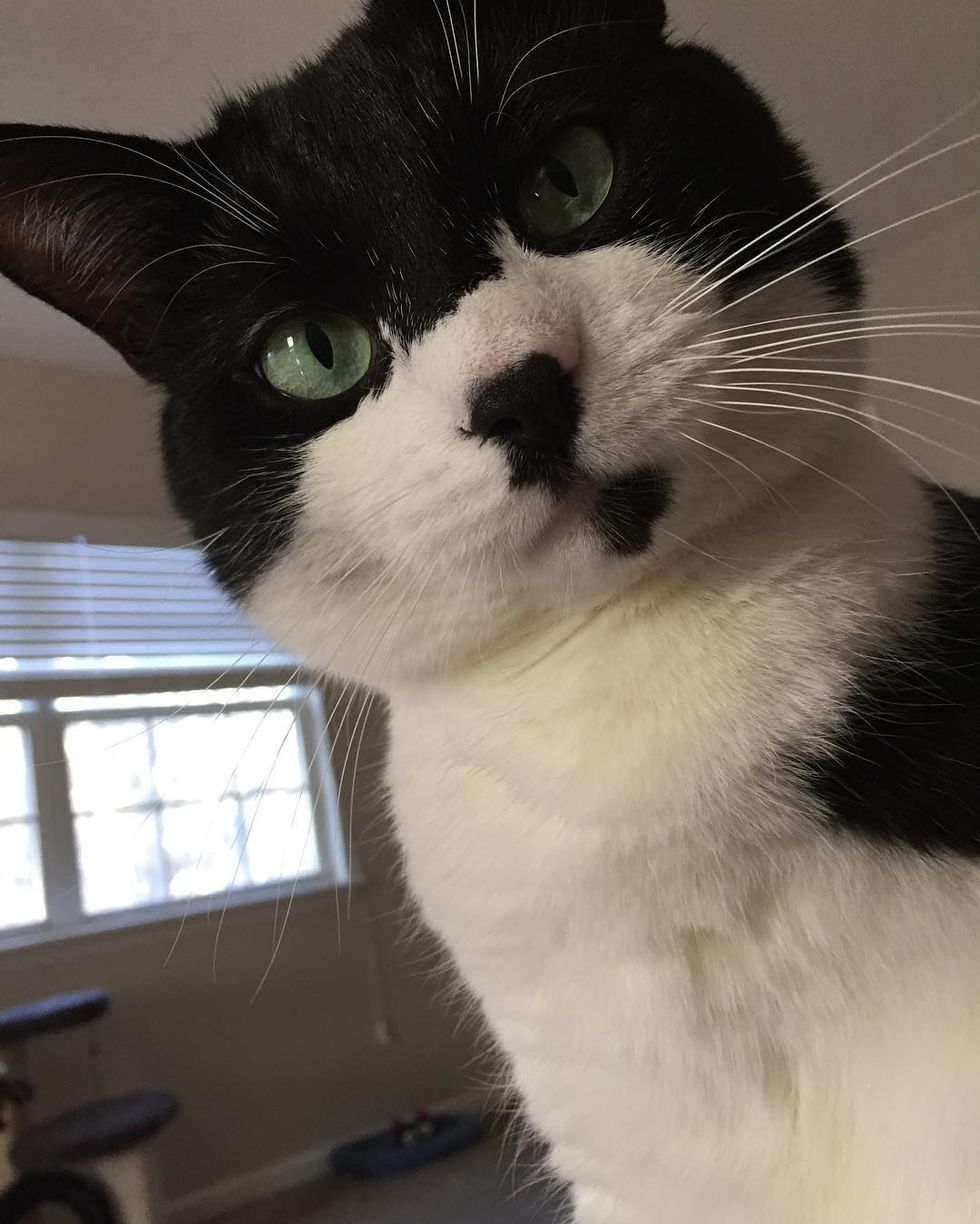 The first three years of Batman's life were a mystery. He was found a tripod by Animal Control in Wake County, North Carolina in May 2015. No one knows what happened to his missing front leg.

Batman was miserable living in a cage. Stress got the best of him, and he was so scared that he ripped out most of his claws.

When SPCA of Wake County learned about his plight they took him in so he could live in a cat room instead of a cage. His paws healed up and claws grew back, but Batman was still very timid and spent most of his time hiding in cat caves, trying to be invisible. As a 3-legged cat, he had a hard time fitting in with other kitties in the room. 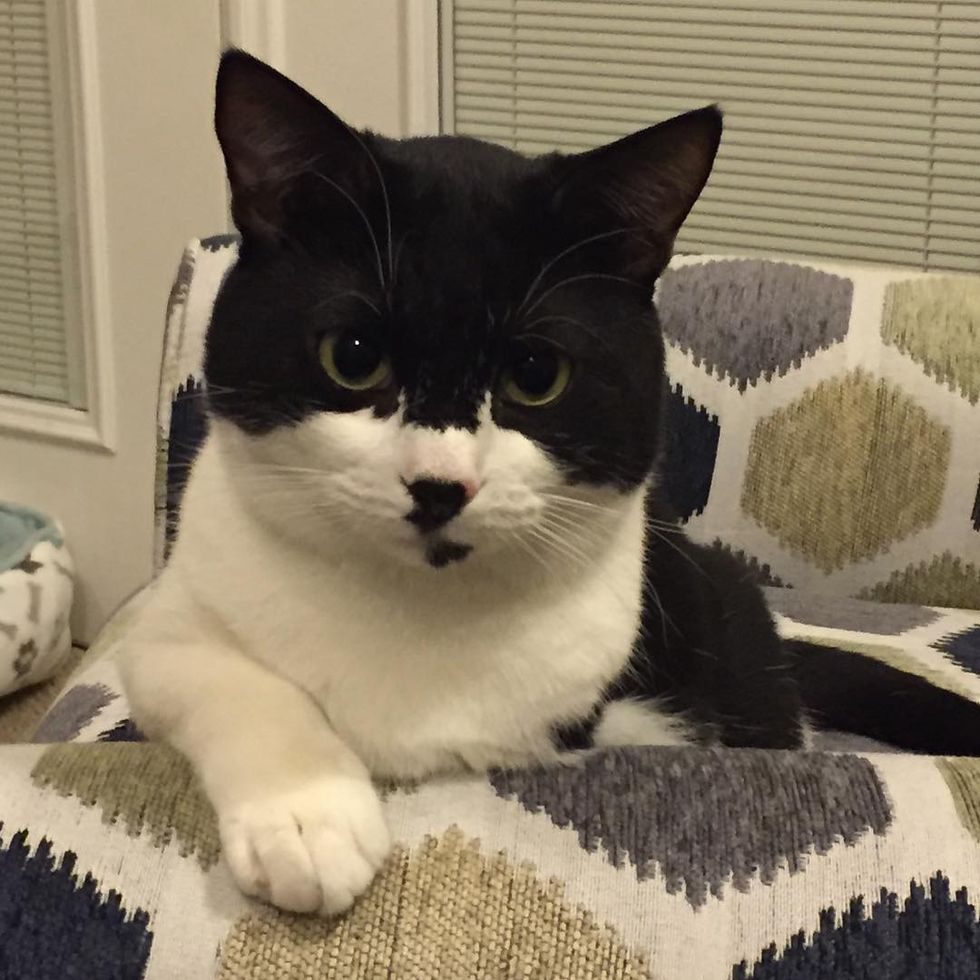 While he was hiding in a cat cave as usual, someone walked into the room and started playing with the kitties there.

Lauren was at the shelter looking to adopt a cat. She didn't notice Batman at first as he was in his secure hiding spot. But after playing with the kitties there and didn't connect with any of them, Batman made his move. 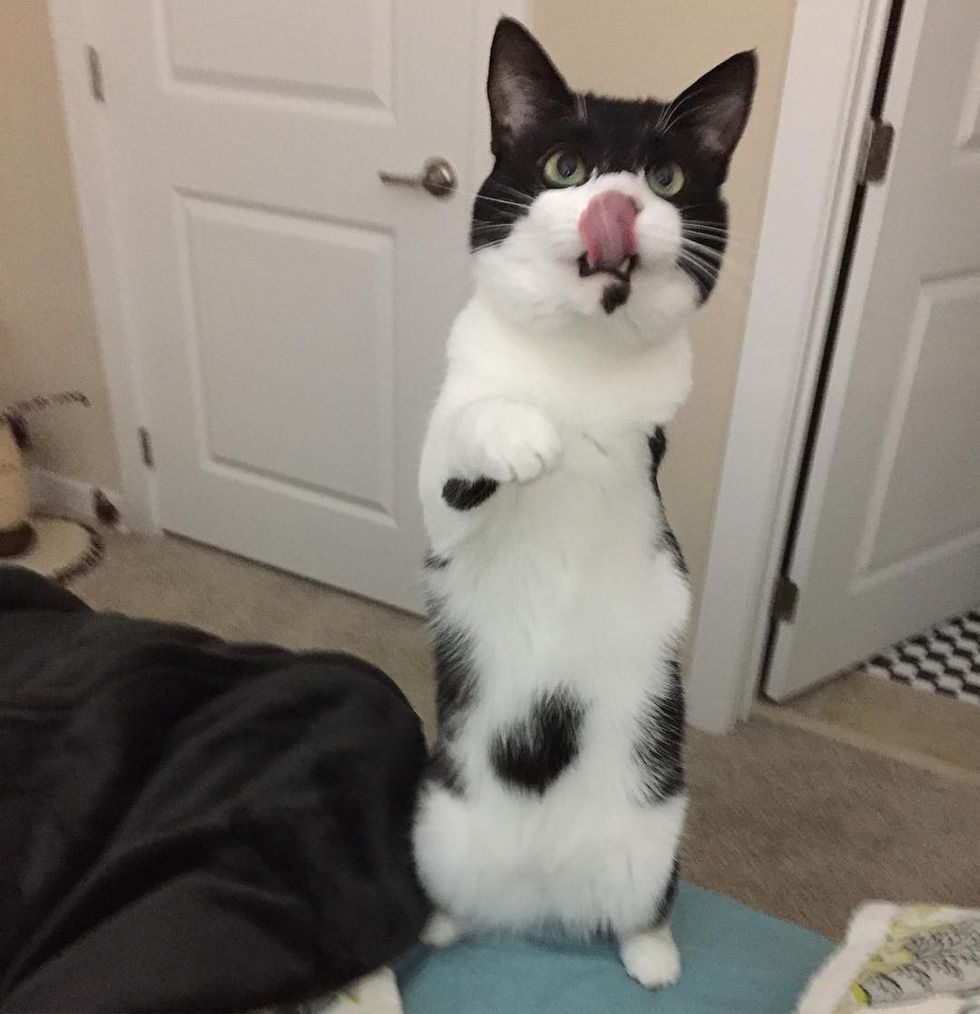 He poked his head out from the cave, and she immediately walked over and petted him. It was love at first sight. Batman decided to step out of his cave, and that's when Lauren noticed his missing leg.

The kitty mustered enough courage to come out and eat, but was immediately intimidated by another cat. It broke Lauren's heart, and she knew right away that she had to take him home. 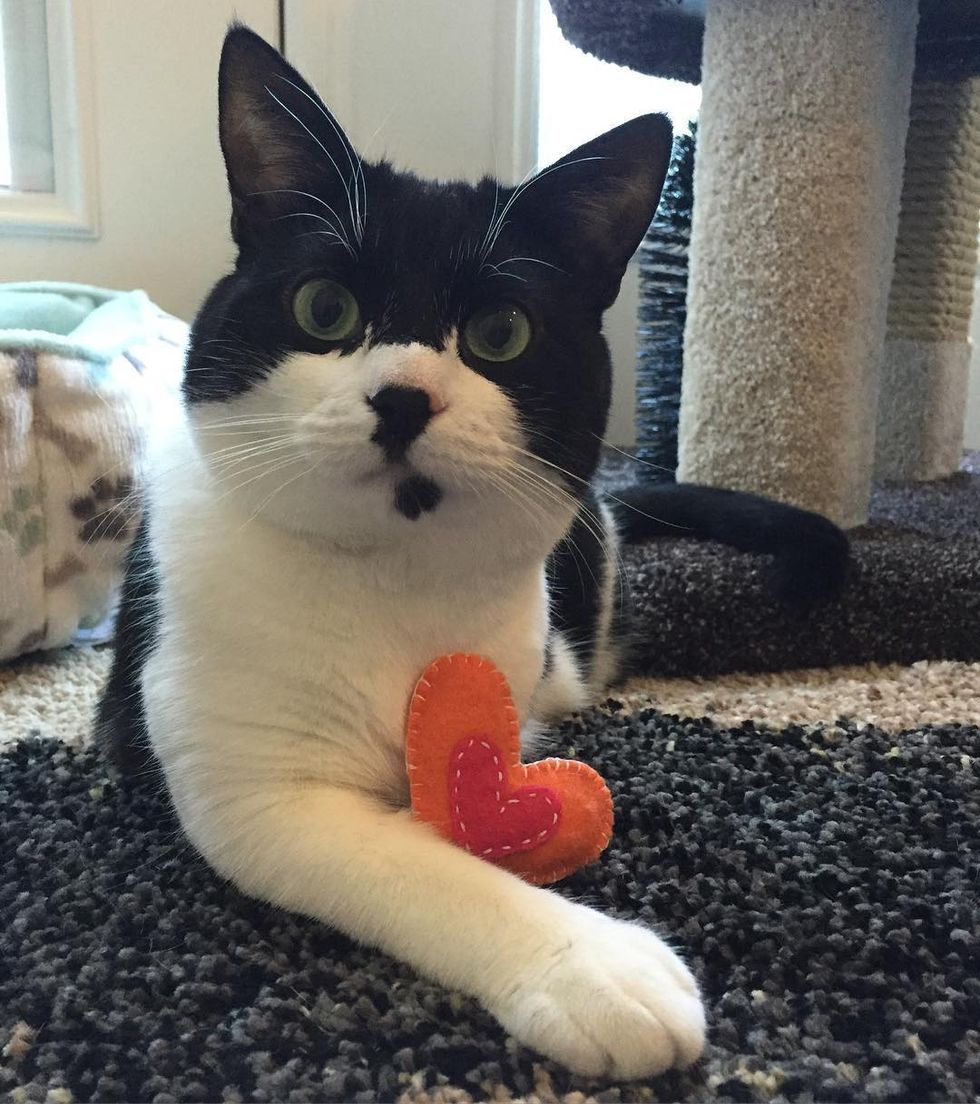 "Never again will you be bullied. Even if you always hide, and never want attention, you are mine forever. No matter what.", Lauren said to Batman.

That day Batman left the shelter for good. 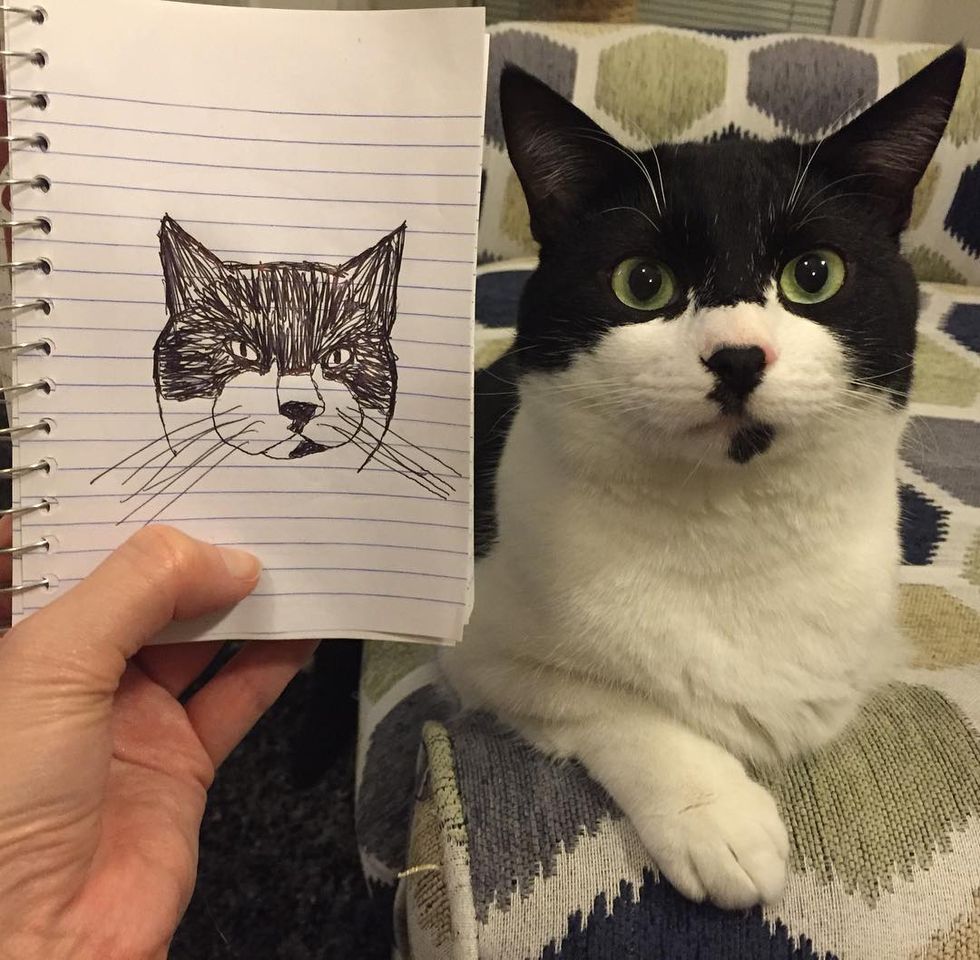 He was crying loudly while he was on his way home. Once he arrived, he immediately took refuge under the bed and stayed there for days.

Lauren gave him all the time that he needed to get accustomed to home life. With lots of love and patience, Batman slowly came out of his shell, and after a few months, he began to act like a normal cat, and made up for his lost kittenhood. 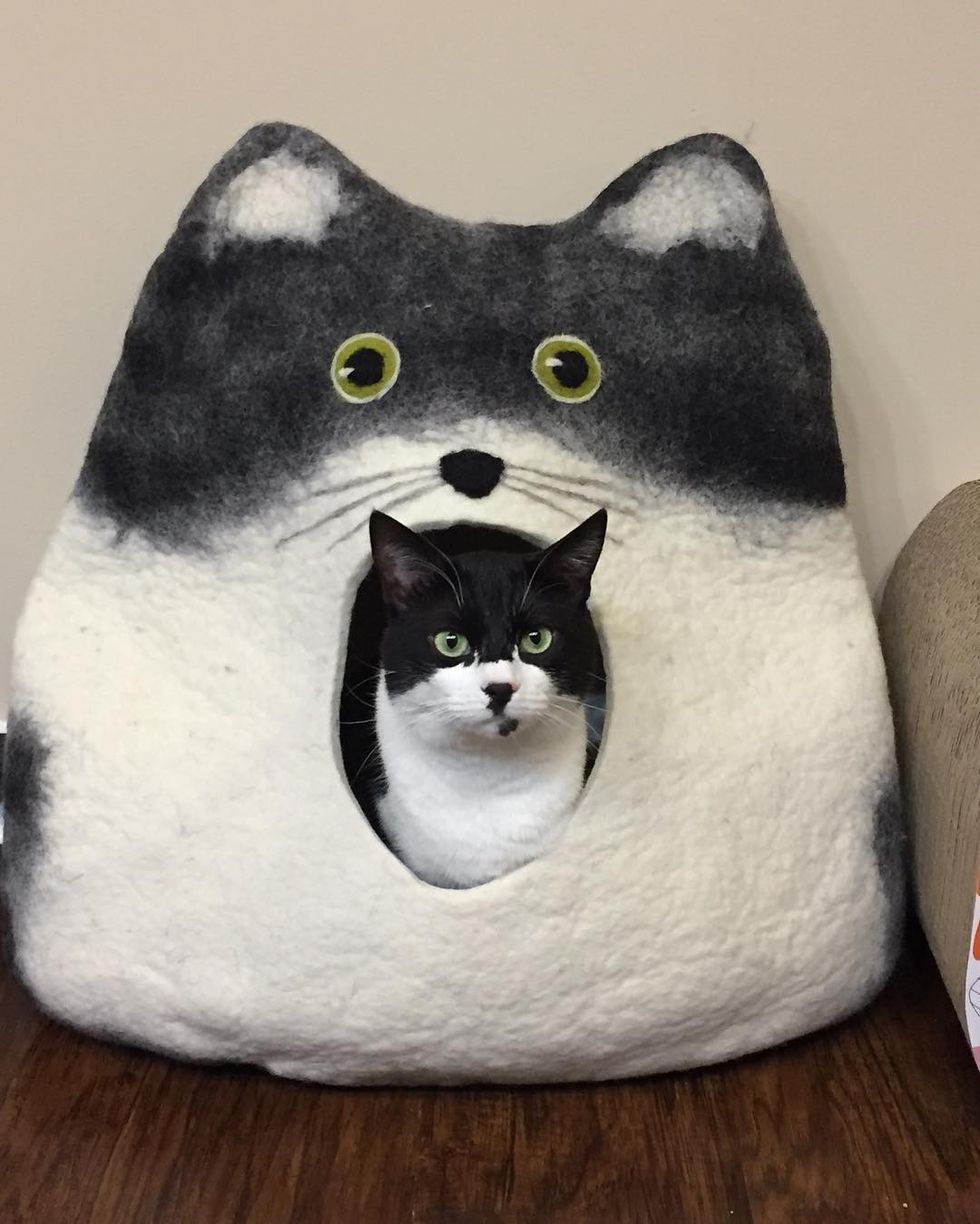 This is Batman and his lookalike. 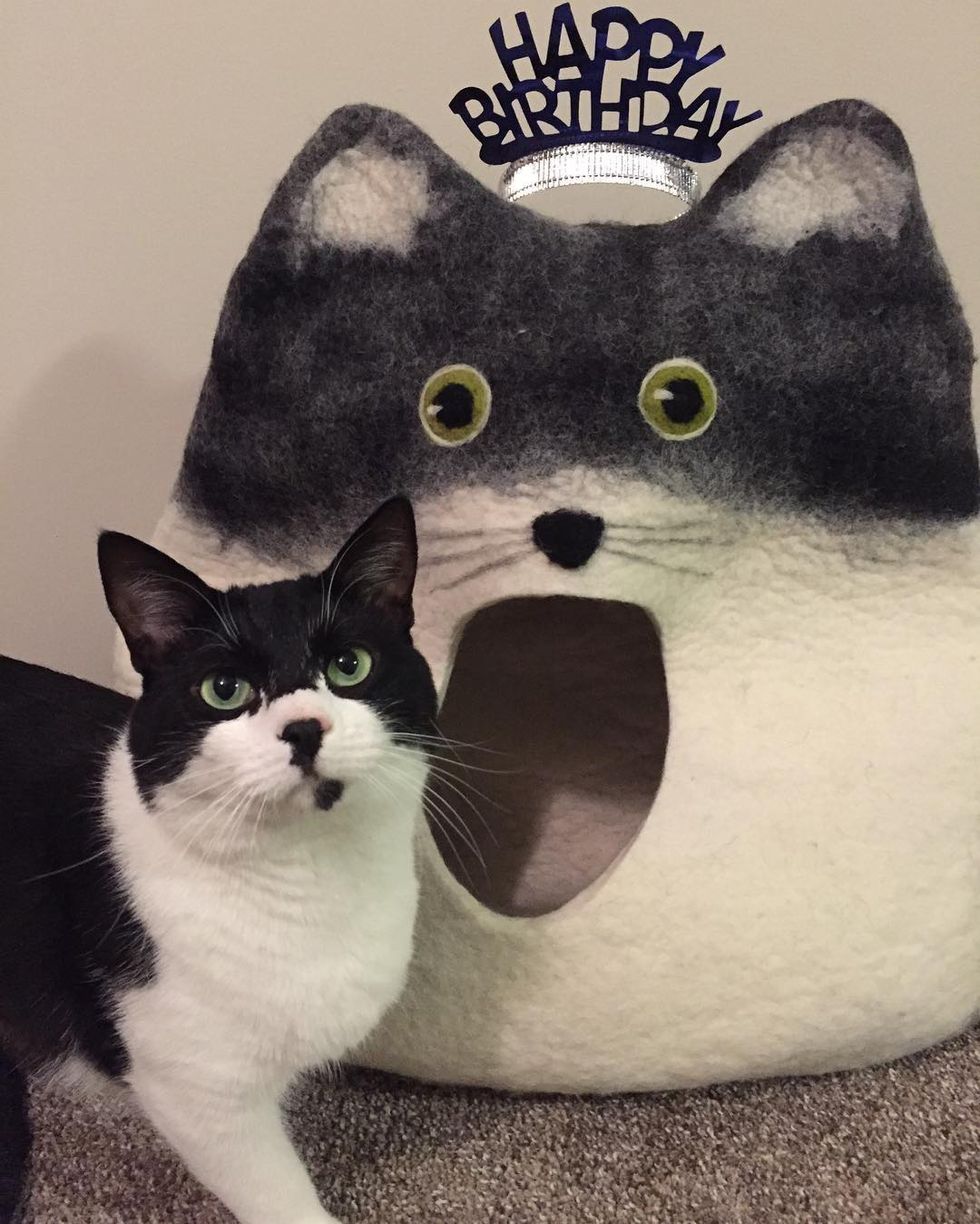 Batman "loves running around the apartment, chasing string and the laser pointer, jumping up on the window sill to neighborhood watch, and even running up and down the stairs."

You'd never know he is missing a leg. Batman is just like any other cat! 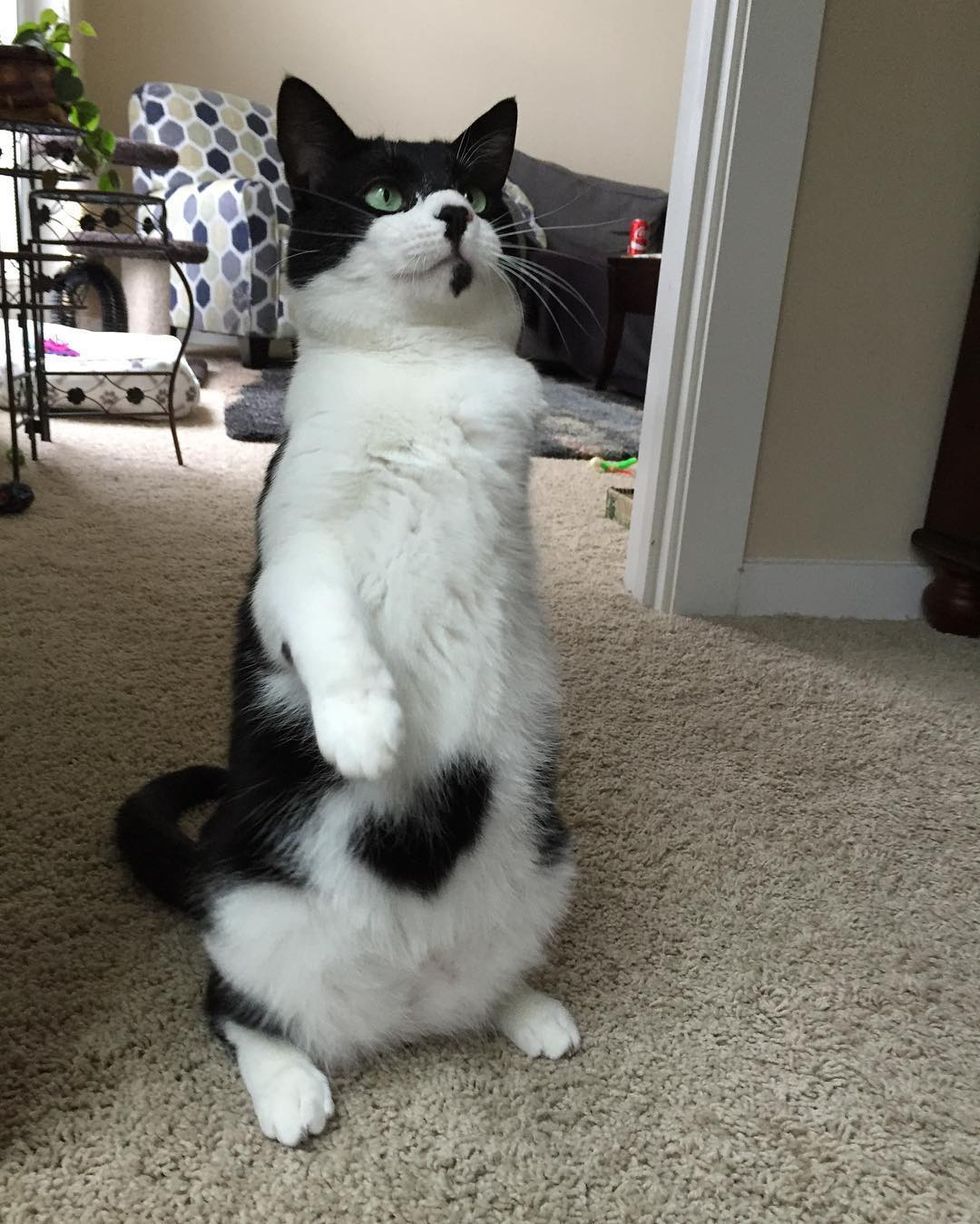 "Tripod cats are just like any normal cat, and should not be overlooked when adopting. There is nothing he can't do," Lauren told Love Meow. 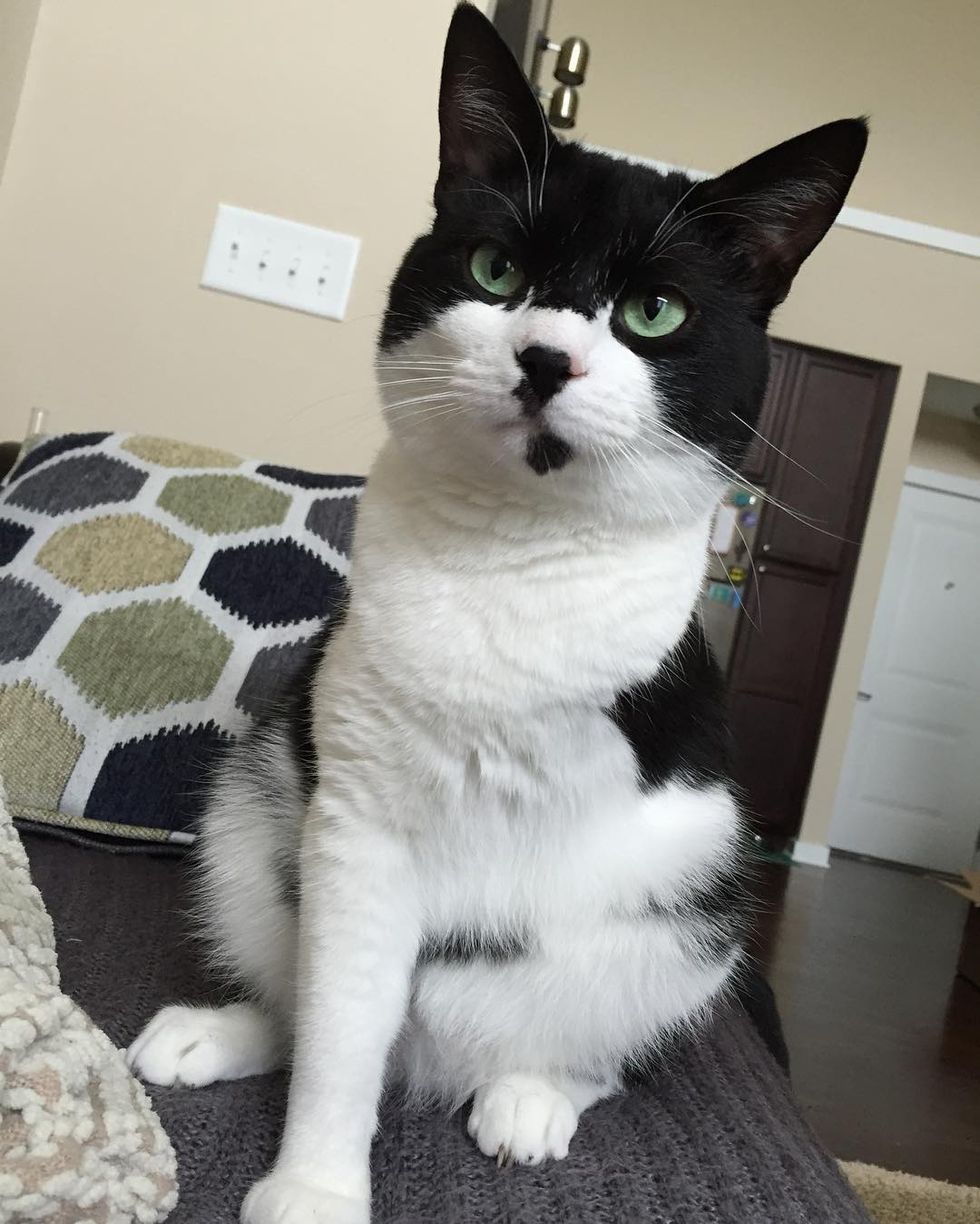 "Batman is a very sweet mama's boy, and loves sleeping on his Human, bird watching, sunbathing, and shrimp treats. He's also very smart and knows the word 'no.'

"He still gets scared easily, and hates lawn mowers and storms, but he's come a long way since I adopted him two years ago," Lauren told Love Meow. 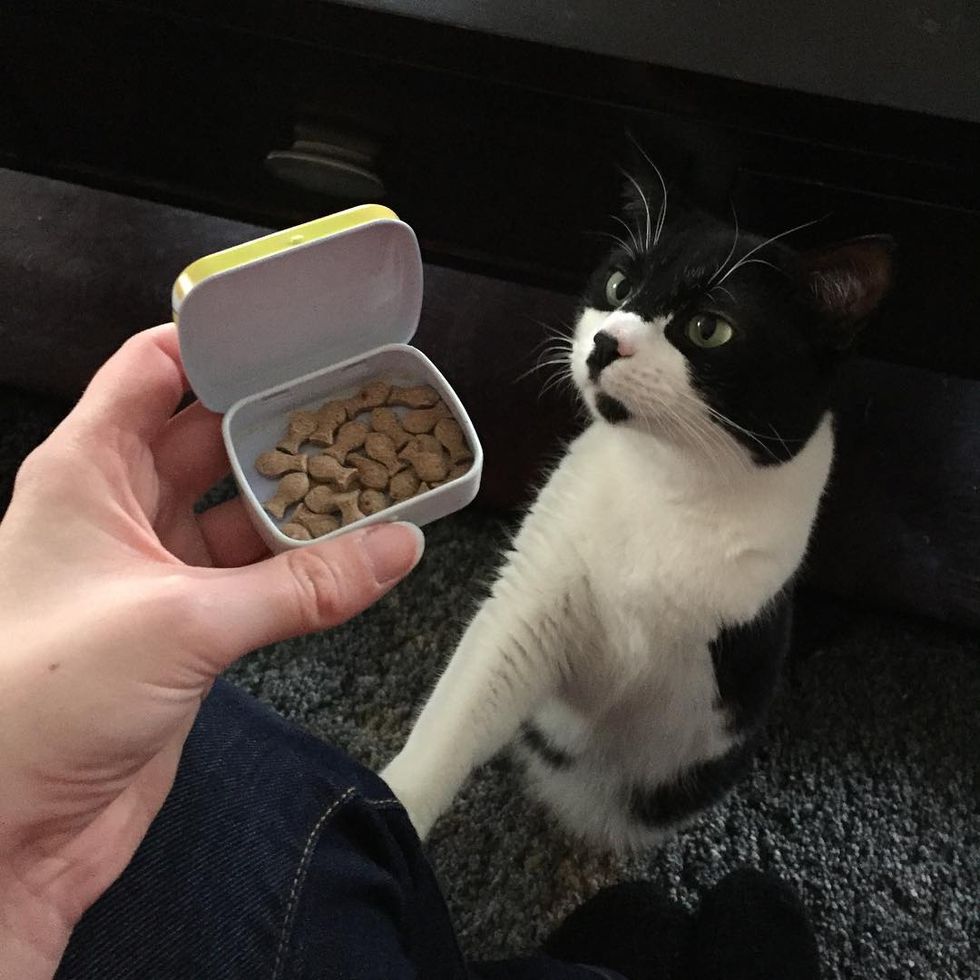 Batman will be five years old next month.

He's the supurr hero in the family, guarding and protecting his human every single day. 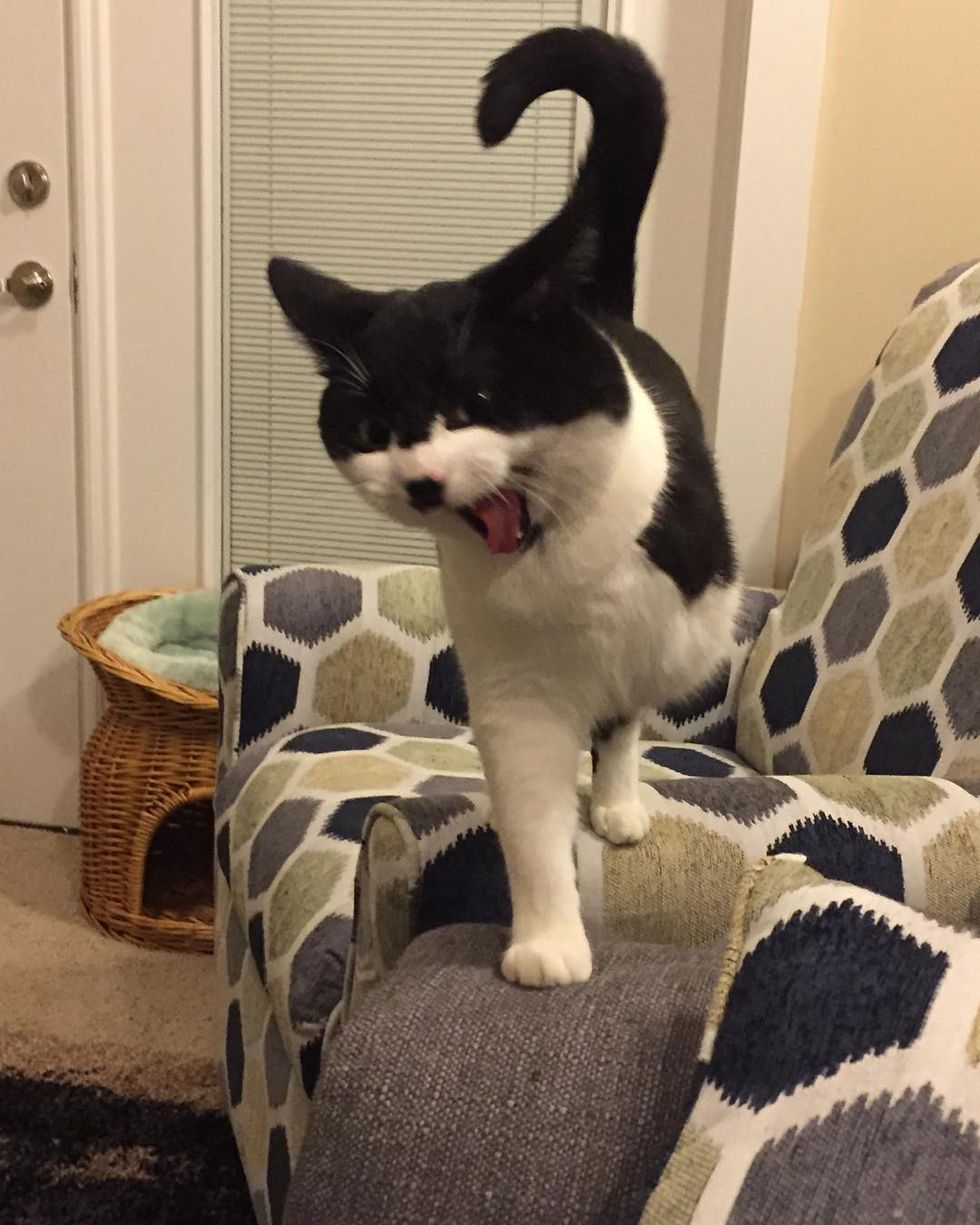 The once frightened, lost shelter cat has blossomed into a happy, playful tuxedo boy, full of personality and quirks.

Now nothing can stop Batman from loving life. The 3-legged kitty has found his supurr power to love and protect his forever human, who gave him a place to call his own. 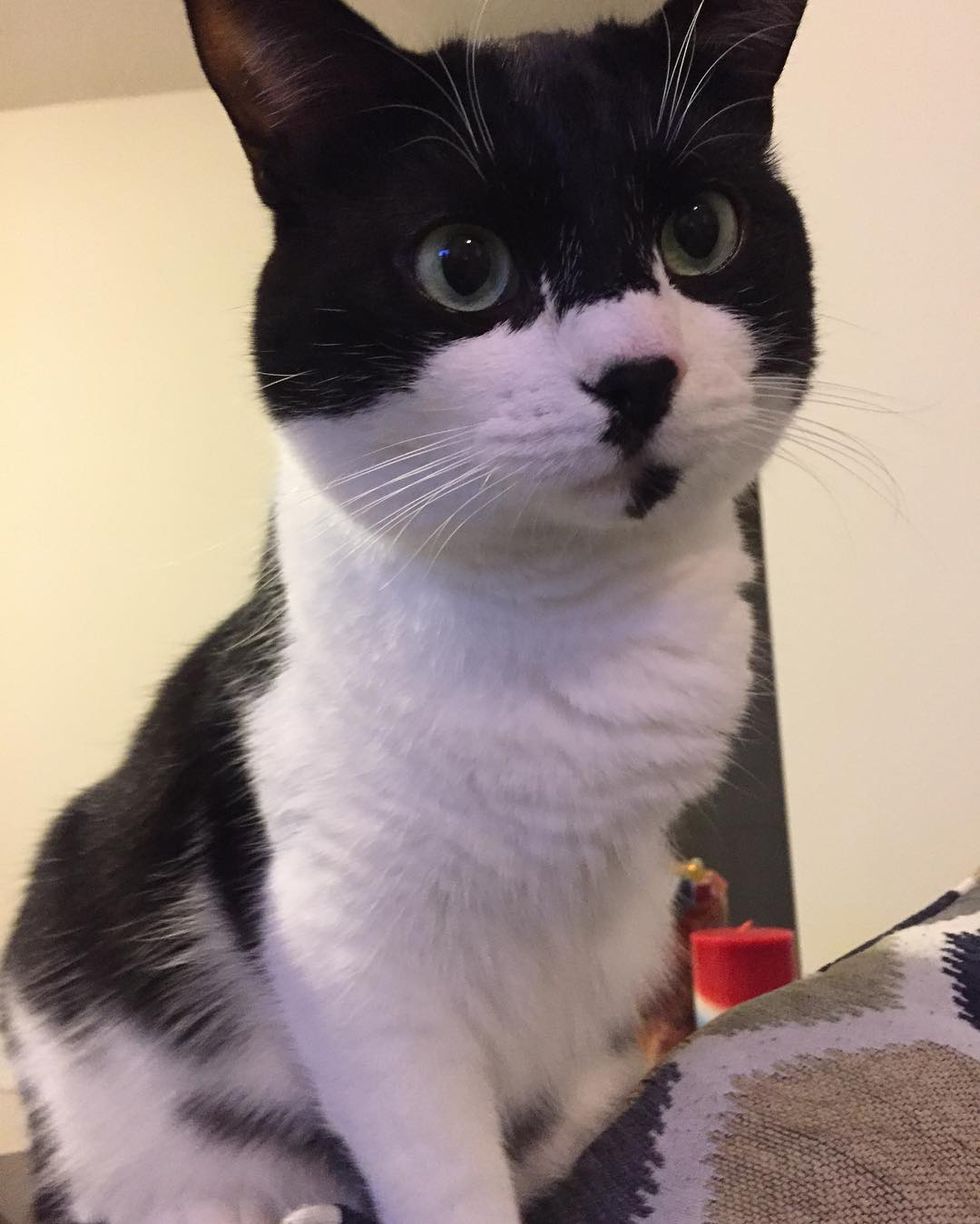 Batman's cute stare down and a meow!